This one is another that walked off my table at a gun show (the last gun show I'm doing for a while) before I could make a sheath or get good pictures and dimensions.

It's kind of a skinner shape, though there may be a bit much point for that. The blade is under 4" long, with a fairly stout spine that tapers distally to the point. The knife is forged from 3/4" round 5160, filed bevel, triple normalized, triple hardened, triple tempered, and shaving sharp. 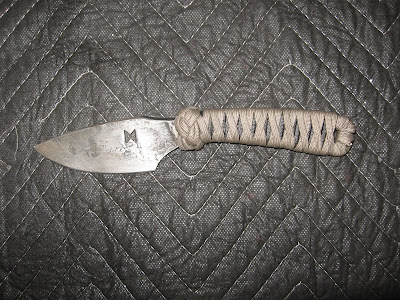 The handle is parachute cord, with black for the underlay, desert tan that has its core stripped out so it lays flatter for the overlay, and desert tan with the core intact for the two-strand Turk's head knot. The wrap is impregnated with Minwax Wood Hardener to make a composite material in place.

The fellow who bought it looked at all the knives and said they were going to look around the rest of the show and come back, which usually means you never see the person again. He did come back, though, and before sending the knife with him I checked to make sure it was properly sharp by shaving a patch of hair off of my hirsute forearm. He was surprised; he said he had not thought it was that sharp when he was looking at it before. :D
Posted by Helm Enterprises, Forging Division at 9:48 AM 1 comment:

Three knives for U. S. Marines

These will go in the mail on Monday. They were made for three current members of the USMC. 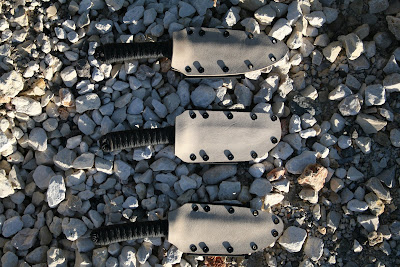 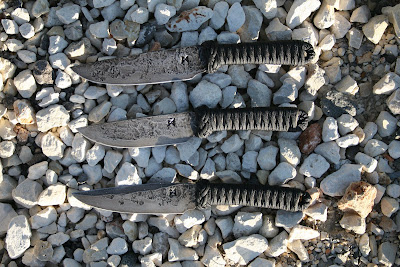 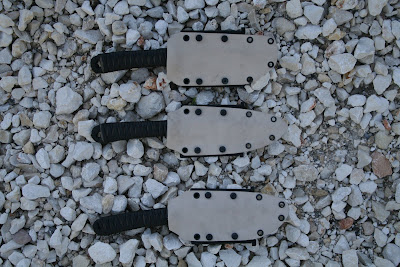 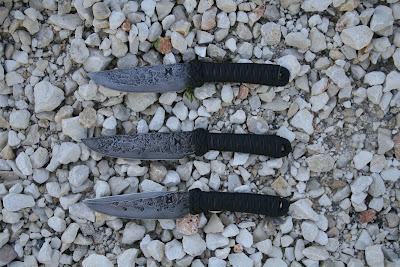 They're forged from 3/4" round 5160, filed bevels, triple normailzed to refine the grain, triple quenched in veggie oil to harden, and triple tempered for toughness. The handle wraps are paracord impregnated with Minwax Wood Hardener with desert tan for the underlay, black wth its core stripped out for the overlay, and black with the core intact for the two-strand Turk's head knots.

The sheaths are desert tan Kydex with two MOLLE locks each.

Edges are shaving sharp, including the top edge of the bottom knife. In fact, it drew blood already because someone assumed it was a false edge and ran their finger along it before I could stop them. :)

They've been being worked on since I started playing around with this paracord wrap and have been re-wrapped three times. I'm happy with them now, though I will continue to tweak my method as I do more of these wraps. One of the Marines who will be recieving a knife got to handle them one handle wrap back, several months ago. I asked him if he had any comments, and this was what he typed:

"a wonderful blend of both a utility and tactical blade mixture." "perfect for cutting a MRE box open or a cutting a bad dude if needed :) "

Looks like these blades will probably accompany them to some exotic locales.
Posted by Helm Enterprises, Forging Division at 5:30 PM No comments:

I taught a three-day knifemaking workshop a couple of weekends ago and one of the students bought this from my inventory of waiting-to-make-sheaths-before-posting-pics blades. While we were waiting for the Minwax Wood Hardener to dry on our paracord handle wraps, I took the opportunity to demonstrate making a simple foldover Kydex sheath. 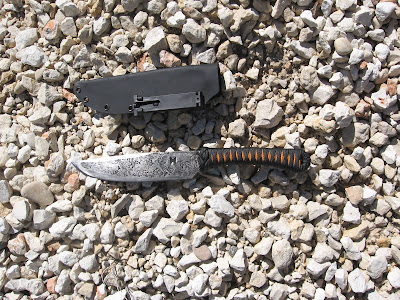 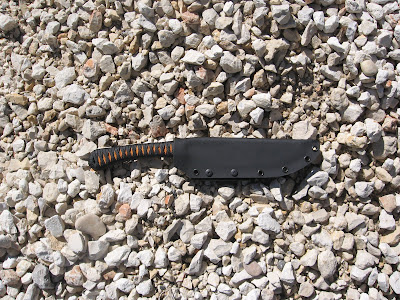 The knife was forged from 3/4" round 5160, bevel and false edge were hand filed, and the blade was given my typical triple normalize/triple harden/triple temper heat treatment. The handle is a bit longer than I typically do, and would make for good extended leverage for chopping. The underlay is a bronze/gold paracord, with a black paracord overlay and two-strand Turk's head knot, all sealed with Minwax Wood Hardener.

The customer is a professional knife sharpener who works from home and also a member of a primitive skills group, so he should have an appreciation for a quality blade. :) He kept picking up different knives in my inventory box and liked them all, but always gravitated back to this one. It was shaving sharp when he got it, but I'm sure it has his own preferred edge on it now.
Posted by Helm Enterprises, Forging Division at 11:38 PM No comments:

This was made for a knife in the hat exchange, or KITH, over on Don Fogg's forum. The idea on this KITH was to make a blade that was either mythological (though myth could be of modern and even personal manufacture) or tribal in aesthetics. I was originally planning a forge finished integral socket bush sword with a La Tene-style blade inspired by Robert E. Howard's "The Valley of the Worm", but time drew near and I came across a style of blade from the jungles of Thailand that really caught my eye, and I went with that instead.

The blade is approximately 13" long and 3/16" thick, forged from 5160 and given my typical triple normalization, triple quench in canola oil, and triple tempering cycle heat treatment that I use for 5160. Here's what it looked like post-hardening and pre-tempering: 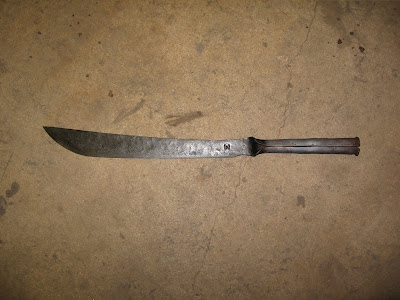 After tempering, cleaning off the oil, and wrapping the handle with hemp and tying two-strand Turk's head knots in cotton: 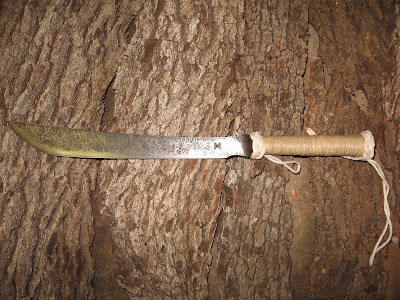 After sealing the wrap in black shellac: 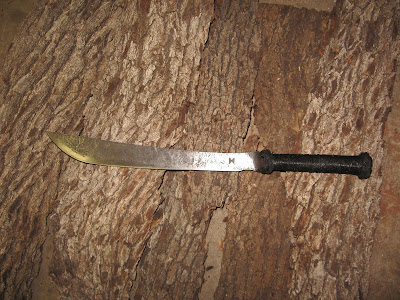 And after sharpening to shaving sharp, 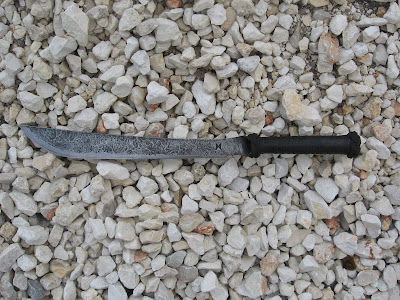 It's on its way to its new owner, Scott Roush, who makes awesome knives.
Posted by Helm Enterprises, Forging Division at 10:39 PM No comments:

This one went out today to a retired SWAT officer who works at a military school and does survival training with the cadets, the Boy Scouts, and Venture Scouts.

He wanted a similar pattern to the SERE knife I made for the airman at the beginning of the year. I forged 3/4" round 5160 into a blade approximately 8" long with a spine 1/4" thick and a cross section that tapers from the spine down to the secondary bevel (or as some folks call it, the primary bevel. :D ). Essentially a full flat grind except that it's forged and filed instead of ground.

You can see how closely it was forged to its final dimensions. Not a whole lot had to be ground away to clean up the profile and not a lot had to be filed to complete the primary bevel. 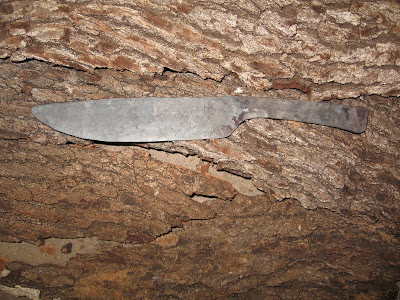 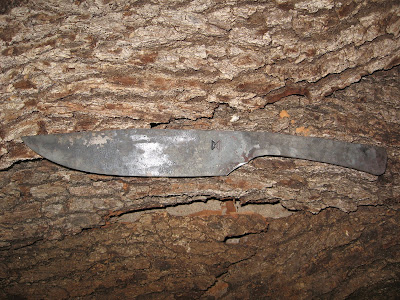 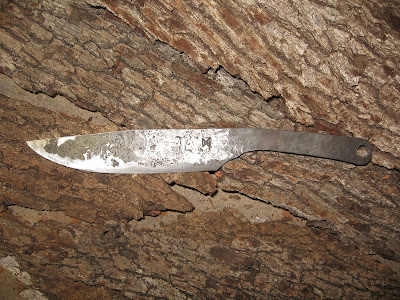 After my typical triple quench in canola oil and triple temper cycle heat treatment I use on 5160, I cleaned off the oil and cut out a slab of leather for either side of the handle and cut a hole to match the anchor hole drilled through the tang. A little patience, a little tape to temporarily hold things in place, and I started wrapping the hemp cord around the leather. It anchors at the end of the handle through both the steel and the leather. Then I tied the two-strand Turk's head knot a the front of the handle using black cotton cord. 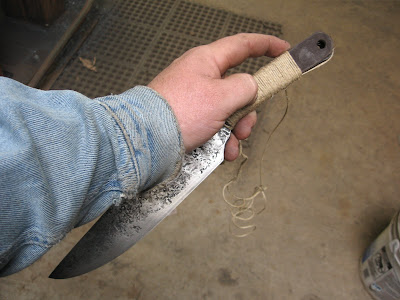 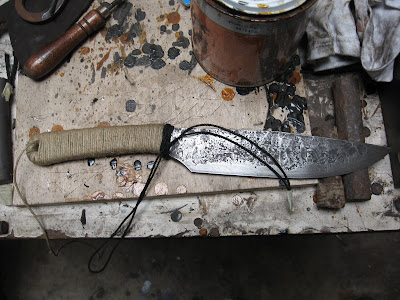 And then plenty of amber shellac to seal things and create a natural composite material in place on the handle. 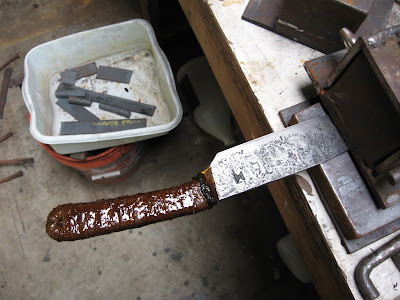 After the shellac was nicely dried and hardened, I sharpened it to shaving sharp (giving it its secondary (or primary :D ) bevel. Here's what it looked like right before being packed away and dropped in the mail. 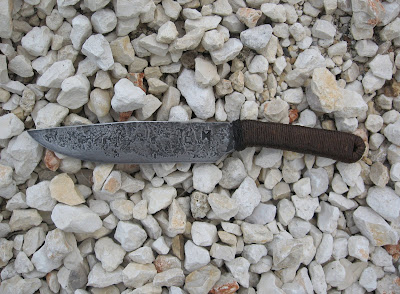 I would consider this to be part of my Primal/Tactical lineup, but leaning a bit more on the primal side of things.
Posted by Helm Enterprises, Forging Division at 9:13 PM 1 comment:

This one got picked up by a member of the Hoodlums forum at the local monthly gun show before I could get any decent pictures of it, but I was able to snap this one before handing it over. 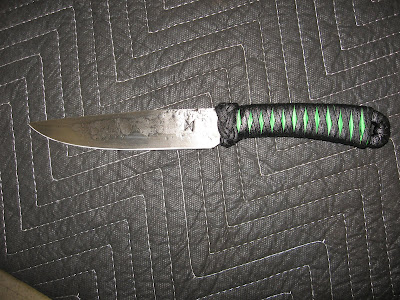 This is a light and fast one, though the weight is balanced just forward of the Turk's head knot. After I made this, I thought about it in comparison with the Fairbairn-Sykes as a fighting knife, and I have to say I would much rather carry this pattern if I had been a British commando in WWII. I would make the false edge into a fully sharpened clip and add a double guard for such duty.

This is forged from 5160, triple normalized, triple hardened in canola oil, triple tempered, shaving sharp. The usual. The handle is green paracord for the underlay and black paracord stripped of its core for the overlay and with core intact for the two-strand Turk's head knot. It's been impregnated with Minwax Wood Hardener to make a solid handle.
Posted by Helm Enterprises, Forging Division at 10:37 PM No comments:

See you in Atlanta!

I just got my table number for the Blade Show in June in Atlanta, Georgia.

I will be manning table number 4CC. This will be my first time there, and I'm excited! I have been working on some goodies to take along, and will be focusing more and more on that as June approaches. And of course I will be posting pictures of everything here and on the various knife forums that I frequent.

If you're at the show, stop on by and say, "Howdy!" :)
Posted by Helm Enterprises, Forging Division at 10:40 PM No comments: