It was the best knife show I've done, and it flew!  I didn't get to get around to talk with more than a small handful of the folks I wanted to, and sold all but three pieces at the show.  Those three were all claimed before I made it back home.

It was the biggest Blade Show yet.  The first year I was there, a large margin of empty space surrounded the tables.  The year after that they pushed to the outer walls.  This year they had booths in the foyer out front.

I haven't done a show yet where I didn't end up putting the final edges on in the hotel room. 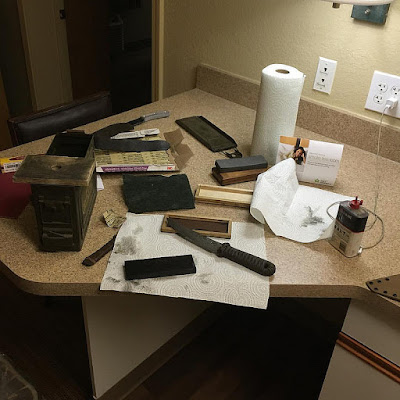 It was my buddy and fellow Forged in Fire champion Tobin Nieto's first time to have a table at Blade, and he, of course, made it entertaining.  My loverly bride holds a glaive that he made, and he has my sword.  You always need an eye-catcher on your table, and these are ours. 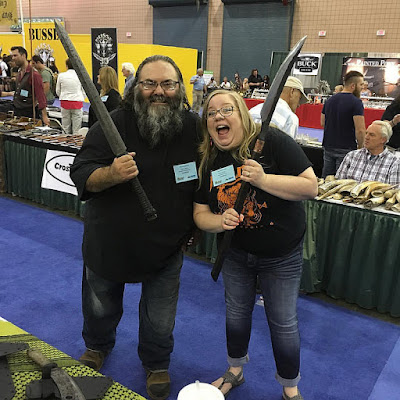 Always enjoy it when Dan Keffeler comes by.  Among other things, he had a Super Assassin with him. 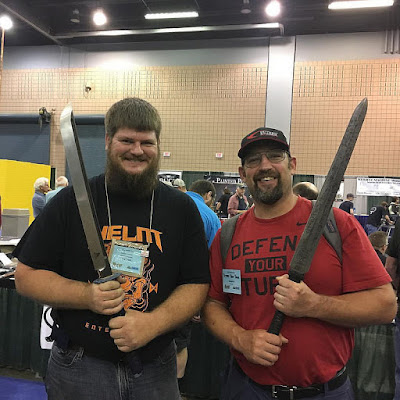 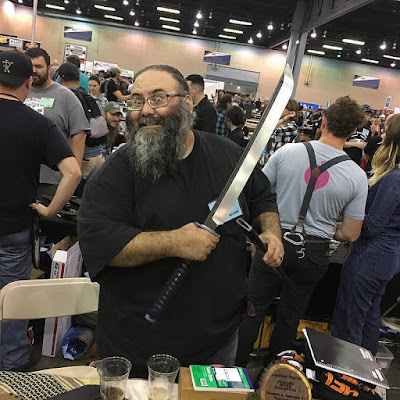 This fellow bought several blades from me, including the Ludicrously Oversized Bowie. 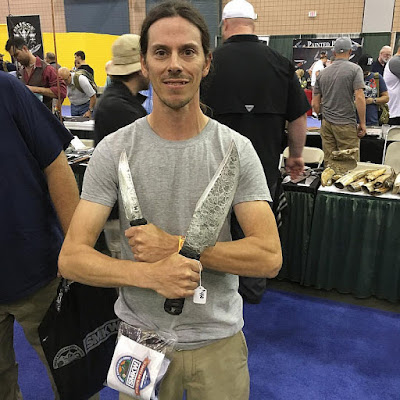 Got to meet Ryu Lim, fellow Forged in Fire champion. 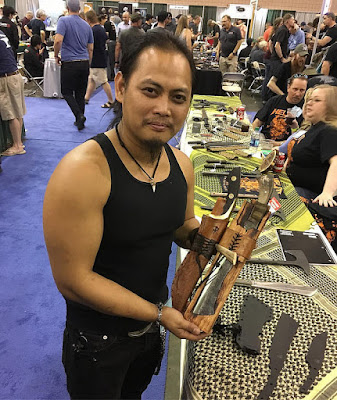 Jason Knight was a contestant on the unaired pilot episode of Forged in Fire.  He won with this Damascus gladius.  He did all right.  :D 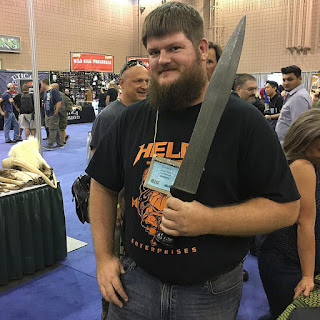 Mardi Meshsejian (another FiF contestant) made a katzbalger that was undoubtedly prettier than the one I built for the show.  Mine was lighter, though; there's a full pound of sterling silver in the guard!  Gorgeous work with a stainless san mai blade, anodized titanium handle, sterling guard, and fossilized walrus ivory pommel. 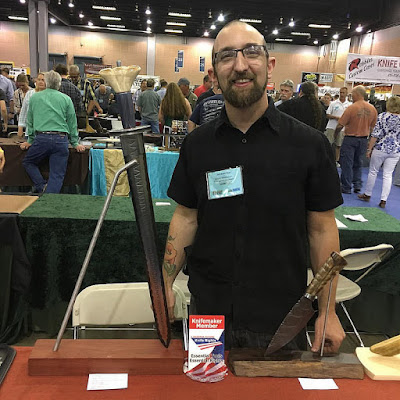 He also had this gorgeous o-tanto with stainless san mai blade and fossilized walrus ivory handle. 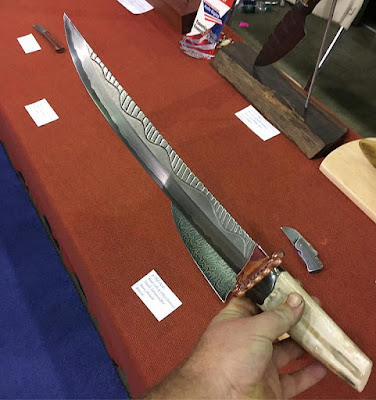 Tobin was as enthralled with RMJ Tactical's official rendition of the Frank Frazetta Deal Dealer ax as I was last year. 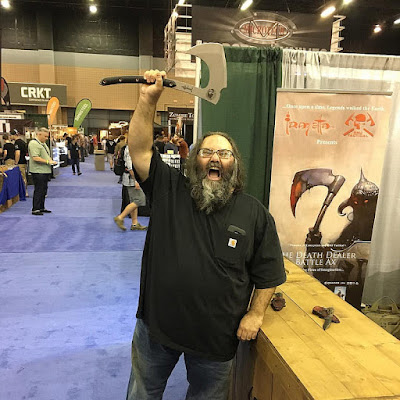 There was a small disagreement that was amicably settled. 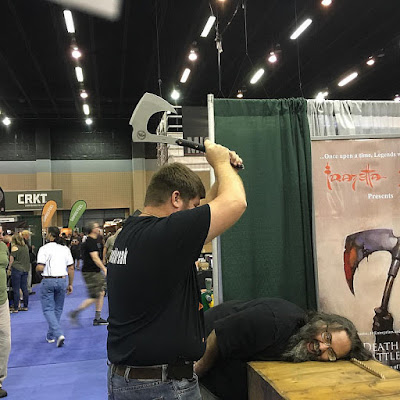 Luke Swenson liked Tobin's glaive in spite of it not being a slipjoint.  :D 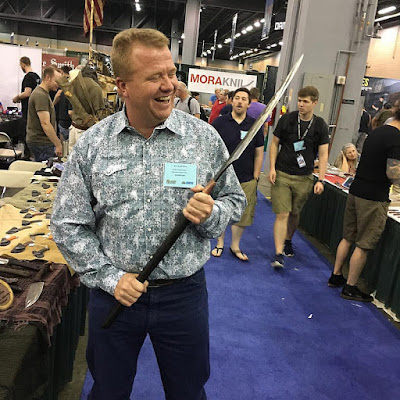 My brother-in-law talking with Tracker Dan.  An interesting study in contrasts. 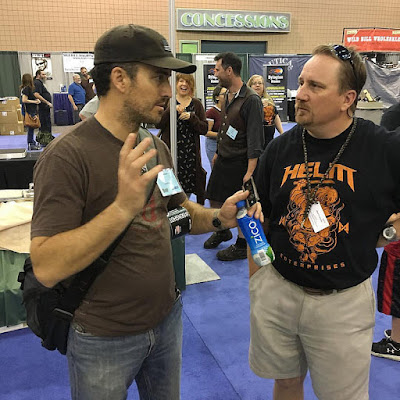 Ed Calderon, the Taco Ninja, poses with some $5 foam nunchucks someone sold my nephew.  Tobin's wife and daughter are in the background, oblivious that they are being posted across forums and social media. 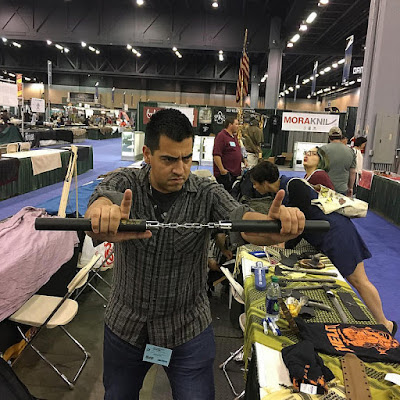 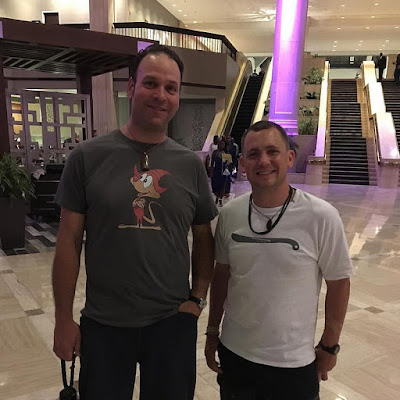 The Forged in Fire contestants who were at Blade Show got together for a group photo. There were a lot of us! 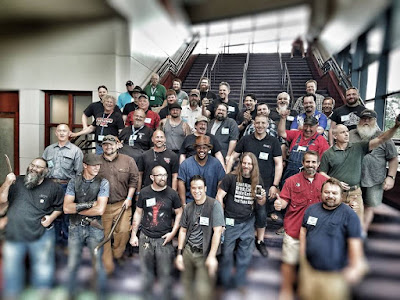 This bolo, o-tanto, and sword were the only items that didn't sell at the show. 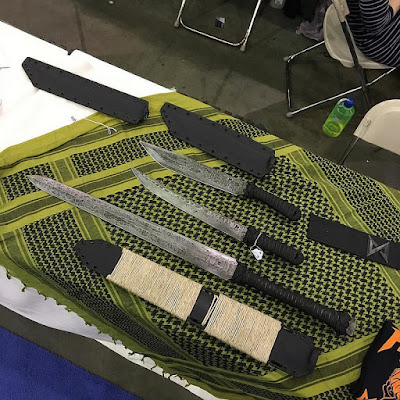 We got invited to tour RMJ Tactical's new shop in Chatanooga, TN, on the way back home.  Enjoyed it a lot!  Ryan made some comment about "the bellies of bladesmithing".  :D 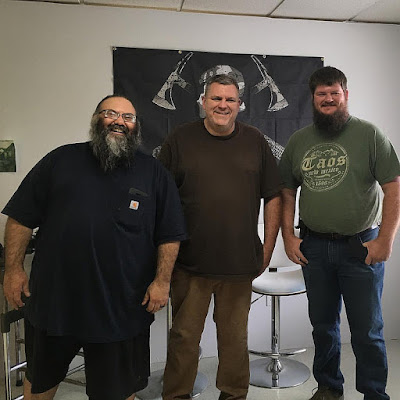 While my wife and I spent a couple of days in the Smoky Mountains on our way home, I shot some better pics of the unsold items.  All three were bought before we got back to Texas. 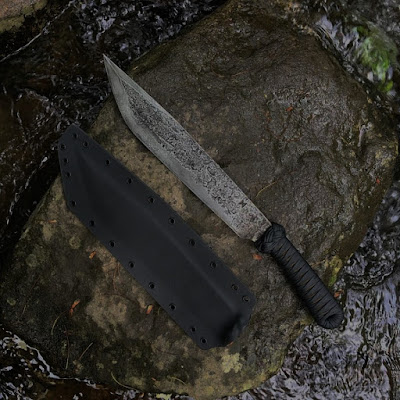 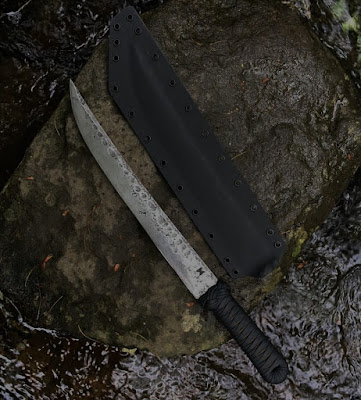 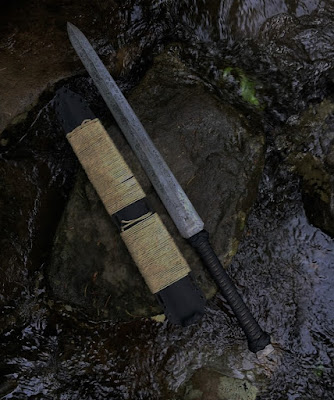 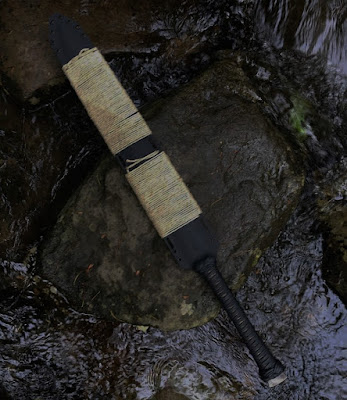 This Sasquatch waded into the stream and grabbed the sword, but eventually wandered off. 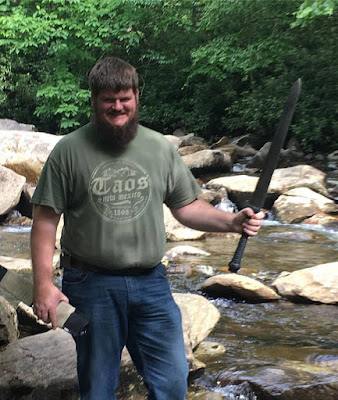 In spite of the long handle on the sword, the Sasquatch's paws filled it with a two-handed grip. 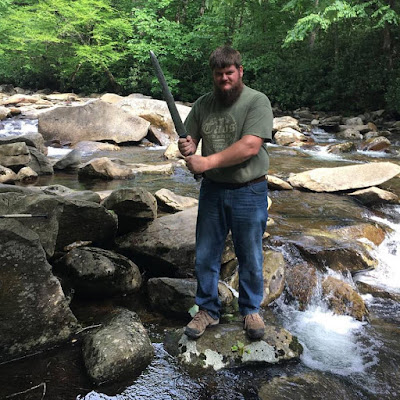 I didn't get a good picture of my two tables at the show.  I did have one of the four smaller tantos travel back with me so that I could ship it to the customer so he wouldn't have to mess with getting it back home. 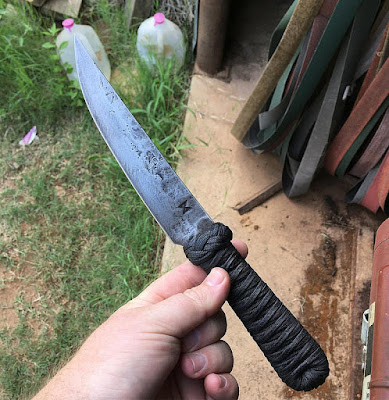 Posted by Helm Enterprises, Forging Division at 4:04 PM No comments: