A forged camp chopper, 80CrV2 steel and TeroTuf handle slabs.  The blade is about 10 5/8" long.  The customer wanted a large finger choil for choked-up work.  It's not the biggest blade I've made by any stretch, but everyone who handled it agreed it was a beast.  :) 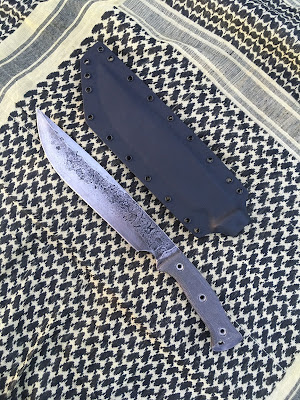 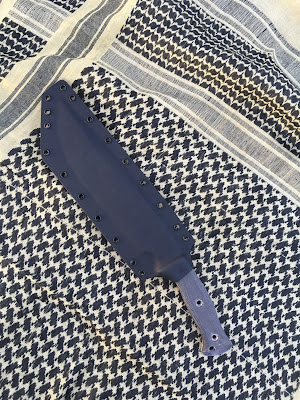 The customer requested an exposed skullcrusher tang and a dedicated lanyard hole.  This was a first for me, to build a slab handle with a notch to accommodate a lanyard hole.  I say "dedicated" because the flared tube rivets also afford lanyard attachment points. 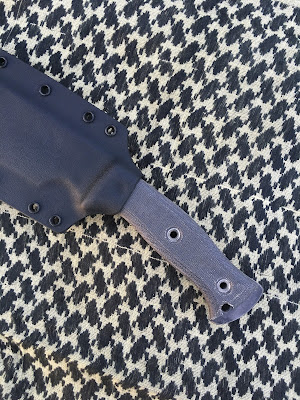 I've been in the very long, slow process of trying to launch a mid-tech stock removal line based on my more popular forged designs.  I haven't posted too much about it because I wanted to have everything ready to roll first.  I'm finally approaching that point.  Along the way I have had small batches of blades waterjet cut and have tweaked my design a bit as I go, getting everything zeroed in to the final product.  I have a very small handful of the older style blade designs in various states of completion, most of which are already claimed, before doing a full launch of the line.

This set of three Benghazi Warfighters was bought by fellow for himself and some family members.  The blanks are waterjet cut from 3/16" 80CrV2 steel, ground and heat treated by me, and handle slabs shaped from TeroTuf using jigs and a series of router bits. 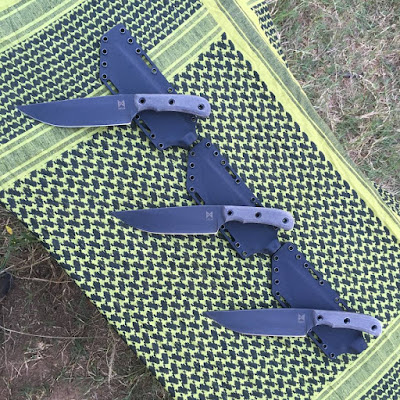 The blades have a Caswell black oxide finish (the final version will have a coating) with the touchmark laser engraved.  The sheaths are standardized, one will fit any of the blades. 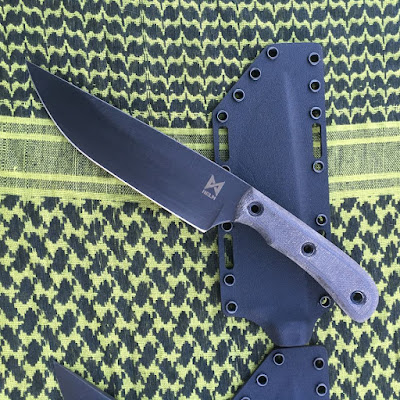 A couple of hours after picking these up, the customer called up and laid claim to one of the older-style Little Rok mid-techs in progress.  :)
Posted by Helm Enterprises, Forging Division at 12:53 PM No comments:

Some mid-sized blades finished up a while back.  All are 80CrV2 steel.

First up is a small meat cleaver commissioned by a customer.  He liked the looks of a cord-wrapped cleaver I had forged for the Blade Show and wanted one with a TeroTuf handle.  I liked the results well enough I traced it out to have a reference if I do future versions.  :)  It's about a 7" blade. 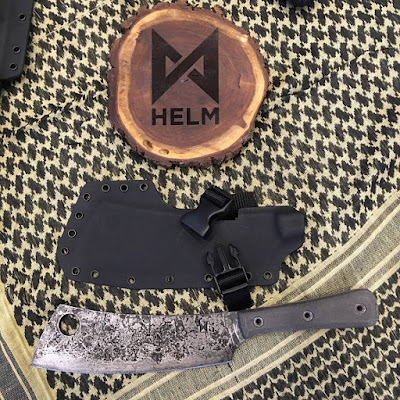 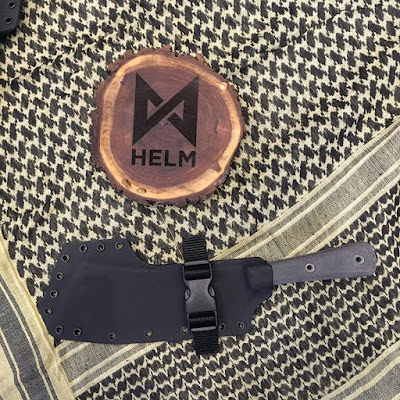 It was picked up at the Usual Suspects Network Gathering knife show, and I didn't get a chance to get good pics before traveling, but here are a couple of interesting shots of it.  The first is during thermal cycling, after forging and before stock removal. 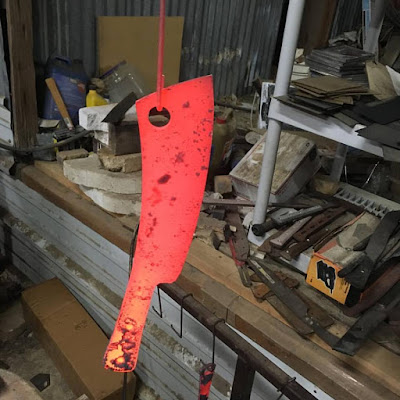 And a picture from the customer himself, just prior to cutting up these ribs.  According to him, the cleaver "went through them like they weren't there".  :D 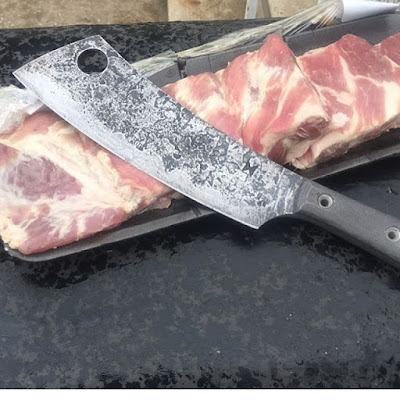 And speaking of cutting up critter parts, another customer had this pic of his drop point processing out rabbit along with an ESEE. 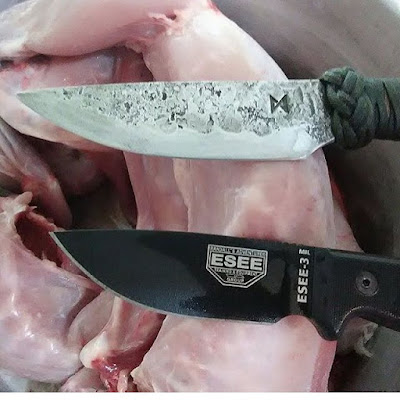 This bush dha was another casualty of having to get everything ready for the show.  These are the only pictures I managed to get.  It was originally intended to be a different blade shape, more of a bolo, but sometimes you have to work with the steel rather than boss it around.  It's about a 12" blade with a handle of hemp under paracord. 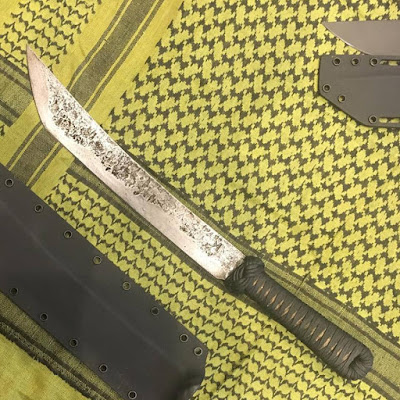 I did get an awesome shot of it with the infamous Ed Calderon, the Taco Ninja.  Got an interesting upcoming project with Ed. 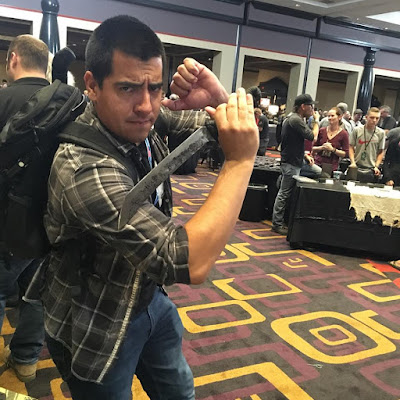 And this 12"-bladed Persian fighter was originally planned to be on my table at the Blade Show, but ended up missing out because I was running out of time.  It went to the Gathering with me and came back where it was claimed once I posted it on Instagram.  The blade is about 12", and the top edge is unsharpened.  I'd consider this to be about as close to doing a fantasy piece as I do. 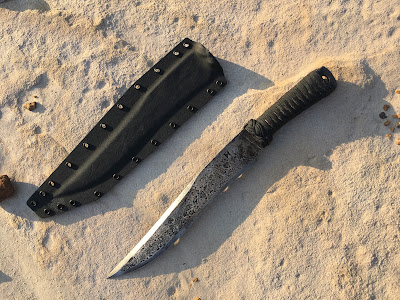 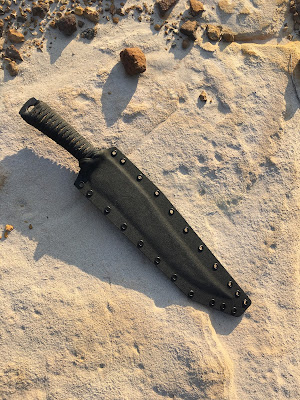 The customer requested a mild steel trainer to be predominantly used on his BOB training dummy.  That was a first to me, but I agreed.  I used 3/16" mild steel and trimmed out the shape on a bandsaw before cleaning up on my belt grinder.  The handles of both are hemp under paracord, and it took three tries to get the wrap to feel almost the same as the original.  Then I worked on getting the balance the same as the original. 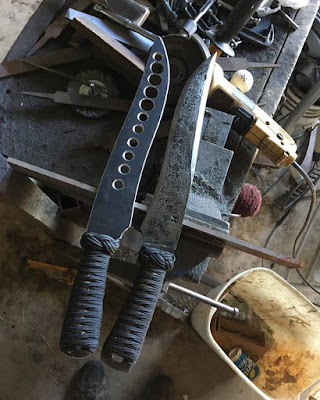 The result was a trainer that's a bit lighter than the original, but due to having the same balance it feels very close to the same. 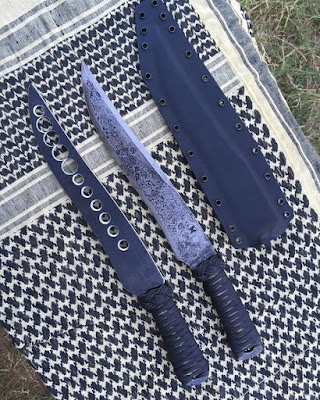 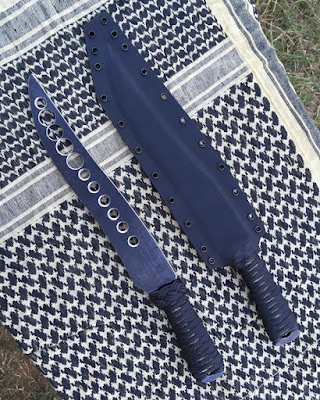 Posted by Helm Enterprises, Forging Division at 8:27 PM No comments:

I currently have three unfinished older style mid-tech Benghazi Warfighters available to be claimed.  These are waterjet cut from 3/16" 80CrV2 steel, will be ground and heat treated by me, will have TeroTuf handle slabs, flared stainless steel tube rivets, Casewll black oxide finish, laser engraved touchmarks, and Kydex sheaths. 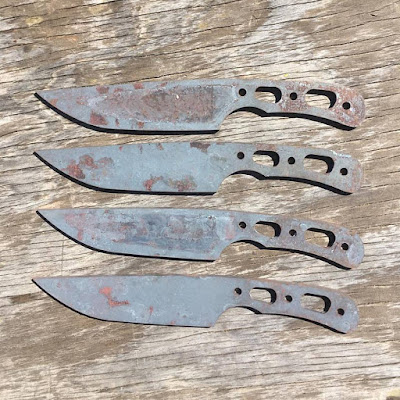 Below are some finished versions.  They are all spoken for.  The pictures are there to give you an idea of what the above blanks will end up looking like. 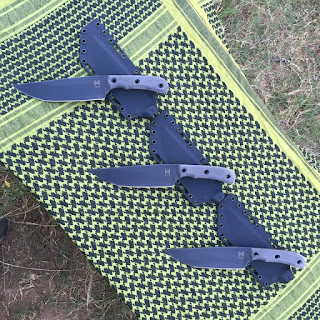 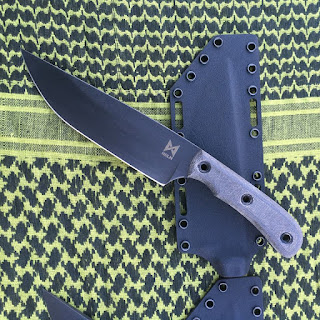 If interested, shoot me an e-mail at helmgrind
Posted by Helm Enterprises, Forging Division at 10:35 PM No comments: