I'm making a batch of Little Rok knives for an upcoming knife show next month.  Some will be single edged versions, some will be double edged.  The original was part of this solider rig: 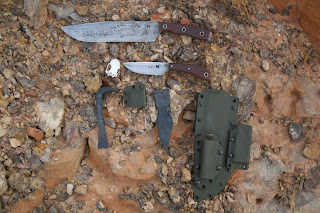 I was contacted by a firefighter in the Air Force wanting a small knife to carry as a defensive blade since he wasn't able to carry a firearm due to the possibility of accidental discharge while dealing with flames.  He's deploying to the Middle East soon and needed something quickly.  I sent him a pic of the original Little Rok, and he approved.  So I forged out the batch of knives and finished his first.  While the rest will get Micarta (and one with cocobolo by commission), he requested a paracord wrap.

So here it is: 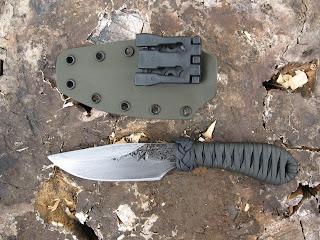 Steel is 1/4" 5160, handle is black paracord for the underlay and two-strand Turk's head knot, olive drab for the overlay, all impregnated with Minwax Wood Hardener.  Top and bottom edges shave hair. 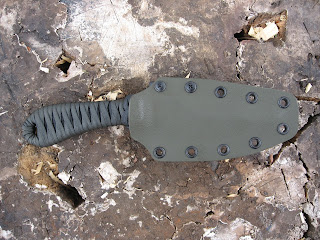 The sheath is olive drab Kydex with a small TekLok.

If a single-edged version with black Micarta is left after the show, I'll be adopting it for my personal EDC.  :)
Posted by Helm Enterprises, Forging Division at 3:19 PM 3 comments:

Another Warfighter accompanies a Marine to Afghanistan

A fellow who is deploying with the Marine unit that I donated knives to earlier in the year wanted one for himself.  I finished one of the Benghazi Warfighters out from the batch I'm getting ready for the Lone Star Knife Expo next month and got it headed his way.  Now I have to build more knives for the show, since all of the ones with natural canvas Micarta are spoken for already.  :)

To be clear, this one is not a donation knife but a paying gig.

Like the others, it's a 6 1/2" blade forged from 5160, with natural canvas Micarta and stainless steel flared tube rivets. 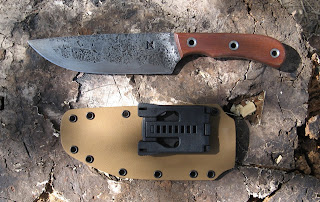 The sheath is coyote brown Kydex with a TekLok. 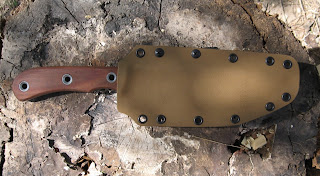 These are the first two to get finished up out of a batch that I'm getting ready for my table at the Lone Star Knife Expo next month. The black one is for show inventory, the double-edged tan version is a commission for a Navy SEAL. Blades are 6 1/2", all edges shave, steel is 5160, handles are canvas Micarta, sheaths are Kydex. 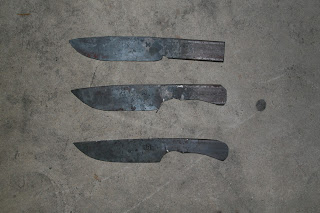 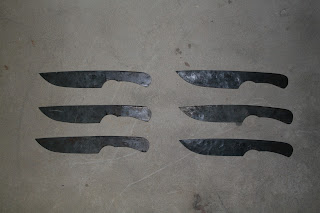 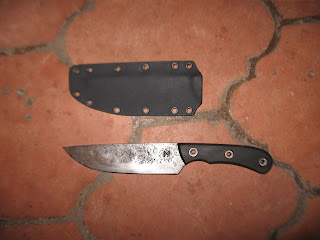 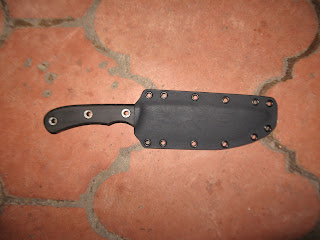 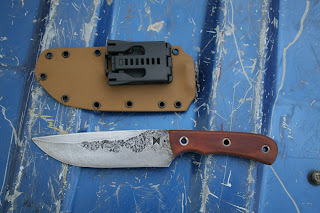 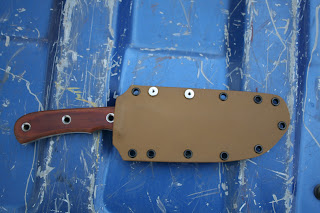 The pictures aren't the best (I'll get better ones later), but to make up for it I have some video with some fairly low-key testing.

Posted by Helm Enterprises, Forging Division at 10:41 AM 2 comments:

Although nothing I do is particularly traditional, this falls closest under the shobu-zukuri tanto style, with a ridgeline below the spine and no yokote line. With a forge finish, a choil, and a secondary bevel, this isn't a typical tanto, though.

The steel is 5160. There was quite a bit more curvature prior to the quench, but the canola oil quench and the blade's cross section gave a fair amount of negative sori. I wish I had taken a picture before the hardening process to show it, but a couple of other knifemakers who saw it before and after noted how much it had straightened. The blade length, including the choil, is 12 1/2" and the overall length is 19 3/4". The handle wrap is coyote brown paracord for the underlay, black paracord for the overlay and three-strand Turk's head knot, all impregnated in Minwax Wood Hardener. 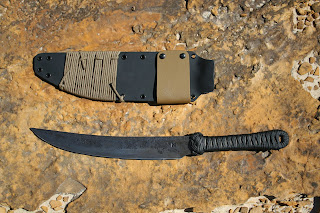 The sheath is black Kydex, with a coyote brown Kydex belt loop set up for edge-up horizontal carry. More coyote brown paracord is stored on the sheath and helps break up the visual impression of the black. 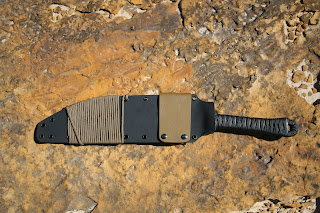 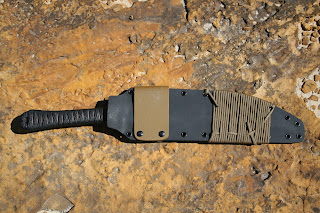 This was an experiement. I've been wanting to make a double-edged blade inspired by Celtic La Tene swords for a while (whether that is evident in the final product or not). I had a customer approach me about a sword blade, so I forged this out as a test piece to see how I would do forging a double-edged blade. I think I see some Chinese influence as well, but it's mostly my style turned toward doing a double-edged short sword. Seeing how this one turned out, I can now see about forging a longer blade. 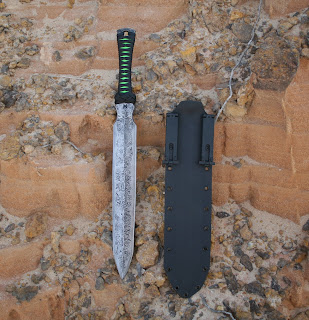 The overall length is 19 3/4" and the blade, including the choils, is 13 1/5". The steel is 5160 and the handle is toxic green and black paracord impregnated with Minwax Wood Hardener, with a three-strand Turk's head knot. Both edges shave hair. 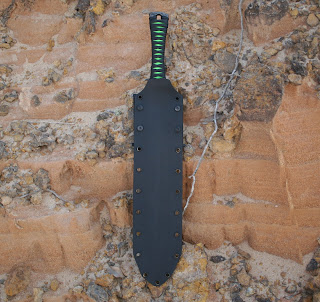 The sheath is Kydex with two MOLLE locks. 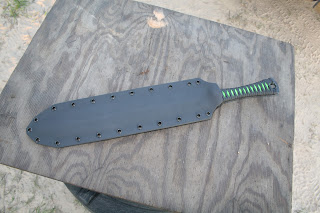