First time for my work in print!

If y'all haven't seen it yet, one of my knives was tested out and reviewed by Kim Breed in the November 2013 issue of Blade Magazine, on page 28.  Magazines being the weird critters they are, the November issue is on the shelves right now in August.  :)

Kim tested out one of my Benghazi Warfighters with a short, fully sharpened double edge.  He refers to it as a Neo-Tribal Utility in the article, which is also accurately descriptive.  He put it through a pretty good workout and I'm pleased with how the knife did.  I particularly liked that he commented a couple of times about the comfort of the handle, as that's something that's important to me.

He put the blade through a thorough series of real world tests and it did well.  The number of rope cuts was a little low, but given that this is a knife built and intended to balance on the tougher side of things to withstand military usage and that bringing the edge back to shaving sharp is quick to do, I am overall happy with the performance.  Kim didn't hold back with it and the knife served well.

This is actually the second time that my work showed up in Blade, but the previous time was a letter to the editor where I thanked them for their article on the Bowies at the Alamo as the picture of the Caiaphus Ham Bowie knife in the article helped me build a commissioned replica I was working on at the time.  I included a picture of my version that they published, but this was the first time that someone else's thoughts on my knives had seen print.

I believe there are some more articles forthcoming in other magazines, but not sure when.
Posted by Helm Enterprises, Forging Division at 9:08 PM 2 comments:

Been working on a handful of cleaver commissions since building the zombie meat cleaver for a KITH a while back.  This one was shipped last week. 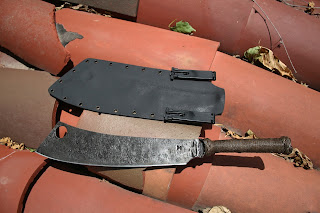 I forgot to take measurements before packing it up, but the blade is in the 13" to 14" range.  The steel is 5160, and the integral socket handle is wrapped in hemp cord, with three strand hemp cord Turk's head knots, all impregnated with epoxy. 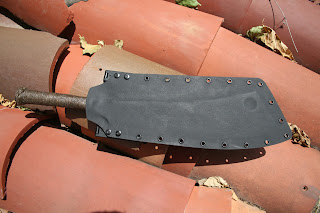 Kydex sheath with MOLLE locks.  The blade is hair-shaving sharp, of course.  :)
Posted by Helm Enterprises, Forging Division at 8:18 AM 1 comment:

This was a commission from a Navy SEAL (a buddy of the one who's been such a good customer to me) to use in processing out the wild goats and feral hogs that he hunts in his downtime there in Hawaii.  Since he was wanting it for more butcher duty than some of the blunt-ended choppers I've made in the past, I followed a more traditional meat cleaver design. 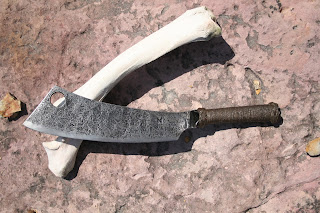 As part of that, I angled the blade to the handle where the knuckles would have plenty of clearance when chopping a carcass on a butcher block. 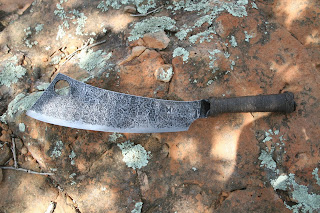 I decided to take pics with several different backgrounds and levels of shade.  :) 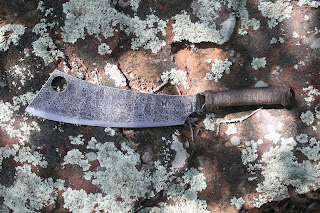 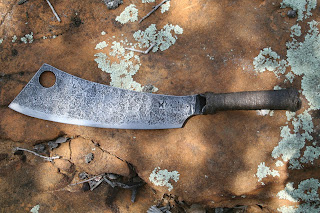 The steel is 5160, the handle is an integral socket handle wrapped in hemp cord with three-strand Turk's head knots at the ends, impregnated with epoxy.  The overall length is 18", the blade is 12" long and 3/16" at the spine, and is 3 1/2" wide at the widest.  It shaves hair very cleanly.

A shot of it in hand. 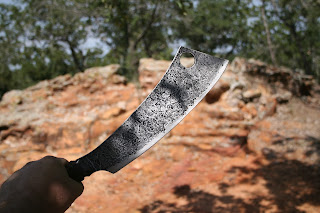 And a picture he sent me of one of the goats he's hunted in the past.  He's promised to send me pics when he gets to hack up a carcass for a barbecue.

Posted by Helm Enterprises, Forging Division at 12:31 AM 1 comment: