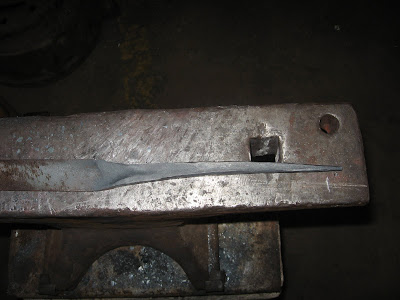 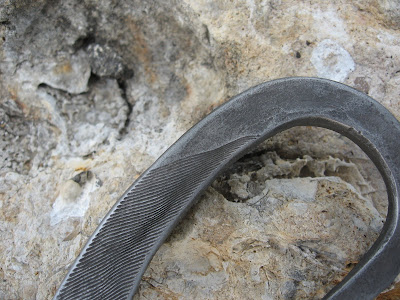 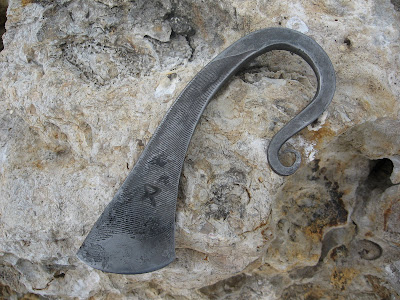 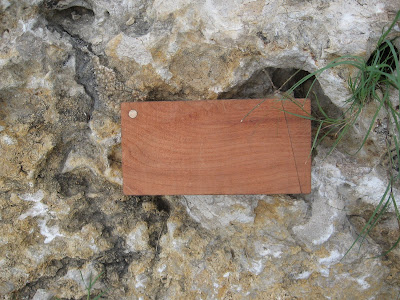 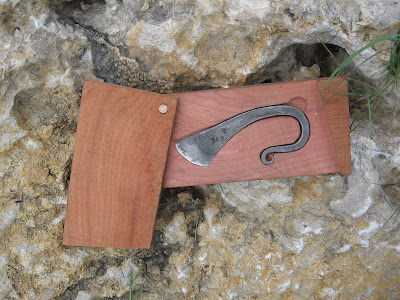 This razor was comissioned by a guy who saw pictures of a similar one I had made for myself last summer. This one is made from an old Nicholson file. The original was car spring. The file's higher carbon content should make it hold its edge longer. With the car spring razor, I had to strop the edge midway through a shave.

It was forged out, ground, hardened in vegetable oil, temper lightly drawn, honed, and stropped. The box is made by my neighbor and sometime student, Bryan Pope, whose fine ax I've already shown. It is made from salvaged red cedar, left rough.
Posted by Helm Enterprises, Forging Division at 8:10 AM No comments:

Further variations on a theme 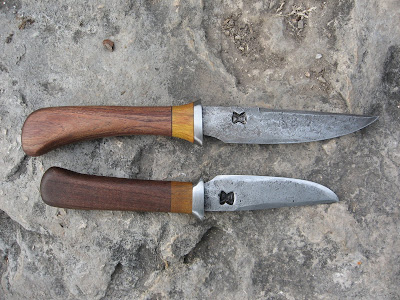 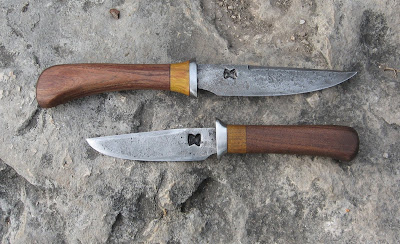 The pink-handled knife that I made for my girlfriend has been my most successful one so far in that it a.) actively discouraged some creepy guy lurking about in the college parking garage simply by her nonchalantly transferring it from her purse to her back pocket and b.) leading to several commissions from folks wanting similar designs.

One of those has already been posted here, the one with the forge finished blade and bodark and mesquite handle.

Well, the fellow who commissioned that has a nephew who is interested in knives. The nephew's family came to visit over the Easter holiday, and said customer had me help the nephew forge out a knife blade with my guidance. The nephew did quite well, doing over half of the forging on the blade, with me showing him the processes and then handing it over, and then doing tweaking as necessary. As is my custom on knives where I don't do all the work, I stamped my touchmark on the opposite side of the blade from where I typically do.

Unbeknownst to the nephew (but beknownst to us), we were actually making his early birthday present. I finished it out and now it's going to be mailed out to California this week to surprise him.

As with the uncle's knife, the blade is car coil spring, forged by hand. This time, I cleaned up the profile by grinding, but hand filed the cutting edge and false edge entirely instead of doing any grinding on it, leaving the main part of the blade forge finished as before. It was hardened in vegetable oil and tempered in a toaster oven. The guard is of railroad spike, the spacer is bodark (Texican for "Osage orange"), and the main handle is mesquite. The sheath is Kydex.

Here it is in comparison with the uncle's knife. It came out a bit larger, and I've learned better how to blend guards with handles since then. You can see how handling has darkened then wood of the uncle's knife.
Posted by Helm Enterprises, Forging Division at 10:12 AM No comments: