Here are the Benghazi Warfighters between their first and second tempering cycles. 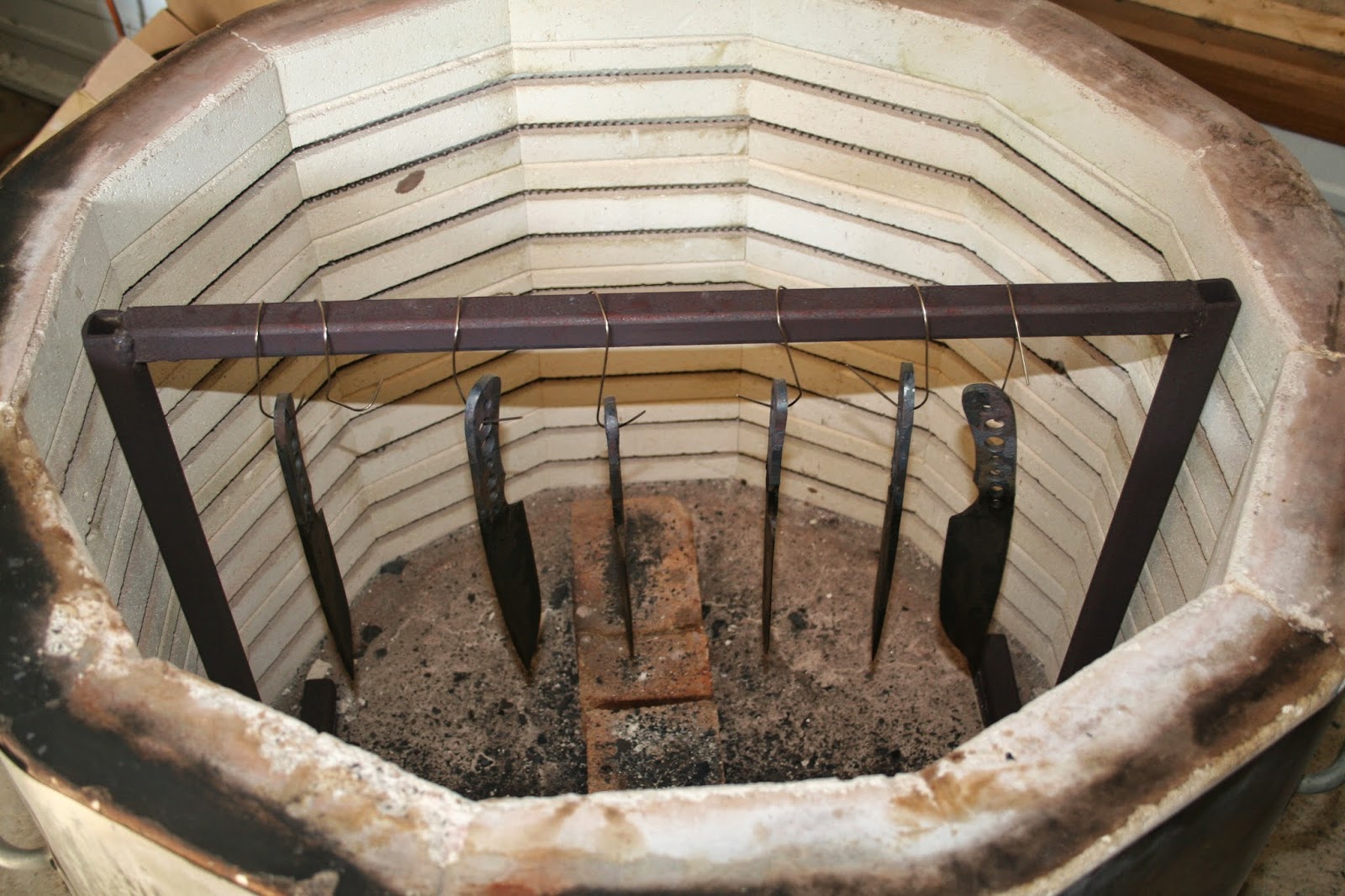 My goal for the day is to grind and heat treat tomahawks.
Posted by Helm Enterprises, Forging Division at 8:39 AM No comments:

Made some more progress today.

First got the wraps impregnated with marine epoxy, essentially making a composite material in place on the tangs.  They're solid now. 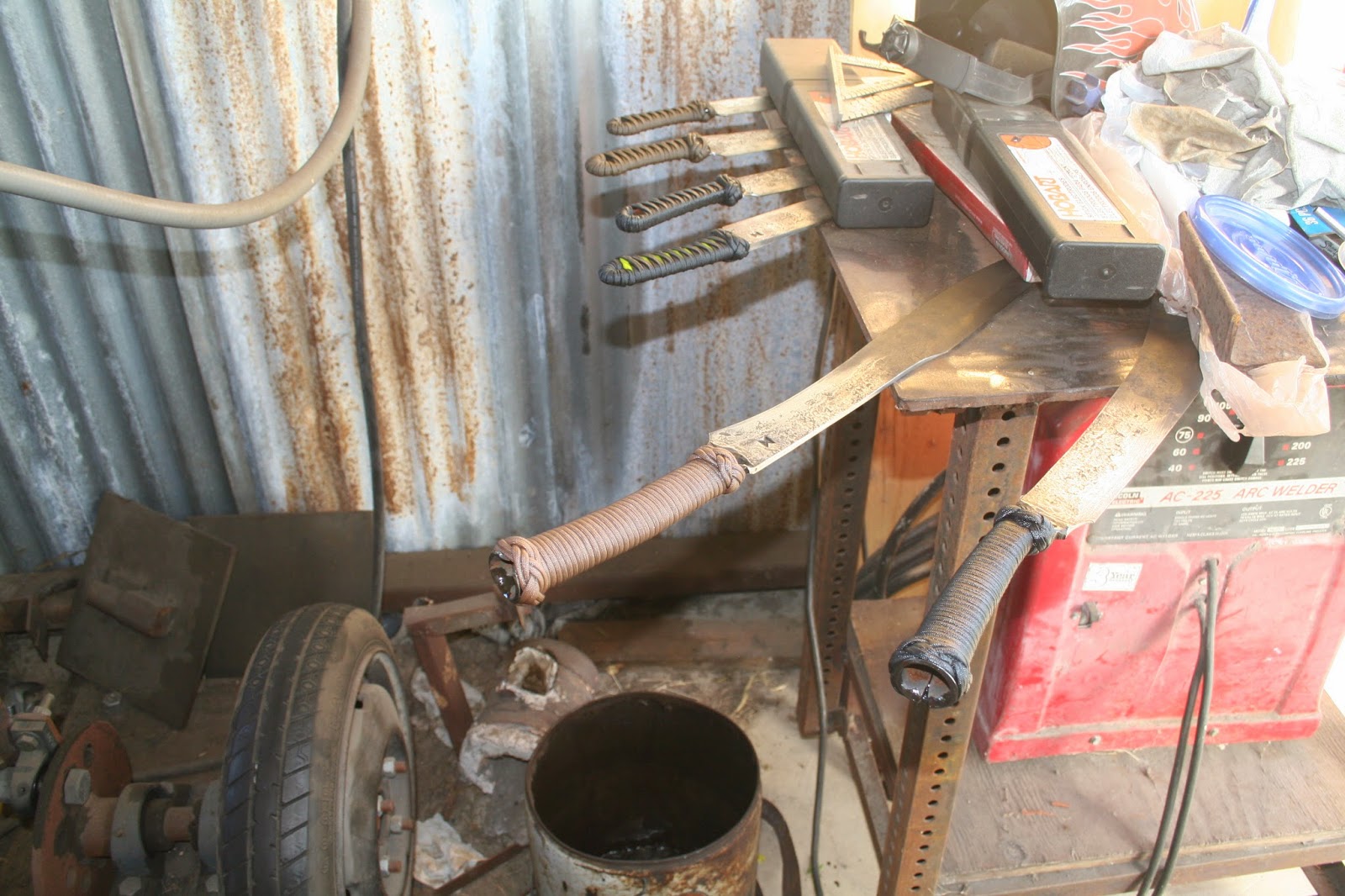 Then worked on the Benghazi Warfighters.

After cleanup grinding on the profiles, time to cut out the tangs with my fancy-shmancy high-moolah bandsaw. 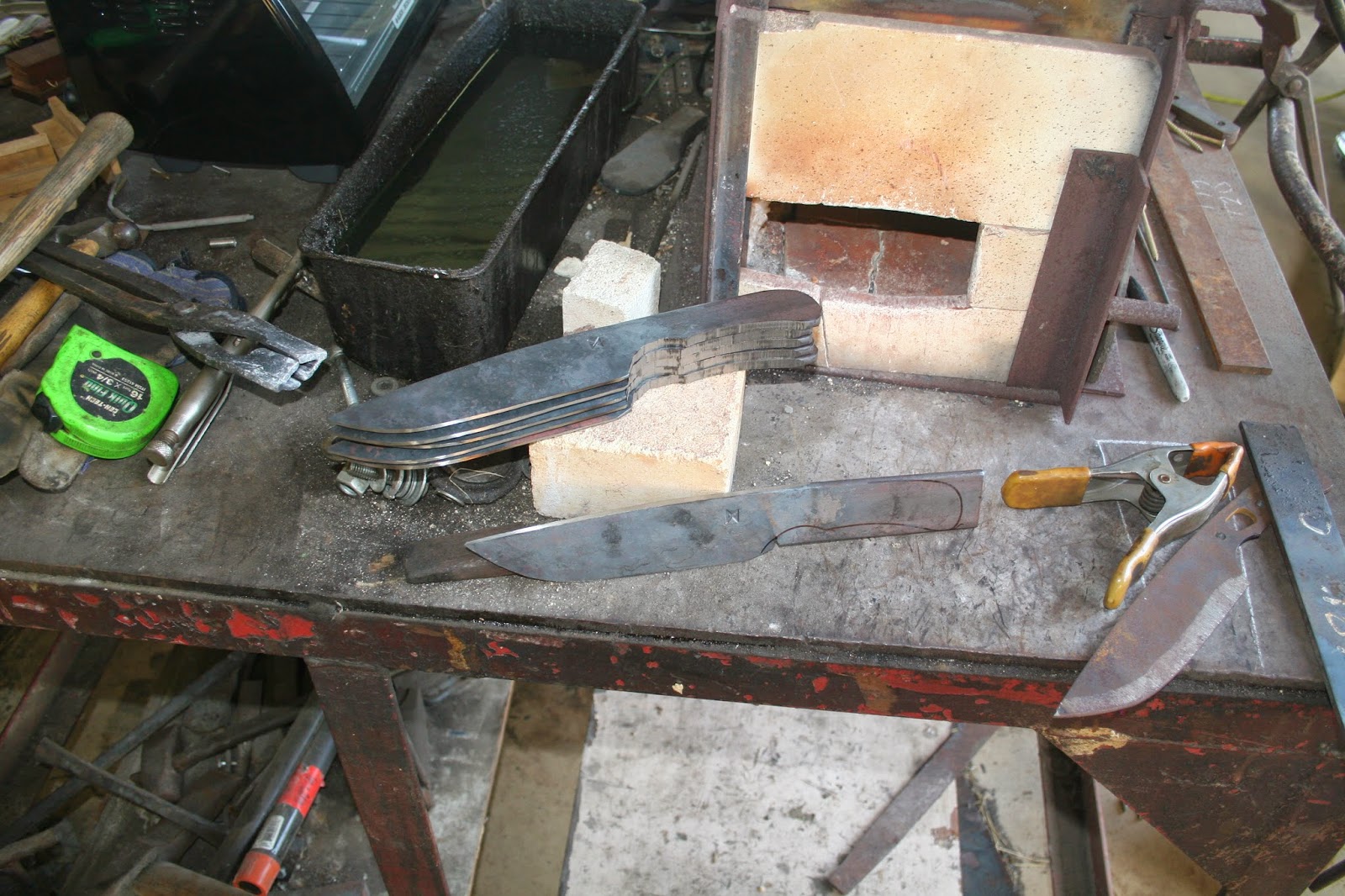 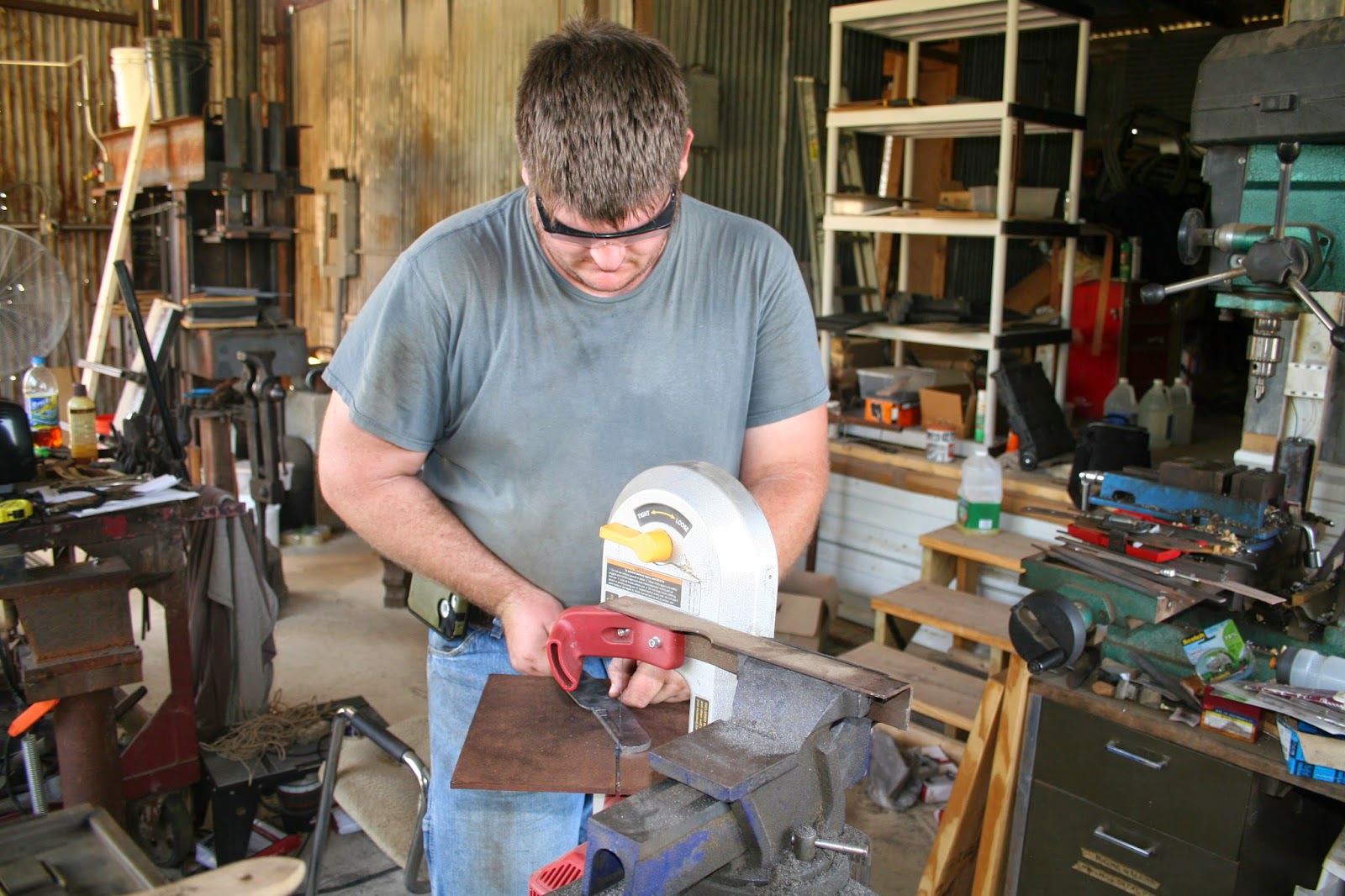 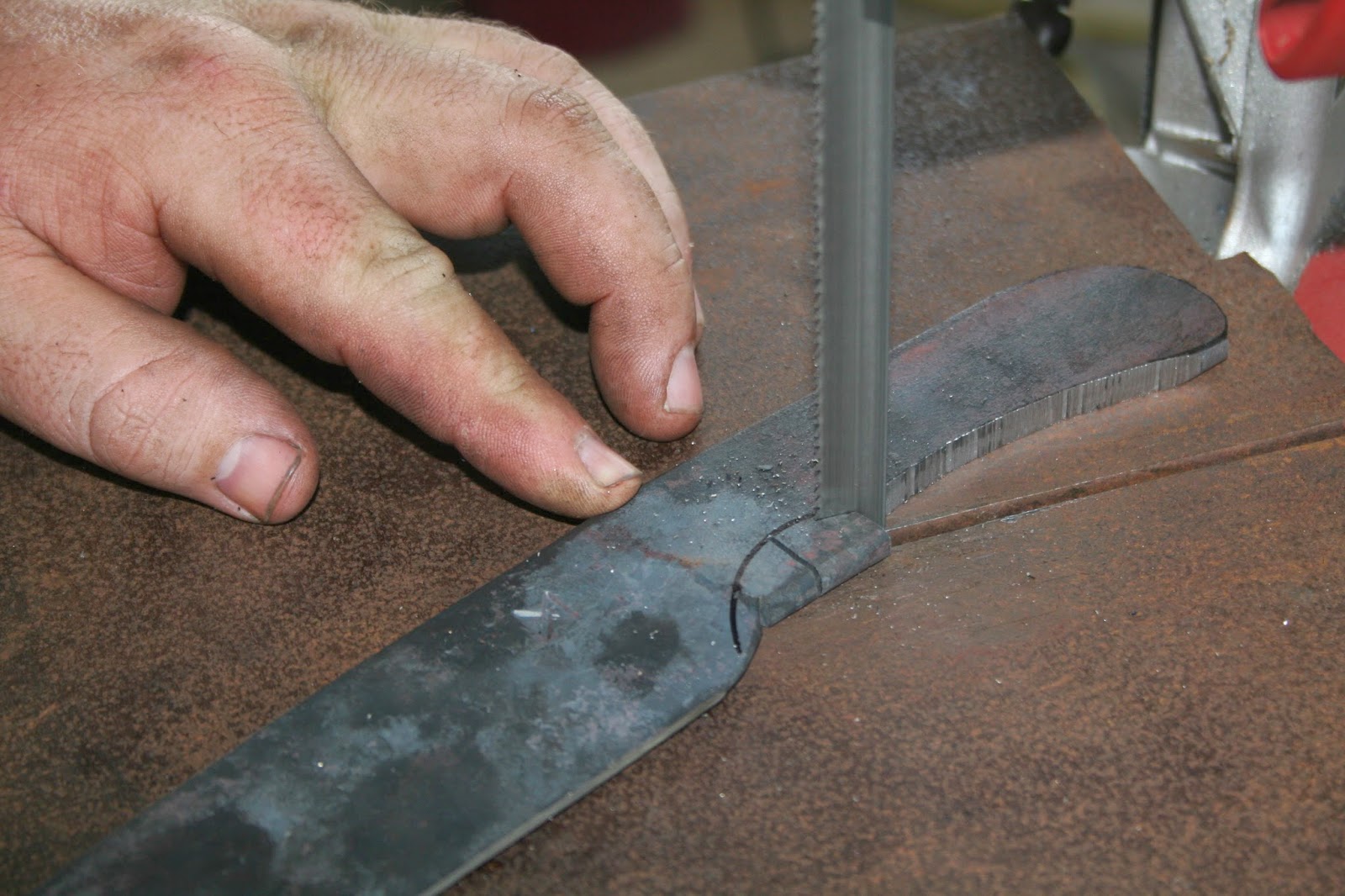 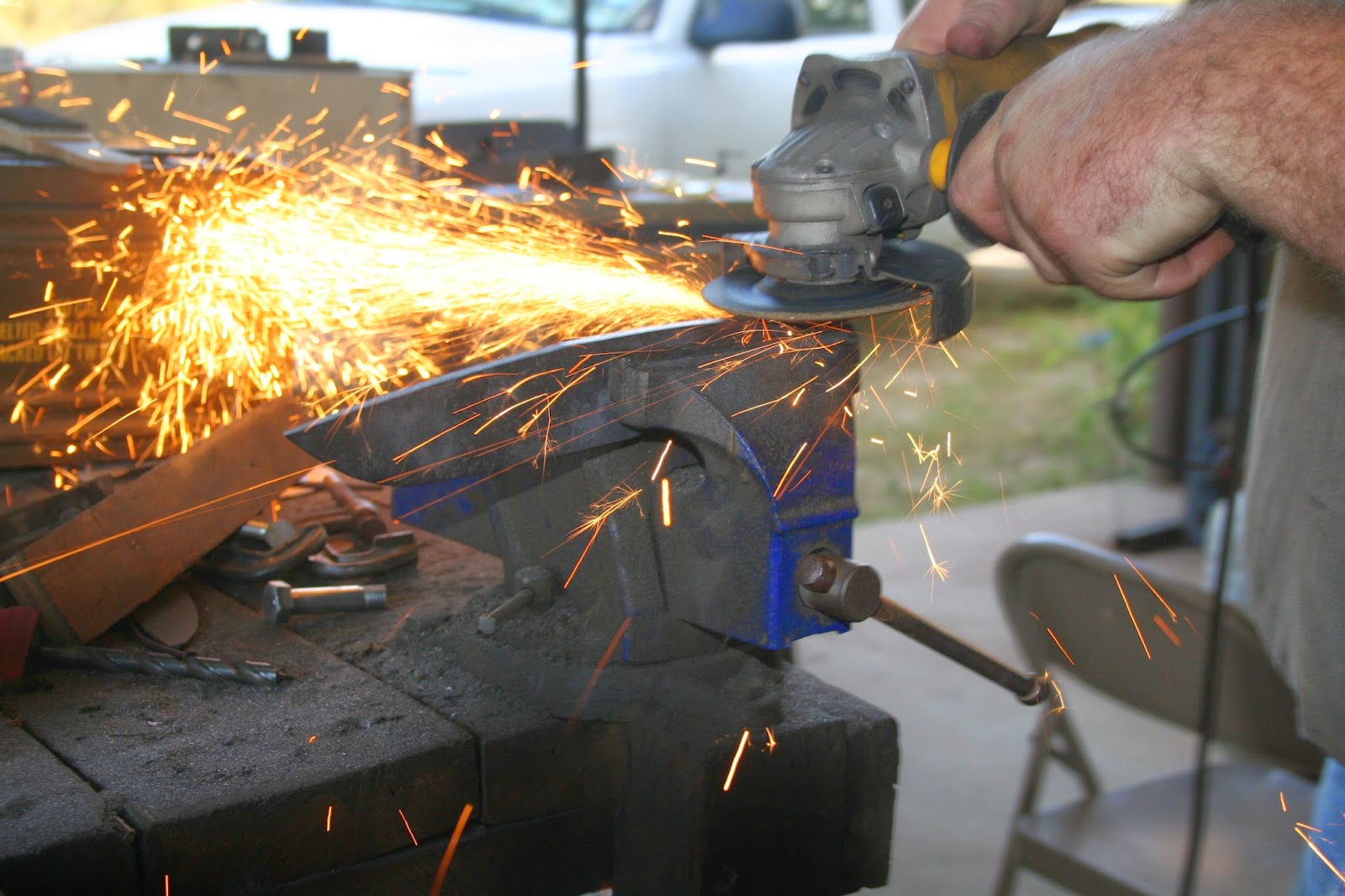 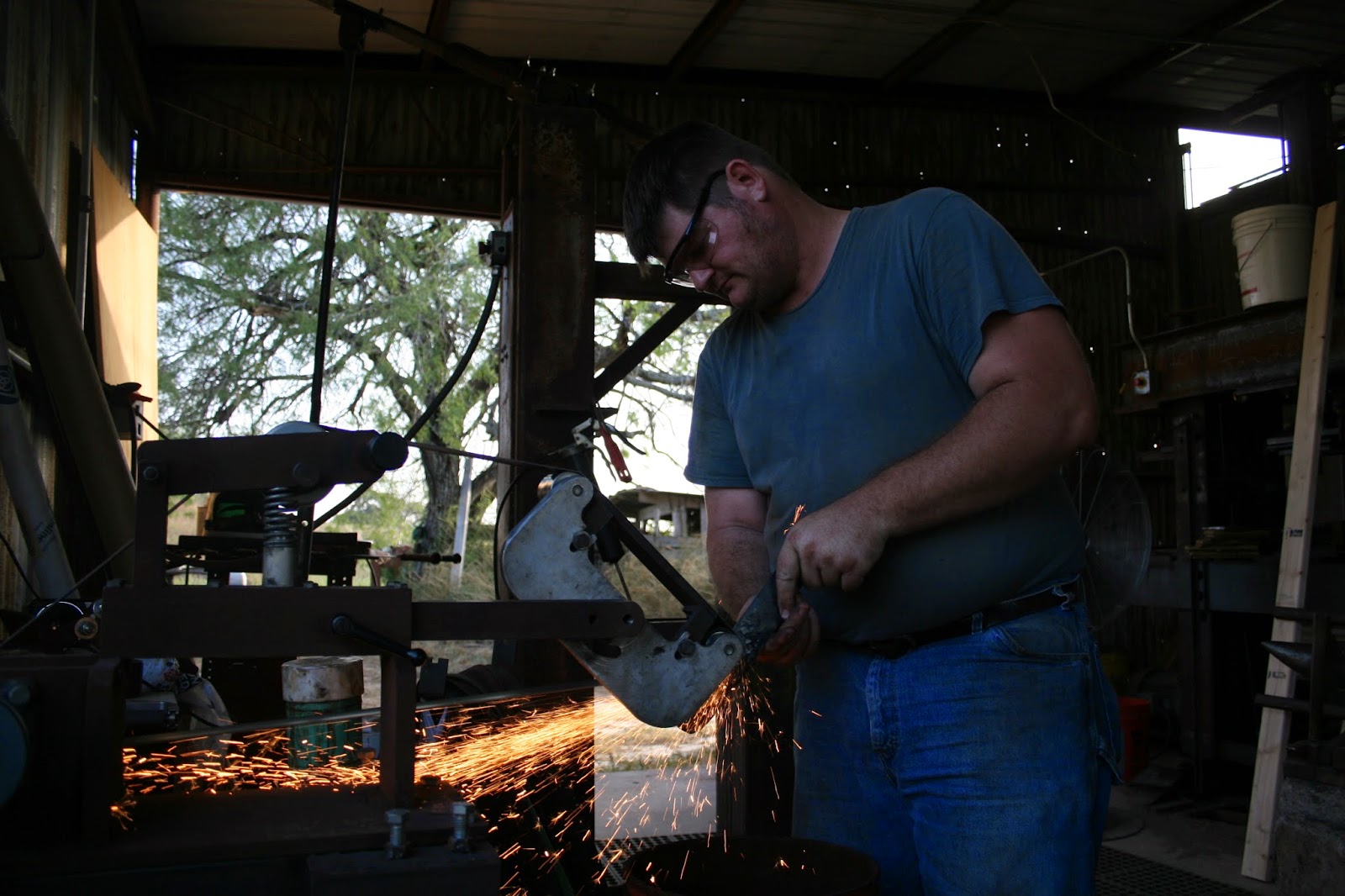 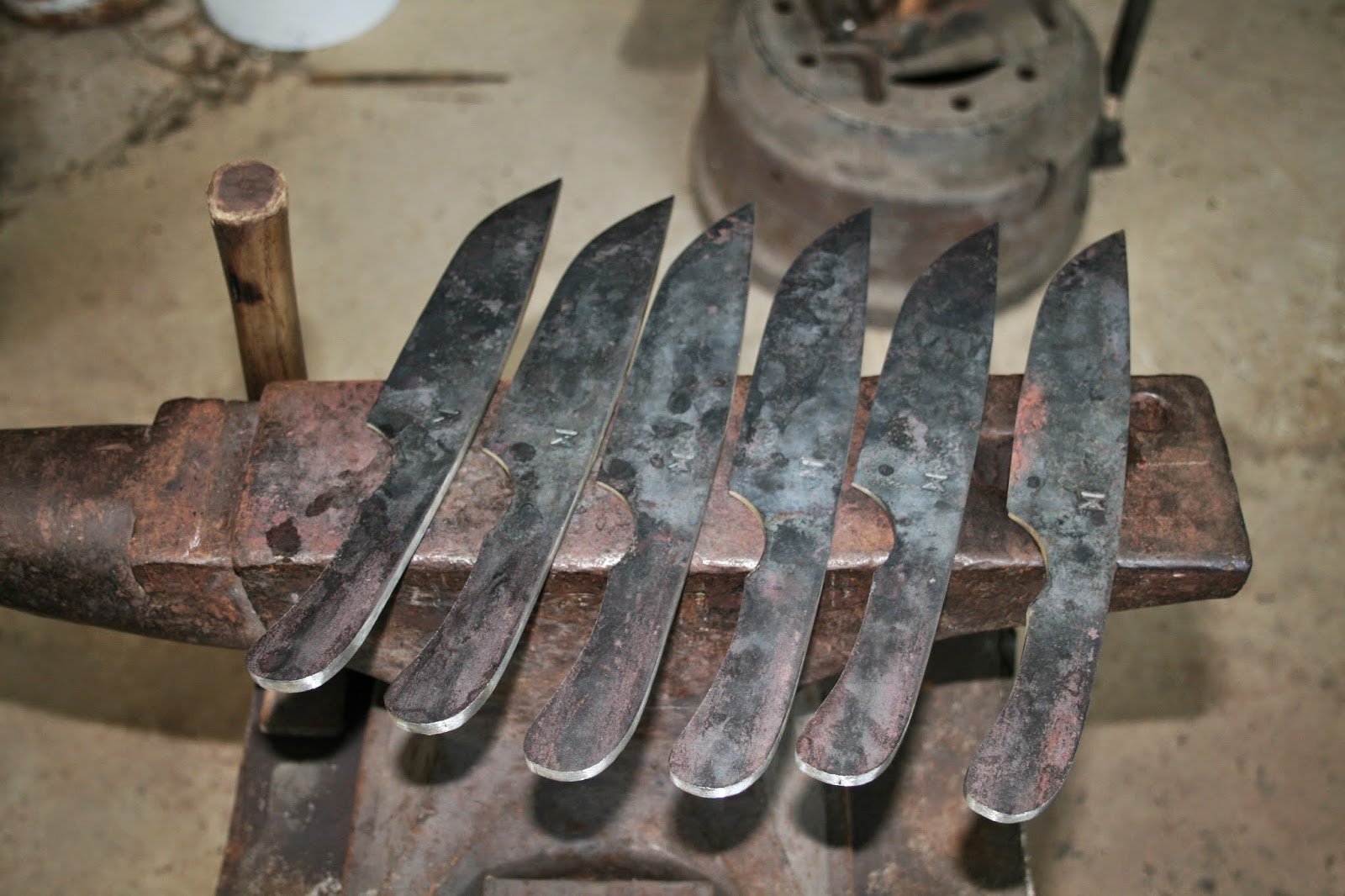 Drilled the rivet and lightening holes, then triple normalized. 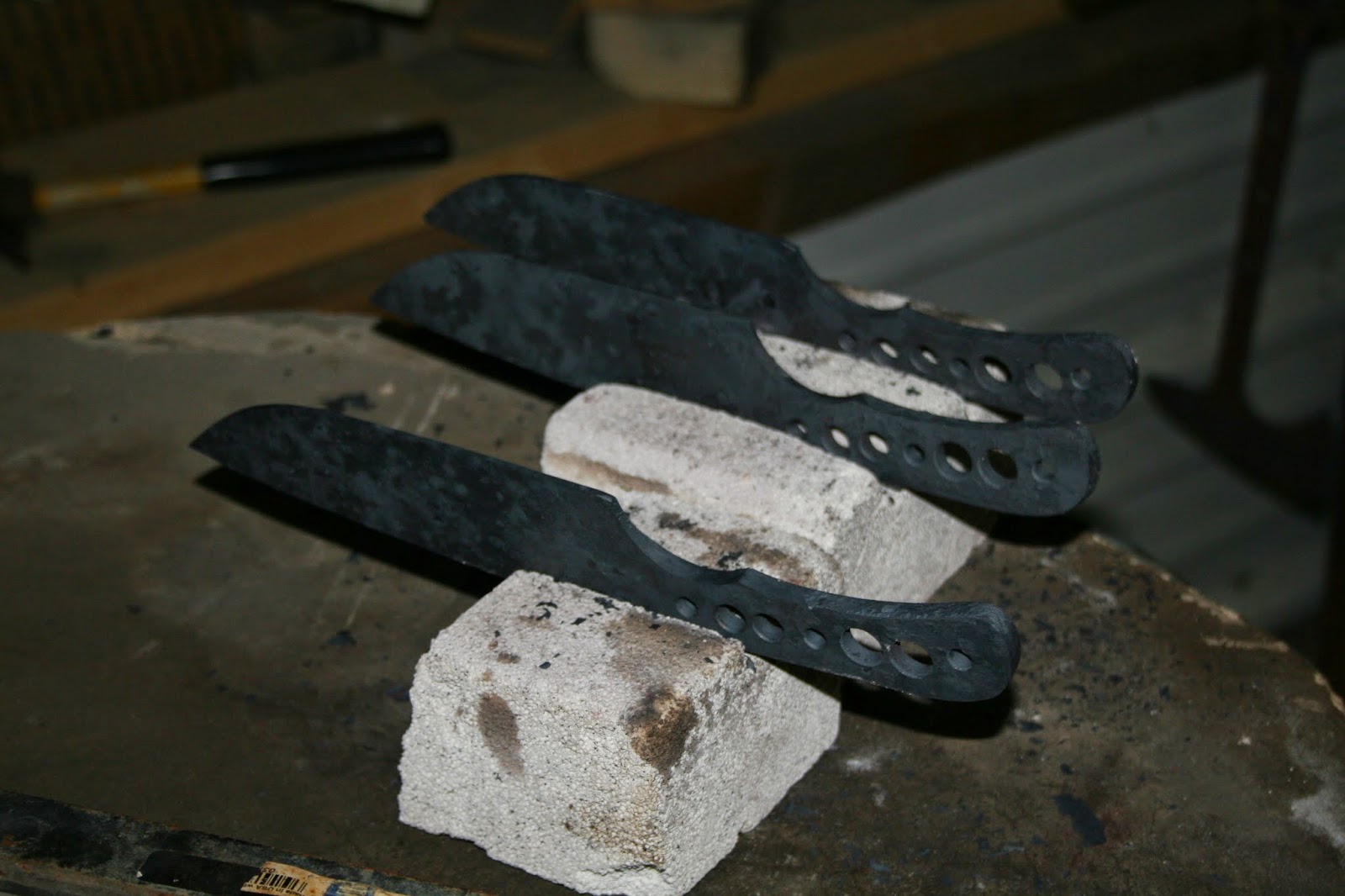 And now they're soaking in vinegar overnight to eat the scale off.  All going well, they should have stock removal and heat treatment done tomorrow.


Posted by Helm Enterprises, Forging Division at 11:09 PM No comments:

Flogging in the heat

I have the Usual Suspects Network Gathering knife show coming up over Labor Day weekend in Las Vegas.  I had a few pieces left in stock from the Blade Show back at the beginning of June, plus a month to prepare.  Figured I could knock out a few commissions and have plenty of time to build inventory.

Then, I caught a cold/flu-like bug at my niece's first birthday party the last weekend in July that knocked me on my back where I barely left the couch for at least 10 days.  And everything that I had on hand sold.

So now I'm scrambling in 100+ degree south Texas late summer to get some work together so I won't have an empty table.  :)  And I haven't posted work in a while, so I figured I'd do so before getting a shower and crawling into bed.

A batch of Benghazi Warfighters as pre-forms. 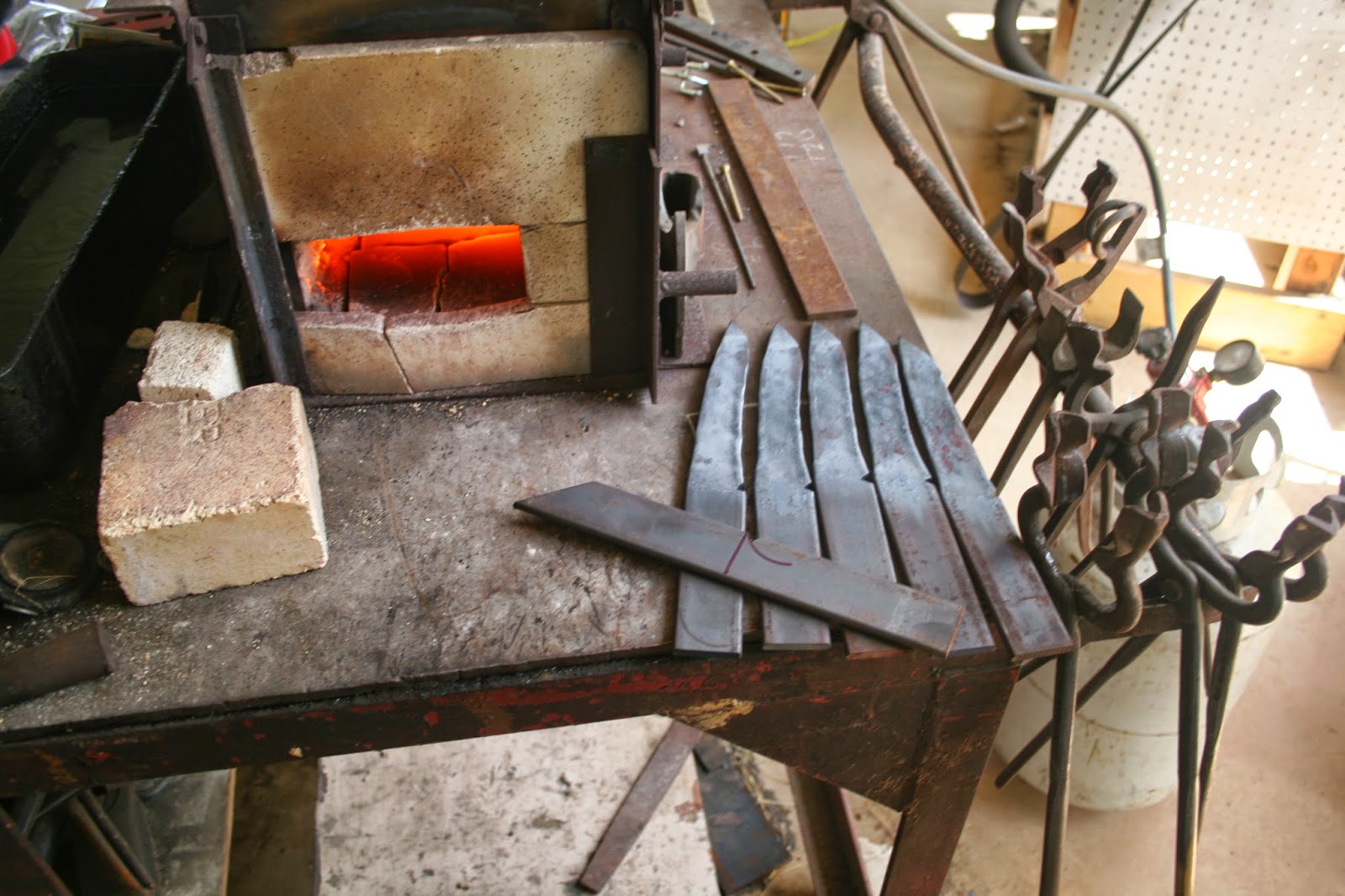 And with the blades rough forged, trimmed, final forged, and awaiting final profile cleanup before cutting out the tangs and normalizing. 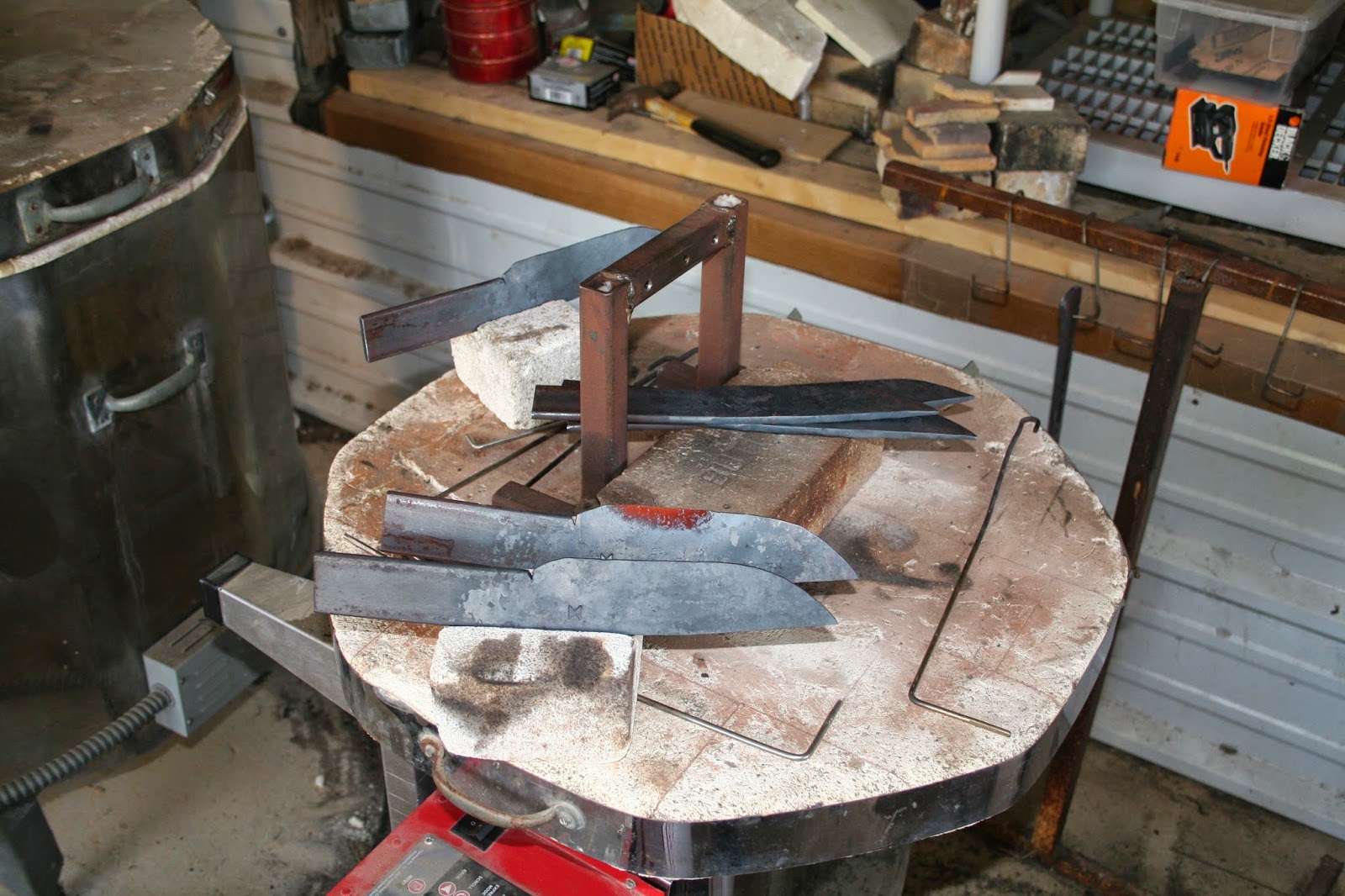 A few cord-wrapped knives waiting to get trimmed and impregnated with marine epoxy.  The one with the retina-searing yellow is a commission. 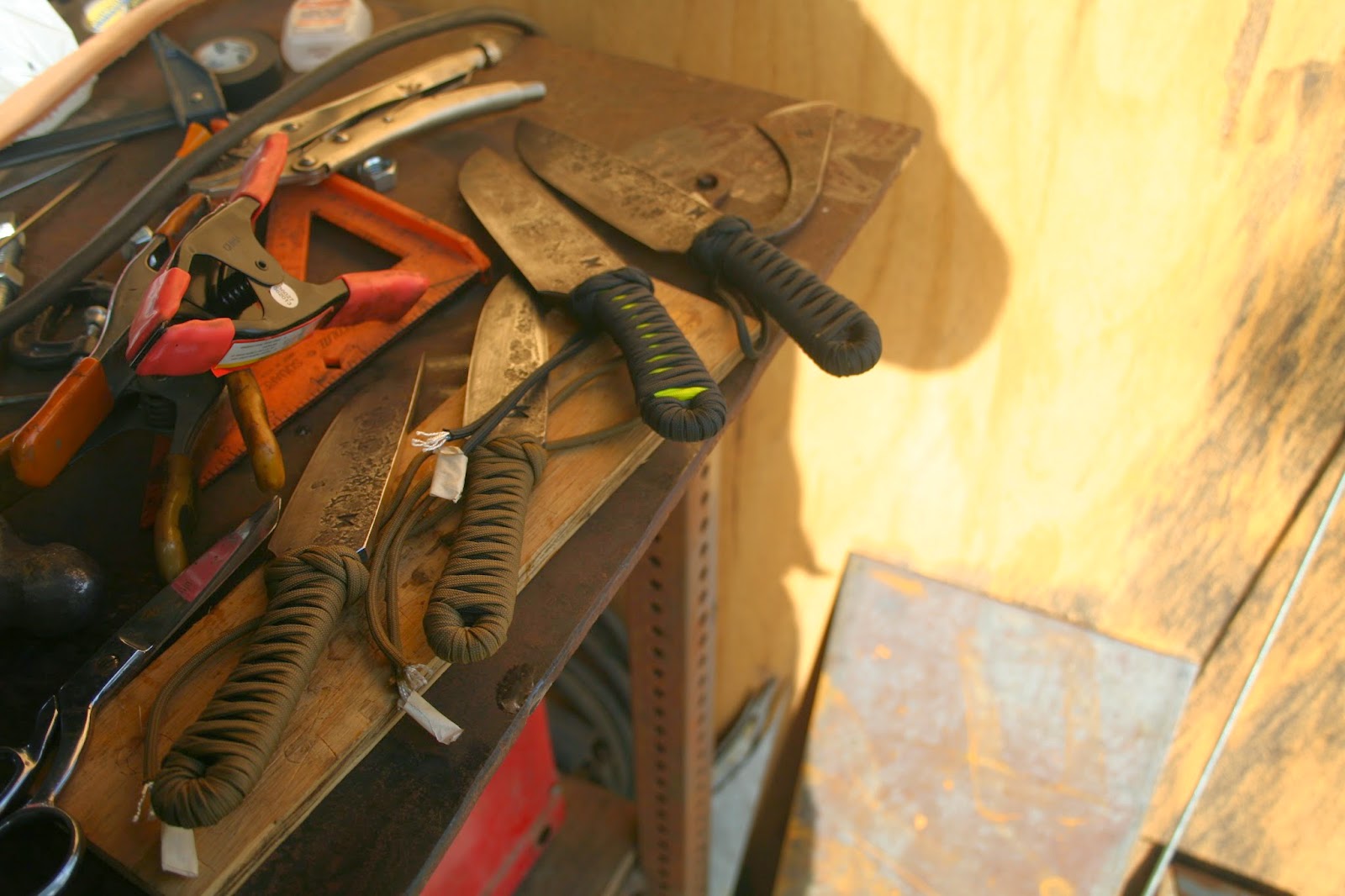 A stack of tomahawks waiting to be ground.  Probably not all of these will be done for the show.  Gotta make strategic decisions on where to dedicate time.
﻿ 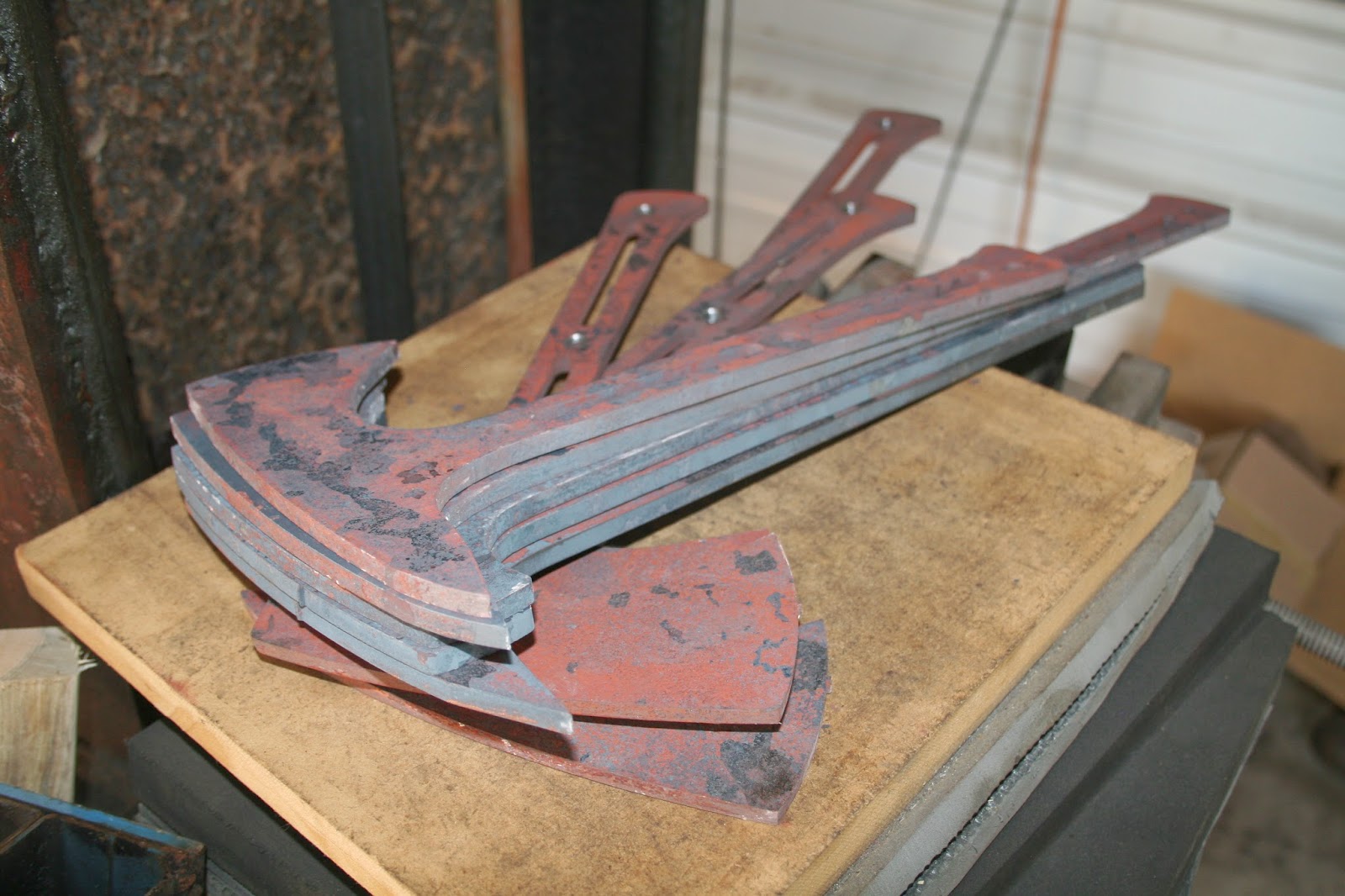 And finally a couple of bush swords post-heat treatment.  The blunt-ended one is about a 14" blade and the slender, sinuous one is about 16".﻿ 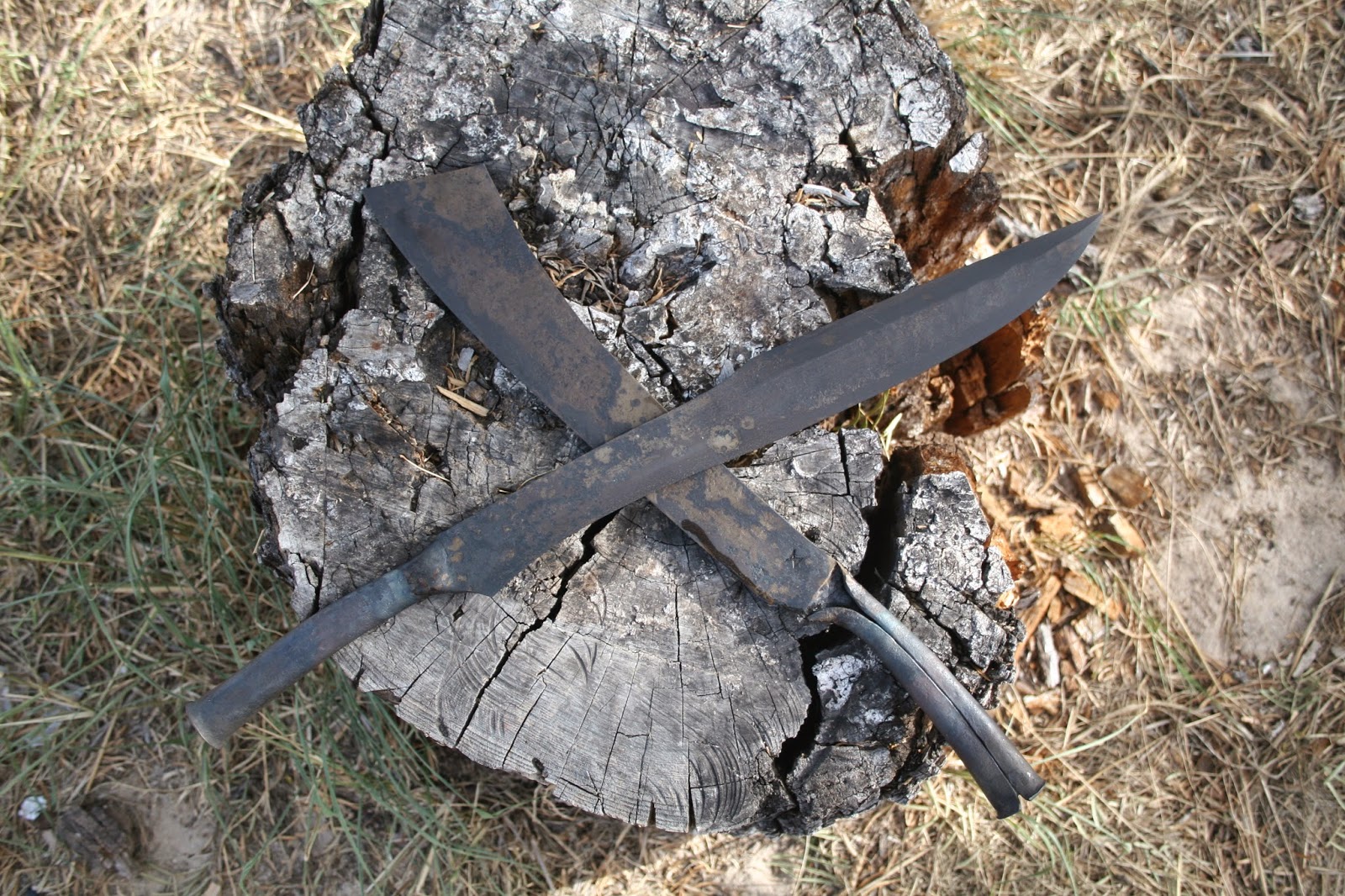