Hello, everyone! It's been a while since I've updated, but it's been a fairly busy time in the interim. Unfortunately not busy making blades, but getting things ready to be able to again...

First off, the Blade Show was an absolute blast. I didn't get to see anything like all of it, but I saw a lot and met a number of folks whose work I've admired online for years. I stuck pretty close to my table and didn't walk around with my camera, so my pictures of the event are very limited, unfortunately. The room was vast and it was full of all kinds of bladed goodness.

Here's what my table looked like right after getting everything laid out. From one side: 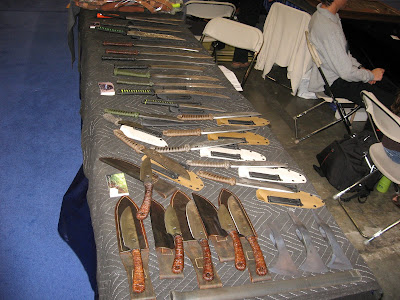 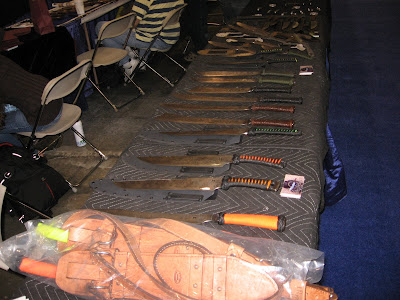 One slice at a time: 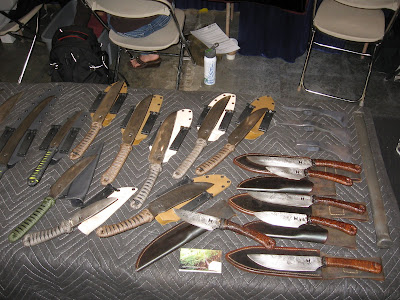 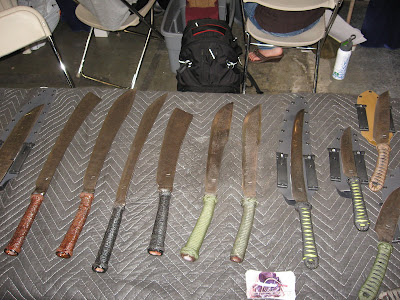 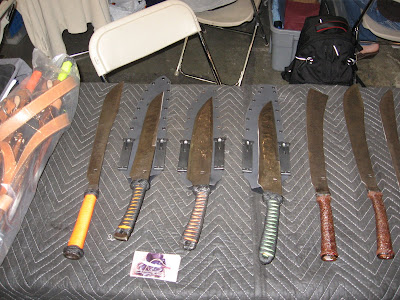 As you can see, it was quite full! Fortunately, it was less full by the time I headed back to Texas.

A couple of guys I met of whom I did get pictures were Joe Flowers and Reuben Bolieu, two fine fellows who write articles for Tactical Knives magazine as well as other publications. 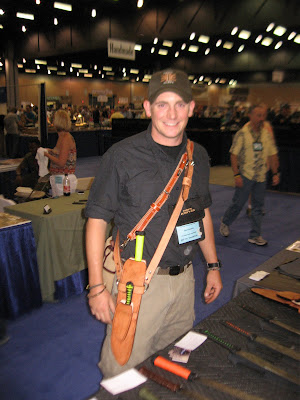 Both Joe and Reuben walked away with a little something from my table, featuring leather by knifemaker Luke Swenson (www.swensonknives.com) who stands on Reuben's right in this picture. More about those little somethings later. Luke also generously transported my blades to and from the show since he drove there with his wife, making life much easier on me. 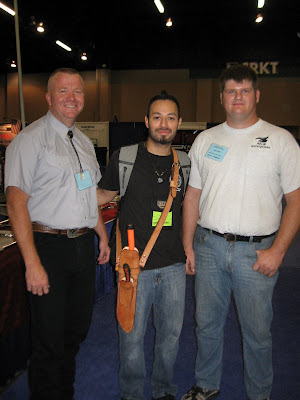 One of the coolest stories from the Blade Show for me was that both Reuben and Joe each left a little something for me. Some months back, Reuben had an article about blades from Thailand published in Tactical Knives. I really liked the blade profile of a 15" brush chopper that was featured in the article, so I forged my own version with an integral socket handle. I worked with the magazine open to the page with the blade, and even used math to figure out the proportions of the clip on the blade. I met Joe on the first day of the show, then a couple of hours later Reuben. Reuben said, "I have something for you", reached into his backpack, and pulled out the blade from the article! You can see how close I managed to get the proportions of the clip to the original. 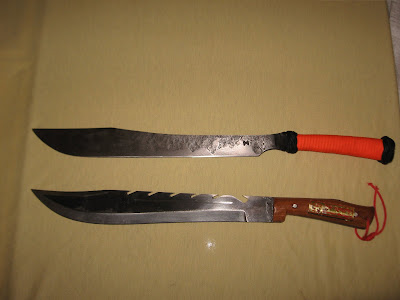 The next day, Joe came back by my table and said, "I have something for you." :) It was a tooled leather machete scabbard from El Salvador, and it perfectly fit my blade from Thailand! I just realized that I haven't gotten a picture yet of the scabbard with the machete, but I will. In the meantime, Joe just put up a video on Youtube showing the scabbards being made:

Since getting back to Texas, I haven't been able to get much work on knives done because I have been moving into a new shop. It's almost exactly a 30 minute drive from my old shop north of downtown San Antonio, but it's out in the country south of the city, a few miles away from the community of Elmendorf and the town of Floresville. The shop is being finished up and although I don't yet have power to run my power hammer and hydraulic press, those will hopefully be up before too much longer and I can get back to pounding steel.

There is also a large apartment on the same property that is getting renovated in preparation for me to live there. Since I grew up in the country, I'm looking forward to once again being out amongst the coyotes and copperheads! :)

The shop is built largely from salvaged materials. It is being added onto the side of a railroad line shack that was built in the late 1800s, which will provide storage area for my materials. The actual shop space is smaller than my old shop, but the storage will balance that out to a large degree. 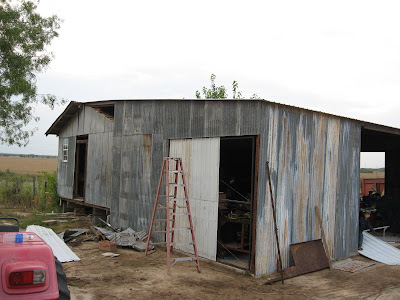 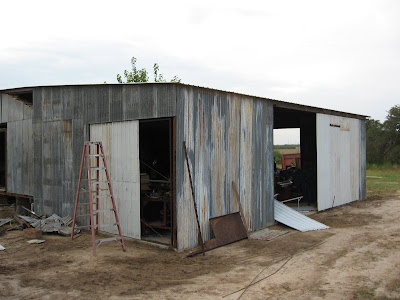 Three large doors will provide plenty of airflow, essential to running a blacksmith shop in Texas. As you can see, there is still quite a bit of re-arranging and organizing to do, but everything is in the shop. 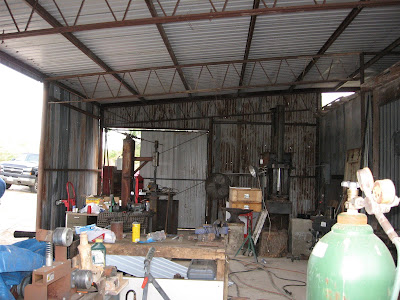 My new landlord and his helper cutting corrugated steel for the west door. 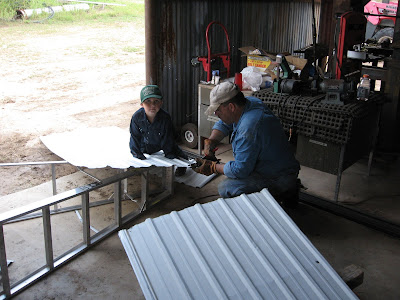 The shop is far enough along that I can start to do some small cold work, and I will be out there tomorow doing just that. More neat stuff will be coming along as the shop gets back rolling.

In the meantime, I need to update my "Available Work" with the knives that didn't go home with anyone from from the Blade Show. :)
Posted by Helm Enterprises, Forging Division at 9:39 PM 4 comments: