My name is James Helm and I'm a blacksmith.

I became interested in blacksmithing around age 15. I began researching the subject in the books I could find in the public library of my home town and on Internet discussion forums. At age 16 I got a little rivet forge and a small amount of coal and I started pounding iron.
Among other jobs, I have had the opportunity to work for three metal artist shops in Lubbock and San Antonio, Texas. I put together a small gas forge and started producing knives for sale in my off hours, working in my employers' shops and moving my forge as much out of the way as I could when finished. Finally, the chance came to rent my own work space and begin my own business. I've been in my new shop space since the beginning of October.
My father was a farmer and owner/operator heavy haul truck driver. Whenever he was contemplating some undertaking, whether custom hay baling or trucking, it was always under the name Helm Enterprises. Perhaps not officially, but it was how he thought of it. So, as a nod to him and his incalculable influence on my life, I have named my business Helm Enterprises, Forging Division.
This blog is a temporary means of having a web presence until a more permanent site is built. I'll be putting up pictures of past and recent work, pictures of my shop, explanations of my work methods, and comments on aesthetics, among other topics.
I do many types of work, from sculpture to hand tools. I tend to focus on blades, however. It is what first drew me to blacksmithing, and continues to be where I spend most of my time.
For my first post, here is a study in contrast: my first "real" knife and a more recent one.
This is the first "real" knife I made. I had forged some railroad spike knives before, but this was the first that I would consider something other than a knife-shaped object. It was forged from automobile coil spring using a coal forge and quenched in used motor oil. It's been so long I can't remember how I drew temper on it. The blade is about a foot long. The handle is twisted copper electrical wire. The sheath was made by a local boot and saddle repair shop. I gave it to one of my best friends from high school after we had both graduated (he was a year behind me). 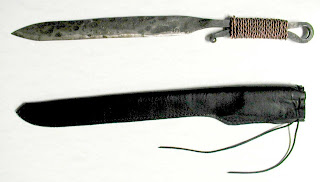 This second knife is one I made for my girlfriend recently. It, too, is forged from automobile coil spring. I used my little home made coffee can gas forge to do the heating and quenched in vegetable oil. Temper was drawn with an oven. The blade is around four inches long and has a false edge on the top. The handle is ebony and a kind of naturally pink wood from Africa called pink ivory. The guard is a piece of railroad spike. The sheath is Kydex. 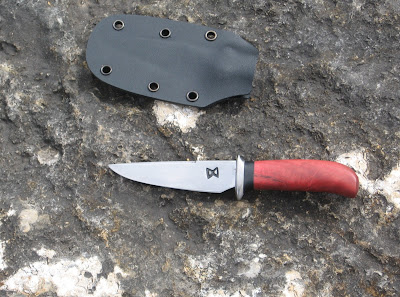 Check back often. I'll be posting pictures of my work and shop here pretty quickly.