General Education About Tool Use Part 2

So in this middle ground of tools between "the tool as art (often seen with custom knives)" and "crappily stamped out by the millions in a Chicom factory", what do you get?

The price of a custom tool is higher than that of a mass-produced tool (usually, not always). It's not something you would want to treat as disposable. In exchange for that, however, you should be getting a tool that will fit your hand comfortably, is weighted and balanced beautifully, does the job it was made for quite satisfactorily, and is aesthetically pleasing.

Let's take for example a drawknife. In the days of table saws and bandsaws, not many folks use drawknives any more. However, there are still plenty of areas of fine and general woodworking where no other tool really does the job. The only places I know of to get a drawknife by just walking in off the street in San Antonio, TX are Northern Tools and Woodcraft. Northern Tool's offering is poor at best, with a very rough cutting edge and somewhat less-than-comfortable handle angles. I think it is sold for stripping bark off of lumber, and it may do well at that. For general woodworking like I use a drawknife for, it would take a fair amount of work just to get it to the point where it would cut wood well, and it would still be rather awkward to use. The offerings at Woodcraft go in the opposite direction. They are small specialty tools made to flex. Not all that helpful when you're trying to make an ax handle or a table leg and need to hog wood off.

On the other hand, I have a drawknife that I made as a sample tool for a class I teach. It's a bit rough-looking, but I have used it quite a bit since making it and have been very happy with it. It's forged from a car coil spring, filed entirely by hand with no power tools, and hardened in veggie oil. It will cut off large swathes of wood if I need it to, or shave off tiny feathery curls, all dependent on the way I use it. 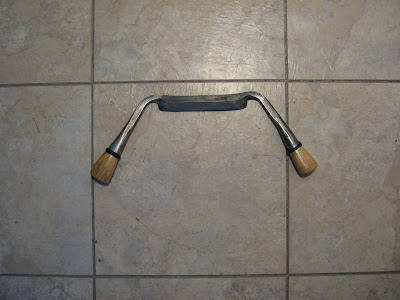 The handles are integral socket handles. I've never seen that done on a drawknife; I did that simply to show what could be done on a project like this. 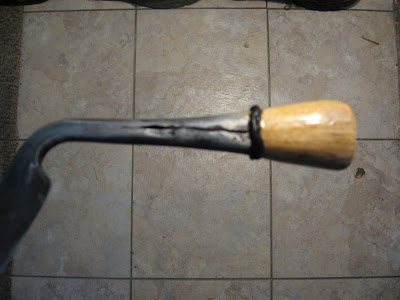 The wooden portions of the handles are made from an old forging hammer handle that had been shortened time and again until it could no longer be used as a hammer handle. The first two Turk's head knots I ever tied help clean up the transition from metal to wood. 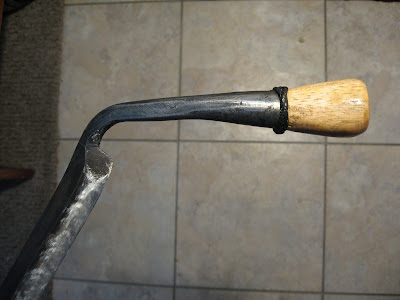 So, not the prettiest example of a drawknife, but it: a.)is comfortable to use. b.) is visually interesting. c.)DOES THE JOB BETTER THAN WHAT I COULD EASILY BUY.

A custom-made tool should fit those criteria. Of those three, doing the job better than a commercially made product is the most import, in my opinion. A craftsman who is dedicated to producing a quality tool is constantly holding, turning, smoothing, hefting, etc. He feels how the tool is growing as he makes it and adjusts as needed. It takes time, and time is money, but the end result is a tool that should serve you until you are dead if you treat it well.

As the number of people who use hand tools on a regular basis decreases, the number of people who have the experience of what the difference is between usng a mediocre or poor tool versus a quality tool decreases, and the fewer quality tools become available for sale in non-specialty stores. It becomes harder for those who continue to work with their hands to find anything that will do the job, not only well, but even adequately.

This is true not only for tools that have been relegated to "specialty" status, such as my drawknife example above. Ever look at the axes available in Home Depot? Laughable. I've seen a couple of different people buy True Temper (which at least used to produce good tools) hatchets that had an edge almost an eighth of an inch thick. It took me a while to get decent edges on them. Look back at my student Brian who made an ax for his first project; it cost him some money, but he ended up with a tool that will outperform anything he can buy at a store and will last a lifetime.

Death of a Wakizashi, Birth of a Tanto Part II

Here's what we ended up with: 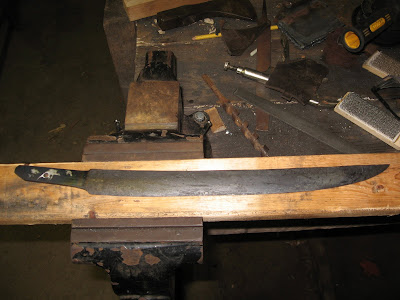 And the video showing (most of) the steps: http://www.youtube.com/watch?v=GYtnHZjxjEY
Posted by Helm Enterprises, Forging Division at 10:47 AM No comments:

Death of a Wakizashi; Birth of a Tanto?

Something one learns in bladesmithing is that sometimes things just don't go well. As I teach my students, "Remember, you can screw it up beyond saving at any point in the process. But if you know what you're doing, you can save quite a bit."

Case in point, this sad ending to a wakizashi that was going well. However, perhaps this is actually the starting point of a tanto instead?

http://www.youtube.com/watch?v=cx1GAXSNlKA
Posted by Helm Enterprises, Forging Division at 8:41 AM No comments: 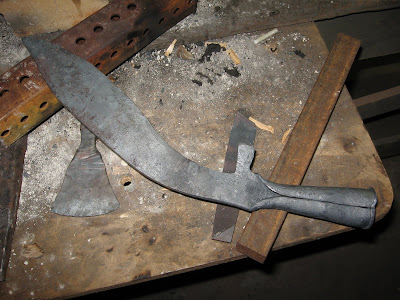 This is the work of one of my students under my guidance. It combines a Nepalese khukuri blade with an integral socket handle like those found on Filipino Igorots' blades and on machetes in certain parts of Mexico, a handle construction popularized to a degree in the United States by knifemaker Tai Goo.

The student sread the steel for the handle, but had me roll the socket while he watched the process.

Check out the Youtube video with more pics and details, some forging, and some other projects he's worked on: http://www.youtube.com/watch?v=fmEsobppHv4

His son is working on a machete with a ~20" blade that will also have an integral socket handle.
Posted by Helm Enterprises, Forging Division at 9:15 PM No comments:

For the student's block anvils, they have the options of taking them as-cut and doing any cleaning up themselves, having me grind the faces clean, and/or having me weld on some angle iron with holes drilled in it that allows the anvils to be screwed down to a wooden base. This greatly increases the anvil's effectiveness.

One student so far has taken the anvil as-cut, and one has had me grind the face clean and weld on angle iron. Here's the process of grinding.

The surface of the steel is rather rough, and those irregularities show up on any steel forged on it. I started with a regular hard wheel to knock down the scale. This is actually harder than steel and can be very tough stuff. After getting it somewhat down to where the grinding wheel can contact the steel, I switched to a 40 grit sandpaper flapwheel. 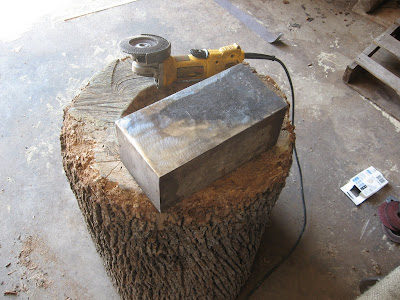 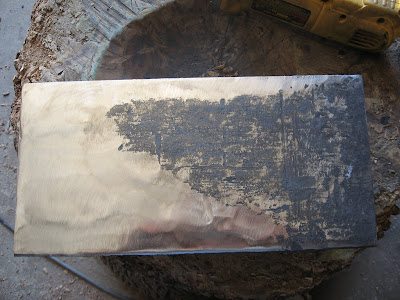 After a while (taking breaks to let the hands recover and the grinder cool down), eventually I got to a clean, but wavy surface. The 40 grit flapwheel was almost completely worn out by this point. I knocked down the worst of the waves with the 40 grit, moving quickly so that the high points were knocked down without the disk really digging down into the metal. Finally, I switched to an 80 grit flexible abrasive wheel and smoothed it to an even surface. Not machine precision, but more than satisfactory for the job at hand. I rounded the sharp corners slightly, then added the angle iron to anchor it. 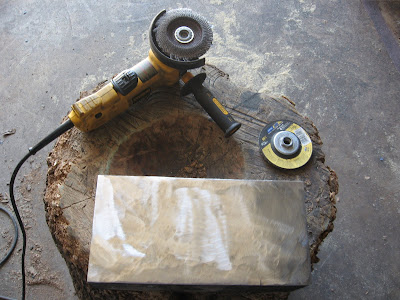 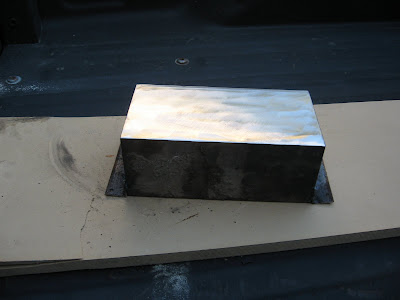 The grinding lines show up a bit exaggeratedly in the last picture. Running your hand across the surface shows it to be pretty smooth. This one is more nicely finished than the block anvils I prepared for my student forging stations, and those have worked out quite well.

Prices for the anvils as-cut are $80. Grinding the face adds $20, and angle iron adds $10.
Posted by Helm Enterprises, Forging Division at 9:41 PM 3 comments:

This is the first of a series of custom sheet metal forming stakes for a customer who makes beautiful raised copper and silver vessels. It started as a 1.5" square bar of 4140 molybdenum alloy steel. Some forging and much grinding later, it had a shaft of 1" square to clamp in a vise, and the rest had a different radius on each face of the square.

Here it is in the forge, heating up so it can be hardened. You can see that each side is ground to a different radius. 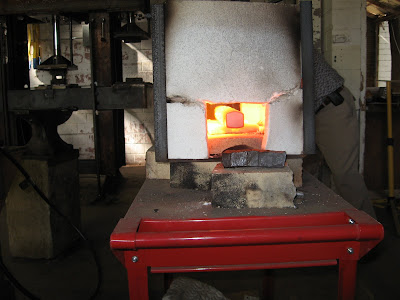 After heating, it was quenched in oil. Unfortunately, my camera was not able to catch the little marbles of blue flame that danced across the top of the oil. It was something to see. 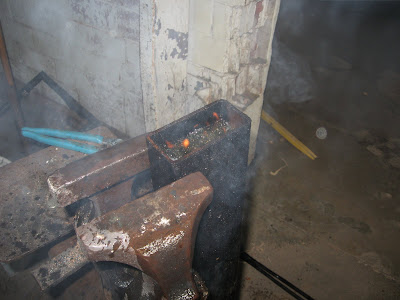 Looks kind of ugly with all the baked-on oil. 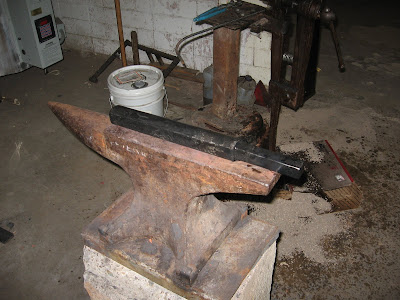 Looks a lot prettier with it cleaned off and after drawing temper. 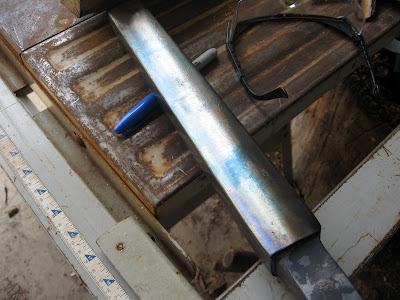 The texture left from the scale of heat treatment can't stay, though. It has to be absolutely smooth. I took it to this level, but the customer finished it out to where he needed it to be for his work. 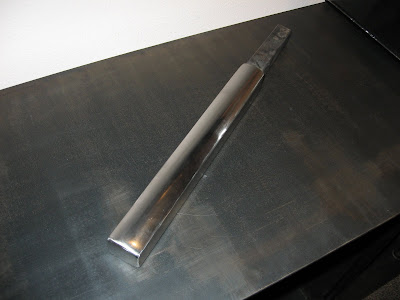 And the satisfied customer. Now to go work on making the other stakes. 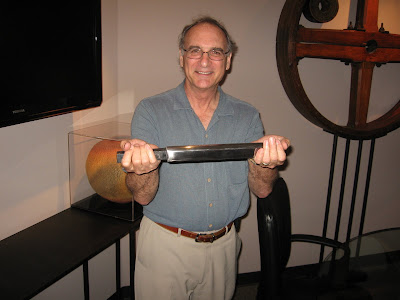 Posted by Helm Enterprises, Forging Division at 10:05 AM No comments:

As a way of helping out my students who are setting up to do forging on their own, I have done a group order in the past for Larry Zoeller burner kits and wool insulation so that they can build their own gas forges. Now I am providing access to inexpensive beginner's block anvils for them as well, the same as the two block anvils I have set up in my shop. It took a bit of wrangling, but they are now cut and ready for pickup. 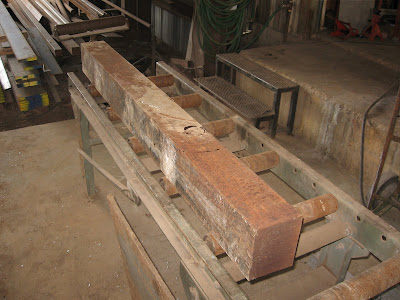 This is a lot bigger than anything in my shop can cut, but I cut a deal with a shop that I used to work for to let me use their big bandsaw to cut them into foot-long sections. I came to the shop this Saturday and spent a goodly chunk of the afternoon sawing. 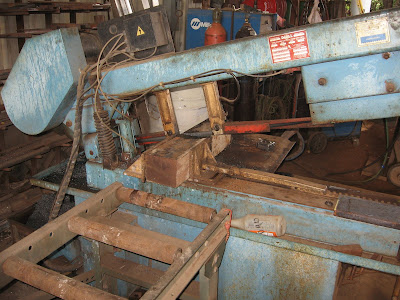 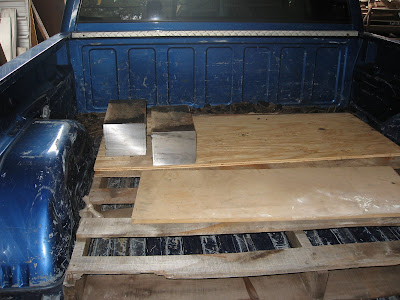 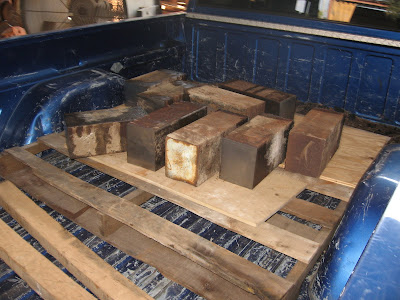 ... I got them all cut. There were ten anvils all told, but only nine in this picture because one student loaned me a trailer to get the steel out of the junkyard, and took the first anvil with him.

There are more anvils than ordered at the moment, but now I have them on hand for future students who want them. They need some cleanup and are a bit soft, but work quite well and are easy to repair if dented.
Posted by Helm Enterprises, Forging Division at 7:53 PM 1 comment:

Well, I finished up the story that goes along with the zombie killer wakizashi build. It was a little over 31 pages in Microsoft Word, double spaced. Written a bit hastily, but proofread several times. Read it here:

Sinking a copper basin for a baptismal font

Not everthing I make is sharp and pointy. Case in point, this large copper basin I'm working on for a baptismal font. Details are in the description.

This was a little knife I made for a customer who wanted to give it to her father for his birthday/Christmas. She wanted something along the lines of my personal carry work knife, but a scaled-down version. 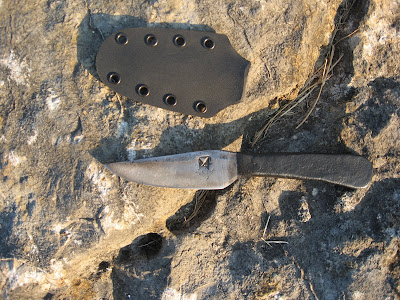 I stamped her dad's initials on the sheath. 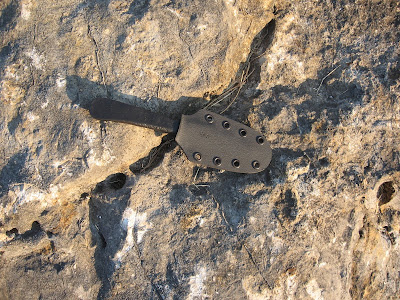 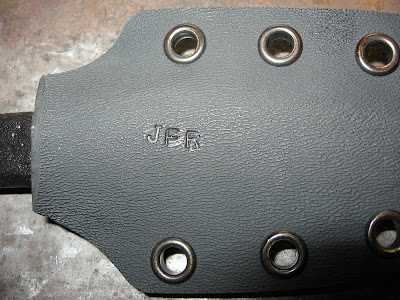 I took some in-progress shots. This forged out as beautifully as any of these work knives have. Here's the forged out blade with a cut off piece of the spring it began life as. 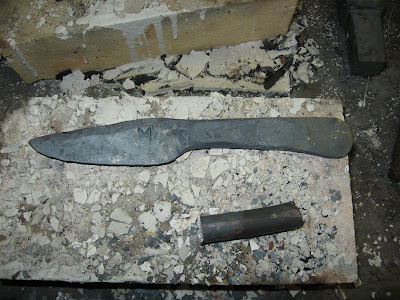 Me filing the primary bevel after cleaning up the profile a bit on my belt grinder. 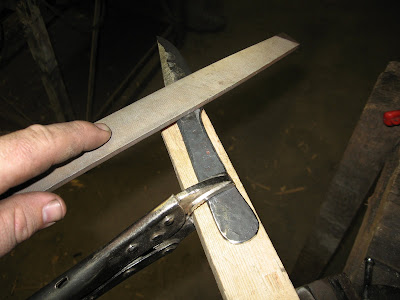 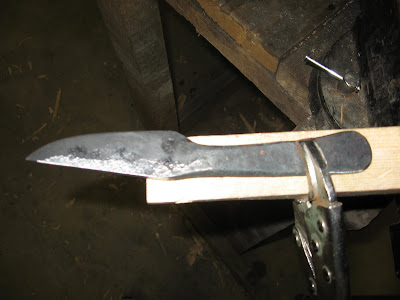 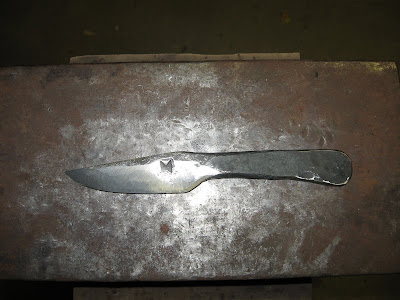 Working on the Kydex sheath. 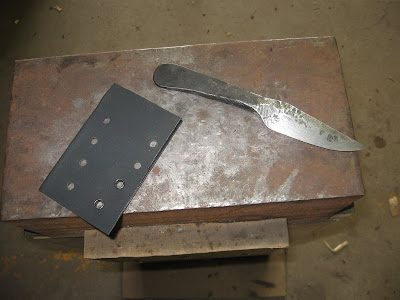 After forming it around the blade, tightening the rivets, grinding the profile of the sheath, and opening up the mouth of it some. 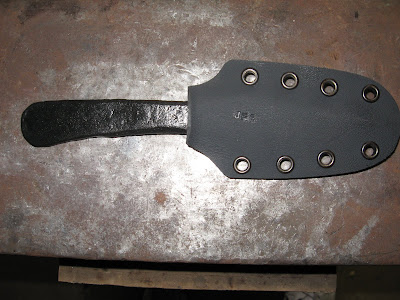 After this I sprayed the handle, let it set up overnight, and sharpened it.
Posted by Helm Enterprises, Forging Division at 7:43 PM No comments: