This is the one that actually started me on the path to making full tang tomahawks.  I'd been working on forged prototypes with nylon handles for a while, but still had questions in my mind, particularly about the handles.  Then the SEAL who has become my best customer asked about me making him a full-tang 'hawk, and it solved the issues I was having but meant that I'd need to do a major shift in my approach and work out the logistics for building it.

He asked about it late last winter, and I finally got his 'hawk to him in December.  Part of that wait was making sure I had it right, part of it was having one that would match his order being bought off my table at the Blade Show in June, part of it was waiting until I could have a sheath with it, and part of it was his work keeping him busy and away from e-mail.

But, I just heard back from him and he is happy with his tomahawk.  So, here it is.  :) 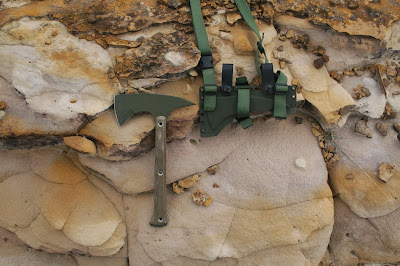 12" Wrecker (pry spike) model in olive drab with sharpened inner beard.  His was the first sheath I made for them, before I got the tooling together for the other two models.  He got it with the shoulder sling and IWB bands. 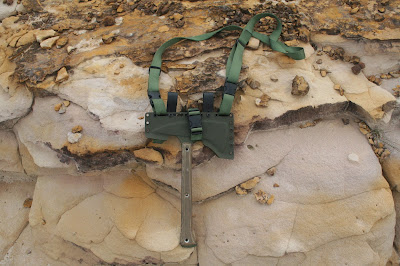 This shows the 'hawk better, but is taken before I moved the IWB bands to their final position. 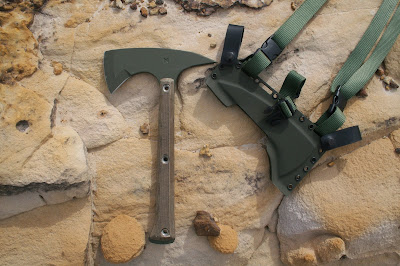 Here's me using it to demonstrate the shoulder carry.  Note that there's a lot of adjustment to pull it up tighter, and that I moved the IWB bands from being on the corners to the inside of the shoulder sling later on. 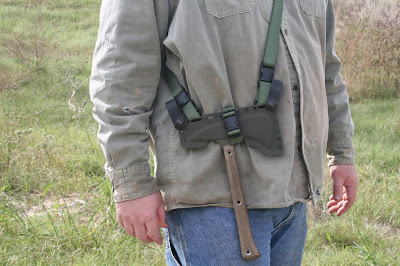 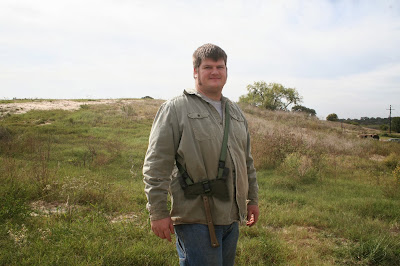 Not one to sit still on his time off, he told me he's been wearing it by the shoulder sling on a few hikes and barely notices it's there.

He also sent me a picture of a display case that his future brother-in-law made for him for some (not all) of the blades he's gotten from me.  I joke with him about charging into battle wearing a kilt made of my blades.  :D 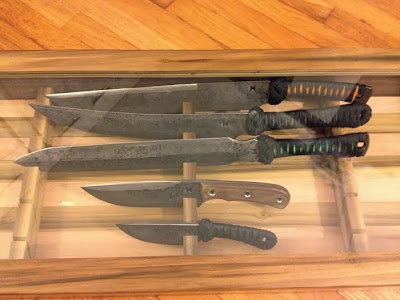