If you are asking about classes/lessons, I have not taught for several years.  Check info here:

Classes
By phone: (210) 209-1549  I have no problem discussing things on the phone and answering questions, and it is a good way to get a lot of information across quickly.  However, it's easier to refer back to what we had previously discussed with e-mail, so I usually ask that the customer e-mail me after the phone conversation to remind me what we had decided upon.

By e-mail:  helmforge@gmail.com  If you send me an e-mail, PLEASE LET ME KNOW YOUR NAME!  I have had customers that I have talked back and forth with for a good while and only find out their name when it comes time to ship the finished piece.  It's awkward on my end to not know what to call you.

I am a one man shop at the moment, so sometimes the secretarial duties get a bit neglected.  If you haven't heard back from me in a timely fashion, please send me another message.
Posted by Helm Enterprises, Forging Division at 9:38 PM 5 comments:

Workin' for the weekend.

I'm getting married on Saturday.  Between now and then I need to finish up these: 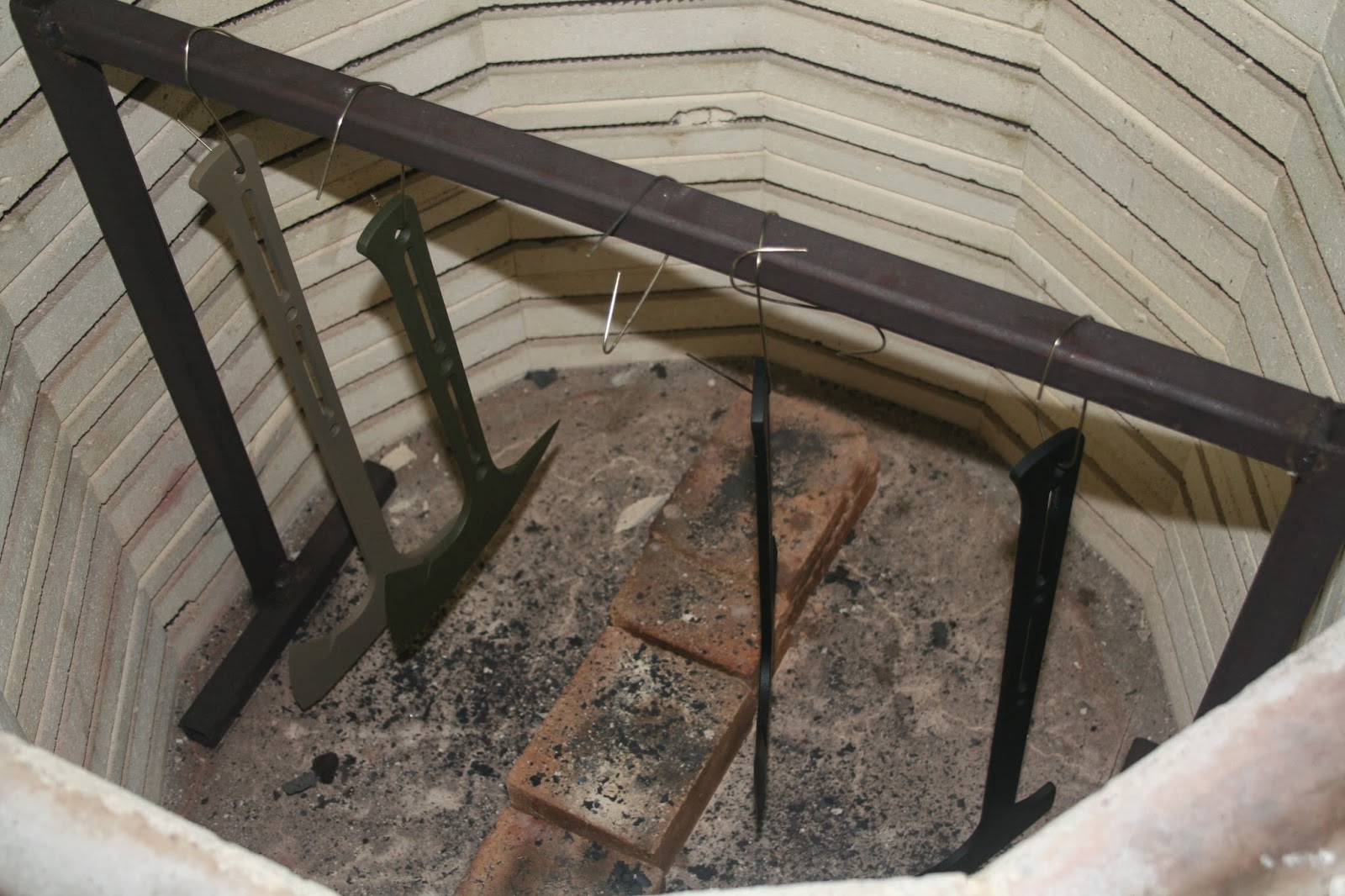 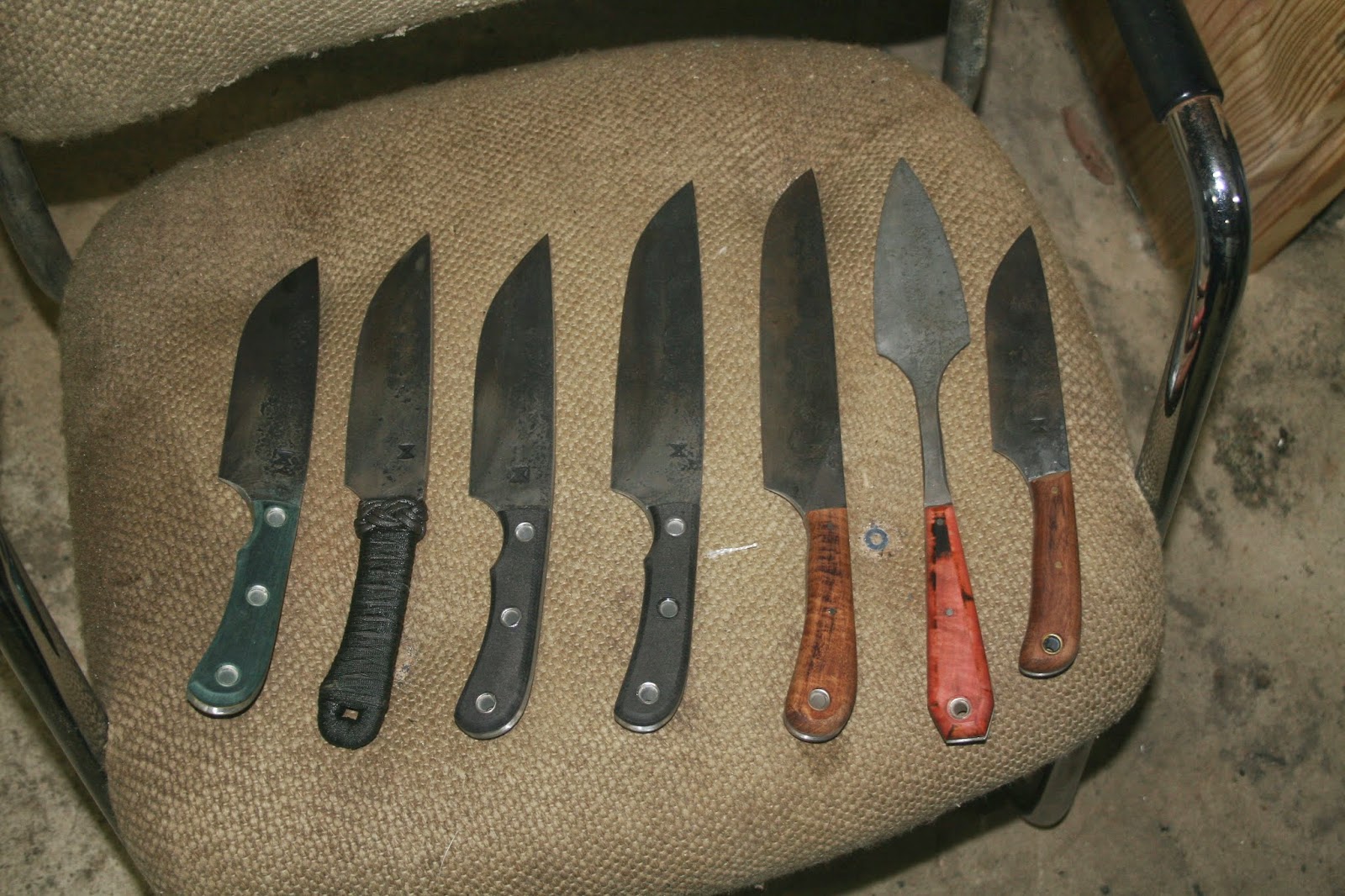 All the 'hawks and five of the knives need Kydex sheaths.

If everything keeps going as smoothly as it has been, I can pull it off, though I will probably be taking them with me to mail to customers from the honeymoon trip.  My loverly bride-to-be, bless her heart, is ok with this.  :)
Posted by Helm Enterprises, Forging Division at 8:30 PM No comments:

I just had an article by Joe Flowers come out in the July issue (yes, already on the stands in March!) of Tactical Knives Magazine.  He reviewed a bush sword and companion knife that I made for him with an ambidextrous, modular leather sheath rig by Luke Swenson (www.swensonknives.com).  I've had several e-mails and calls congratulating me on the article and asking questions after reading it.

The photos by Terrill Hoffman are terrific, but they're in black and white and don't convey the retina-searing neon lemon color of the paracord wrap on the handle.  I chose the color after seeing another article Joe wrote about a river rafting knife that also had a bright yellow handle for high visibility. 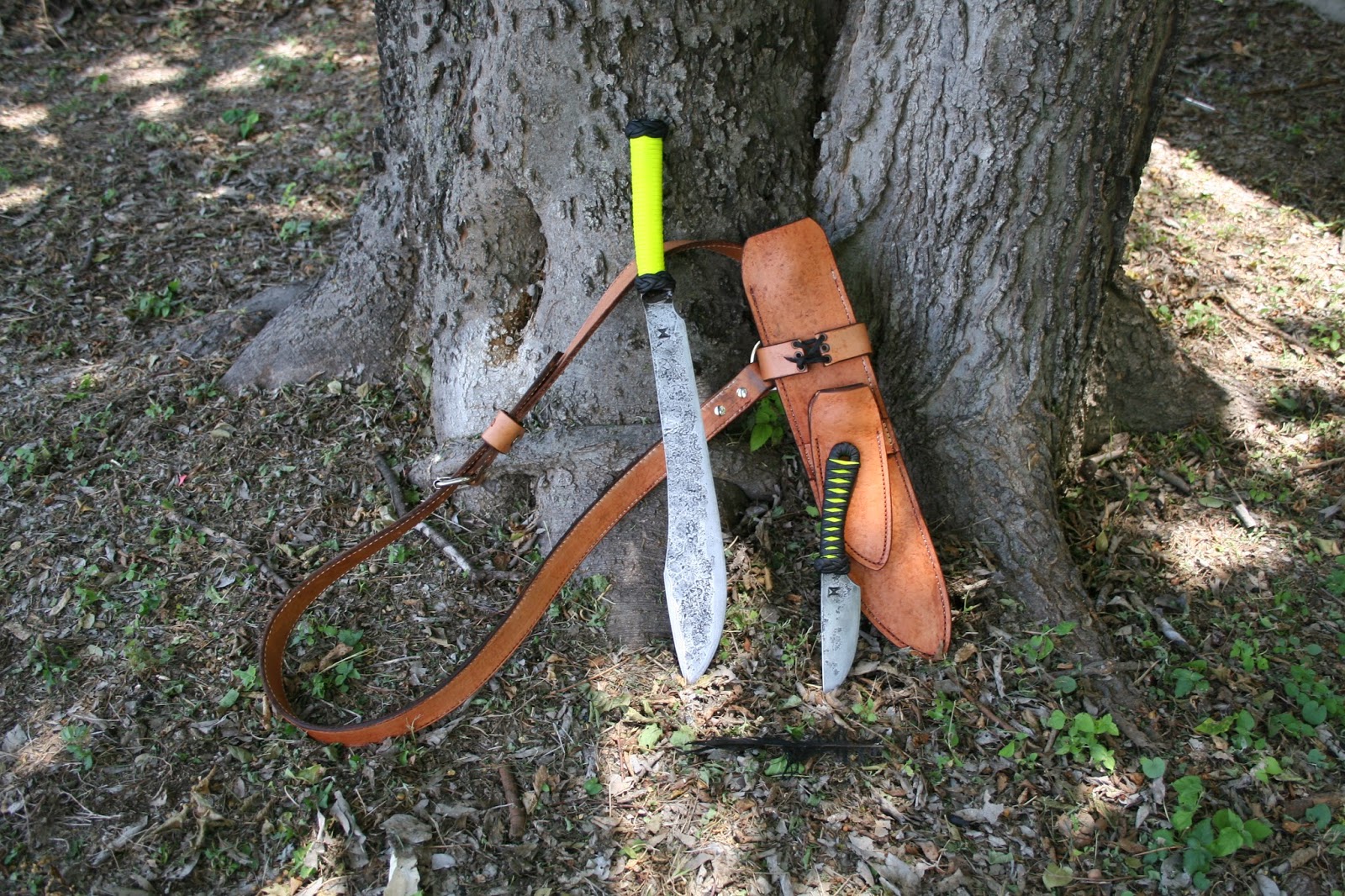 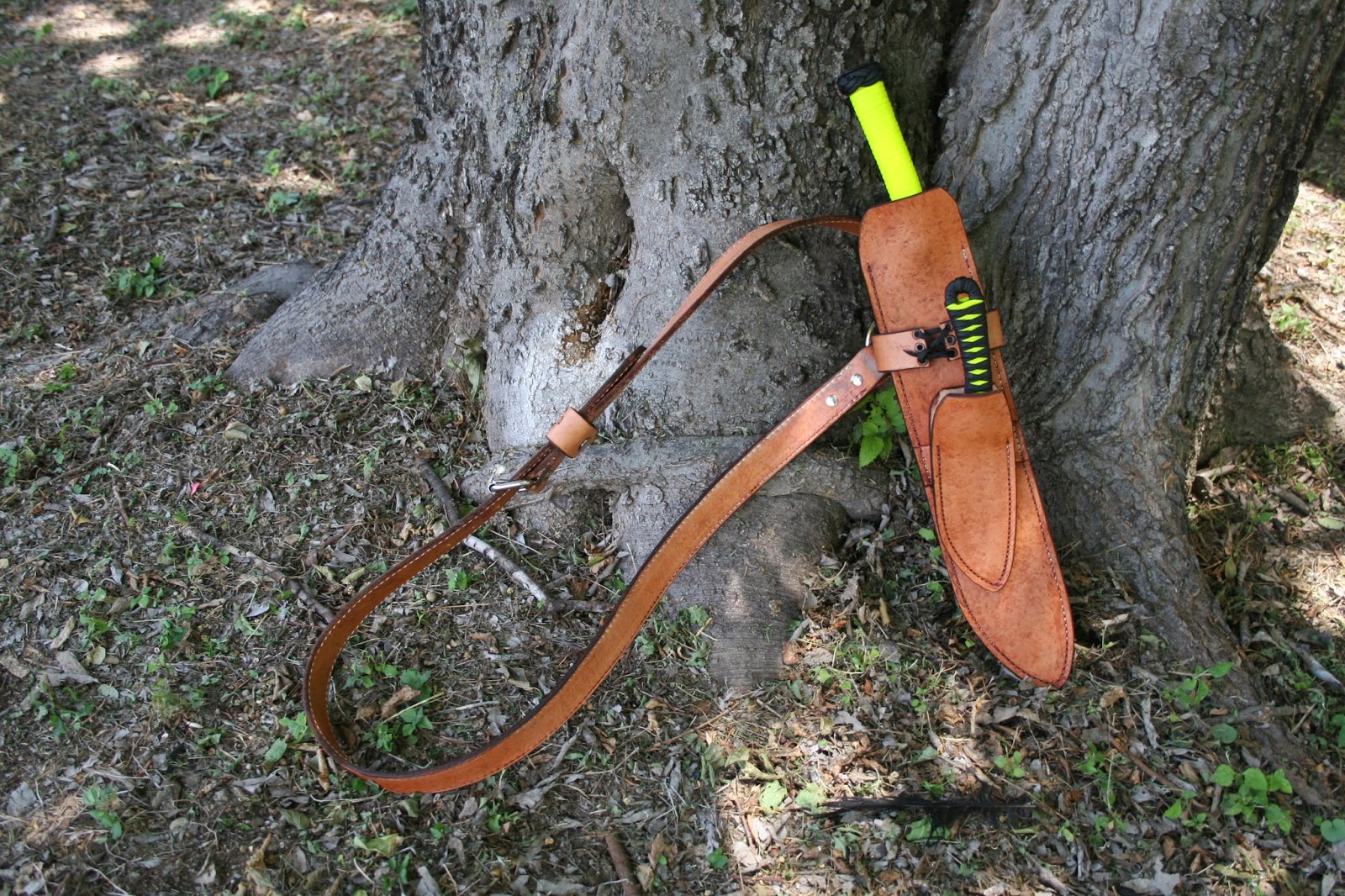 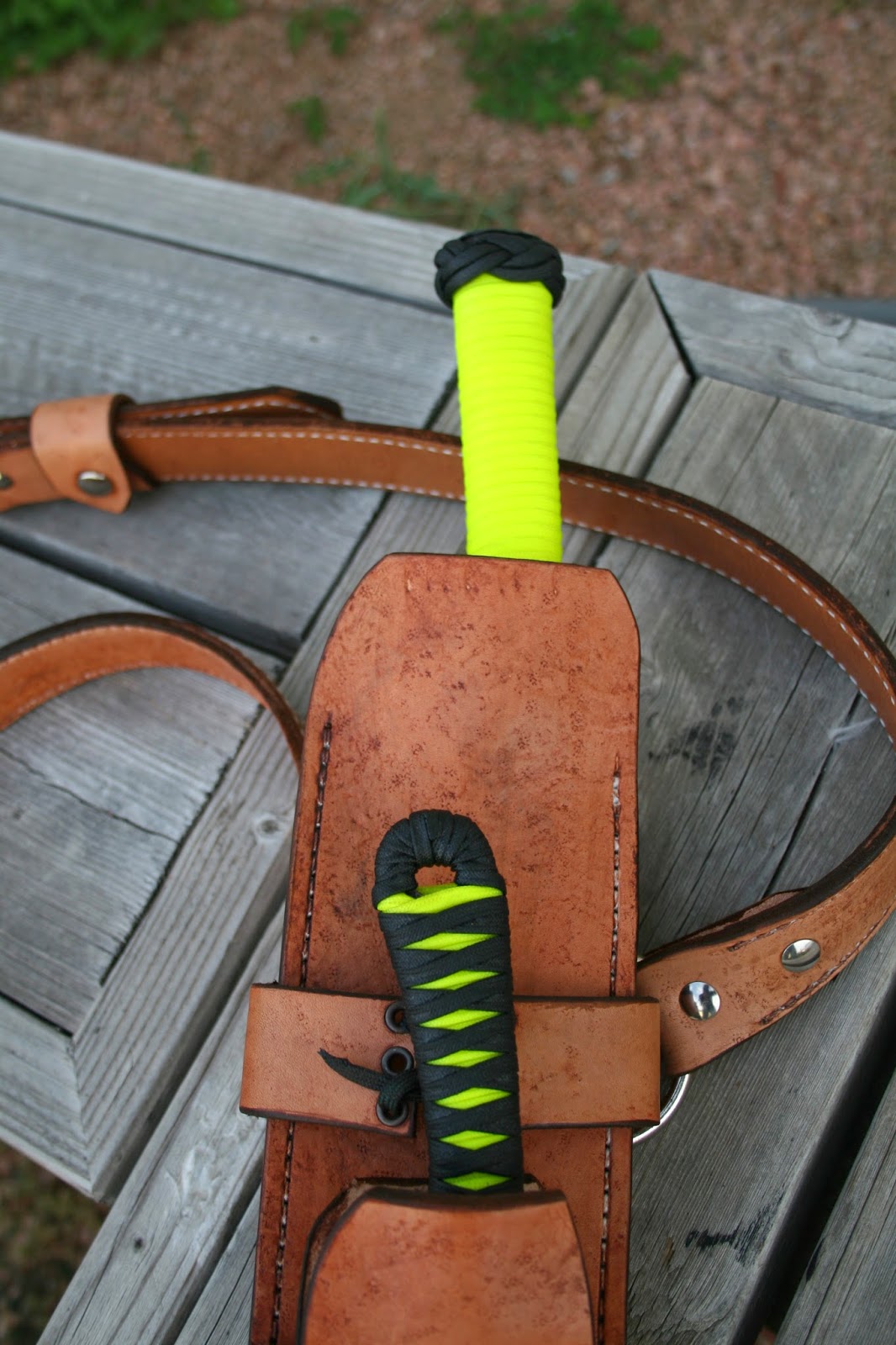 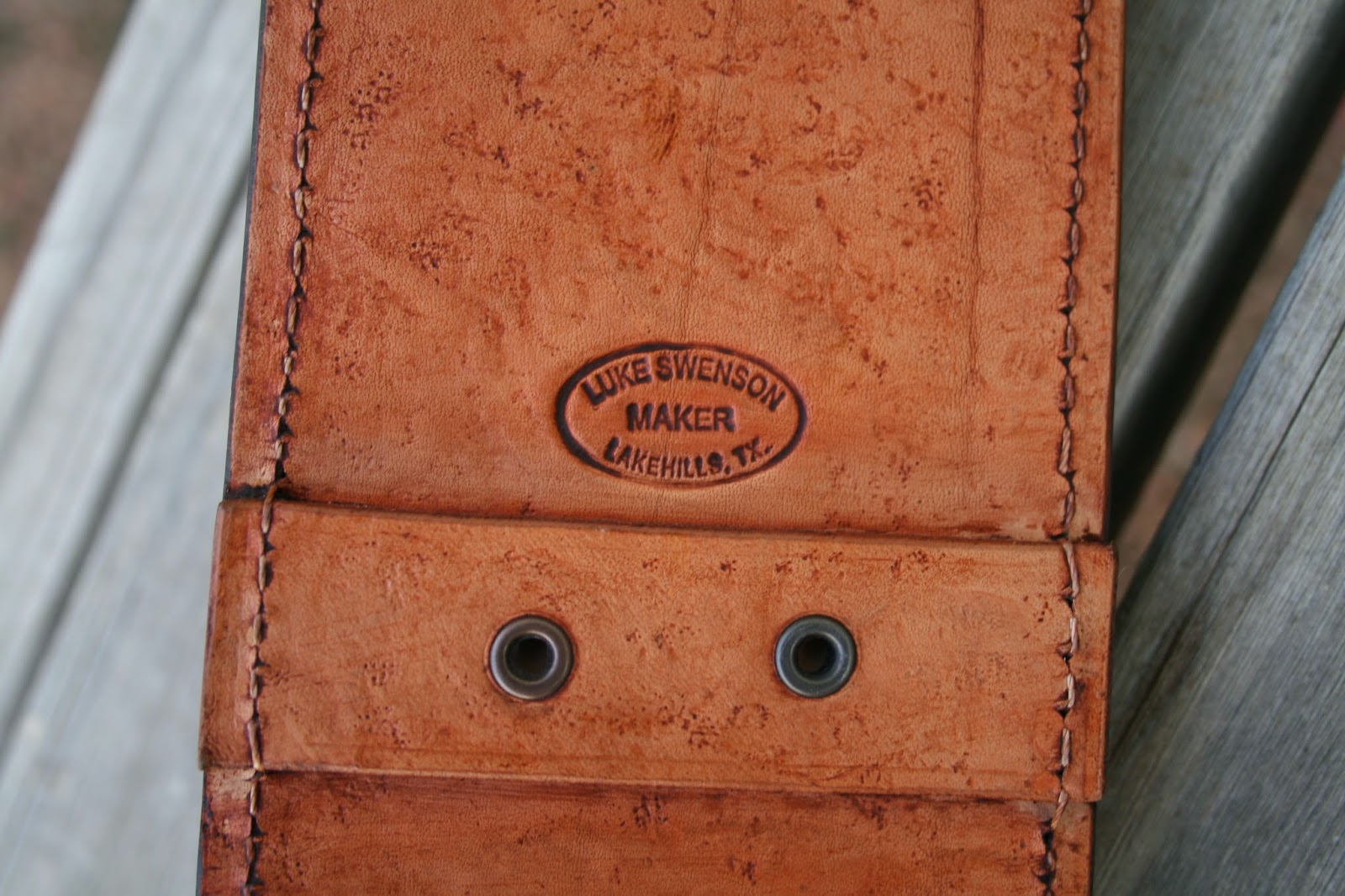 A nice personal touch from Luke. 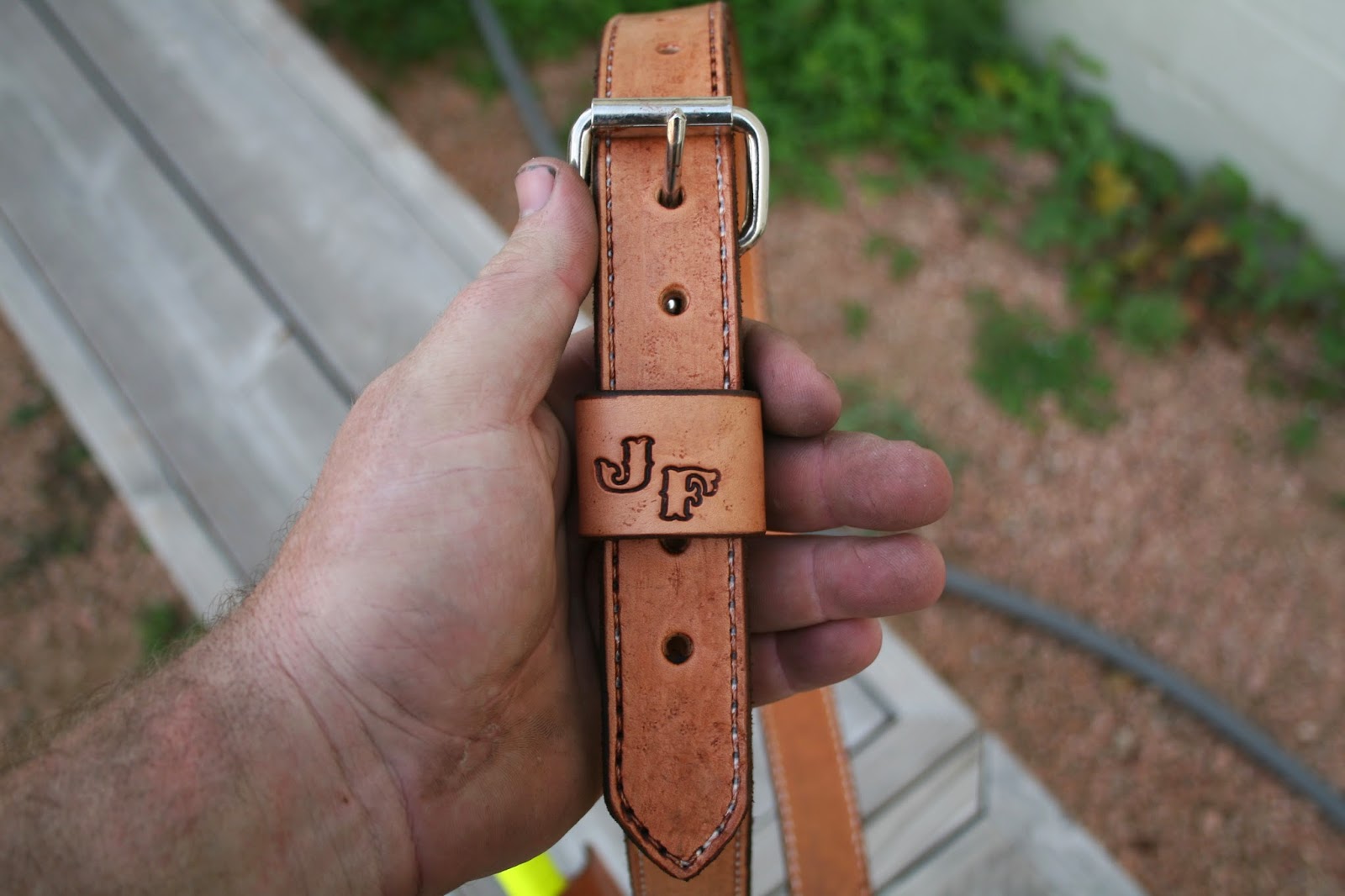 We also made a rig at the same time for fellow TK writer Reuben Bolieu.  In contrast, I used retina-searing neon orange paracord for his.  I found out later that he likes orange tools for working in jungle as it shows up easily if dropped among leaves.  He's posted on various forums photos of the rig being used to cut wood for fires and shelters, cutting good-sized logs to build a raft, making shavings for fire starter, clearing tall grass, etc.  Here it is with him on a trip to Peru: http://www.bladeforums.com/forums/showthread.php/1003545-Peru-2012-Fall-Class-Part-2?highlight=raft 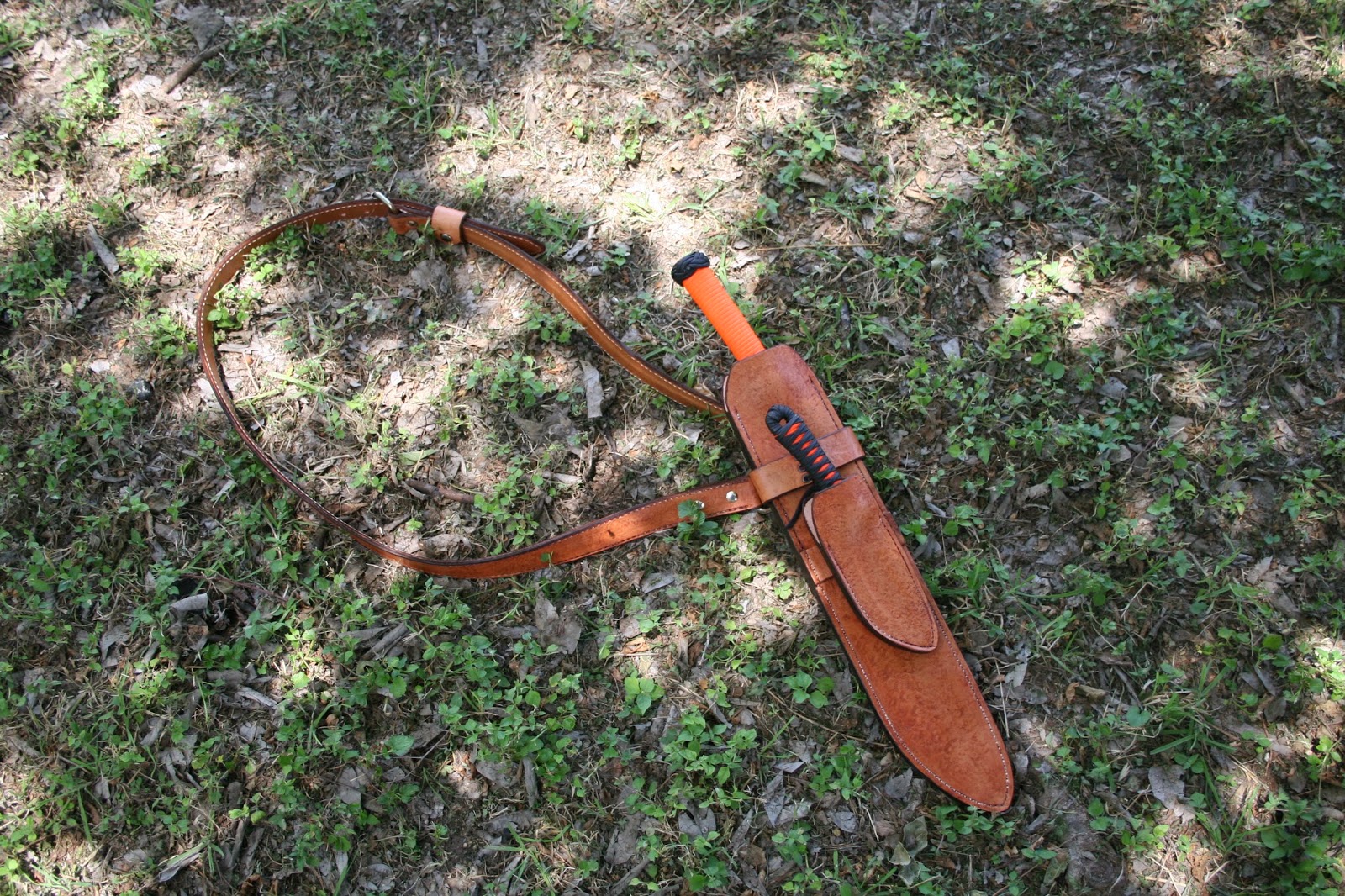 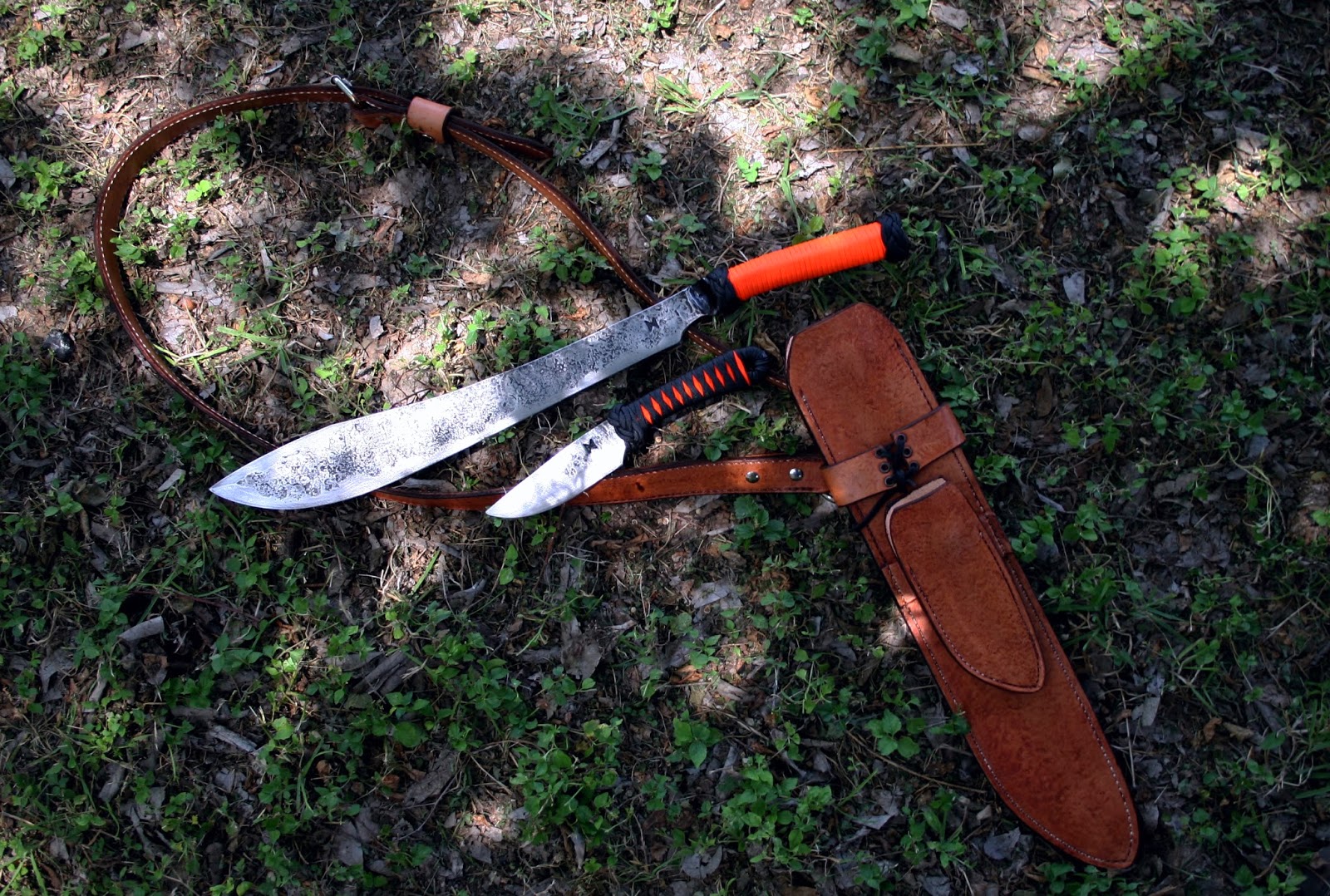 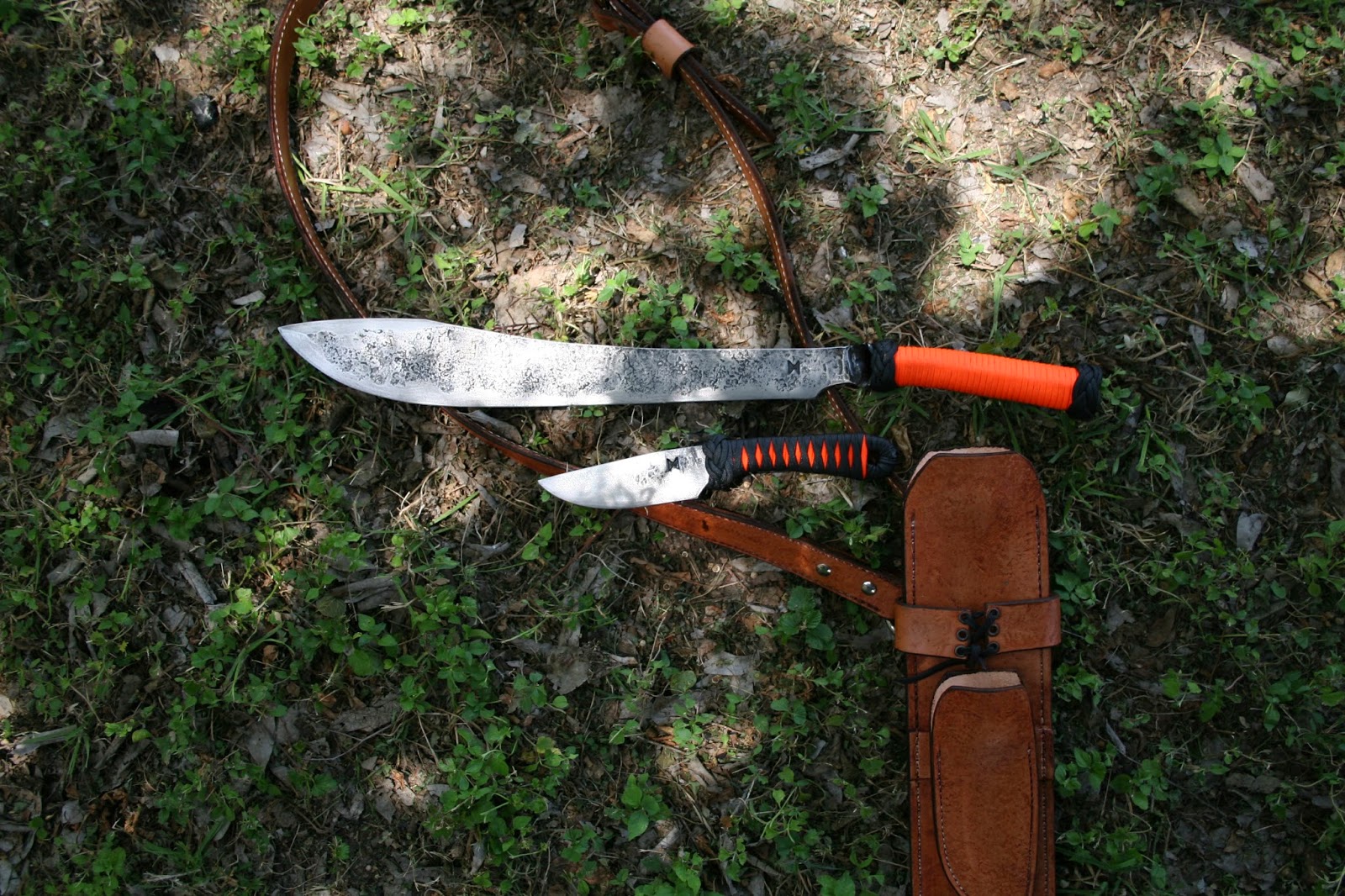 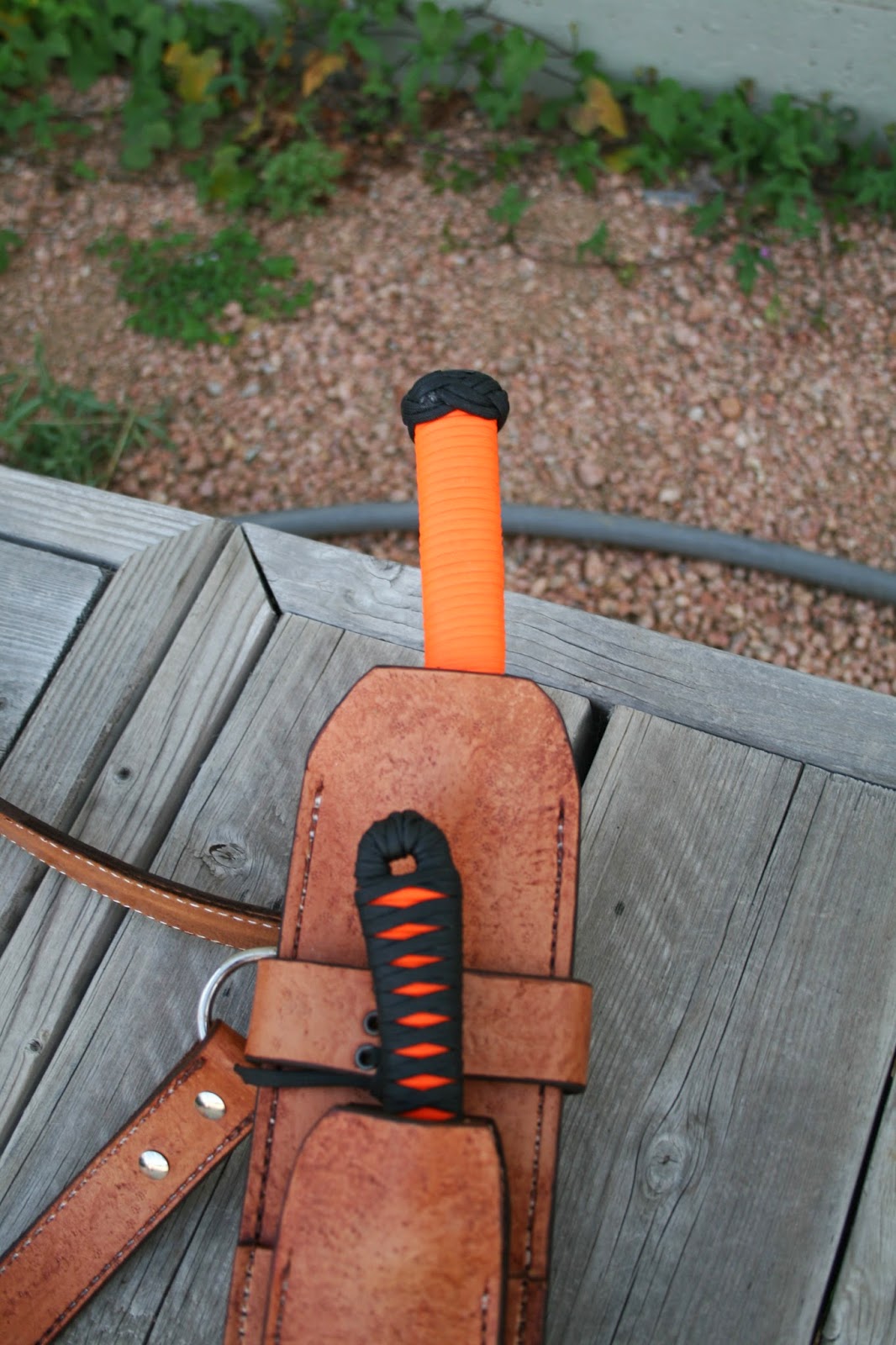 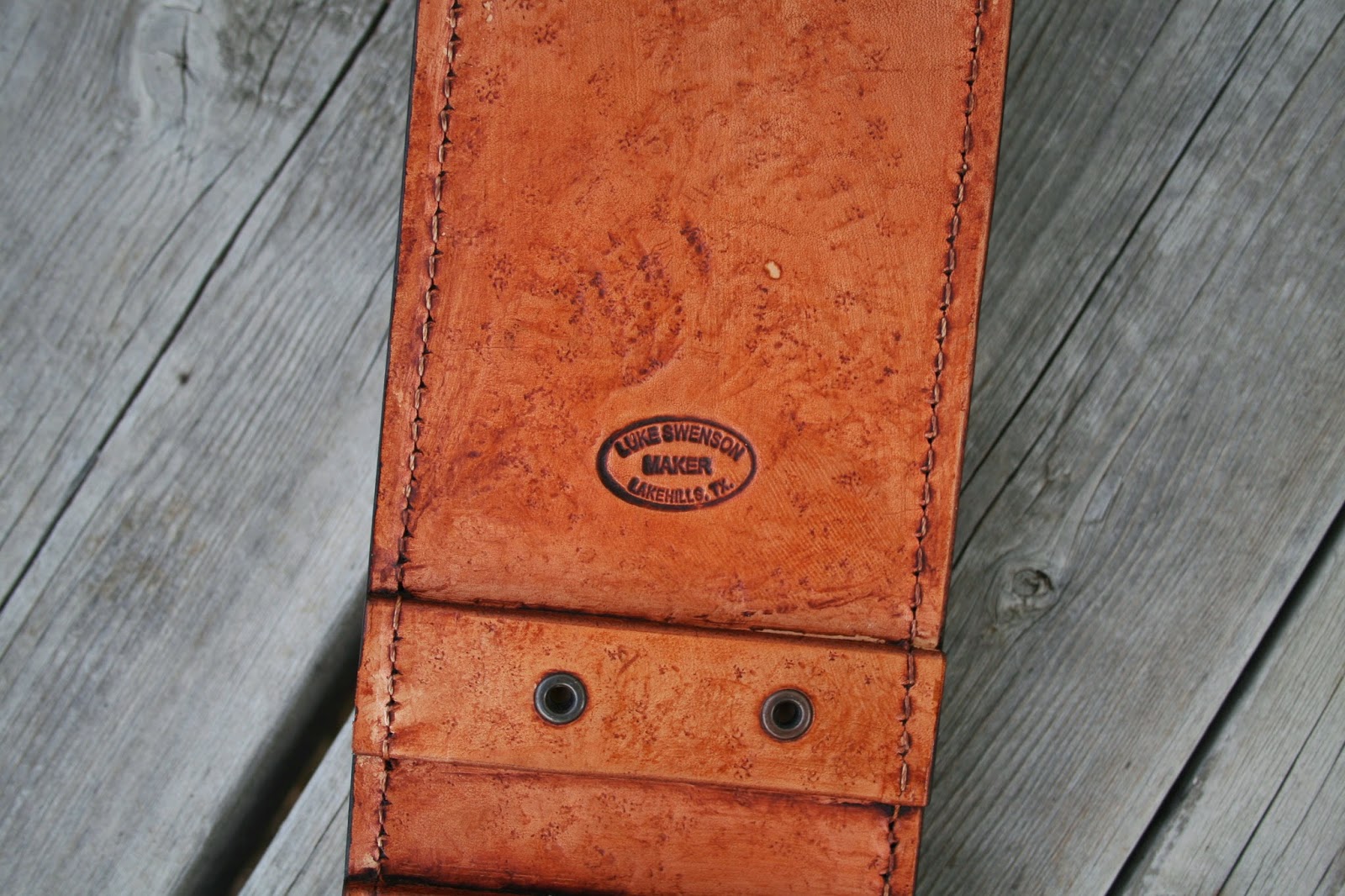 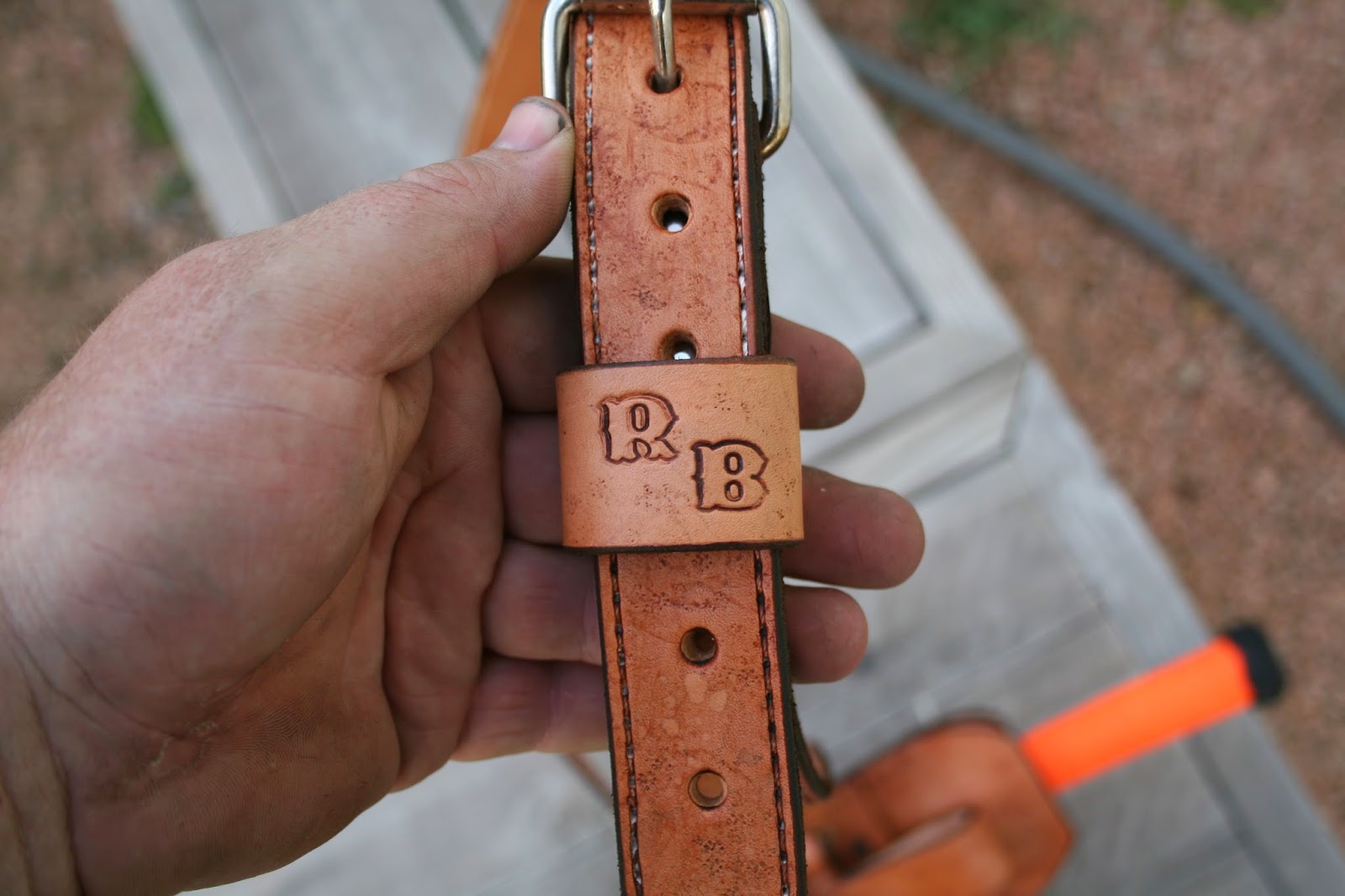 I handed over the rigs to these two gentlemen at the Blade Show.  Here's Joe with his: 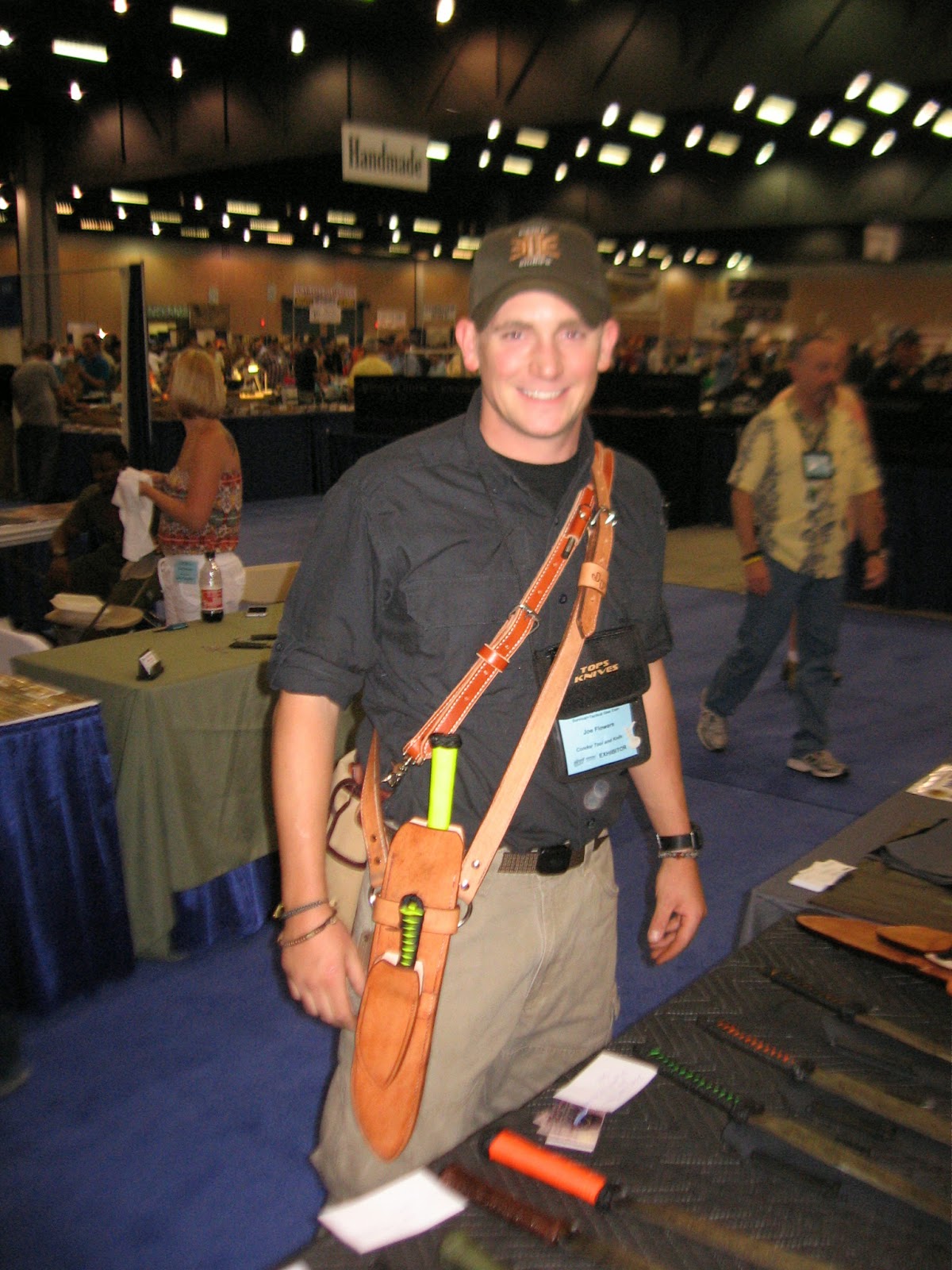 And, from left to right, Luke, Reuben, and me. 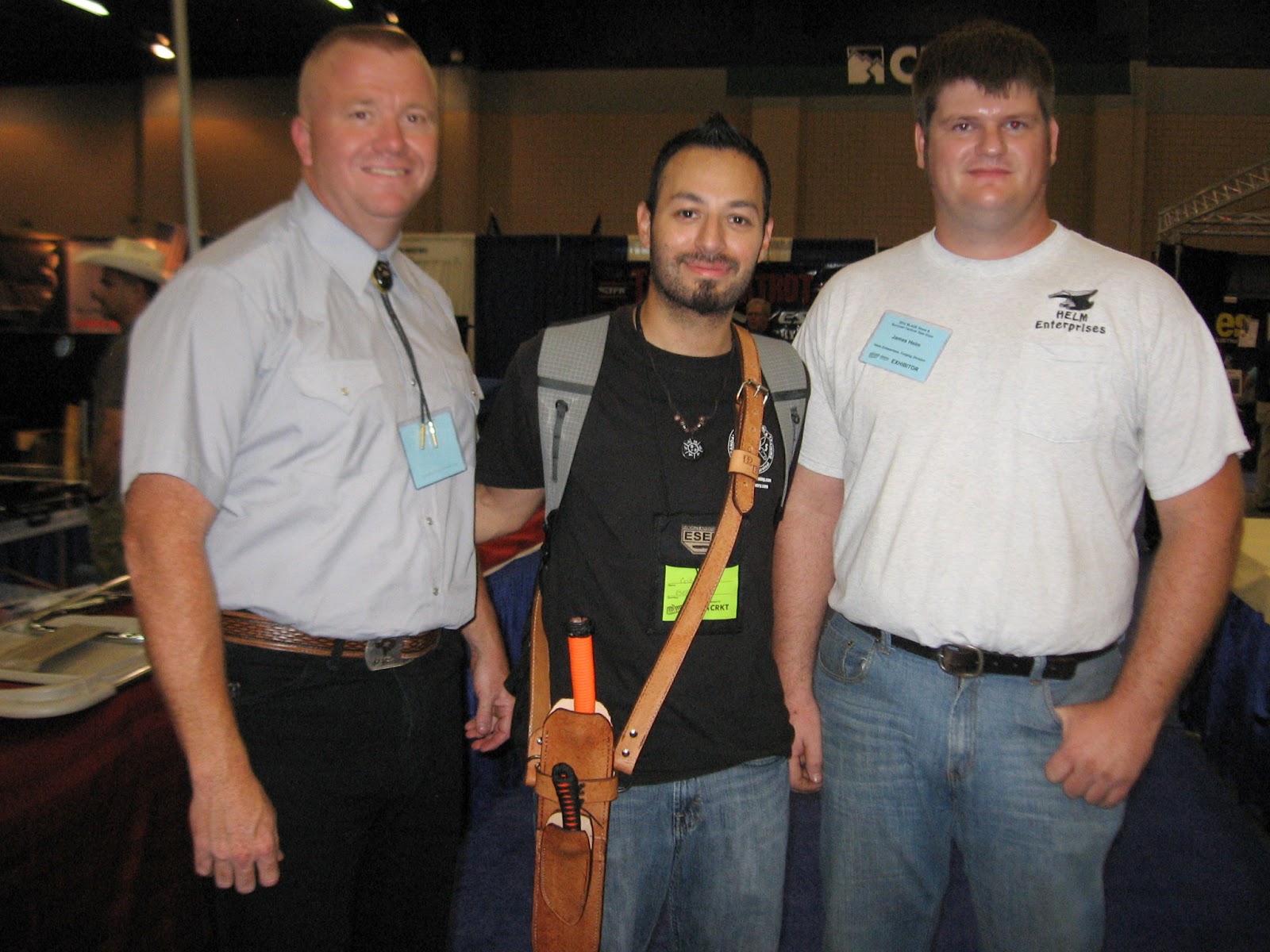 I'm getting married on March 29th (WOOHOO!!!).  I've been putting in some long days trying to get as much work finished up and off to customers before then as I can, and have gotten behind some in my e-mail correspondence.  So if you haven't heard back from me as quickly as I should answer, please be patient and give me another ping.  I'll try to get back with you ASAP.

On a related note, I will be taking my laptop with me on my honeymoon so that I can answer e-mails, but don't be surprised if there's a delay then too.  I intend to be very occupied.  :D
Posted by Helm Enterprises, Forging Division at 8:51 AM 4 comments:

In support of Knife Rights' efforts in safeguarding the owners of all things sharp from pernicious legislation, I'm again donating to their yearly Ultimate Steel fundraising raffle.  Last year was a bush sword with a leather sheath rig by Luke Swenson.  This year, it's one of my Benghazi Warfighter model and a Kydex sheath I made for it.

The knife is 11 3/4" overall, with a blade length of 6 3/4" and a false edge about 2/3 the blade length.  It's forged from 1/4" 5160 that's been triple normalized, triple hardened, and triple tempered.  The handle is black canvas Micarta with flared stainless steel tubing rivets.

The point is a bit more aggressive on this particular one than what I've been making, and it's something I'm going to incorporate into the Benghazi Warfighter design. 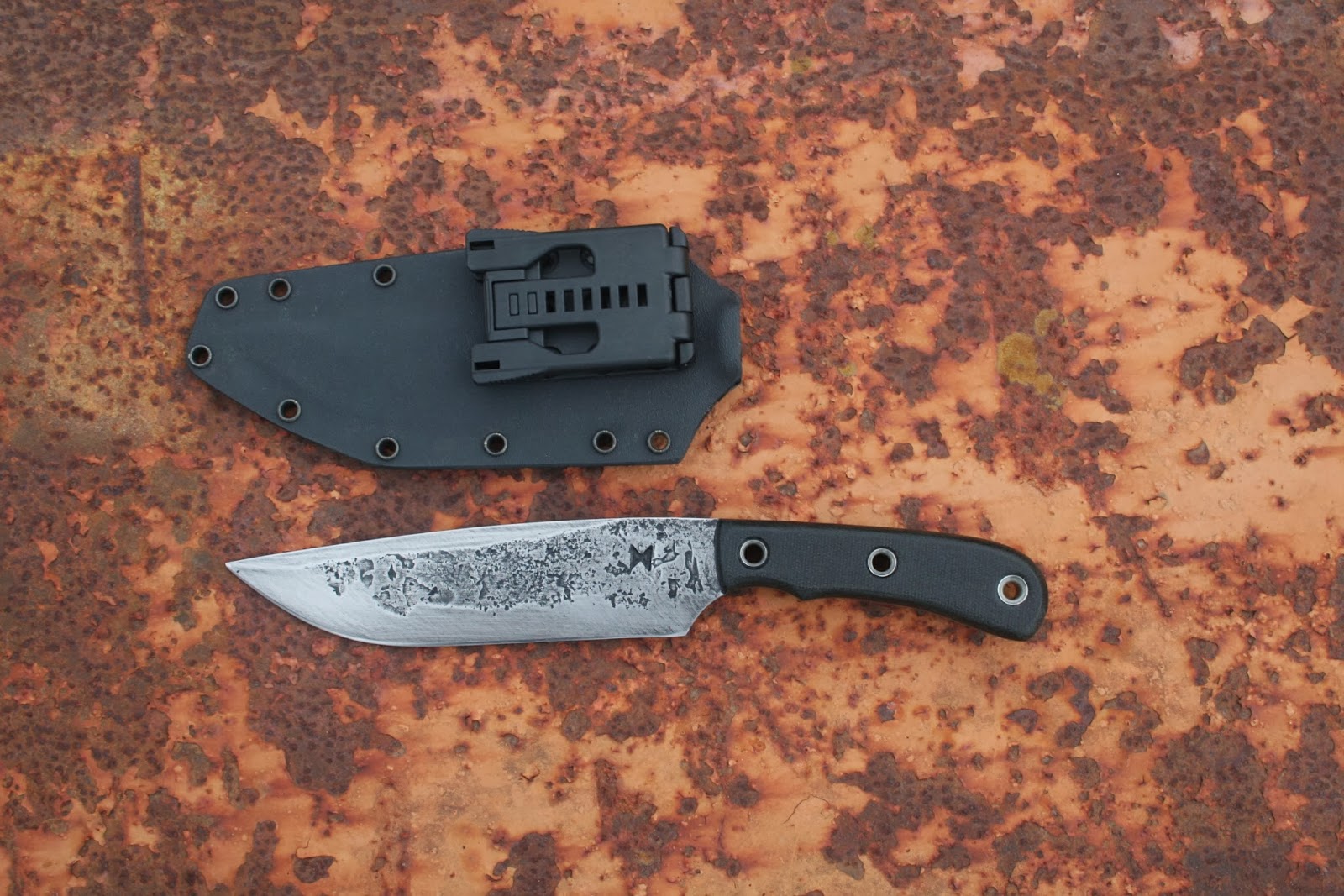 It comes with a black Kydex sheath with a large TekLok. 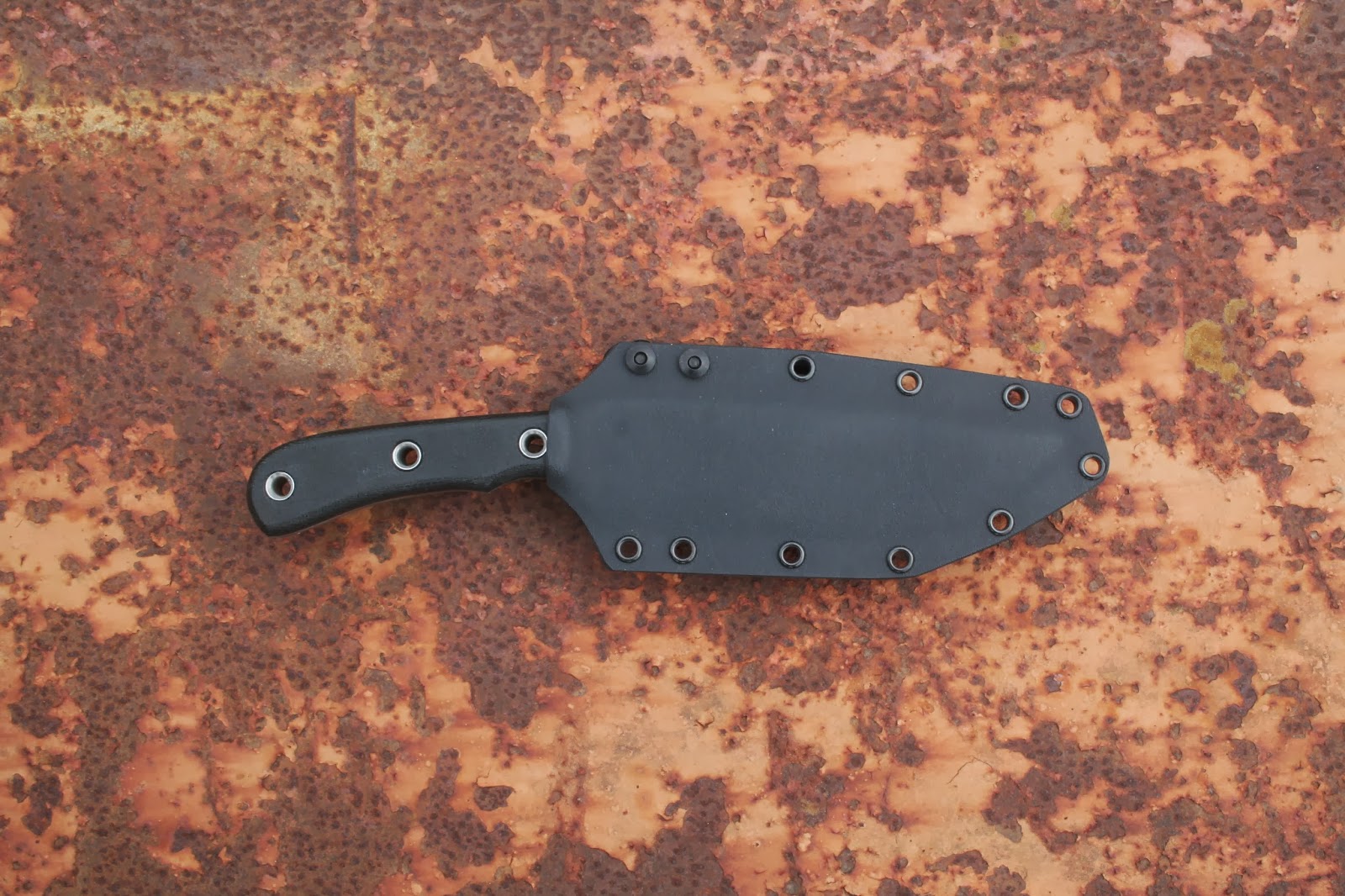 I appreciate Knife Rights' work and am glad to help them out.  I've seen their efforts to change restrictive laws here in my own state of Texas, and they are making a positive change for knife owners.  This set is on its way to them and will have better photos taken of it than what my own poor efforts can do, and I'll put up the better pics when I get them.