Interesting visitor to my shop

I got a text message on Friday from someone saying that he knew the son of my shop's landlord, that he was interested in blacksmithing, and could he come by. I told him I was a bit busy but that he could.

What I didn't realize until he got to the shop was that he was a 16 year veteran of the Marines (out now) named Max who was on a road trip that had lasted a month so far and taken him from Los Angeles to Portland, across to Tennessee, and was in San Antonio only briefly on his return trip to L.A. He had met the landlord's son at a party in L.A. I dropped what I was doing and we forged out a small knife blade. Max was really taken with my primal/tactical Bowie "Thunderdome", as well as a Ridiculously Large Bowie that I had forged out a day or two earlier, so I agreed that we could forge one out the next day, Saturday.

On Saturday, I cut out a couple of pieces of F-250 coil spring, and we got busy. Using my hydraulic forging press to straighten the spring and Gunnhilda, my power hammer, to do the heavy forging, we forged out a couple of large Bowies, one for him and one for me to demonstrate the process. After taking a break in the evening to eat some pizza and carve some pumpkins with my girlfriend and one of her friends, we got down to the stock removal. We finished that up, hardened three times in veggie oil, then started the blades on their first tempering cycle before calling it a night around midnight.

The next morning we started the second tempering cycle, had a leisurely breakfast of coffee, pork chop, and huevos rancheros at a cafe around the corner, started the third and final tempering cycle, and took a quick trip to see a couple of the Spanish missions San Antonio is famous for. My girlfriend met us back at the shop, where I snapped some pictures of Max and his knife, then shut down the shop to spend the rest of the day with my girlfriend while Max headed out of town. Before he left, Max gave me and my girlfriend, a nursing student, the medical kit he had carried as a combat medic in Afghanistan. We were both greatly touched by this generous gesture.

Here's Max enjoying a cigar and his new Bowie that he made in Texas: 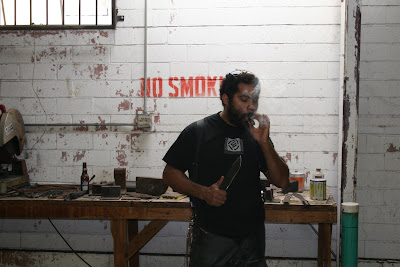 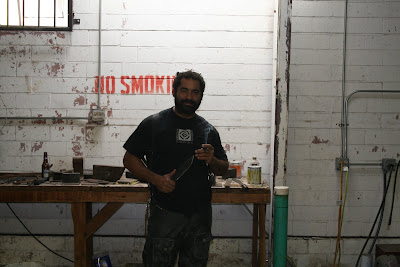 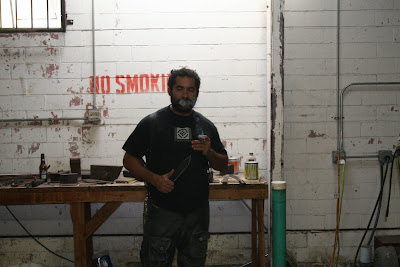 Here's what the Bowie looked like. We turned a missed hammer stroke into a notch for his thumb, and he was very pleased with the result. We established the secondary bevel on my belt grinder before he left, and he will clean off the baked-on oil, wrap the handle, and sharpen it back in L.A. This thing is a working knife, and balanced a bit ahead of the blade/tang transition. It'll chop, but it'll fight well too. Max knows how to handle a blade, and I'd hate to be on the other end in a fight. 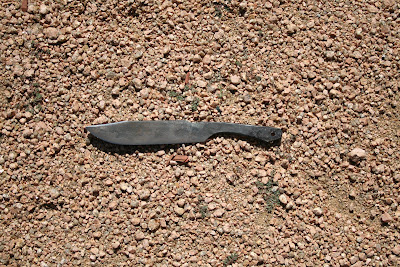 I didn't get to measure the blade before he left, but it was approximately as long as the one I made to demonstrate, which is 12" overall with a 7" blade. 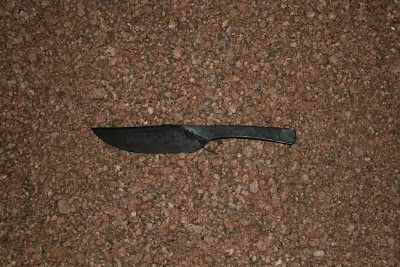 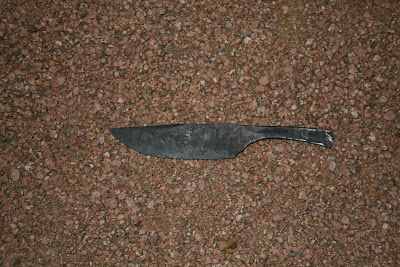 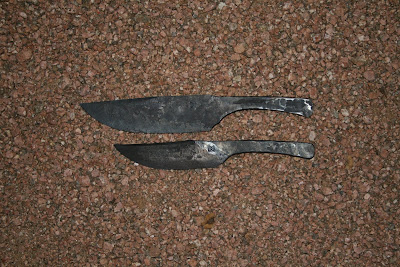 I was very glad to meet Max, and he is welcome back at my shop any time he's in San Antonio again! :)

P.S. - I was going to wrap the handle of the Ridiculously Large Bowie in neon orange paracord and name it "Subtlety", but Max said he had seen enough paracord for a while and ordered up hemp with amber shellac instead. :D
Posted by Helm Enterprises, Forging Division at 11:04 PM No comments:

Where has Helm Enterprises, Forging Division work gone to?

As more of my work gets spread to the far corners of the earth, I thought it would be fun and informative to keep track of the places I have sent my work. So, in alphabetical order, the different countries and states my work has ended up:

If you have bought something from me and don't see your region listed, just post a comment below and I'll remedy that!
Posted by Helm Enterprises, Forging Division at 7:57 PM 5 comments:

The brown-handled primal Bowie I had listed for sale was bought, and the customer asked if I had a recommendation for getting a sheath made. Of course, I recommended Noah Legel of Wasteland Leatherwork. As usual, Noah delivered! 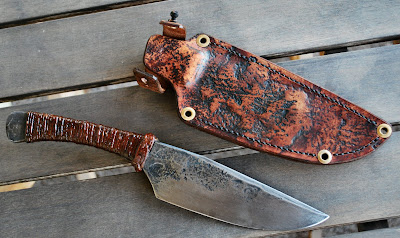 Check out more pictures, including work in progress shots, at The Wasteland Crow Project , the collaboration of our work.
Posted by Helm Enterprises, Forging Division at 7:37 PM No comments:

This one was commissioned by a fellow who goes bow hunting in Colorado. He tells me that it seems every deer or elk that he shoots ends up in the thickest patch of brush they can find. He needed a relatively short, capable blade to aid in extracting them from the tangle, split some firewood, and possibly quarter out a game carcass. He liked what he saw in the Youtube video I shot of this blade: 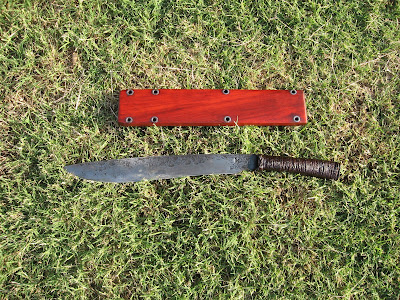 Taking that as a general starting point, I decided on a blade between 13 and 14 inches in length, with a slight drop for chopping power while still being able to handle the whippy, thorny vines and branches. This is what I forged out: 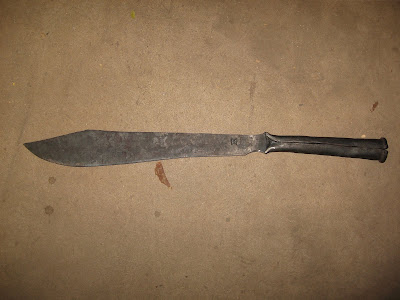 I checked with him to make sure that he like what he saw, and to see whether he wnted me to take a bit of the drop out or round the top of the clip rather than have it angular. He approved, so today I finished cleaning up the profile, filing the bevels and false edge, and am in the process of heat treating it.

Ready to heat treat after grinding, filing, tweaking, and filing some more: 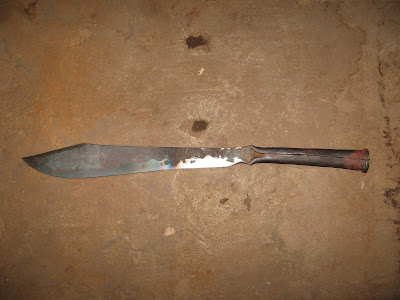 After triple quenching in veggie oil: 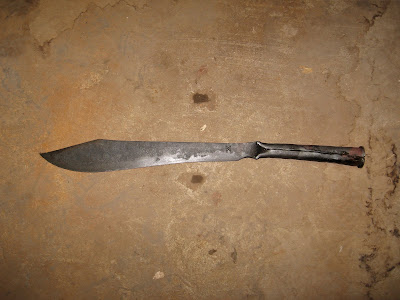 It's currently in its second tempering cycle out of three. The steel is 5160.

I've seen pictures of historical hunting swords built along these lines, though with longer blades. It always seemed to me that it would be easier to dispatch game with a stab than chopping, which is what this design seems aimed at. It occurred to me while I was working on that that perhaps those types of hunting swords were designed for the same purposes as this, namely extracting game from tangled branches and brush, as well as camp chores and quartering the carcass. Anyone know for sure about this?
Posted by Helm Enterprises, Forging Division at 7:53 PM 1 comment:

Bush sword put through its paces

This was the bush sword I traded for a bullwhip a few months ago. Tony has been giving his bush sword (and his arm) a workout!

"While out scouting for deer sign, I found the cottonwood that had been blown over the trail earlier this year. It was still alive since the leaves are green and the roots are half in the pond. The way it was laying was the roots are at the pond 20 feet from the trail. The trail is about 10 feet wide with a bank that goes down 10 feet to a small creek. the other bank is a good 30 feet away where the top of the tree is. So, the tree was about 60+ feet.
I thought I would give Stormcrow's BushSword and my arm a good workout. I'll let the pics do the talking.
Here it is just after beginning. I did a few chops before thinking about snapping pics. 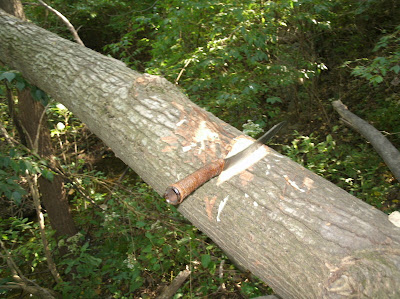 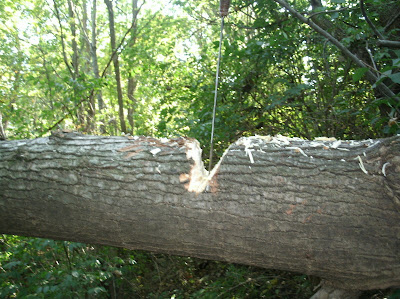 After 20 minutes and a small break it started popping and creaking like it was going to give way: 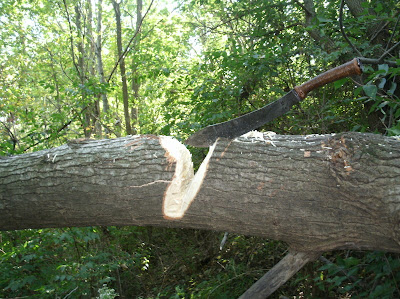 After the 20 minutes and 5 more chops it snapped. 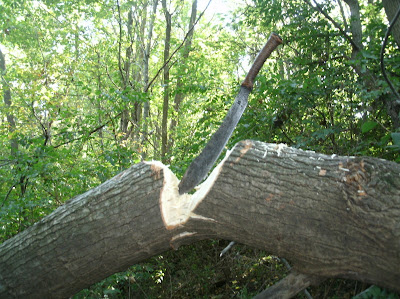 I then worked at it for 10 more minutes to get it all the way down. 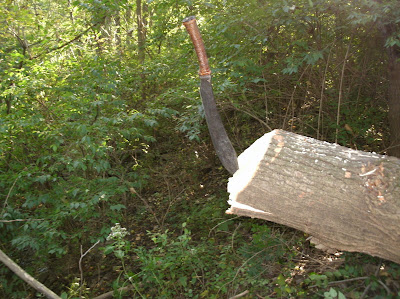 Overall, the BushSword performed better than I expected at chopping through a large tree. I did not measure the trunk, but it is the biggest I've chopped through with a machete. Being cottonwood, and green, helped a bunch, but it was no small task for a big bladed knife. I thought that the wrapped handle would tear up my hand, but it did not. The edge held up really well. I ran it across my sharpening steel a few licks and it was as good as new.
Well Done, Stormcrow, for a magnificent blade!

I'm quite thrilled to see my work tackle such a big task and pull it off so well. That's what I make 'em for, to be good brush tools. I've never tried to take on a tree this big with my blades before. Cottonwood is soft, but that is still a lot of chopping!
Posted by Helm Enterprises, Forging Division at 11:16 PM No comments: