Got a bit of cutting video.  Unfortunately, the button didn't get pushed during the 2" x 4" chop.  :(  But it cut over halfway through with each swing.


Posted by Helm Enterprises, Forging Division at 9:01 AM 1 comment: 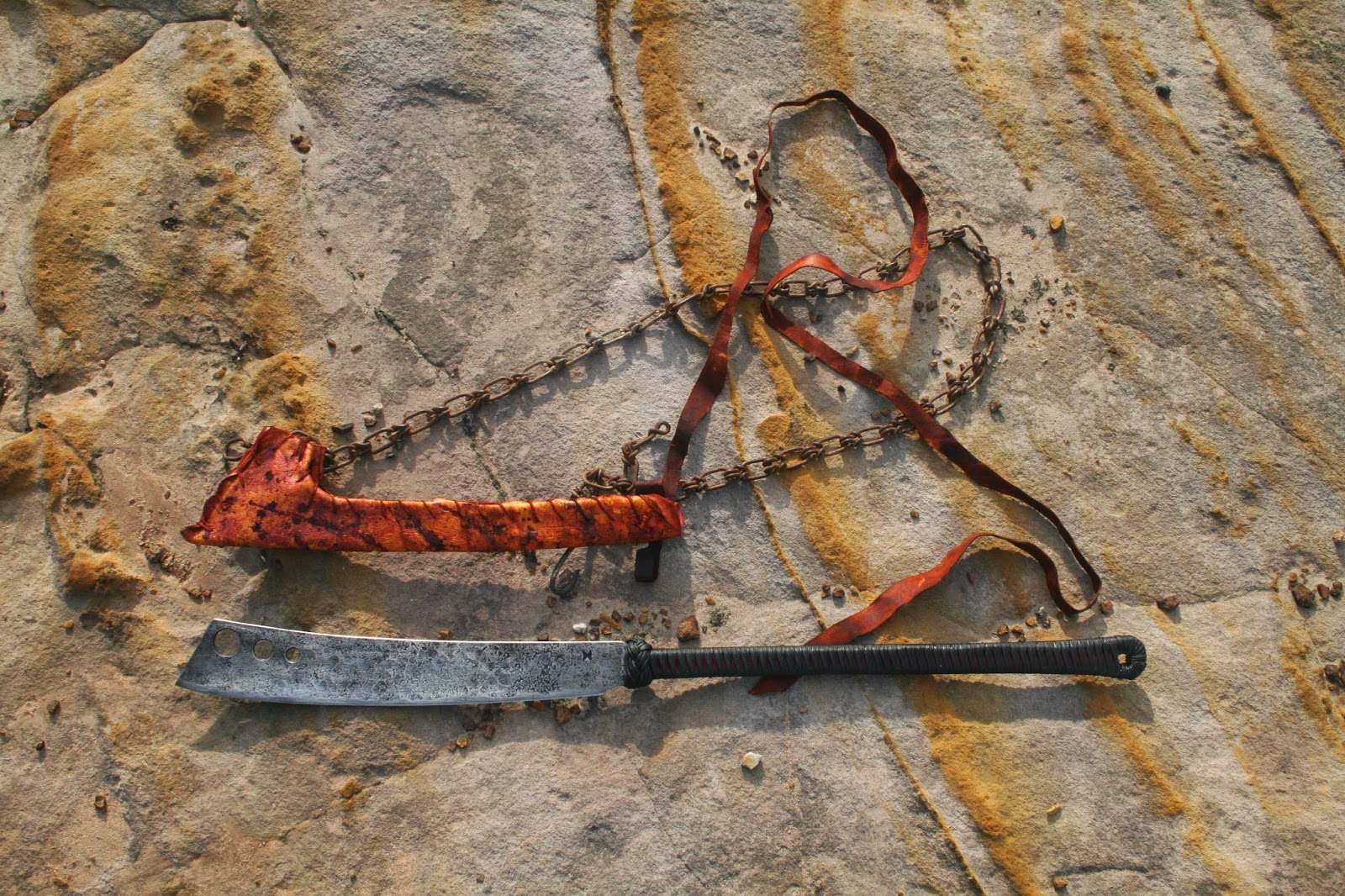 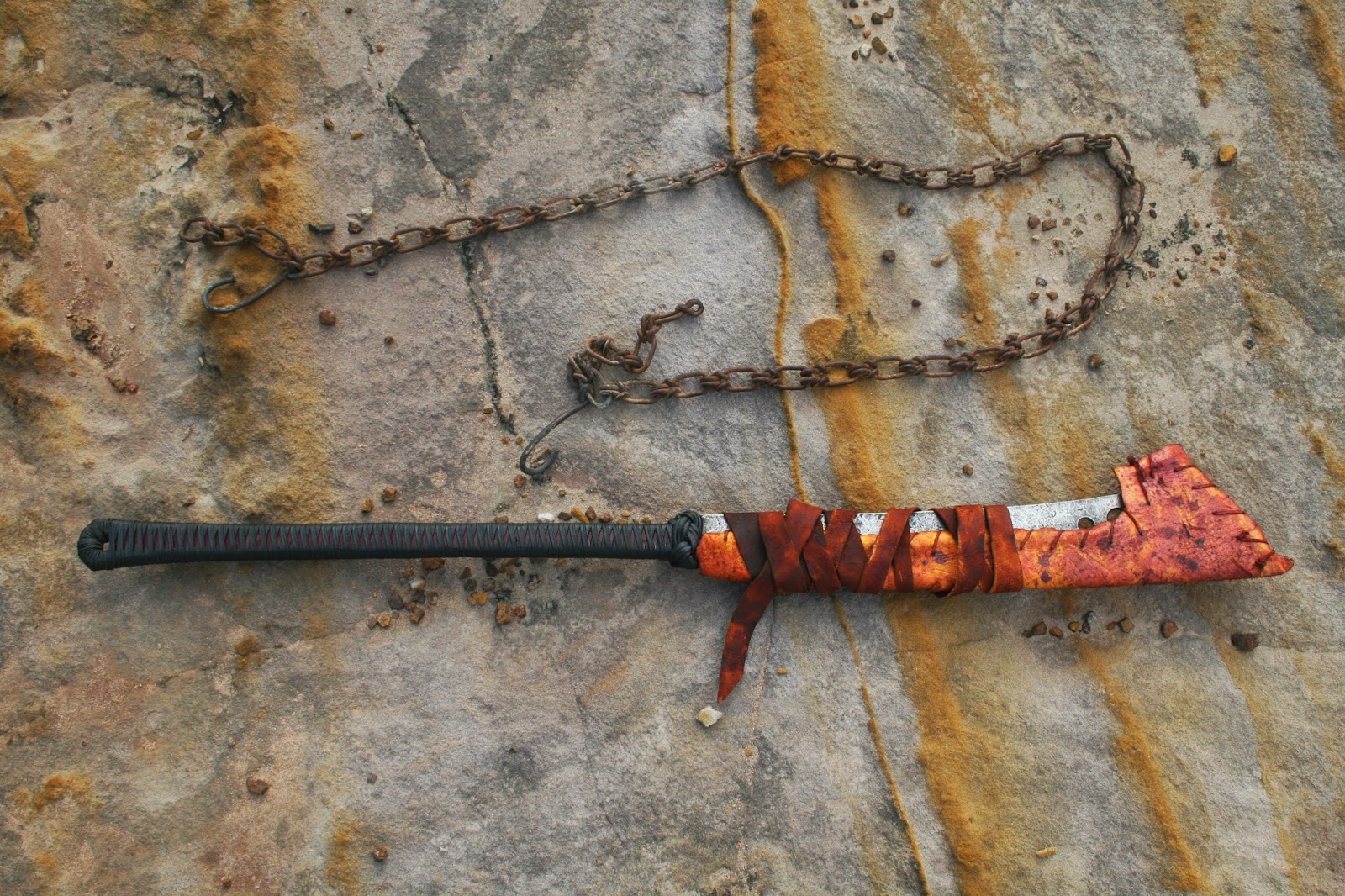 My buddy and fellow knifemaker Tobin Nieto of Stonehaven Knifeworks made the lined rawhide sheath for it.  One of the avenues that led him to making knives was an interest in movie props and replicas of movie props.  He perfectly captured the vibe that I envisioned for the overall project: something that would be carried by a boss character in a zombie video game or the antagonist of a slasher movie.

I had my hand in the sheathwork, though.  Namely, the "blood splatters". 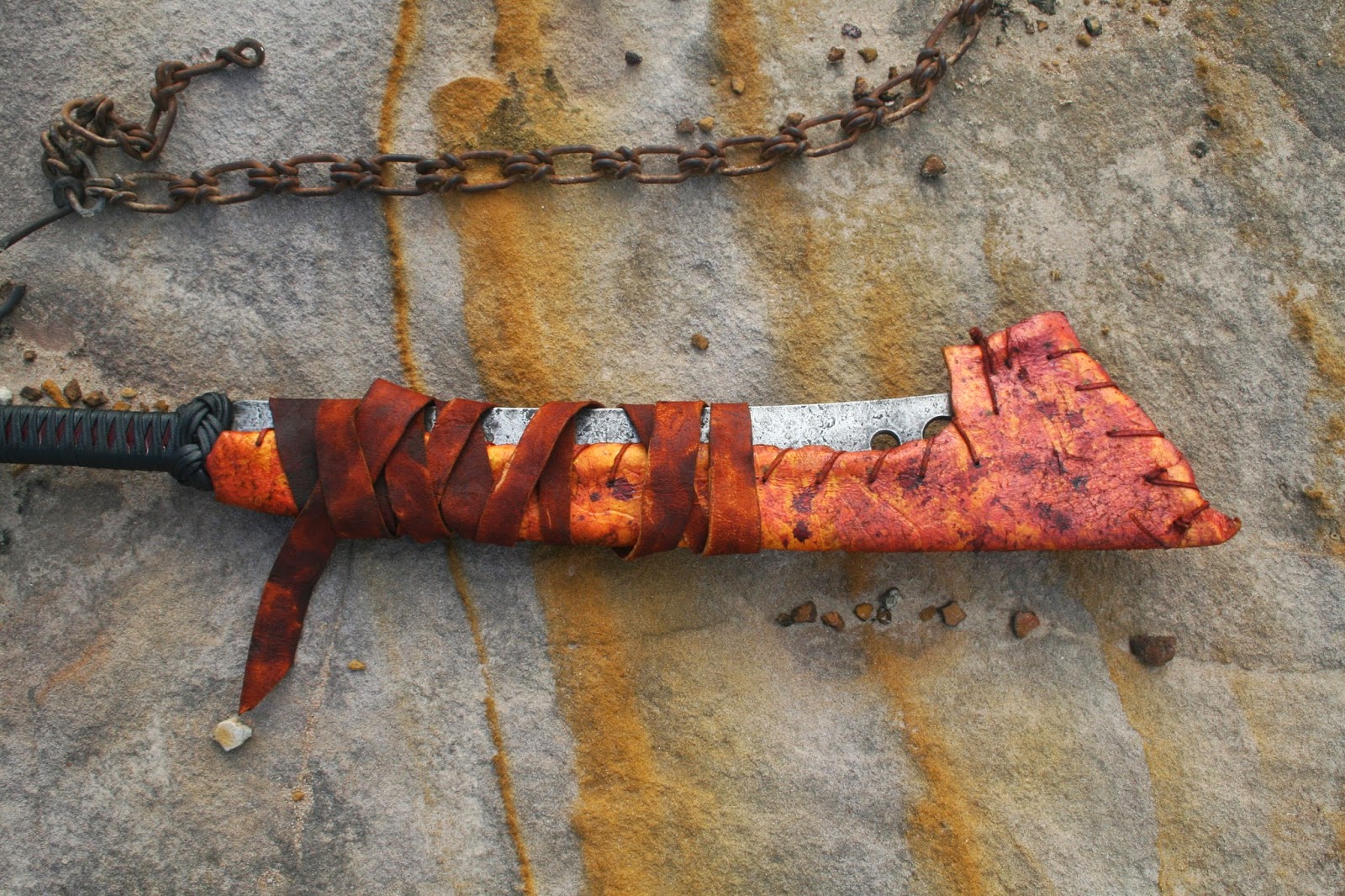 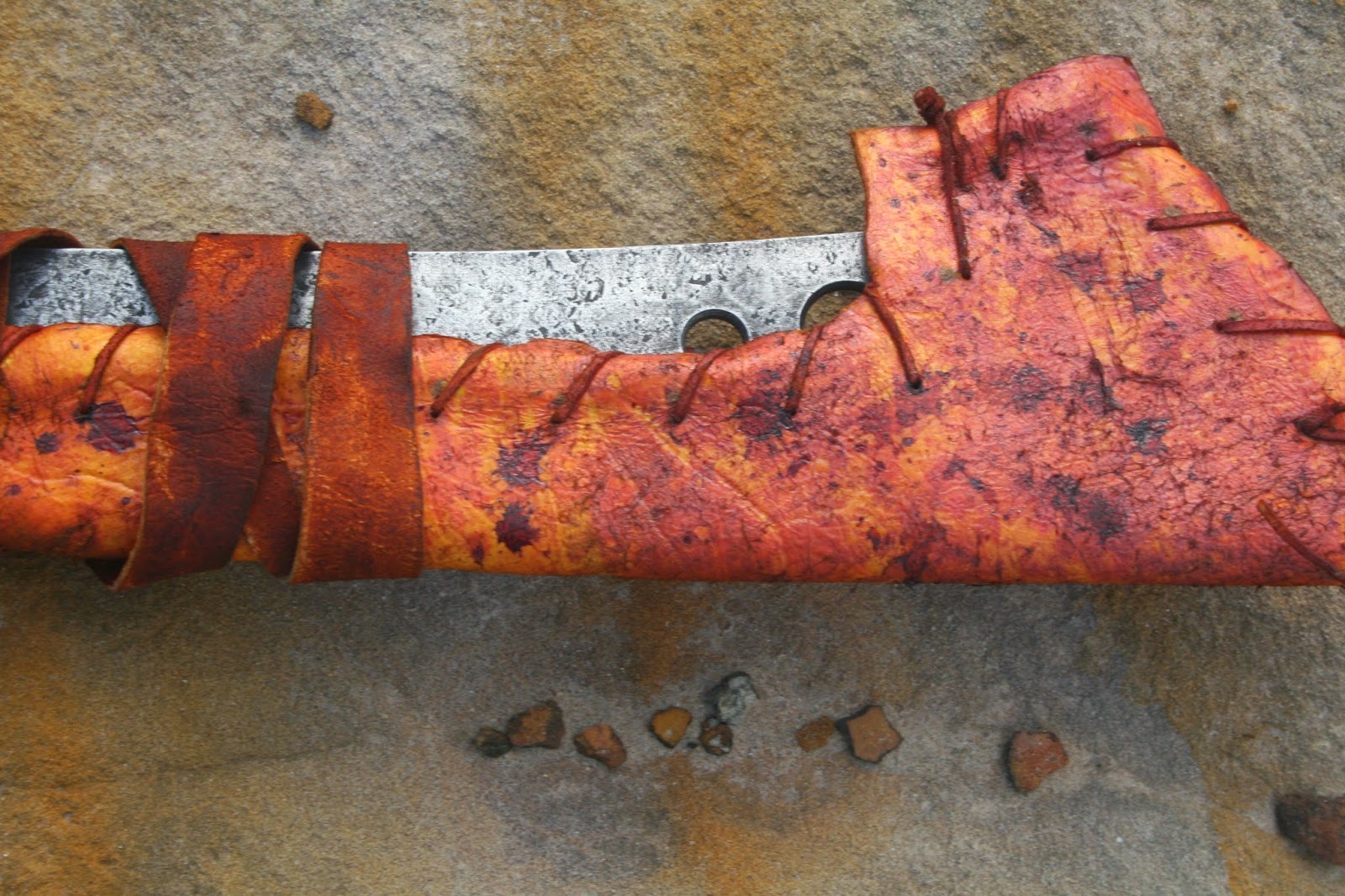 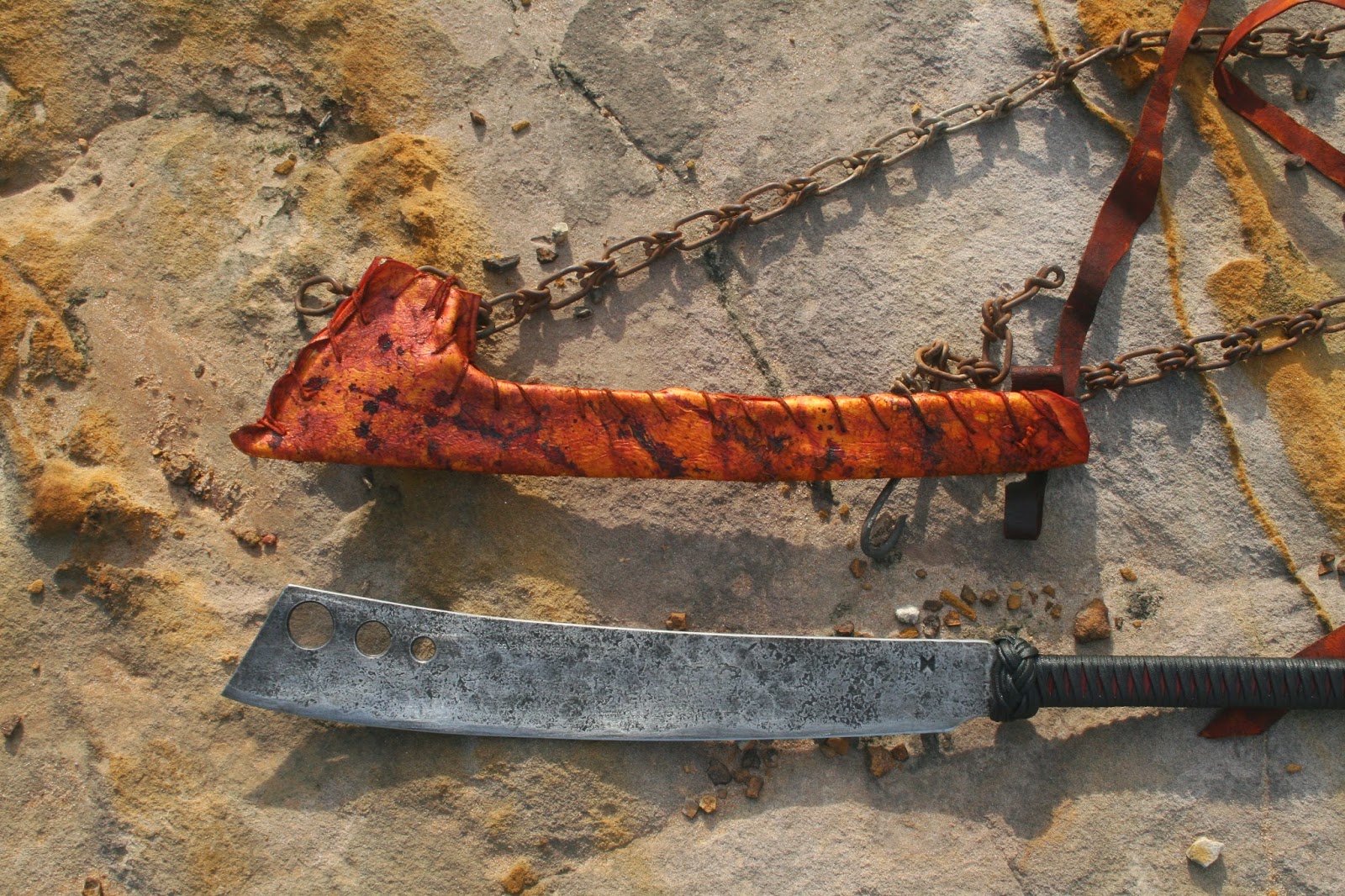 The chain is a shoulder sling.  It originally was part of the mechanism for opening and shutting a heavy door in a huge slaughterhouse that my landlord's father worked in.  I don't know what position he had, but he told me there were 600 men working under him, and he supervised when the slaughterhouse was torn down.  The hooks are forged from a high-carbon farm implement tine. 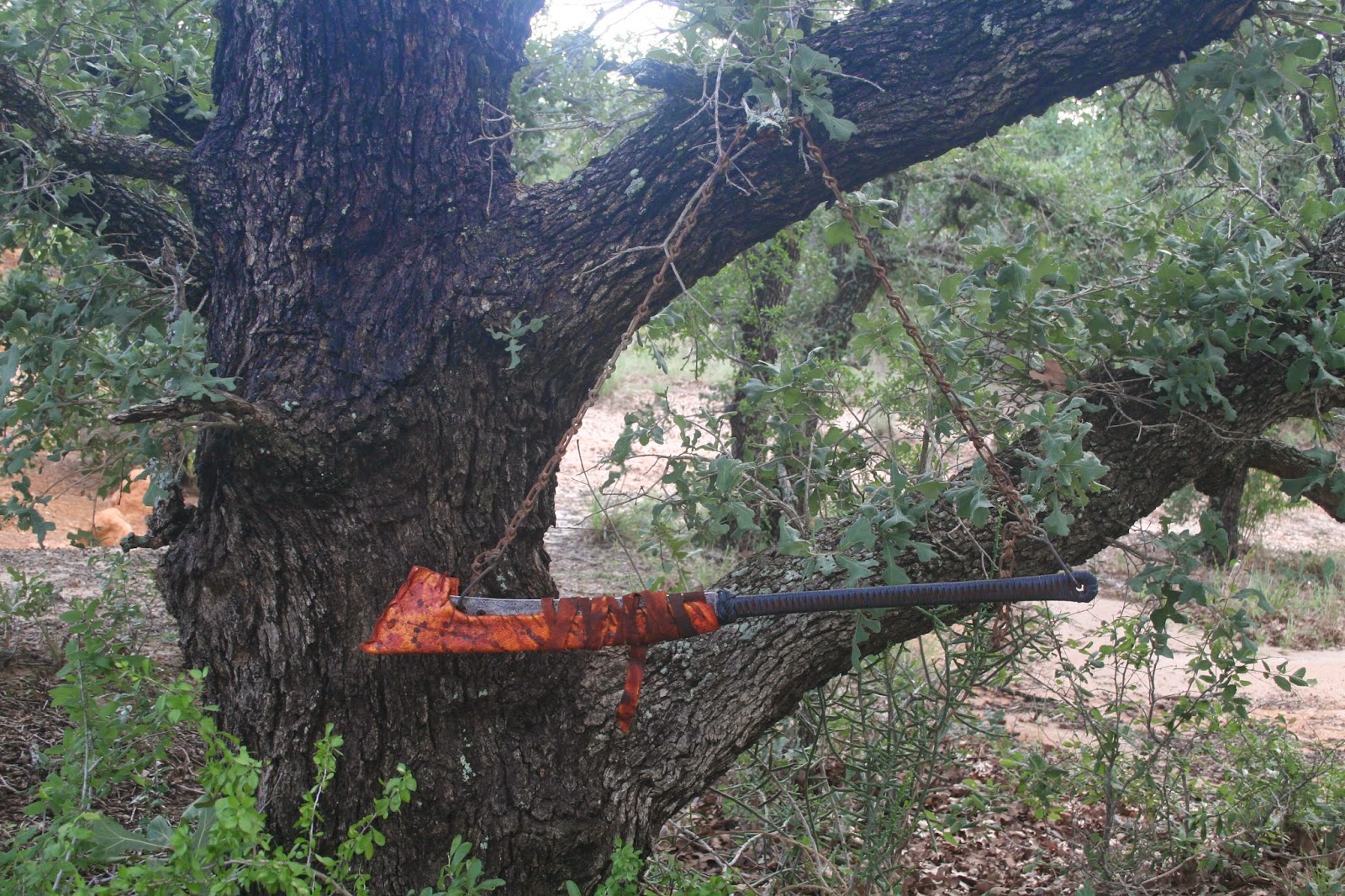 The blood splatters look pretty authentic, huh?  Like something Leatherface would have hanging above his bed.   :D 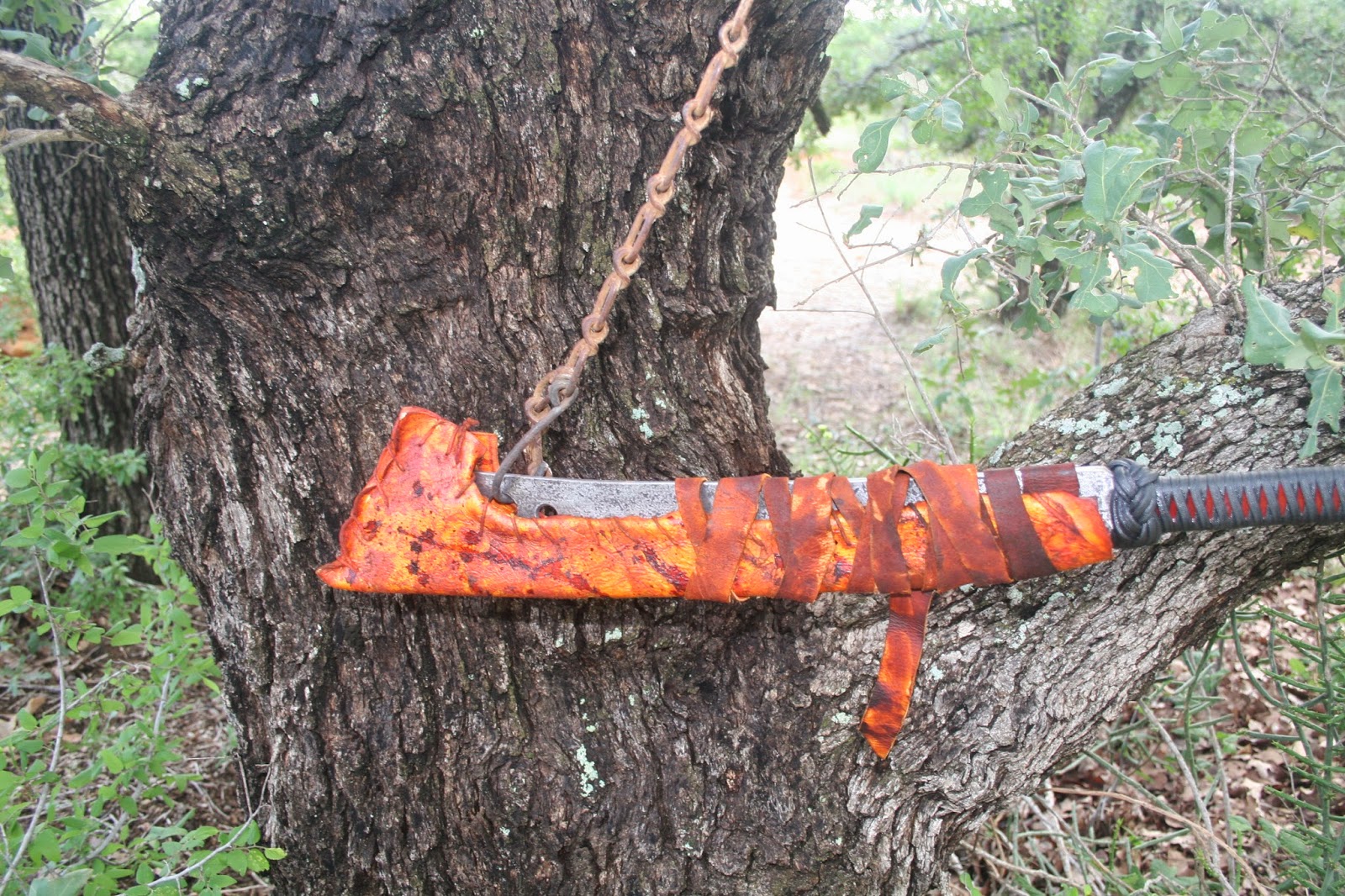 Here's one of the ways of wearing it with the sling. 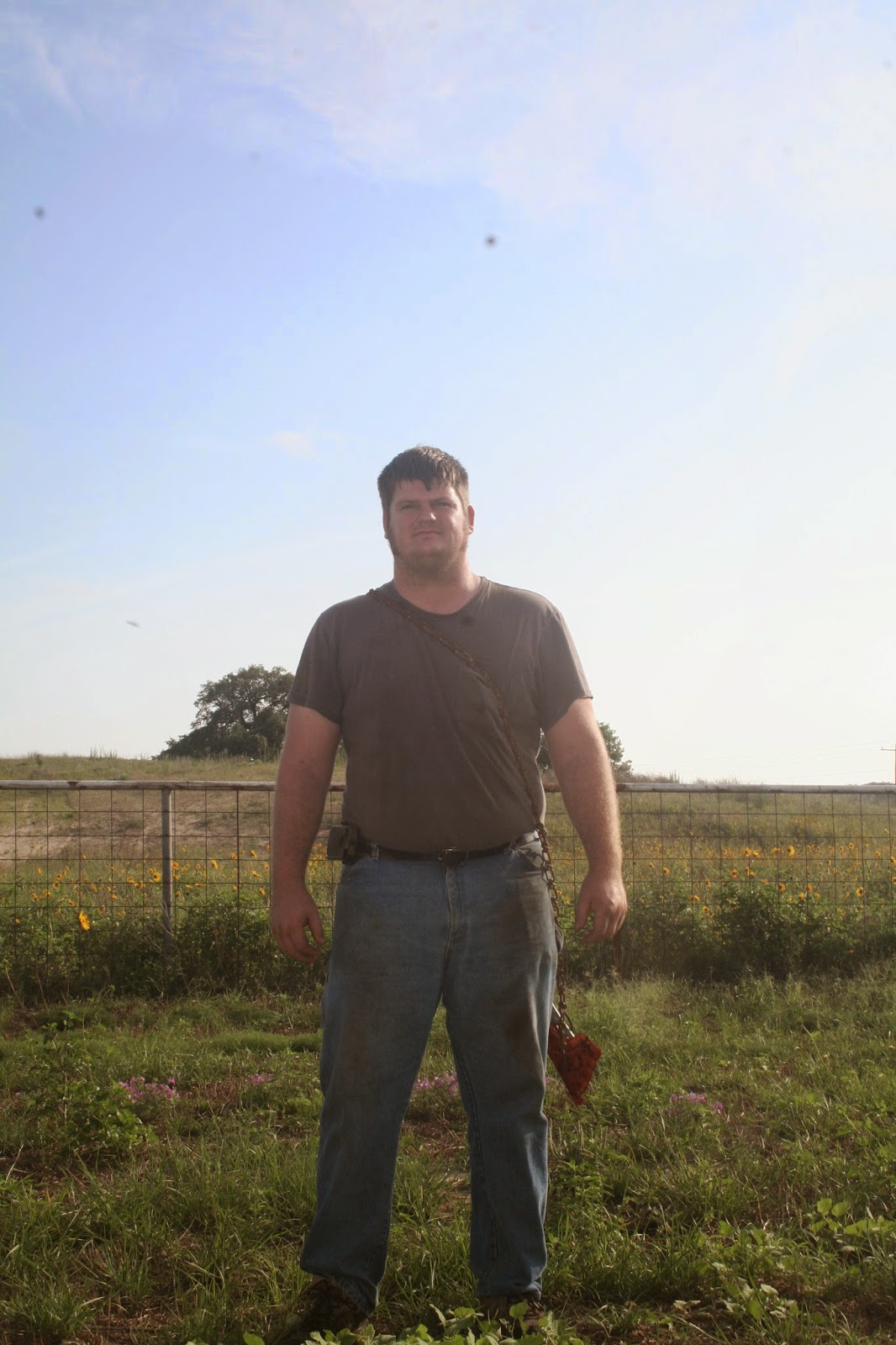 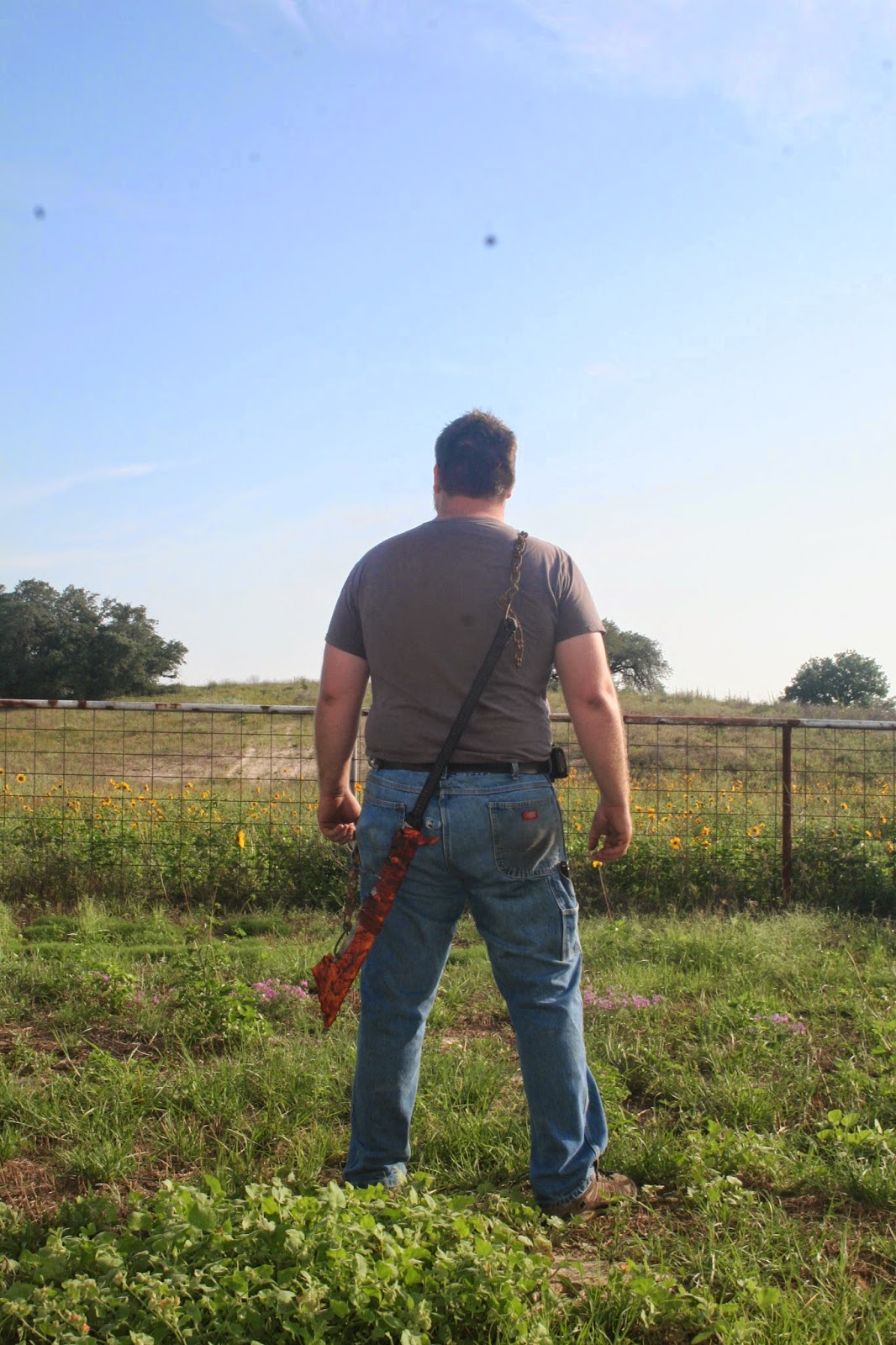 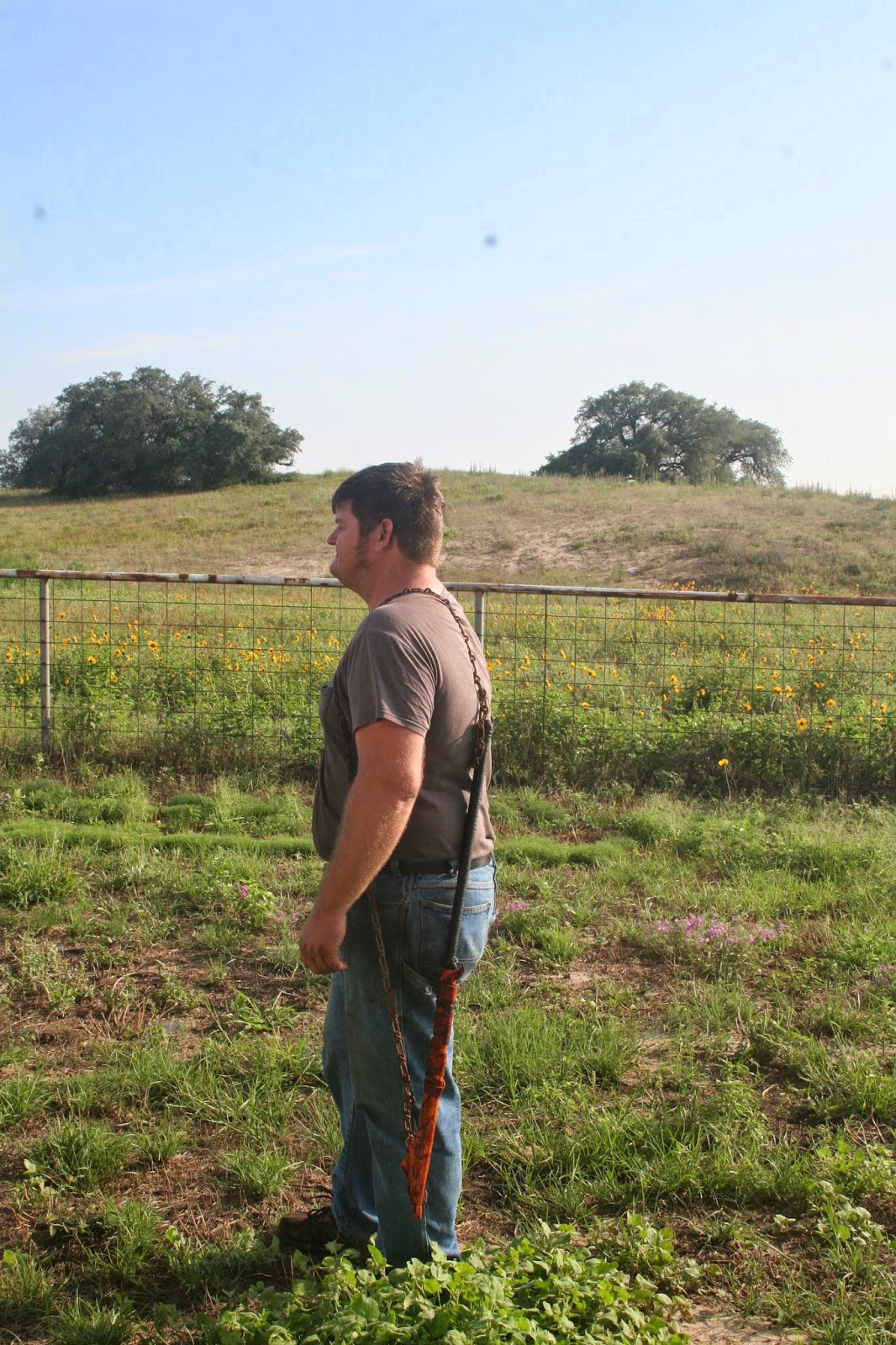 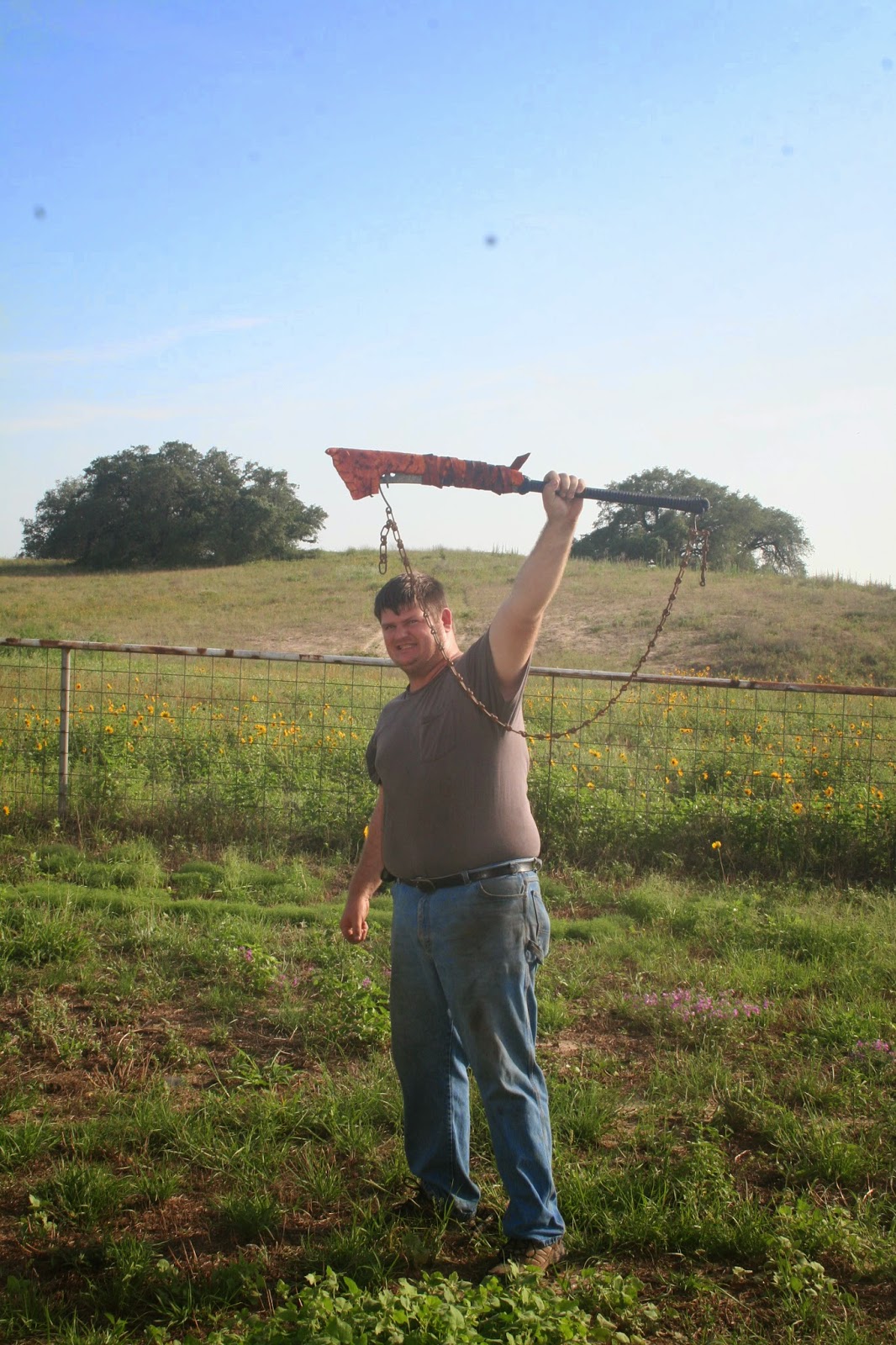 One of the things I like about it is that although it is large and has plenty of power, it's still light and lively enough to wield one-handed. 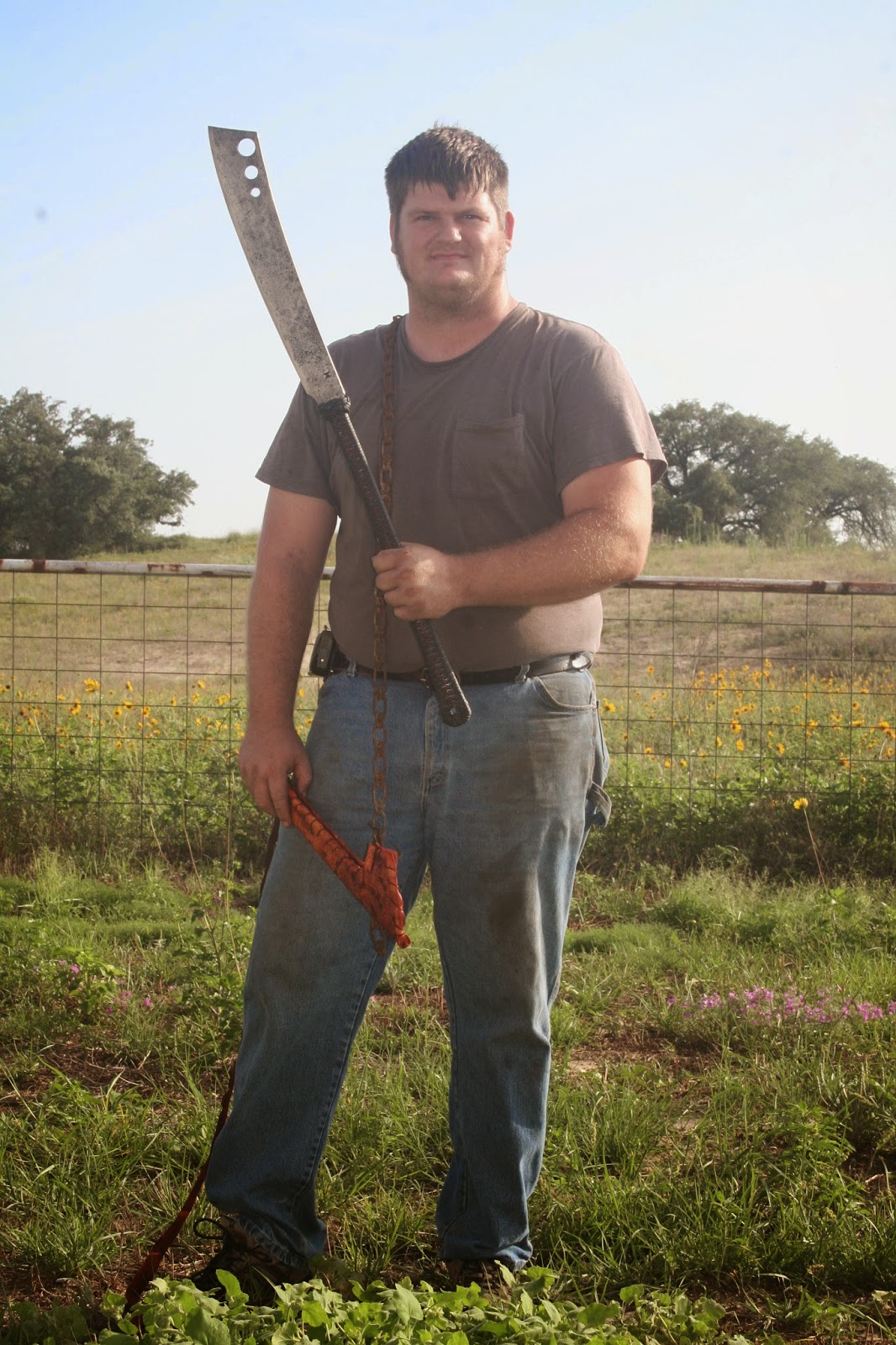 I have some materials gathered for a little cutting demo video later on in the week, weather permitting. 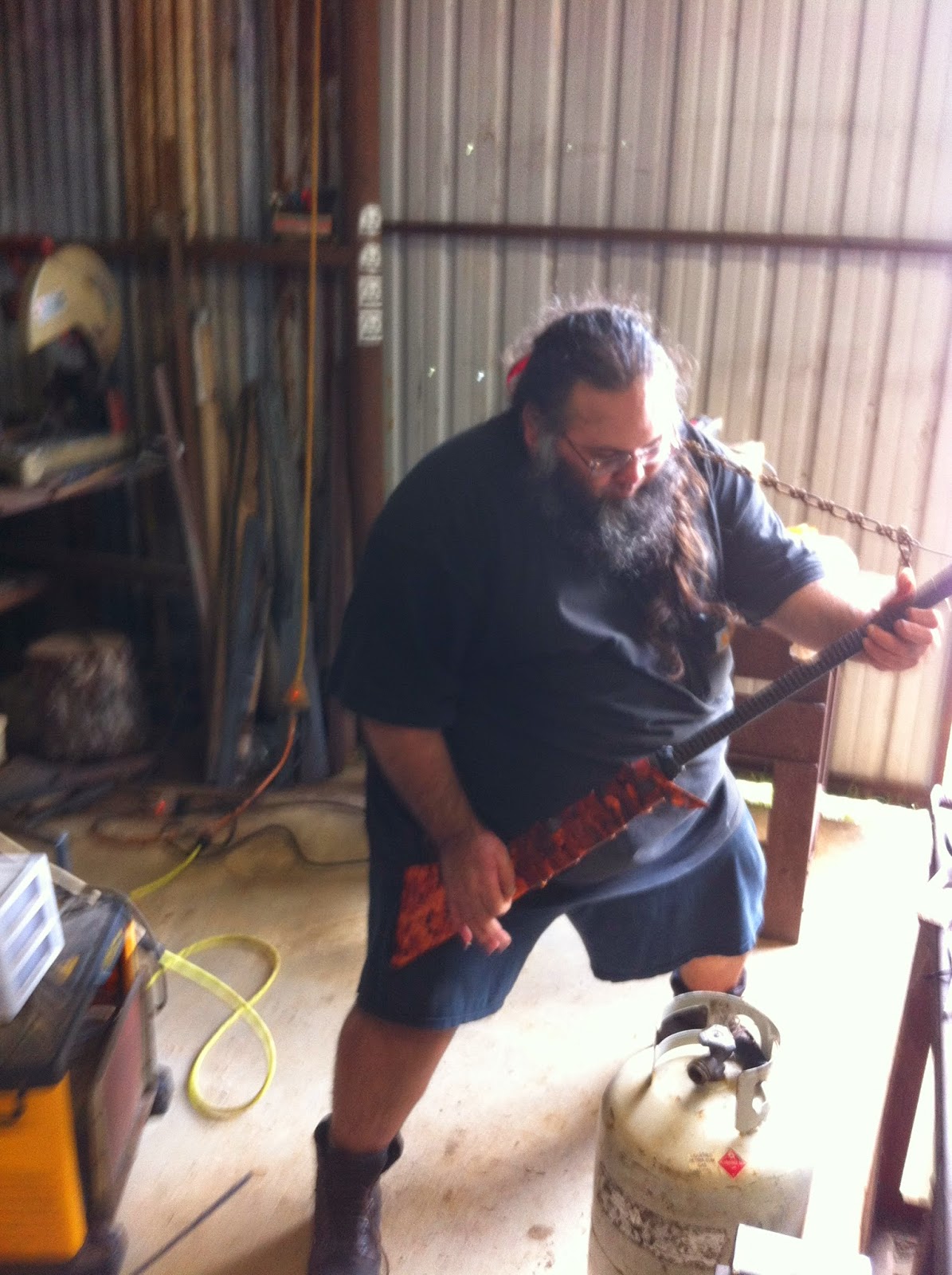 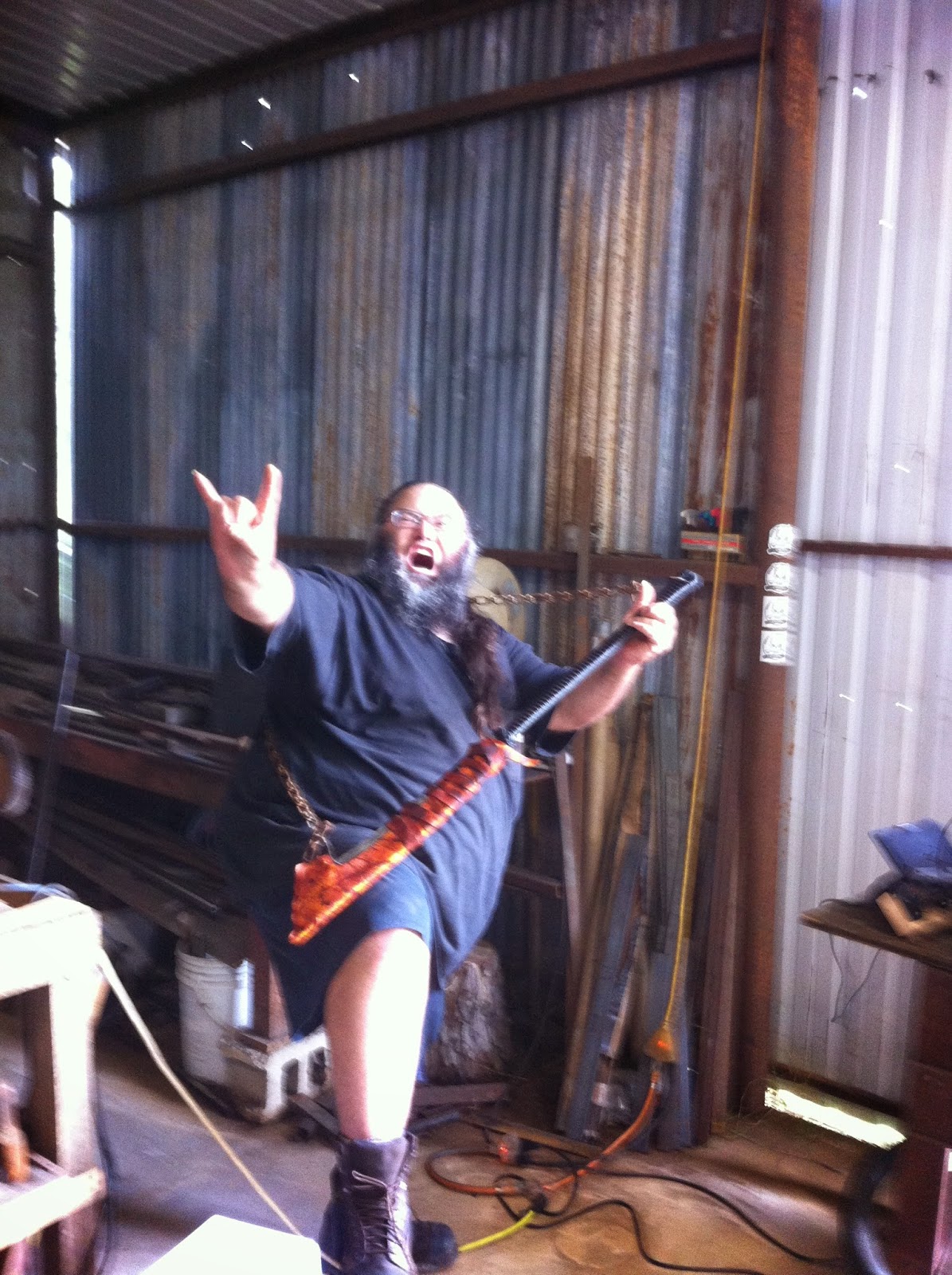 Just dropped this carcass splitter off with my buddy Tobin Nieto to get a rawhide sheath built.  I'll do final cleanup and sharpening when I get it back. 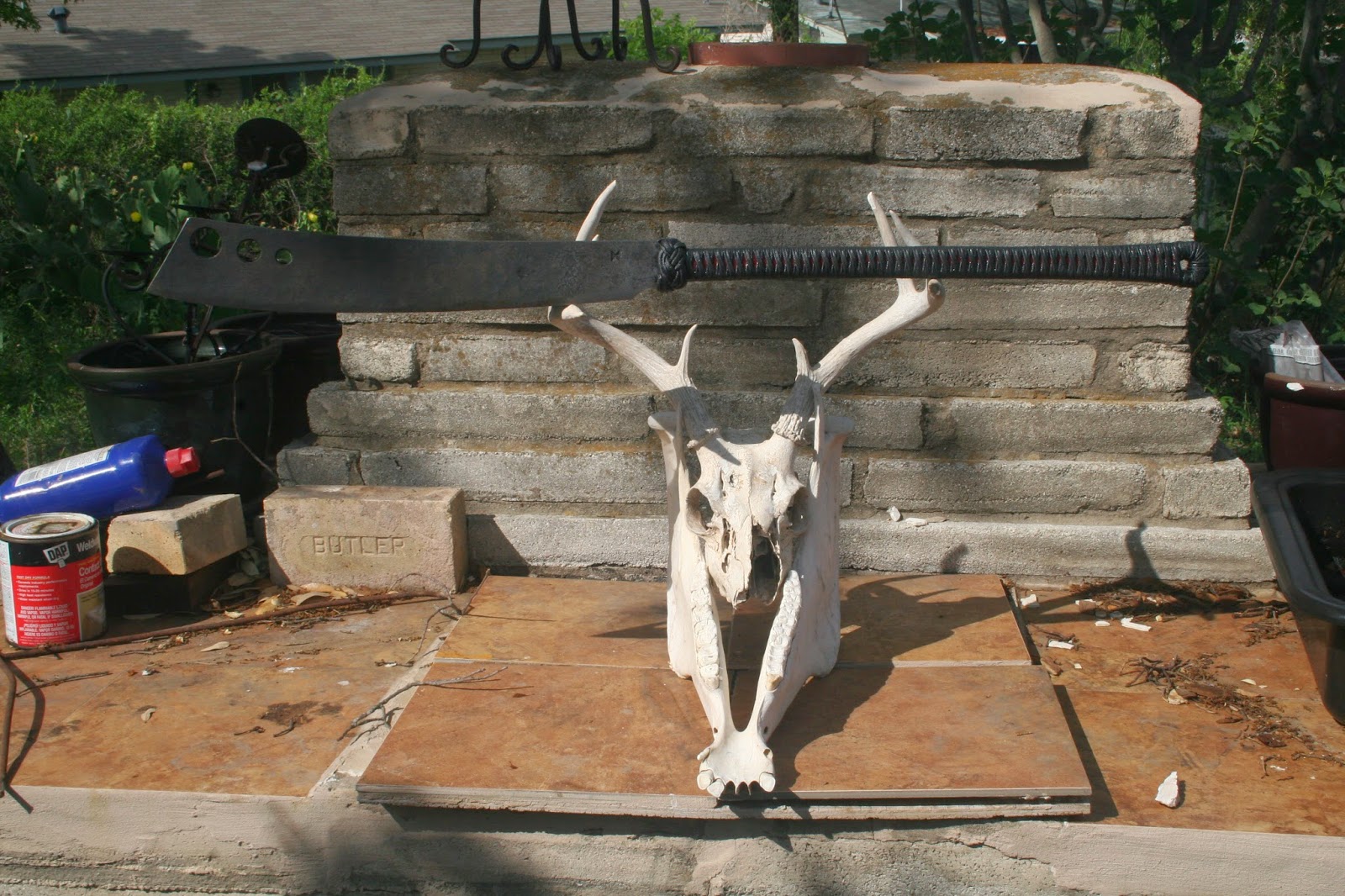 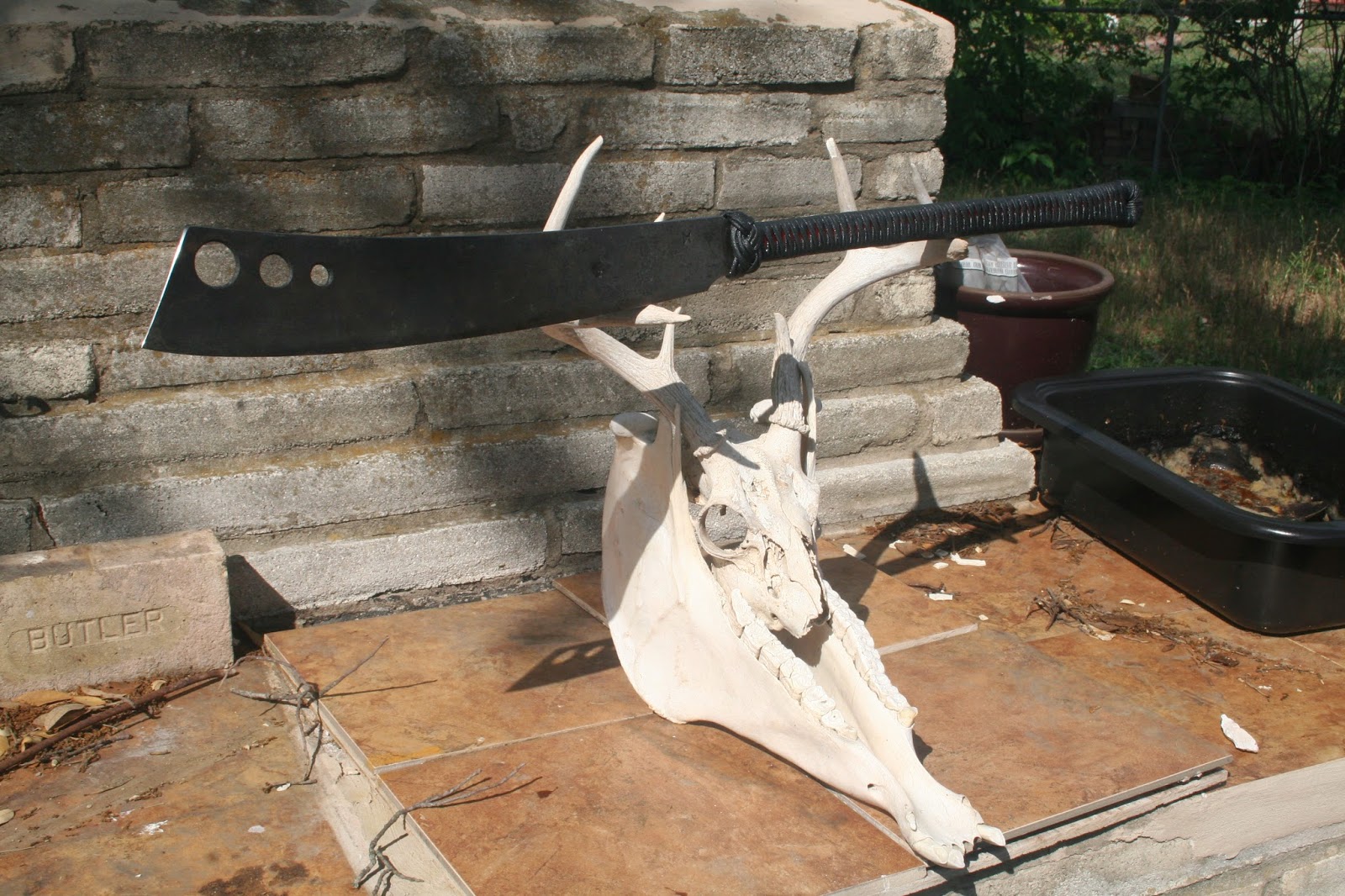 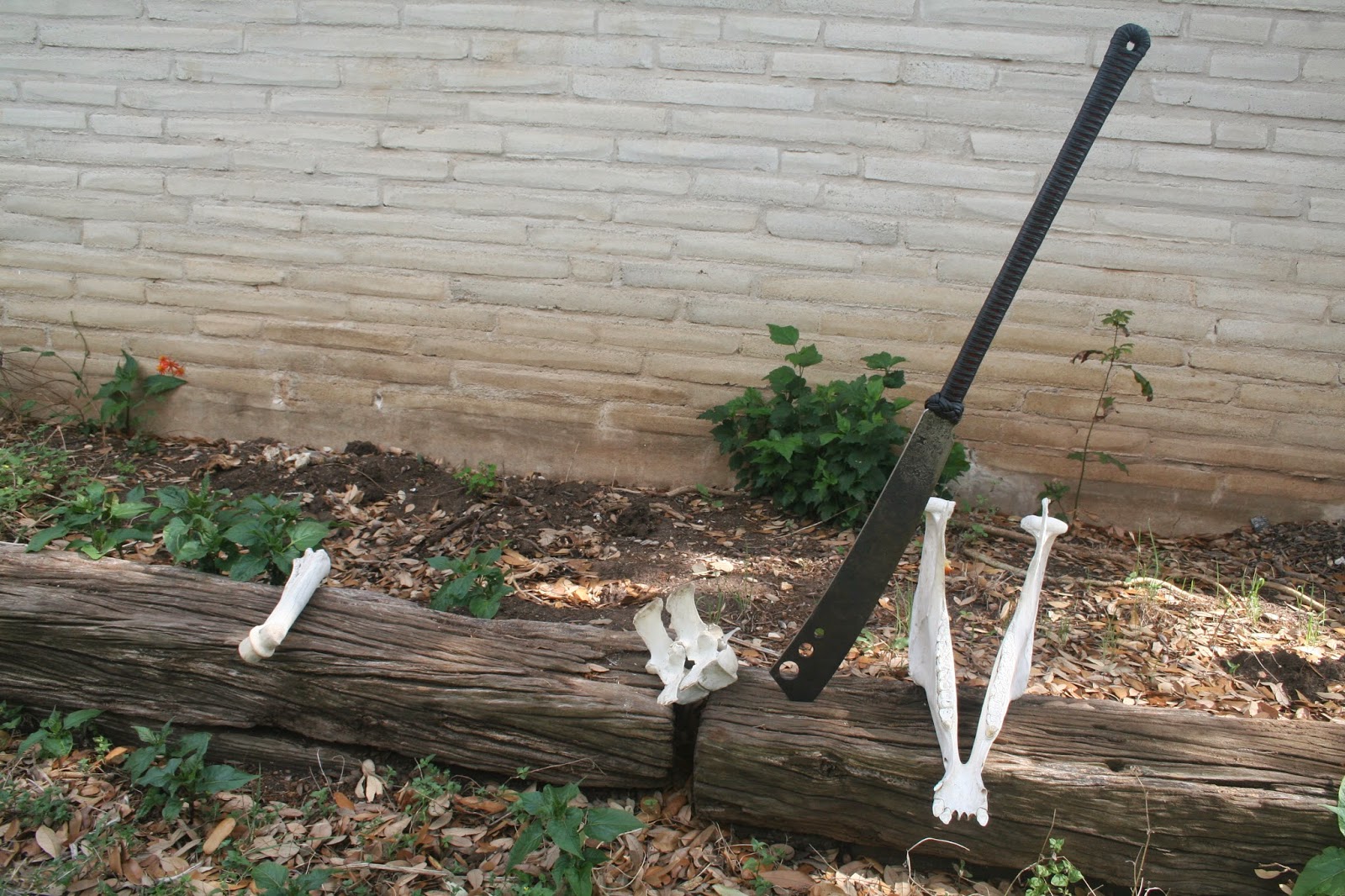 It'll be on my table at the Blade Show.  More details when it's finished.

I can't help but get this maniacal grin when I pick it up.  :D 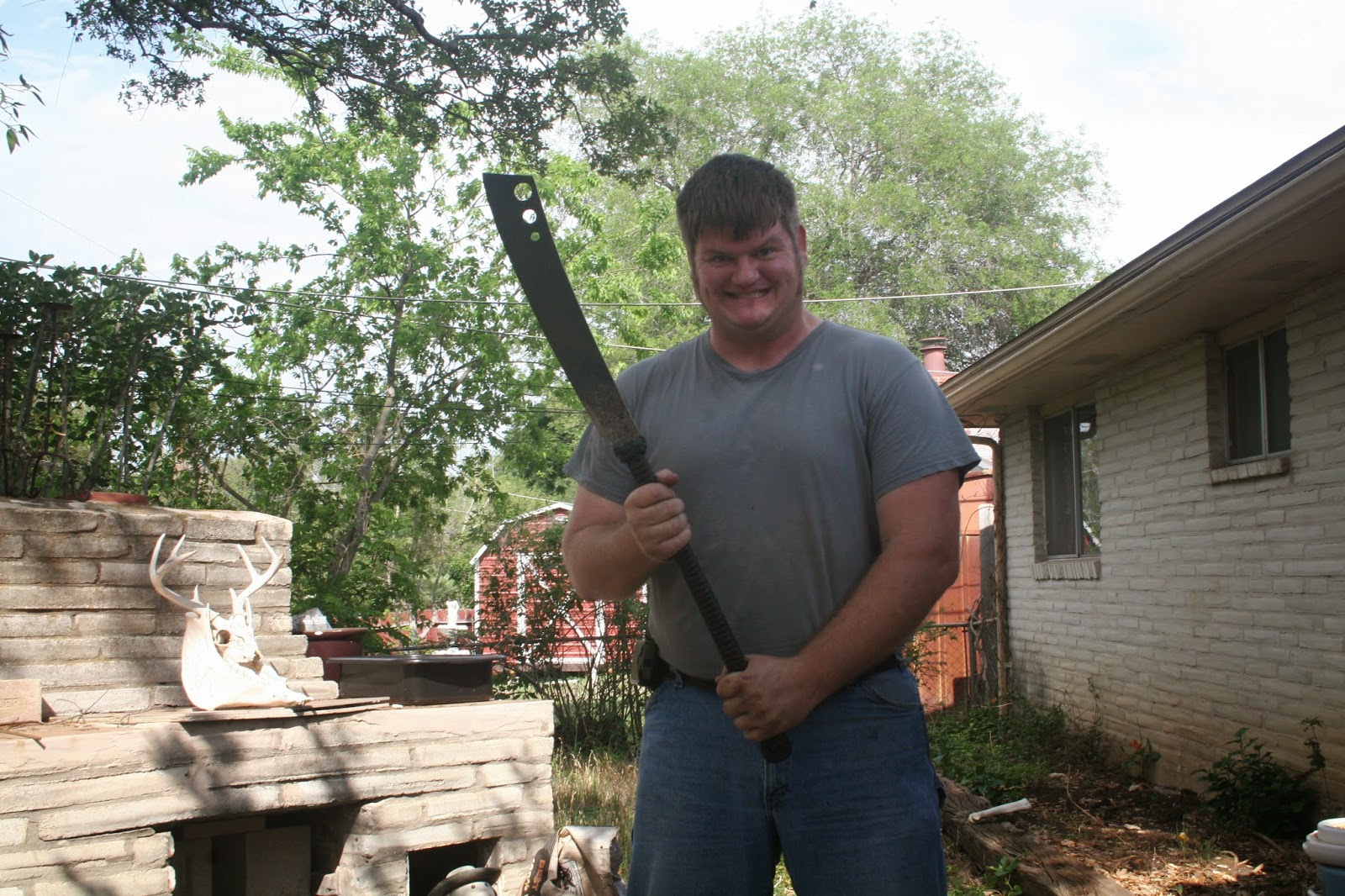 Getting ready for the Blade Show...

I haven't been posting much, but it's been because I'm working to get inventory ready for the Blade Show in Atlanta June 6-8.  I'll be posting pictures of my work later on.  The Aggression with the ostrich leg inlaid sheath will be on my table, as well as some other interesting pieces.  :D

Also, this means that I'm being slower than usual about answering e-mails.  Bear with me; gotta sleep some time!


Posted by Helm Enterprises, Forging Division at 10:02 PM No comments:

The latest addition to my Aggression family of large, double-edged, aggressive knives is interesting to me in how I can see the evolution and refinement of the basic idea and in the execution.  It has a forged 5160 blade 12" long that is fully sharpened on the top edge for about 2/3 of the length and a gentle recurve to the profile.  The handle is a curved coffin outline wrapped in epoxy-impregnated retina-searing neon orange paracord with a black overlay and three-strand Turk's head knot, the butt end of the tang left exposed. 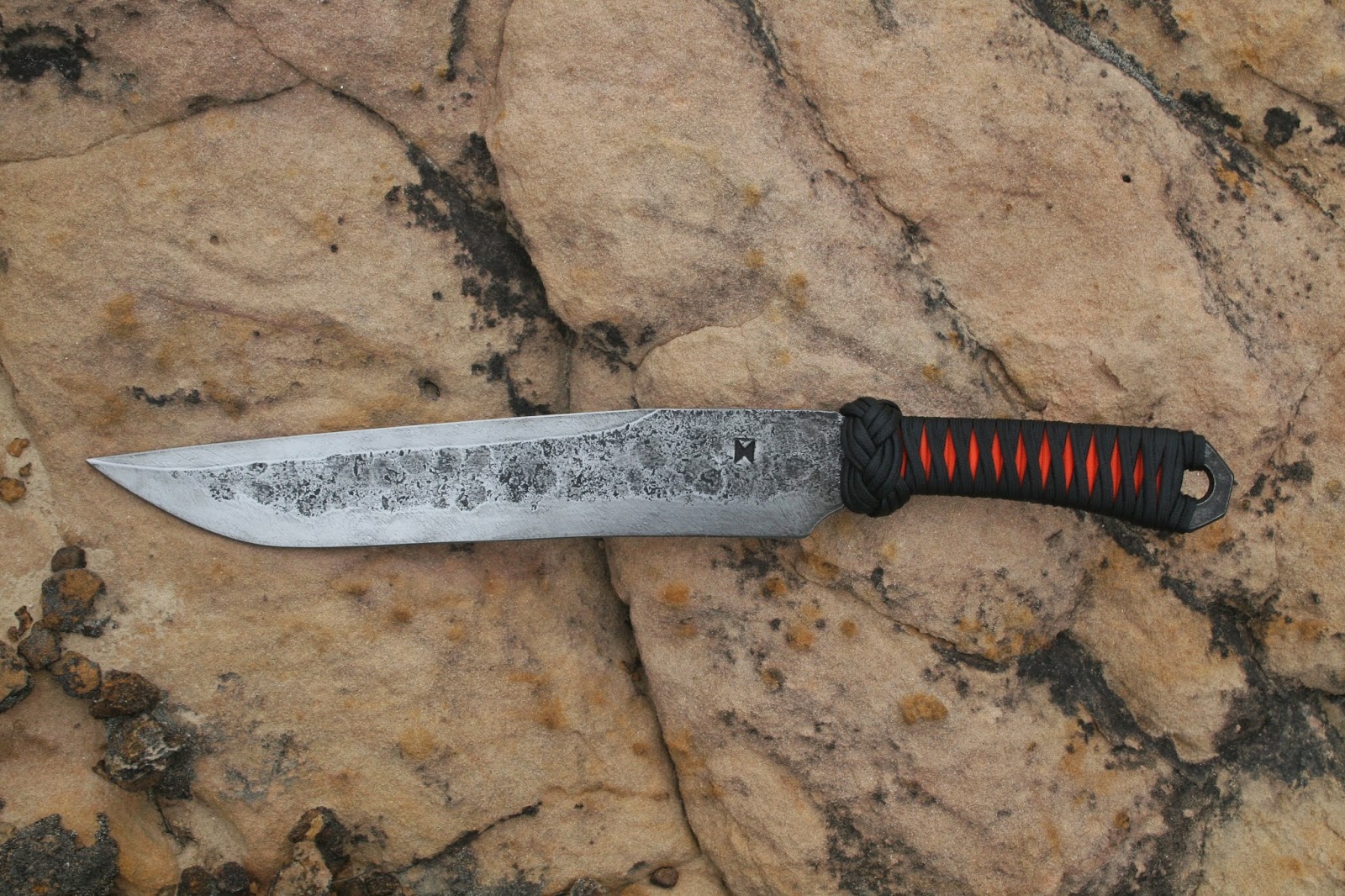 And it comes with a Luke Swenson sheath featuring a dinosaur hide inlay.  Or ostrich leg.  They look much the same.  :D 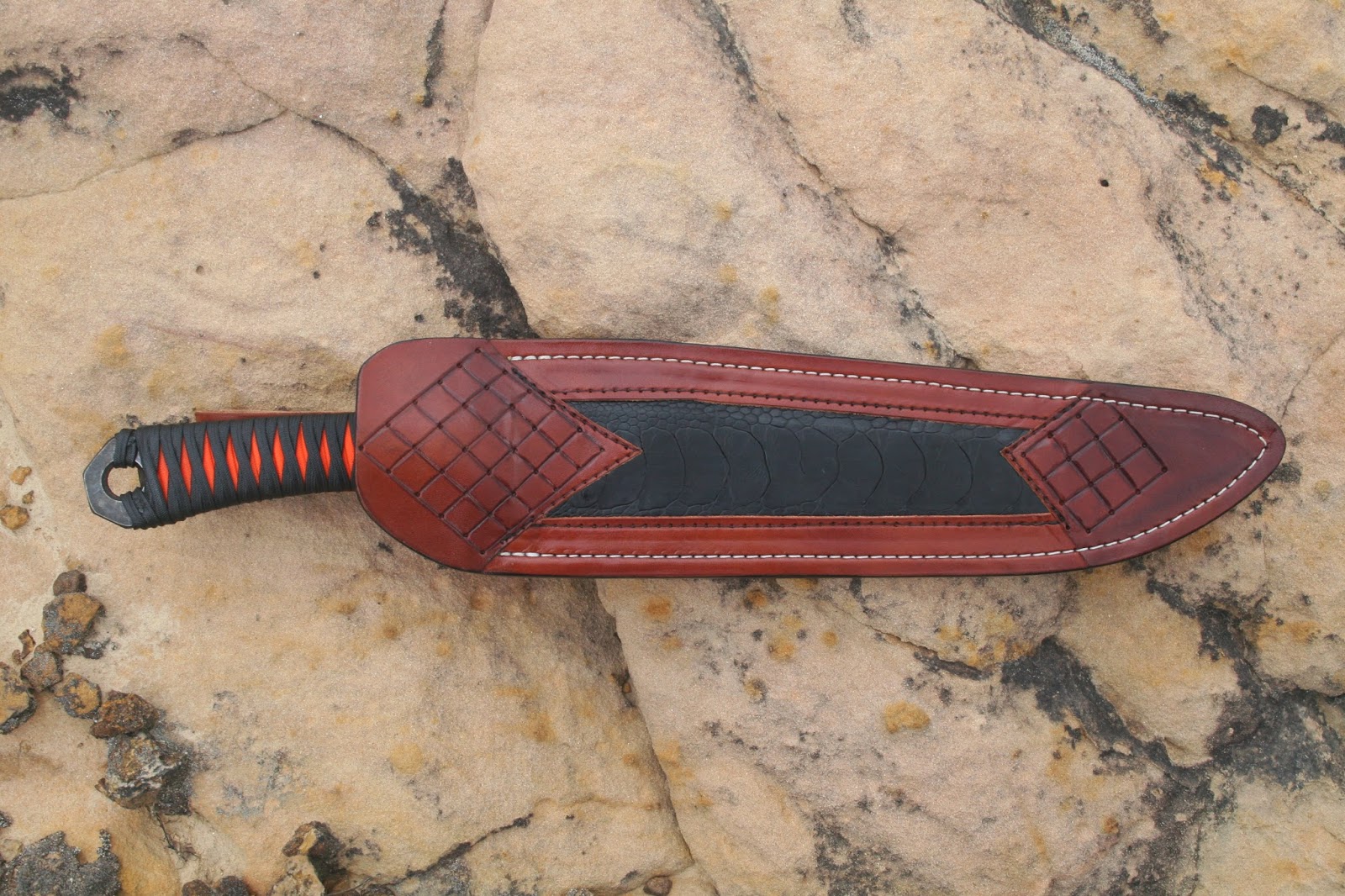 The sheath has an adjustable-height belt loop. 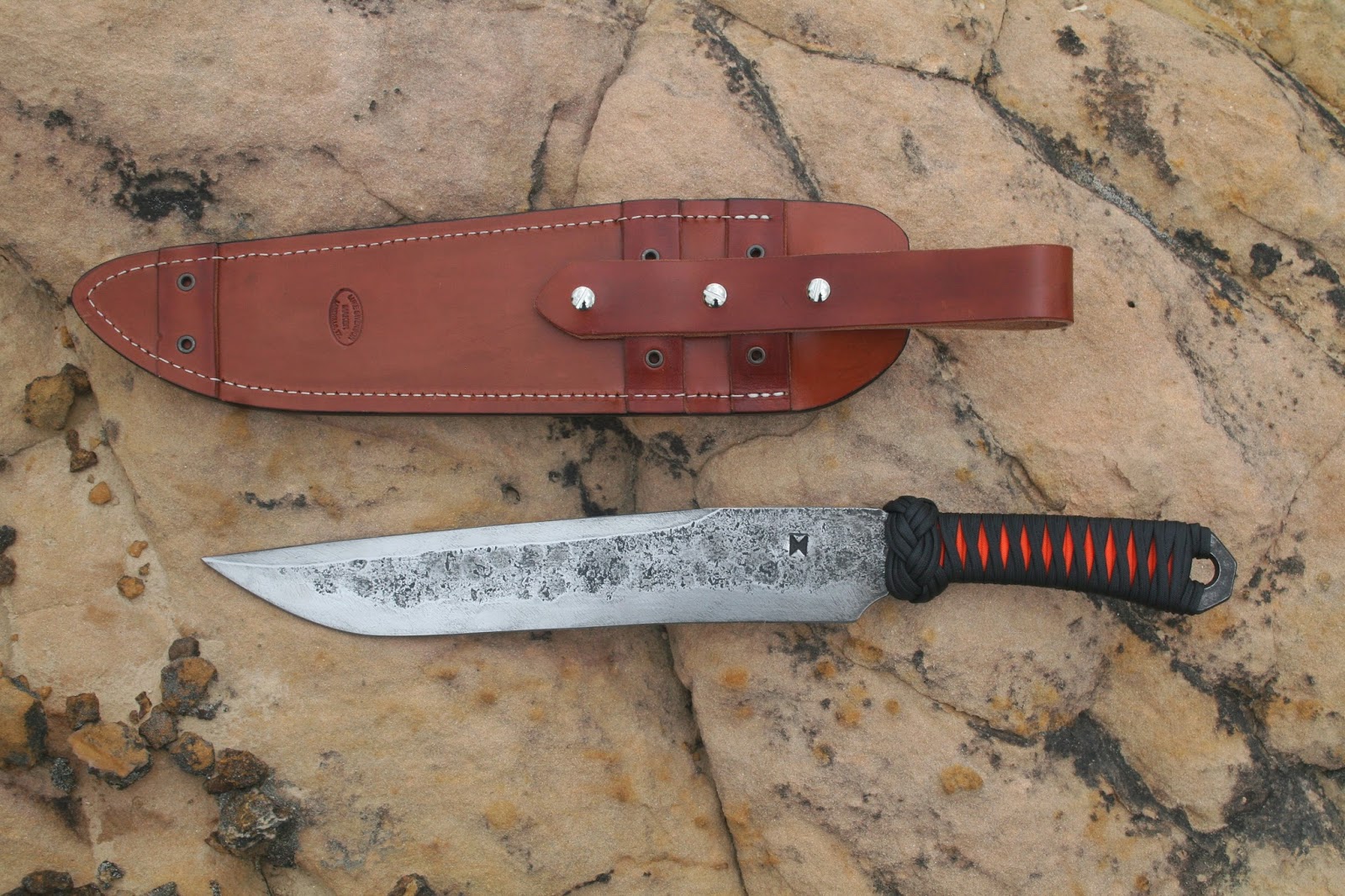 And to give a sense of scale, a couple of shots of it in hand. 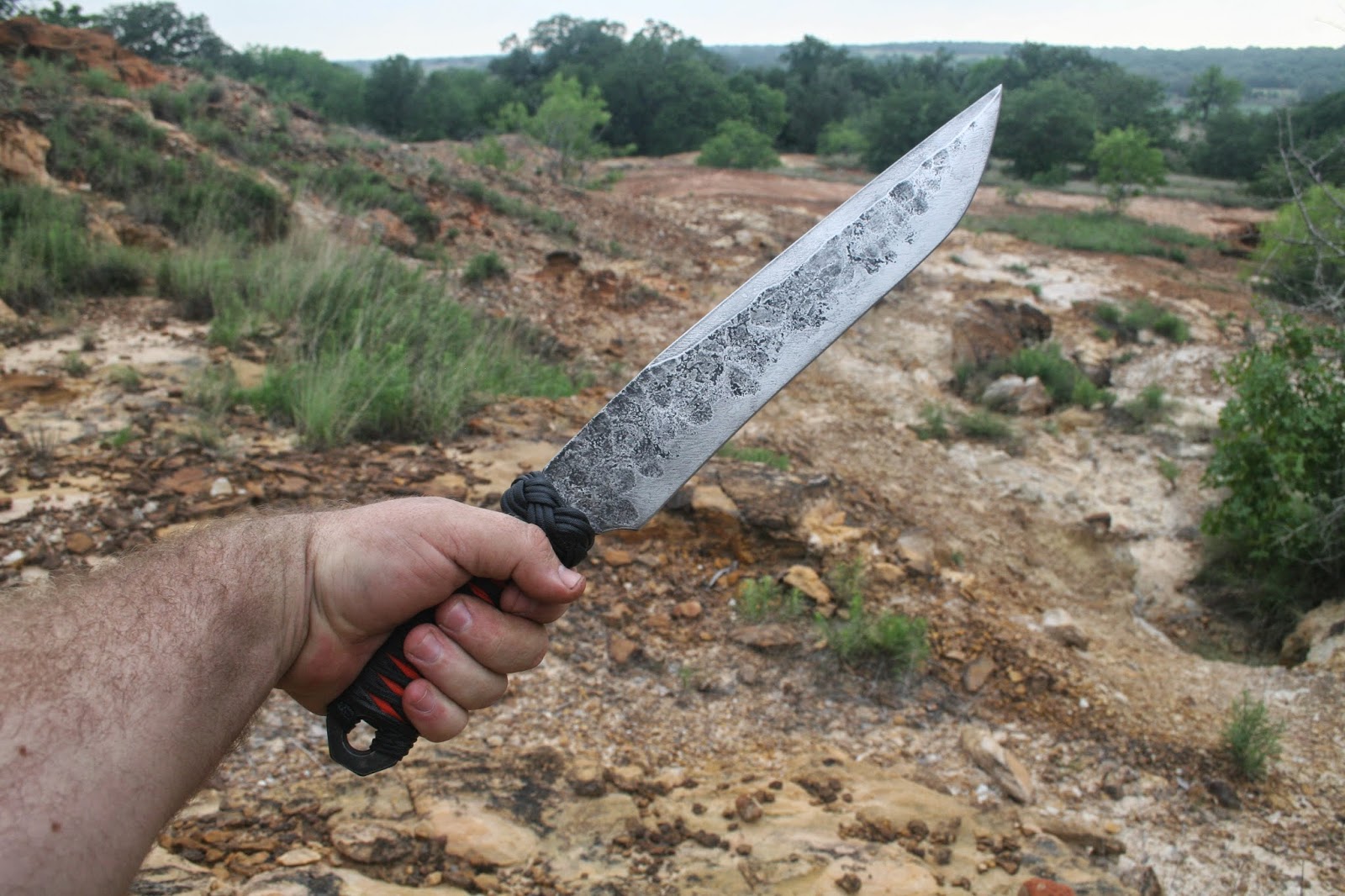 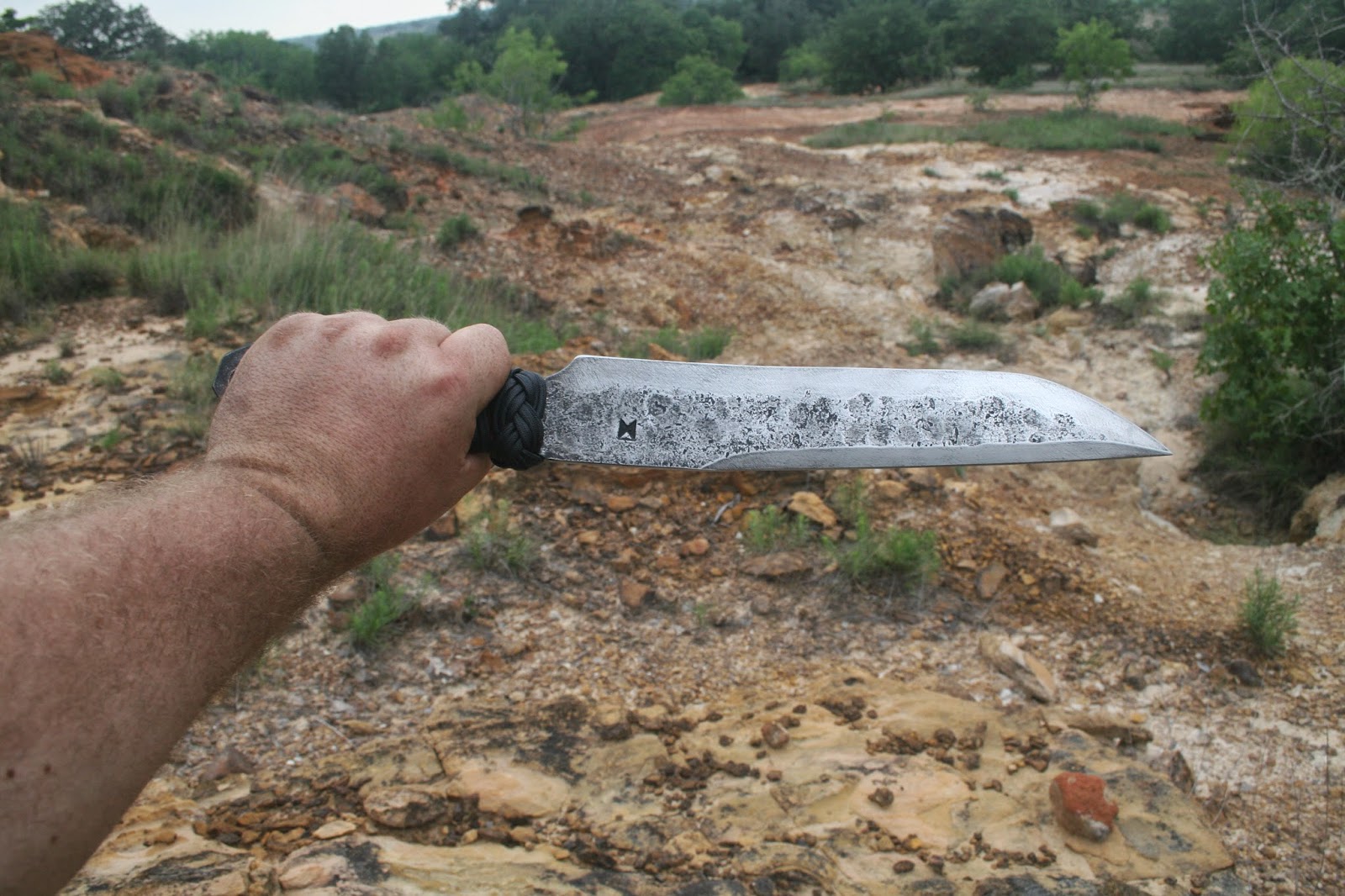 It has the same overall length as one of my 18" tomahawks. I think this would look great on a T-shirt.  :) 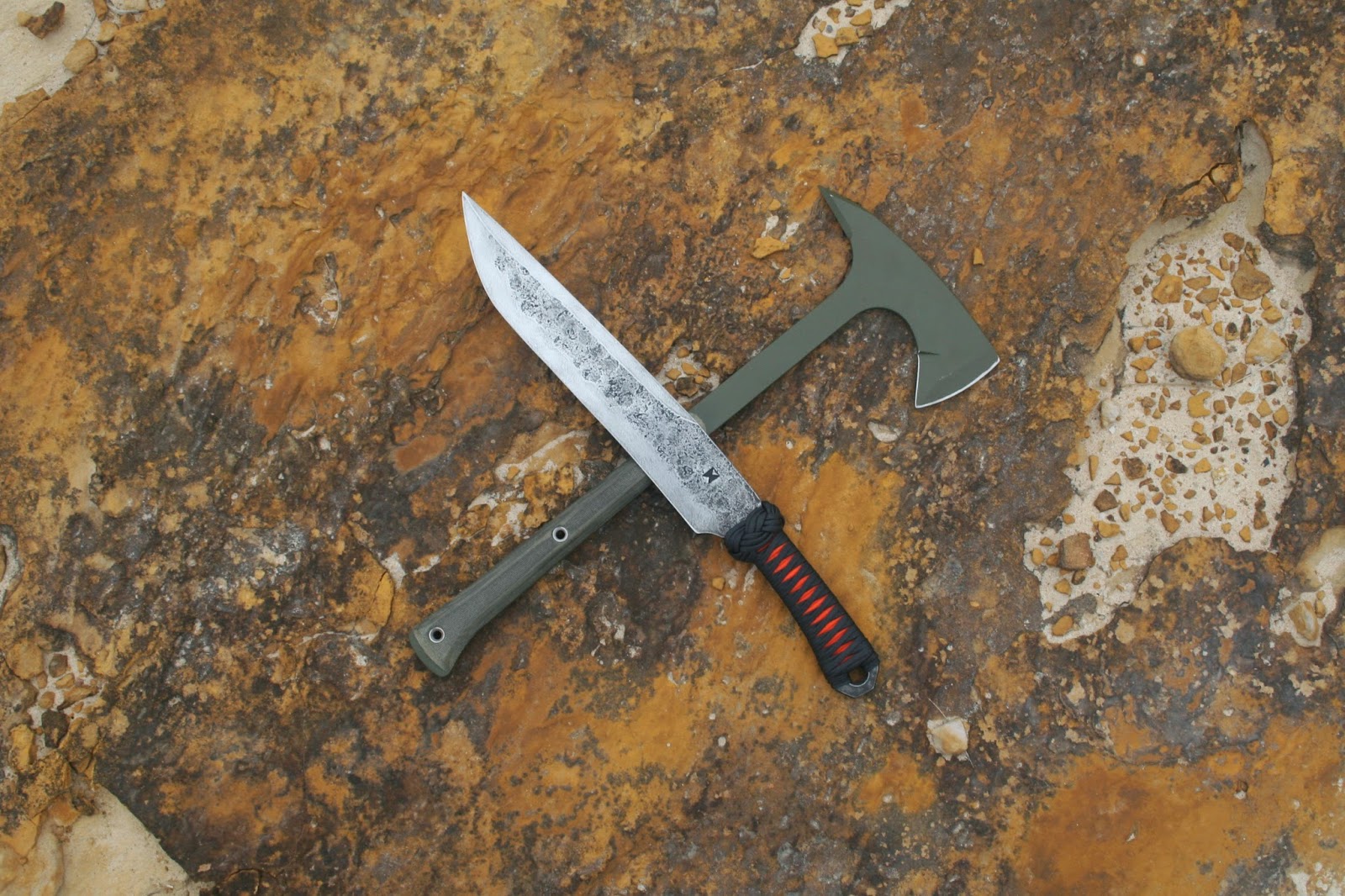 Things are about to get busier...

... on the Grinding Division side of things. 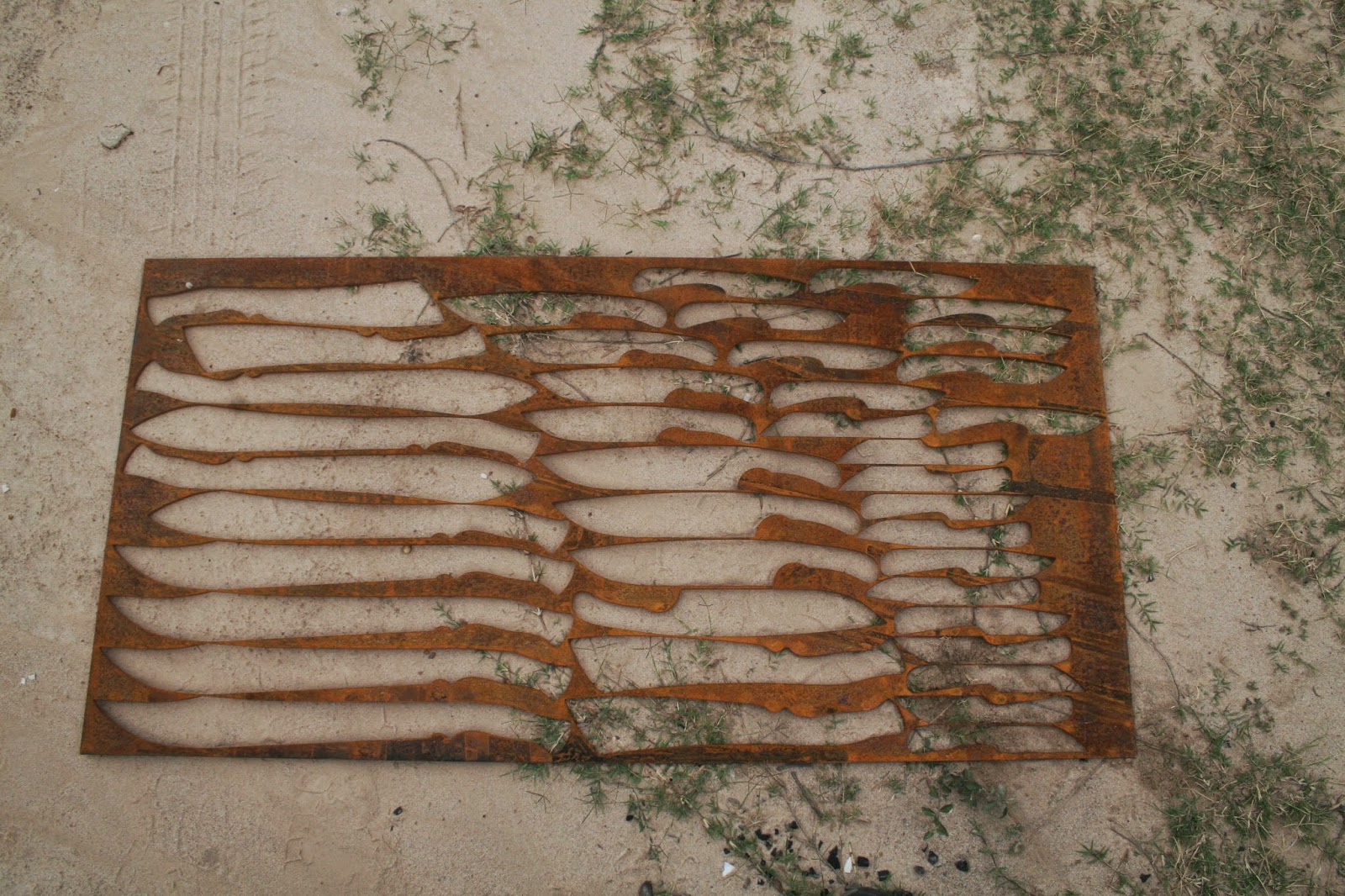 You might say I have my work cut out for me.  :D
Posted by Helm Enterprises, Forging Division at 11:10 AM 3 comments: