I made some texturing tools for my home-brewed hammer this week, and used them to help provide some samples to an architect for a potential upcoming job.

The first tool was made from a dome-headed bolt used to hold sections of railroad track together. I found it mostly buried in the dirt near the tracks that run by my shop, heavily corroded and pitted by rust. I cut the head off, welded it to the end of a length of thin mild steel strap, bent the strap to make a spring, and had my tool: 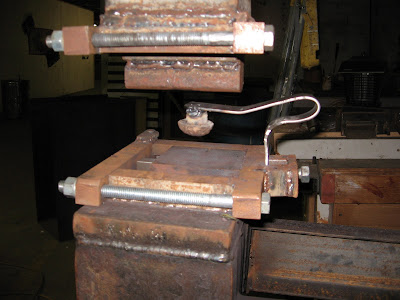 It fits into the auxilliary tool holder on my hammer's quick-change die holder. The bottom die is just a scrap piece of 1" plate, which rests even with the top of my die holder. I need to make an actual completely flat bottom, but mostly just to make it fit in the holder better since this scrap is a bit smaller than the holder. Works really well for using tools, upsetting, etc.

Then I used the tool to make another tool. I took a couple of scrap pieces of 1"x3" mild steel bar, welded on rebar handles, got them hot, and passed them under the bolt head tool, and now had the texture transferred to the flat bar. 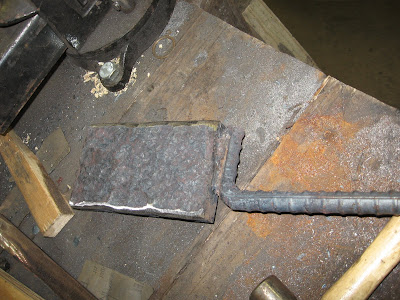 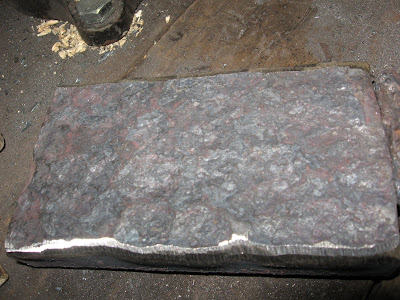 After rounding the edges off, I welded these two onto a piece of wide, thin strap, bent it into a U, welded on a shank to fit the auxilliary tool holder, and had a spring texturing swage. When I have my main flat dies completed, which have tool-holding holes drilled in them (don't know if there is a name for that system of holding tooling on), I'll cut them off of the spring and turn them into die-cap tools. As is, it does a very nice job on 1" round. 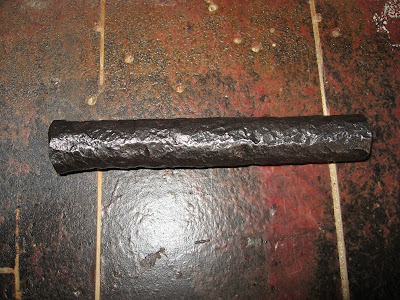 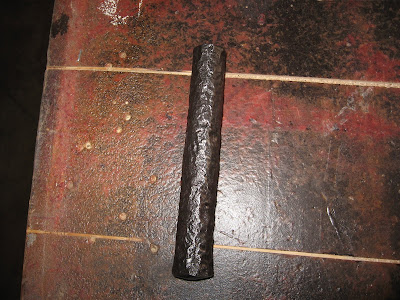 I love this texture!

I also used the bolt head tool to texture some 1/4" plate before cutting out topographic shapes and plug welding them together. The plate began to cup upwards under the hammer, so I flattened it back out with my press after texturing. 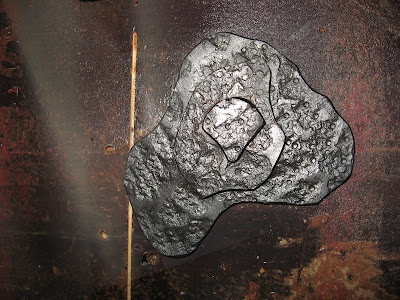 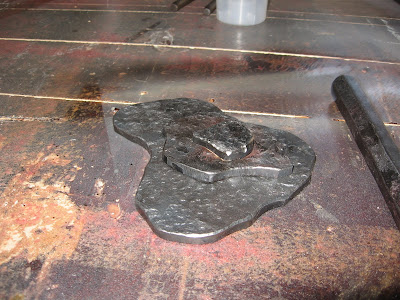 I see the bolt already starting to flatten out some, so I think my next step will be to use it to make a die out of some truck axle that I can harden and use to make new texturing dies as needed.

The samples as delivered to the architect yesterday: 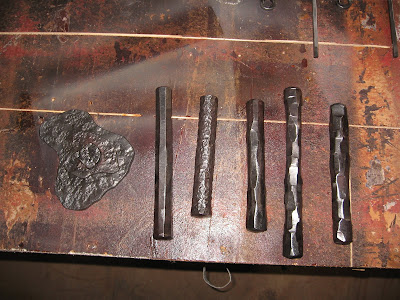 All of the samples not made on the new texture dies were made using my combination dies torched out of a section of railroad track. The octagonal one reminds me of rock formations like Devil's Tower and the Giant's Causeway, so I didn't try to make the faces all even, just smooth. The look for the ironwork is supposed to be raw and primal anyway. The two with the "Dark Tower of Barad-dur" textures are only slightly different from each other. They were the ones the architect liked best.

Today I forged out a quick sample of half a door pull from 1 5/8" round. The amount of offset, the shape of the flattened portion, and the exact texture aren't necessarily what the final would look like, but they give an idea of what can be done. Most of the forging was done on my hammer, and the rest with the press. 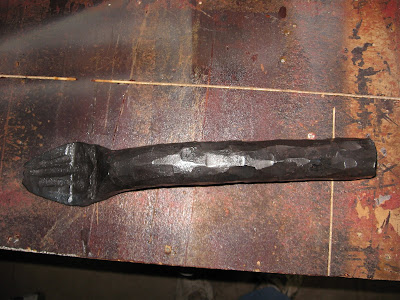 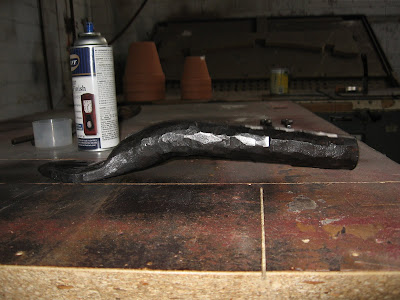 Having a power hammer is sure a game changer! Even if it looks a bit rough.
Posted by Helm Enterprises, Forging Division at 6:31 PM 2 comments:

For those of you in the San Antonio area, I will have my first booth at an art fair this Saturday. It is the First Annual Tobin Hill Art Fair, located at the Josephine Theatre at 339 W Josephine Street from 9:00 a.m. to 3:00 p.m. I'll have roses, candle holders, blades, sculpture, and some nifty gardening and barbecuing gear as well. Hope to see y'all there!
Posted by Helm Enterprises, Forging Division at 10:25 PM No comments:

This was a commission that fell in my lap right at the last minute, Saturday afternoon prior to Valentine's Day on Monday. A man who was touring the Hausmann Millworks where my shop is located saw some of my steel roses and ordered a dozen of them, to be finished on Valentine's Day. It took about all I could do and a bit of help from a friend, but I managed to get them completed on time. 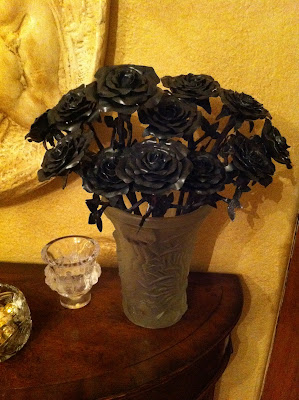 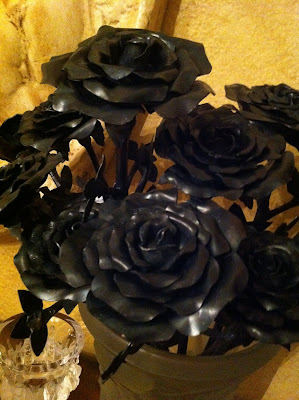 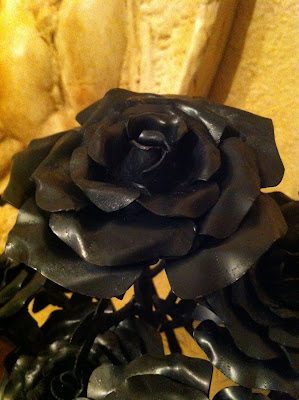 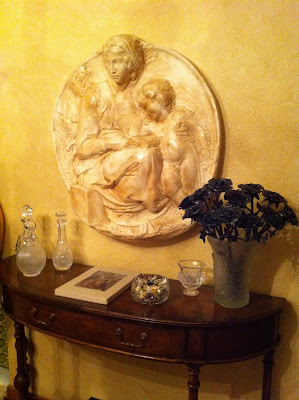 Altogether the bouquet weighs around twelve pounds. The customer reported that his wife loved them. I didn't have time to take any pictures before they left my shop, so he kindly took these pictures of them in his home for me.
Posted by Helm Enterprises, Forging Division at 2:36 PM 1 comment: