Isn't the Blade Show coming up sometime soon?  Better get a move on!  (These are not all I have, there's a decent showing squirrelled away ready to pack and take.)

Some forged 80CrV2 blades ready for their handles to be impregnated with marine epoxy. 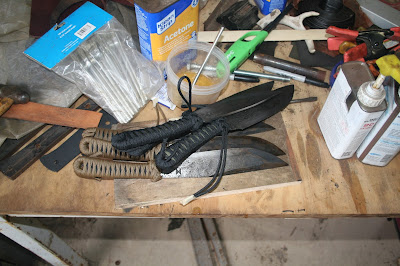 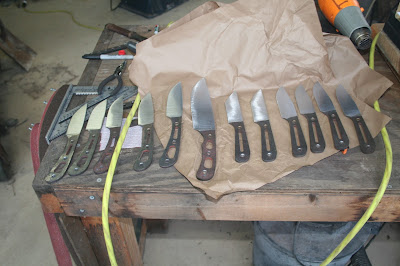 And hardened, about to close the kiln and start their first tempering cycle. 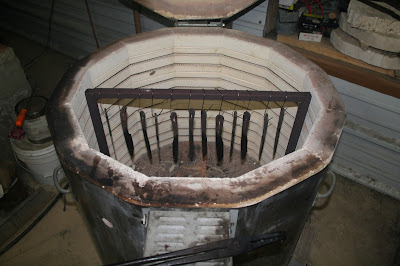 There will be representatives of 6 of the 9 mid-tech designs I'm working on.  Wish I could have them all, but it just doesn't work out logistically.
Posted by Helm Enterprises, Forging Division at 10:45 PM No comments:

In addition to feeding mosquitos and getting ready for the Blade Show, I've been working on a fair number of commissions this month.  Three of them are variations on my sinuous bush sword.  This is the first one finished.

The blade is 16", forged from 5160, with an integral socket handle wrapped in marine epoxy-impregnated paracord.  The raised clip is a false edge. 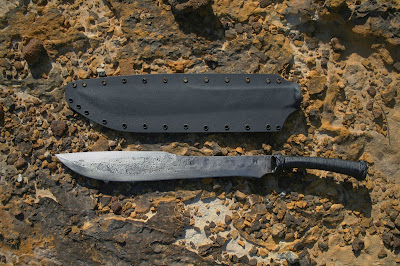 A black Kydex sheath to accompany it. 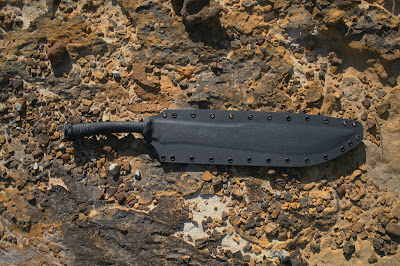 And a look at it in hand. 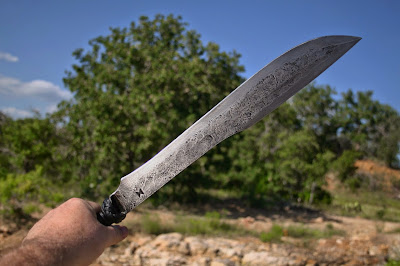 The second of these got heat treated tonight, and the third will have to wait until after the Blade Show to get finished up.  And now to hit the hay so I can get to working on sharp-and-pointies in the morning.  :)
Posted by Helm Enterprises, Forging Division at 9:34 PM No comments:


Check out my "Available Work" on the right of the page.  Just added a piece for sale.
Posted by Helm Enterprises, Forging Division at 10:41 PM No comments:

This was the quickest turnaround time on any order I've ever done, and it was just happenstance.  I had a fellow call me up wanting a shorter version of a bush sword that he had seen posted on a bushcraft forum.  This particular bush sword is on my business card in a picture showing it having cut through a tree almost as big around as the length of the blade.  He wanted a shorter version, which would really take it out of bush sword proportions into large camp knife territory.  I was already going to be forging another bush sword blade and had a looming bill that could be eased with another order, so I took it on and had it shipped out the next week.

The blade is 10.5" including the choil, and the handle is an integral socket with marine epoxy-impregnated hemp wrap and two-strand Turk's head knots.  It's forged from 5160. 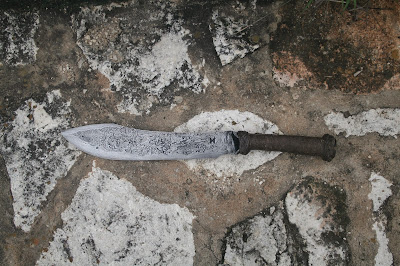 A shot of it in hand with my camera acting funky. 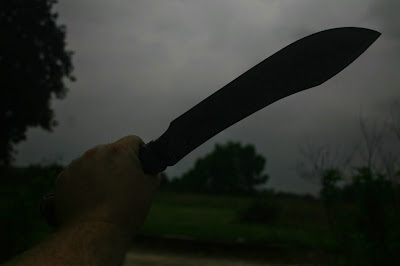 Here's the picture of the original that's on my business card. 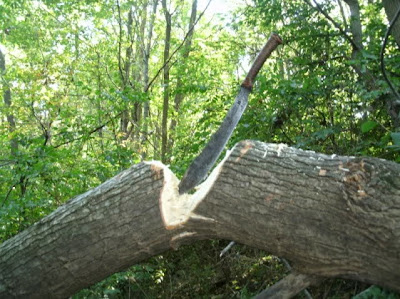 And after cutting all the way through. 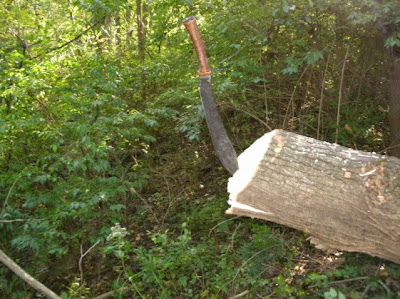 And a look at some of the forged work I plan to have on my table in Atlanta.  Still need to do tactical tomahawks and mid-tech fixed blades, too. 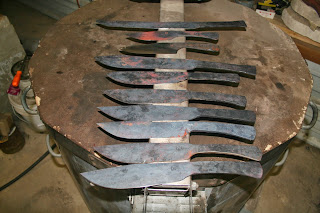 Posted by Helm Enterprises, Forging Division at 11:41 PM No comments: