These are the last of my inventory for the Blade Show.

I'm not particularly good at naming every blade or style of knife that I make. Some knifemakers can come up with a new name for each one. "Gutripp Skullcrusher". "Asmodeous's Revenge". "Brothers of Aggression". :D So a lot of times when discussing design with a customer, I end up refering back to a previous blade by describing, "That one I made for the airman to take on his SERE training (http://helmforge.blogspot.com/2012/01/primaltactical-sere-knife.html)" or, "Those three I made for the Marines (http://helmforge.blogspot.com/2012/03/three-knives-for-u-s-marines.html)". So I decided that when referring to a knife intended for use by military personnel, particularly one based off of the SERE knife, I wanted a specific name. Calling them "soldier knives" would not please non-Army service members, though that tends to be a civvy generic term for military personnel. I talked about it a bit with some military customers and members of various forums and decided that "warfighter" covered what I wanted to say.

So these are warfighter knives, intended for use by folks going into harm's way in service of their countrymen. Most of these are based on the airman's SERE knife, though there is one little dude that is a tad different and a bigger one that started out with the intention of the same profile as the others but began pointing elsewhere. I decided to let it go where it would and am pleased with the result. 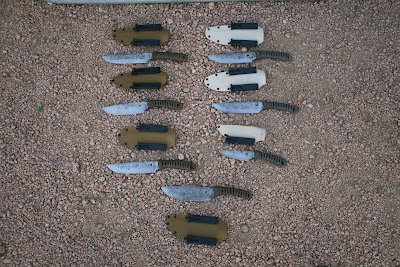 They were all forged from 3/4" round 5160, given my typical triple normalization, triple hardening, triple tempering heat treatment cycle I use on that alloy, wrapped in various combinations of black, desert tan, and coyote brown paracord with two-strand Turk's head knots that was then impregnated with Minwax Wood Hardner, and sharpened to shaving sharp. Most have a blade length approximately 7" long and an overall length around 12". The little dude has a blade length of 4 3/4" and an overall length of 9 3/8". 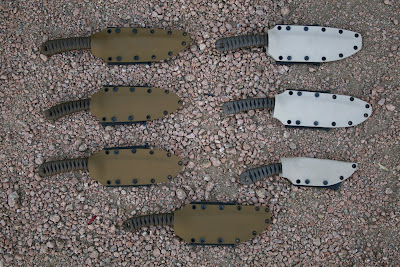 All have Kydex sheaths that match the color of the paracord on the knife's overlay. All but the little dude have two MOLLE locks, while it has a single.

This picture shows the typical profile on the left (this particular one has already sold), the little dude, and the oddball up closer. I realize that the profile of the oddball is a bit hard to see in detail, so I'll see if I can get a better picture tomorrow before packing it away. 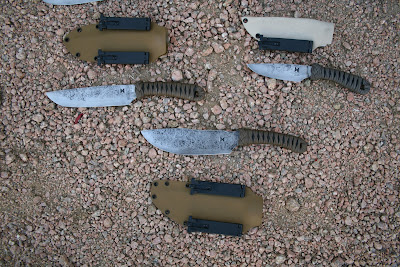 Got a little more to do getting ready, but most of my preparations for Blade are done! Yay!

Posted by Helm Enterprises, Forging Division at 9:51 PM No comments:

More for the Blade Show. :)

Aggression's younger brothers will join their elder sibling. They both have recurves, which was not present in Aggression, and each has a different tip and end of the handle wrap. All have fully sharpened top clips that will shave hair, all are forged from Aldo's 1084, all are wrapped in Minwax Wood Hardener-impregnated paracord with a three-strand Turk's head knot. 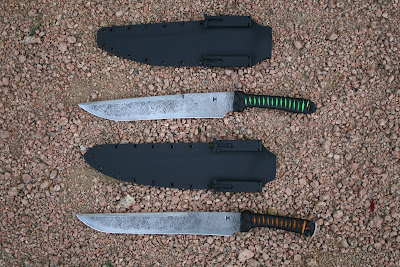 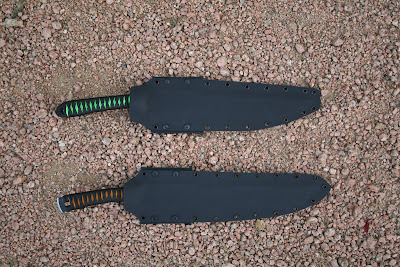 Also for undead decapitation duty will be this zombie killer bush sword forged in 5160, with an integral socket handle wrapped in retina-searing neon orange paracord and two-strand black Turk's head knots fore and aft. Although its clip is a false edge, it makes up for it with a longer reach with a 15 1/2" blade and 22 1/2" overall length. The blade profile is based on a blade from Thailand that was in an article by Reuben Bolieu in Tactical Knives magazine some months back. 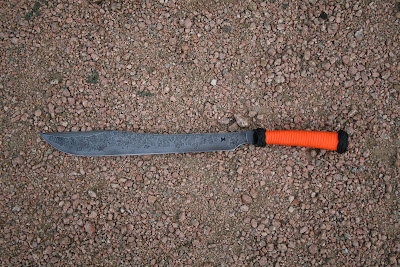 And the whole family together, ready to serve at the first sign of an outbreak. :) 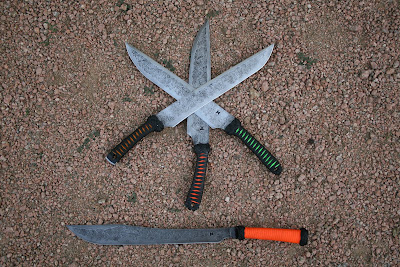 Posted by Helm Enterprises, Forging Division at 12:16 AM No comments: