All right, for those of you unfamiliar with the term, a "knife in the hat", or k.i.t.h., is something that shows up relatively frequently on knifemakers' forums. Essentially, a set of guidelines for a blade are set forth, those interested in participating sign up, at the end of the time period all the names are thrown into a hat and drawn out, and whoever gets your name sends you their blade and you send whoever's name you get your knife. Understand? Good!

So, over on PaleoPlanet, one of the moderators proposed a k.i.t.h. with the conceit that: "The zombie apocalypse has arrived. You're trapped in a scrap yard. Your vehicle is parked 50 yards outside the fence. Several dozen zombies are gathered outside the fence, patiently waiting to make you dinner. (Good thing they're too dumb to climb the fence.) You need to fight your way back to your vehicle, but -- inexplicably -- you're unarmed. You have access to several junked vehicles, so you have oil for quenching and various springs, and there's plenty of miscellaneous scrap metal around. You have only a few basic tools, an improvised anvil, and a few files that you found in the back of an old work van. But you only have a day's supply of water, so you can't afford to fool around. You need to make yourself an edged weapon that'll get you to your car. Could be a sword, an axe, a pole arm, a big Bowie, the world's biggest set of pruning shears -- your call. You have no sandpaper, no stones, and no power tools." Some rule-bending is possible if necessary. Here's the thread: http://paleoplanet69529.yuku.com/topic/34735

I decided to join in the fun. I've never actually participated in a k.i.t.h. before, but this seemed right up my alley.

My thought on this was that I was dealing with Romero-ish zombies, so they could be avoided if I was quick. I needed something that would be useful at the very close range that one would no longer be able to avoid a zombie and would have to engage - most likely if surprised or somehow cornered. It needed to be something fast to deploy, quick to swing, and devastating to use. I wanted something with one-swing limb-severing capabilities. Something along the lines of a CRKT Hisshou seemed to fit the bill.

This is what I came up with in one day's working time: 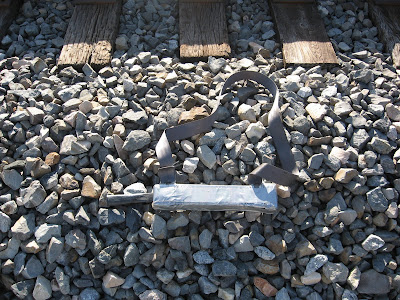 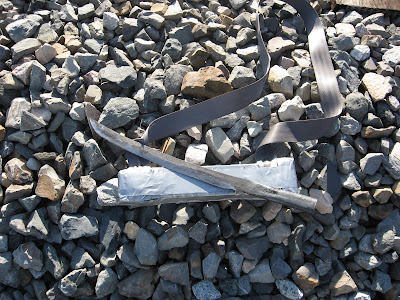 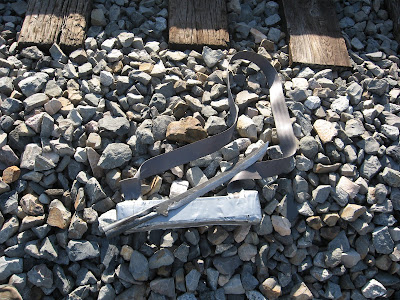 A wakizashi forged in a junkyard would obviously be made out of a leaf spring. If I'm engaging zombies, I want to have a darn good grip on this, and I don't want using it to hurt, causing me to drop it or weaken my grip. I didn't want a wrap that might come loose or any kind of tape with needless stickiness. So the best way to achieve a good, comfortable, stong, easily gripped handle was to do an integral socket handle. This is without a doubt the ugliest socket handle I've done, but it is quite comfortable and fills the hand nicely, which would not have been the case with a non-cord-wrapped full tang. Strength is not in question; this is probably the strongest tang/blade transition out there. A small integral guard would keep my hand from sliding up the blade if I needed to stab.

I bent the rules a bit. I figured that I was at the junkyard when the initial outbreak occurred and there was still power. Stock removal was done primarily with an angle grinder, first with a hard stone and then a flap wheel. The junkyard where I'm picturing this taking place (Ashley Salvage, for those of y'all in San Antonio) has a few welding supplies they sell in the office, so I figured it wasn't a stretch for them to have some grinding disks. And quite frankly, I was following my memory and forgot we could use files. That would have made life easier, as there is only so much steadiness I can have with an angle grinder, so I finished off the last part on a coarse whet stone (which I figured stood in place for a piece of fine cement at the junkyard), followed by a broken cinderblock and sharpening on a broken brick.

Oil quench, of course. In the junkyard I would have used motor oil, but working in my shop I used my standard veggie oil. Triple quench, temper selectively drawn by eye with the tip drawn back for extra toughness. The blade actually straightened a fair bit in the quench, which was fine; I had more curvature in it than I had wanted anyways, so it turned out closer to what I had envisioned.

Having put so much work into it, and of course never knowing when you'll need another weapon, I figured I needed a safe way to carry it. So I made a saya (HA!) out of a board from a pallet. I used my Leatherman Core's saw to cut it to length and then to rip it in half. I used the wakizashi I had just finished heat treating to split off a section from the left over piece, and roughly drawknife and chisel (the kissaki portion was used here) it to a wedge shape for a welt. Using straightened nails from the pallet, I nailed the two side boards together with the welt along the bottom, forming a pie slice -shaped hollow. A nail across the top engaged the integral guard when sheathed, keeping it from going into the sheath too far. Some baling wire holds the top of the pie wedge together. A carrying strap would be essential, something that would hold the saya at a comfortable height, and be quick to put on and off. I cut the seatbelt out of a Jeep Cherokee at Ashley Salvage, poked holes in it with the awl on my Leatherman, and sewed it with some more baling wire. The saya worked great except that it was not a tight enough fit to prevent the blade from sliding out if it tipped forward. I took a piece of corrugated cardboard, ran it down one side of the opening and down the outside of the saya to anchor it with some duct tape. The carboard makes it a bit tight to draw the blade, but it is loosening up as it is drawn and re-sheathed so that it can be done quickly. Some more cardboard to make an end cap on the other end of the saya, and then I wrapped the whole thing with duct tape, reinforcing it and locking the seatbelt shoulder strap in place. Ashley Salvage does sell duct tape, by the way.

Here I am wearing it and drawing the blade. A small push with the thumb (which I understand is used with real Japanese swords) and it unsheaths beautifully. The blade is worn edge upwards, and the strap is set up so that it can be worn easily by either a righty or a lefty. 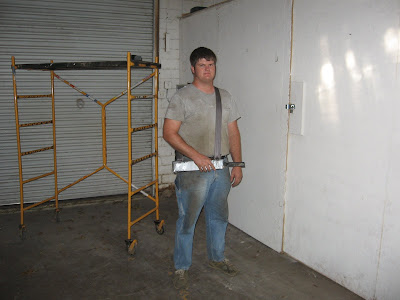 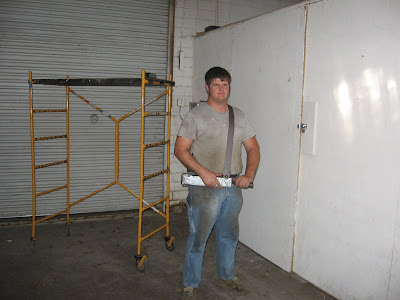 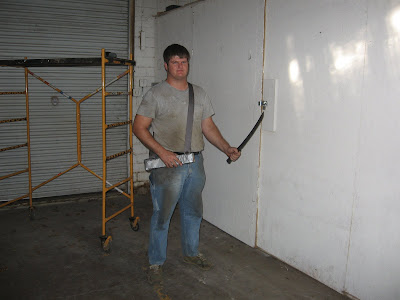 And what good is an untested blade? This is a chunk of elm as big around as halfway up my forearm. It is solid and hard. I timed how long it took to cut this; two minutes, and I could have been quicker if I hadn't had a few hasty mis-strokes. No apparant change in the edge afterwards. 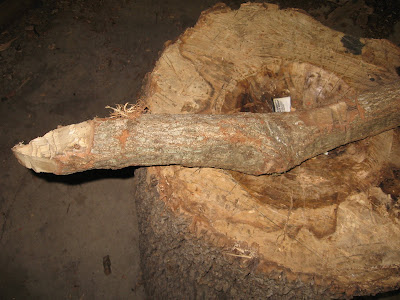 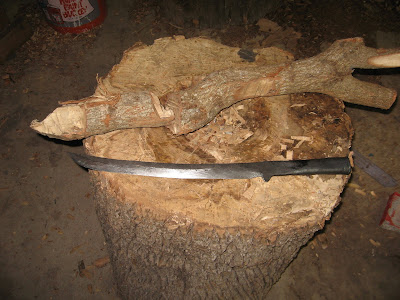 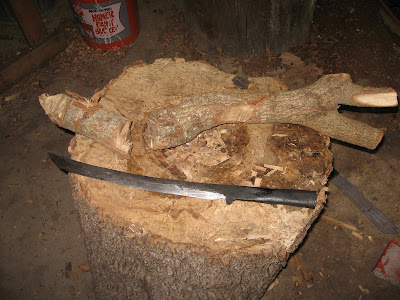 I also did some water bottle cutting tests which I had filmed with my digital camera. It did well at those. I had never uploaded video to Youtube before, but these prompted me to see what was involved in doing so. I've already posted the links here in the blog.

Conclusion: The edge is not nearly as sharp as I'd prefer, but it performed well at the cutting tests I put it through, and it's not at all bad for an edge put on with a cinder block and a brick I picked up in the alley behind my shop. The edge bevel is not as straght and even as I'd like it to be (those files sure would have been handy ), but has no bearing on its functionality. The handle is ugly but comfortable. The saya induces laughter on sight, but is actually fairly decently engineered and by-doggies does precisely what I wanted it to. The blade shape is pretty dead on to what I was aiming at, and ends up with the blade being 14.5" long. I'd call that a wakizashi instead of an o tanto, but I'm not an expert. It's light and fast and cuts well. I could have done better with more time, but I'm happy with it. If anything would get me alive to my pickup beyond the ravenous dead, it'd be this.
Posted by Helm Enterprises, Forging Division at 12:05 PM No comments:

A new video letting you see the wakizashi and saya up close: http://www.youtube.com/watch?v=MaG7fQeDQPY
Posted by Helm Enterprises, Forging Division at 9:59 PM No comments:

The world is no longer safe...

Too bad I don't like the sound of my voice on recordings. :D

That's all for now, but I will do at least one more video with this showing the whole kit up close. I thought I had done that already, but apparantly hadn't pushed the record button. Sheesh!

These are a pair I recently made for my girlfriend's parents as anniversary presents. The veggie chopper, a quasi-Japanese santoku, was my idea and the paring knife was my girlfriend's design. Both blades are forged from steel cut off of a peanut digger blade from my family's farm, differentially hardened in veggie oil (the santoku has a faint hamon that I can't hope to capture with my camera/photography skills), and sharpened to the point where they will shave hair. The bolsters are textured copper scraps left from a baptismal font basin project I'm working on. The handles are a kind of wood called "Texas ebony" which apparantly grows from Laredo on south. Seems like the name "Mexican ebony" would be more accurate, but no one asked me when they named the tree long before my birth 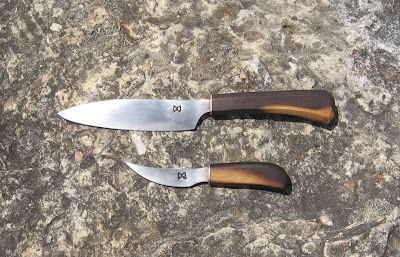 The santoku's handle is faceted, while the paring knife's handle is more organic in shape. The light spots on the wood in the first picture is the sapwood; this second picture shows more what the heartwood looks like. It's some darn tough stuff and didn't like being worked any other way than just grinding it into shape. 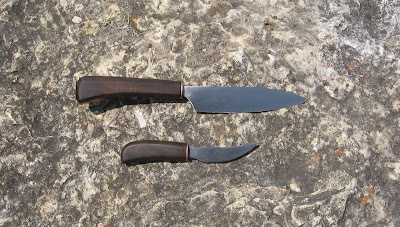 Posted by Helm Enterprises, Forging Division at 12:11 AM 2 comments: