I was recently approached by an Army sniper stationed in Afghanistan to build him a knife that would work equally well at clearing brush and gathering vegetation for building "hides" and for use as a weapon in up-close-and-personal encounters if need be.  He said he already carried garden trimmers and a folding saw, but as he put it, "they're pretty lame and useless as weapons".  :D

The knife on my website that had caught his eye was the latest addition to the Aggression brethren. 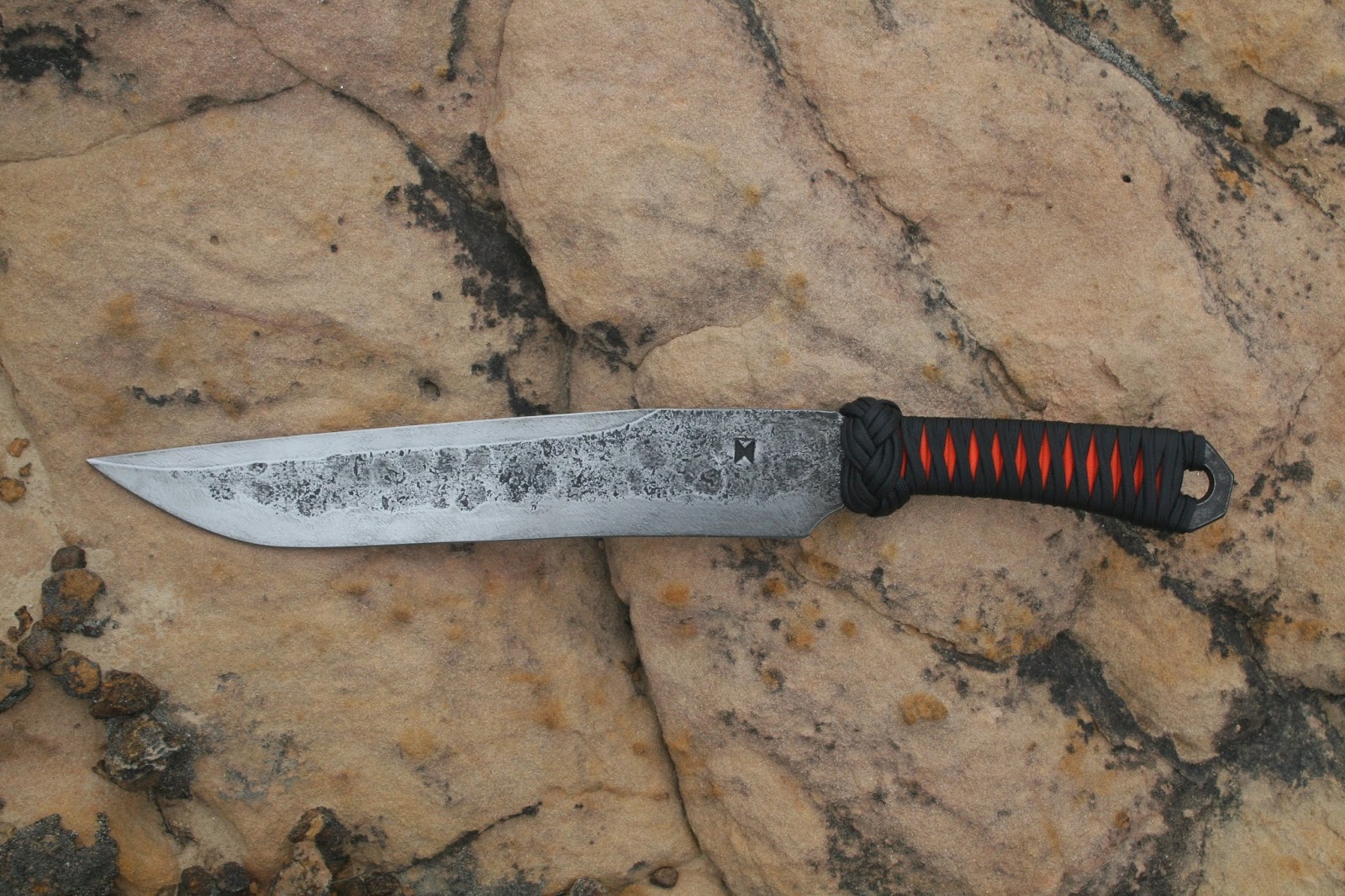 I had traced the blade of it prior to wrapping the handle, so I had a pattern to start with.  I made a few suggested changes to make it more practical, which I made in blue Sharpie, to which he agreed.  We also both agreed that retina-searing orange would be a poor choice for a sniper, and settled on a more subdued wrap for his.  :) 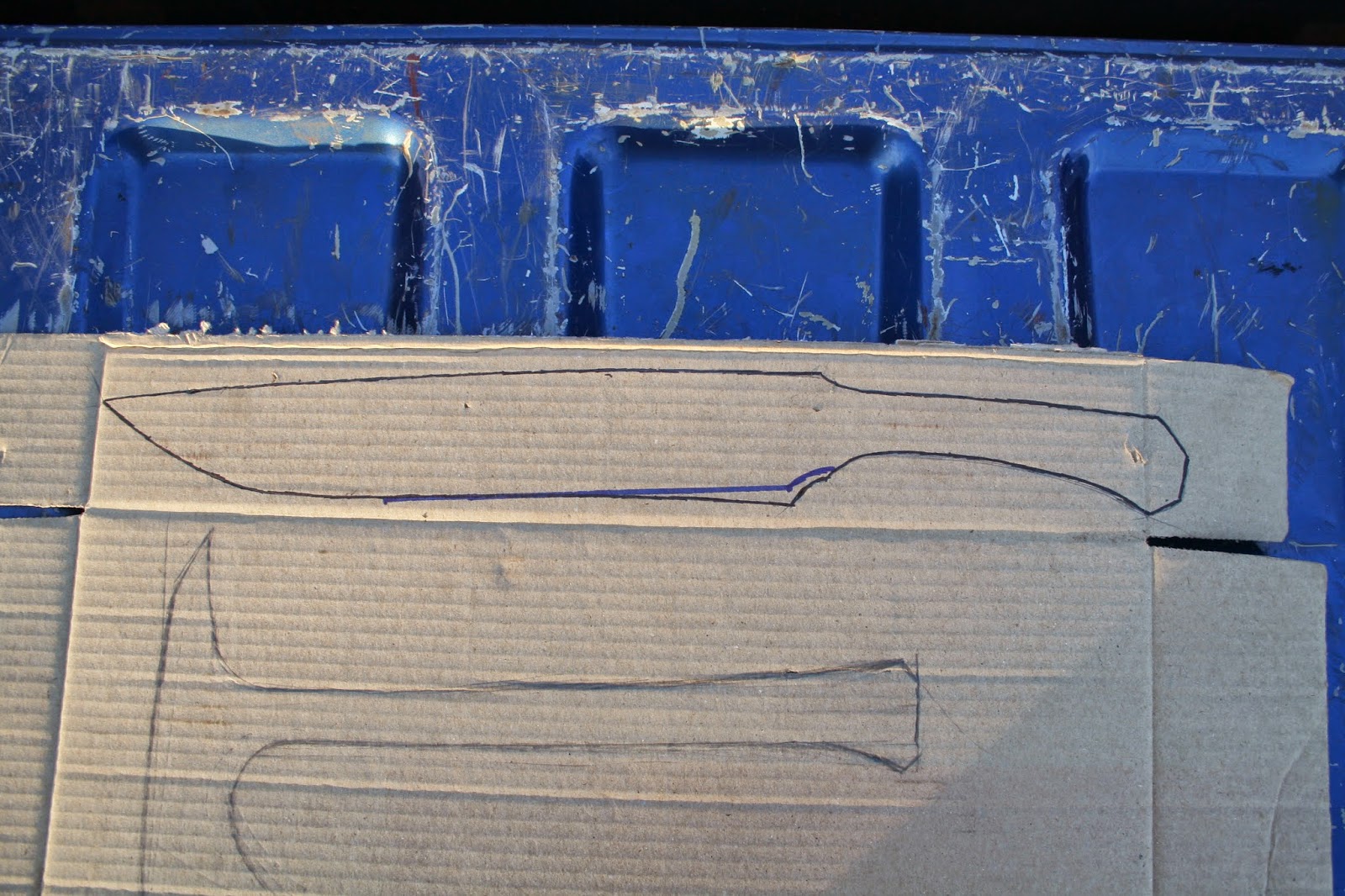 I made a posterboard pattern of the altered design, and after a couple of false starts, got the blade forged.  It took several cycles of cutting away excess metal, cleanup grinding, and re-forging to get the desired profile, weight, and balance. 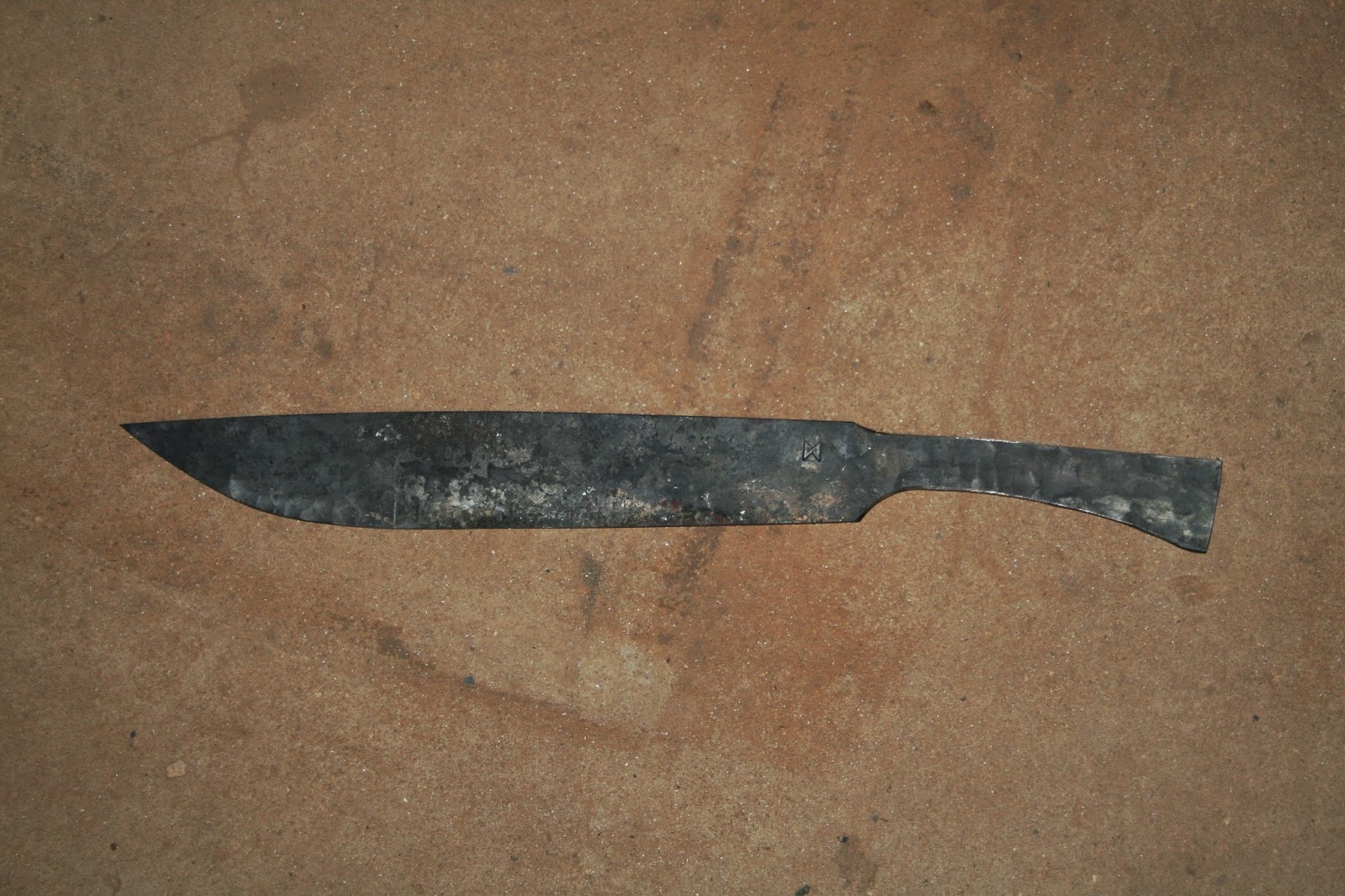 After normalization and an overnight vinegar soak to eat off the scale, it was time for stock removal and heat treatment. 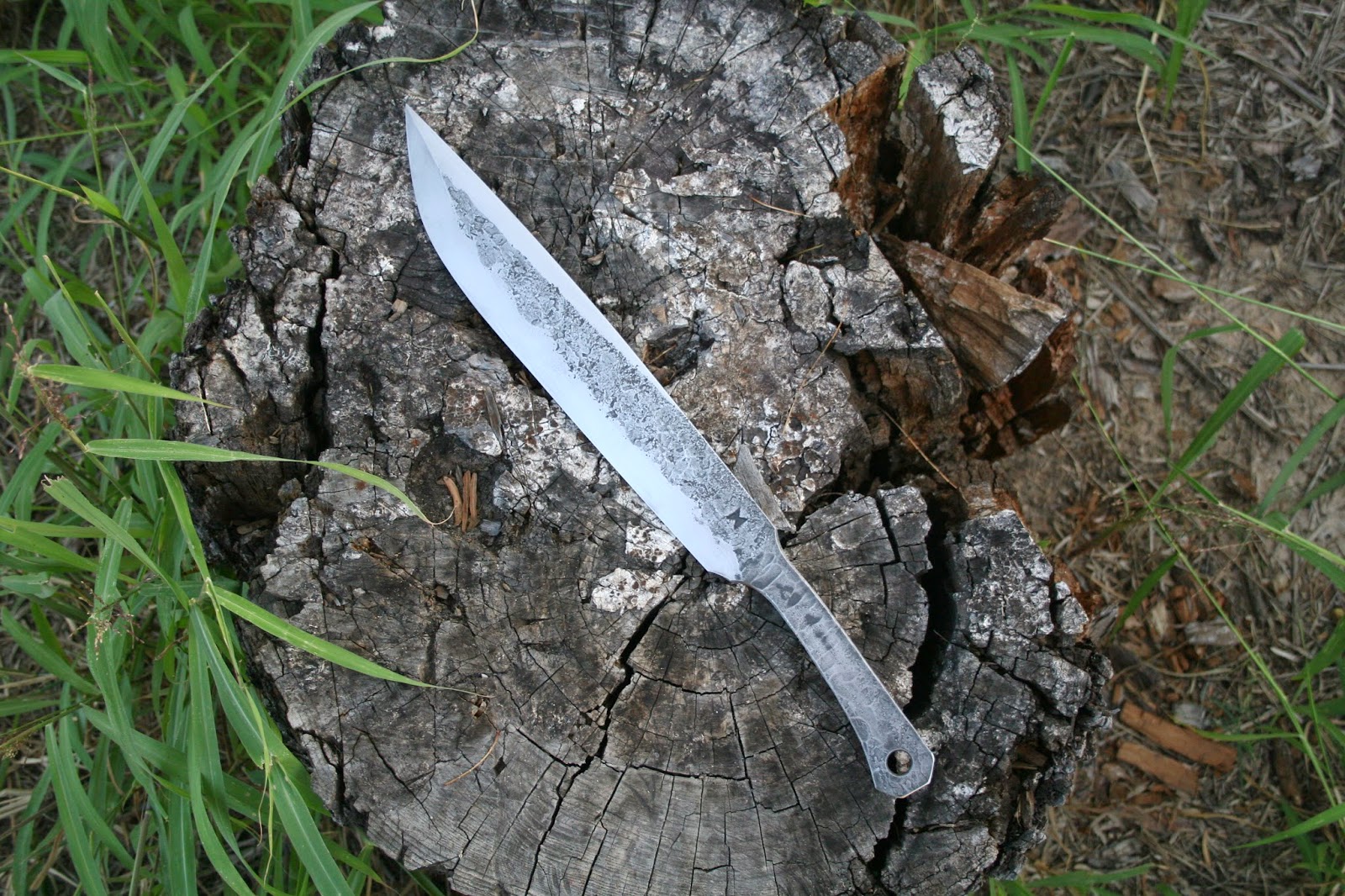 The wrap on this knife is a bit different from what I've done before.  Usually, I use an underlay of paracord with its core intact to build up the bulk around the tang, with a stripped-core paracord overlay.  This time, I laid a foundation of a slab of leather on either side of the tang, the edges heavily beveled to keep from getting square corners on the handle, then wrapped a black stripped-core underlay and tan stripped-core overlay on top, capped off with an intact-core three-strand Turk's head knot.  The whole wrap was then impregnated with marine epoxy, making a solid handle in place on the tang.  The leather foundation helped make one of the most comfortable handle wraps I've done, and I'm very pleased with the outcome. 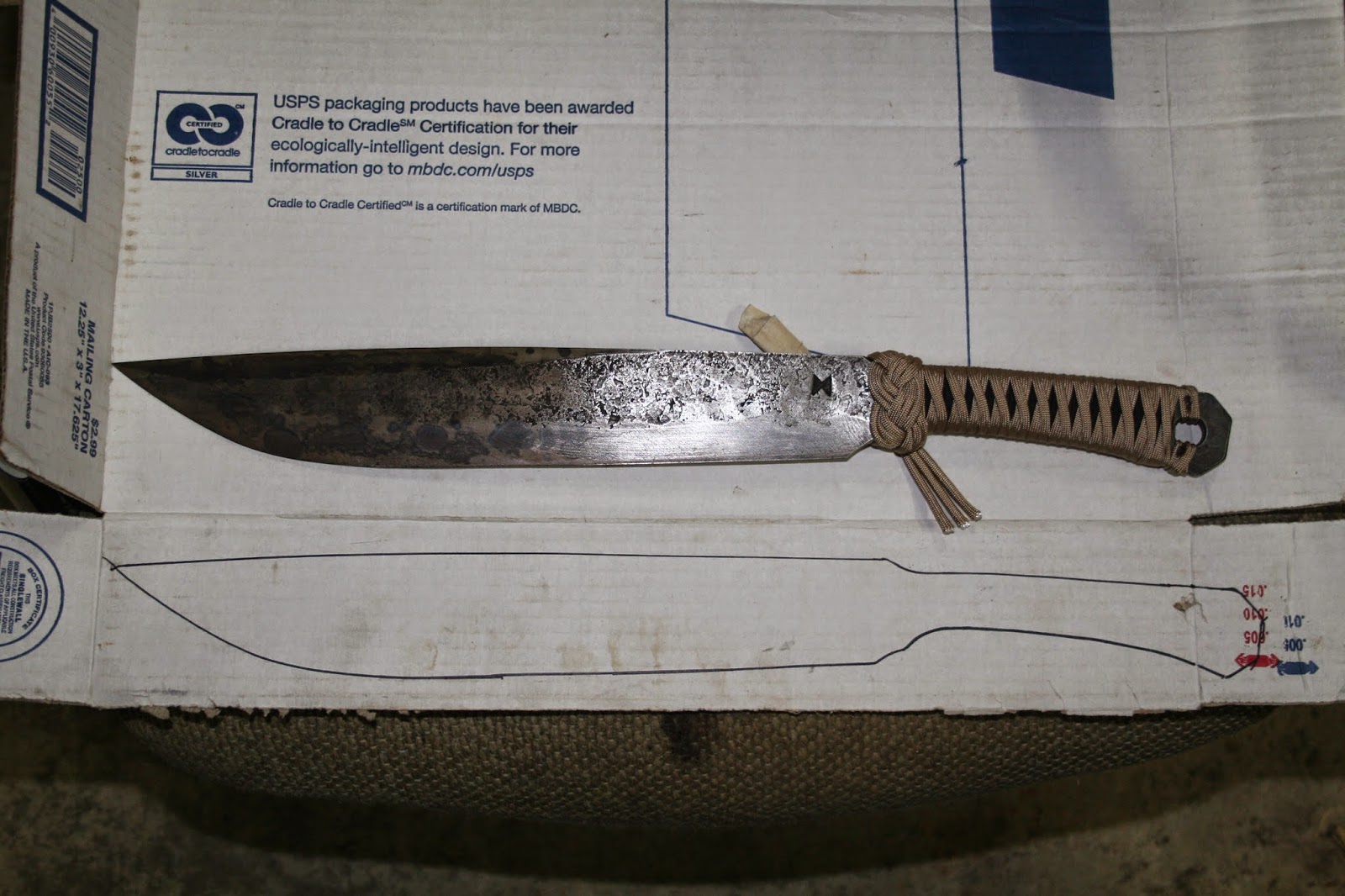 After establishing the edges, the whole knife was dipped in solution to give it a black oxide finish and the final sharpening done.  The epoxied wrap was impervious to the solution.  I had tested out dipping a wrapped handle in before trying it on his, of course.  :)

As beautiful as the ostrich-hide-inlaid leather sheath was that Luke Swenson made for the previous Aggression is, the sniper and I decided that Kydex was the way to go for his. 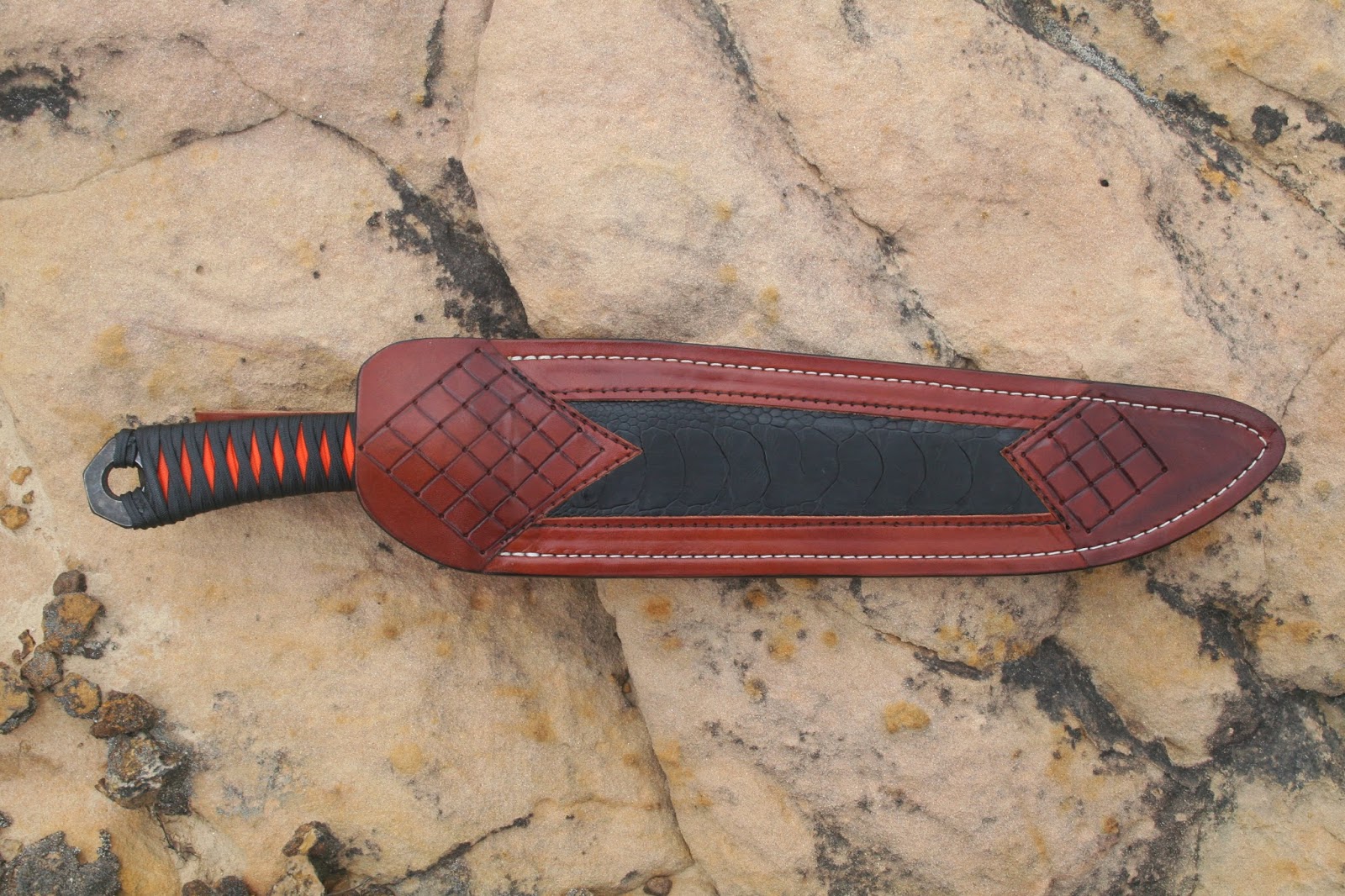 This was the most complex Kydex sheath I've built to date because I wanted to give him a lot of carry options.  He wanted to be able to wear it attached to his pack or from his belt, and for it to have an extra retention strap, something I haven't done on a sheath before.  We also both like the concept of using the sheath as a platform for a survival kit, so that factored in as well. 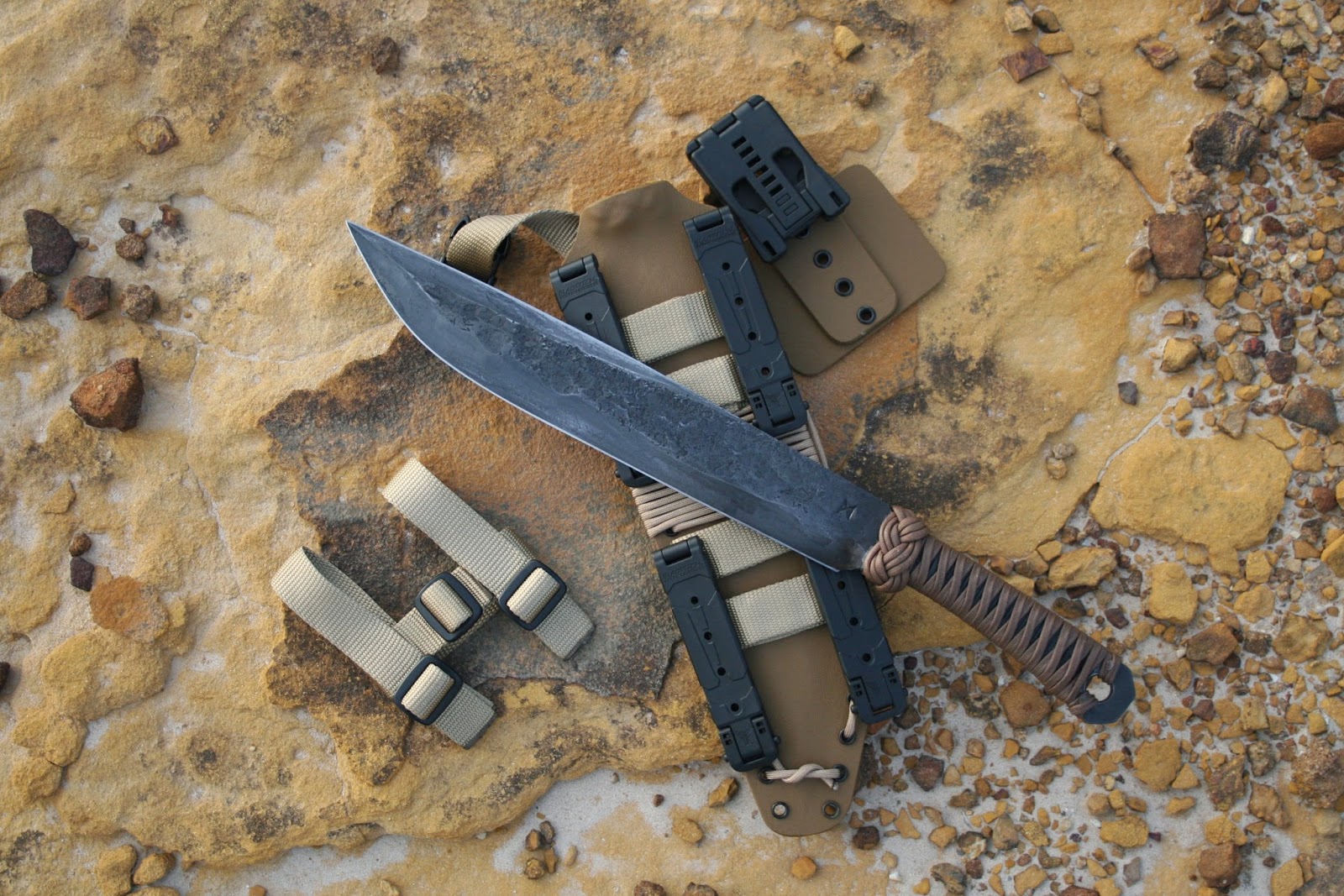 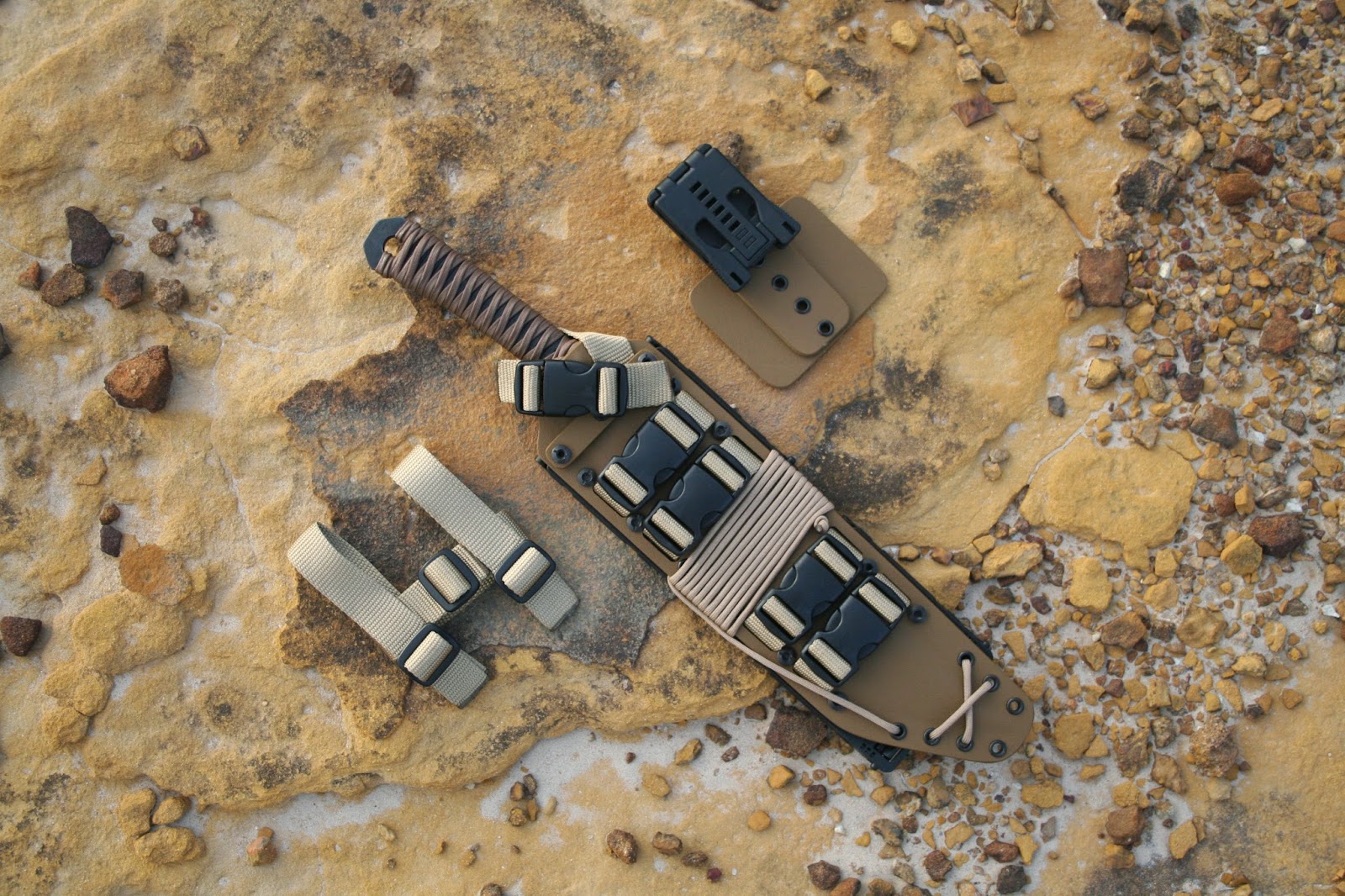 The two sets of MOLLE locks are for attachment on a pack, the straps can be used for such or for the attachment of MOLLE pouches to the outside to carry a survival kit, and the paracord is the same as used on the handle wrap, arranged where a piece is quickly accessible, but won't accidentally come loose from the sheath even if the end comes untucked.

Here's the "prosthetic" piece I built to attach the retention strap. 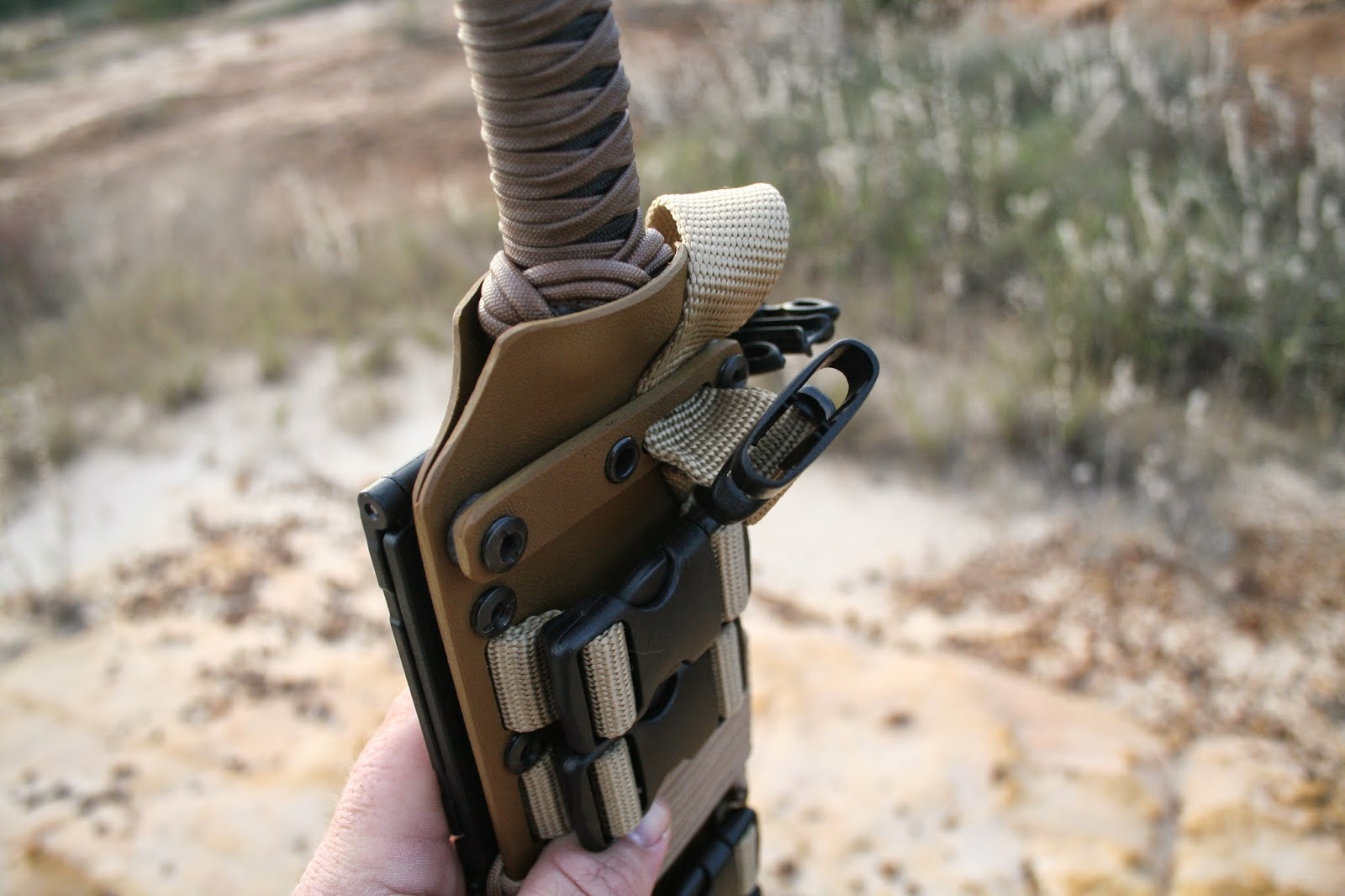 I wanted a quick way for the sheath to go from pack carry to belt carry, so rigged up a couple of quick-detach belt holders that slip under the MOLLE locks.  The first was the webbing one, which is more flexible. 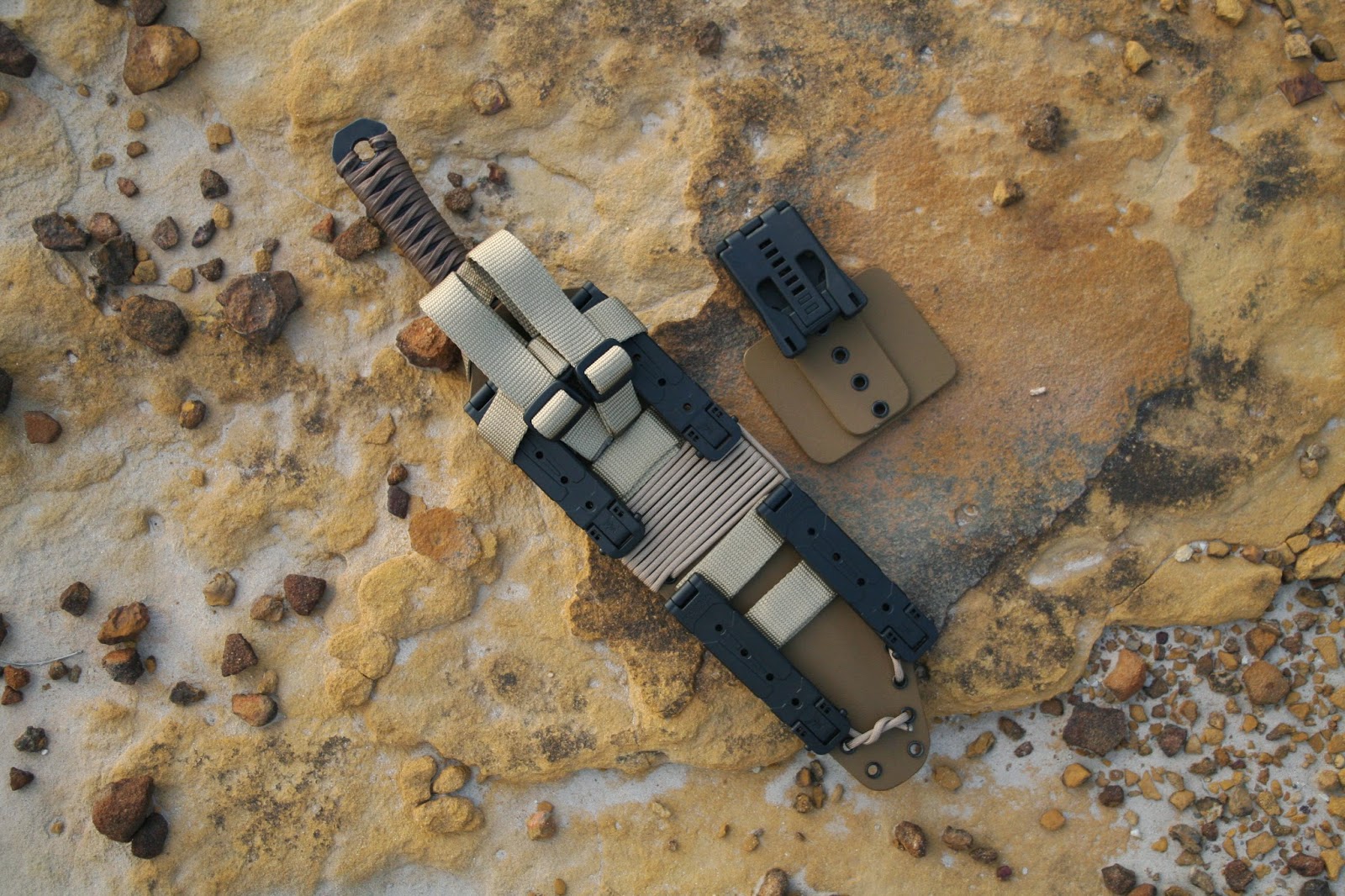 I decided that he might want it more rigid on his belt, so I built a second one out of Kydex with a TekLok. 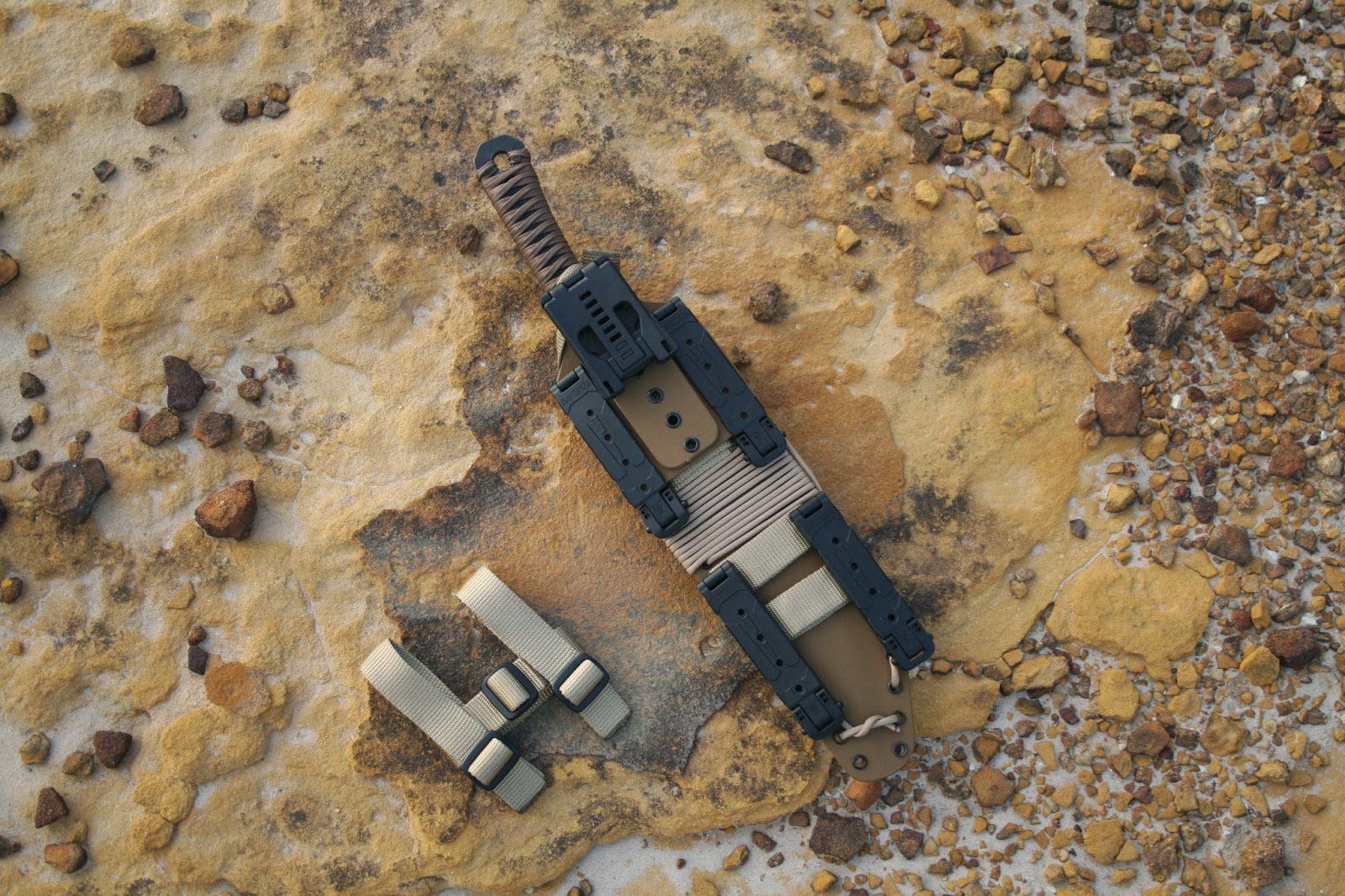 Both belt carry setups are height-adjustable and can be swapped out in under a minute.  Never seen another setup like that.  Doesn't mean no one else has done it, just that I haven't seen it.  :)

I'm looking forward to seeing how he ends up setting up the rig for carry.  I sent along what remained of the tan paracord, as well as 10 feet of the strap and some extra buckles and sliders.  He can play around with all kinds of different carry options.

And a couple of shots of the blade in hand to get a feel for scale.  I don't think I took final dimensions before shipping it out (though I can measure the tracing I did of it), but it's about a 12" blade with the top edge fuller sharpened for about 1/3 of the length. 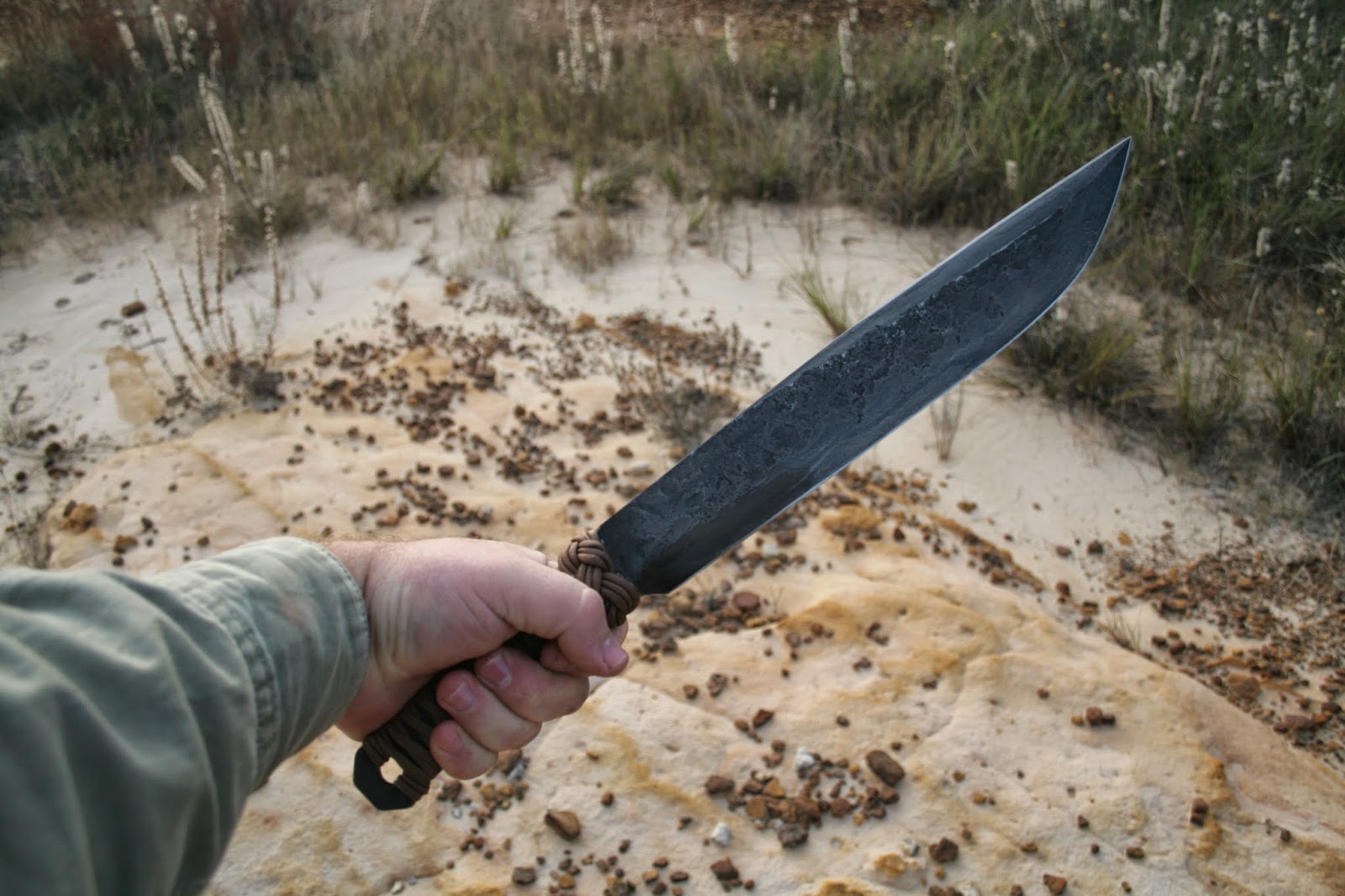 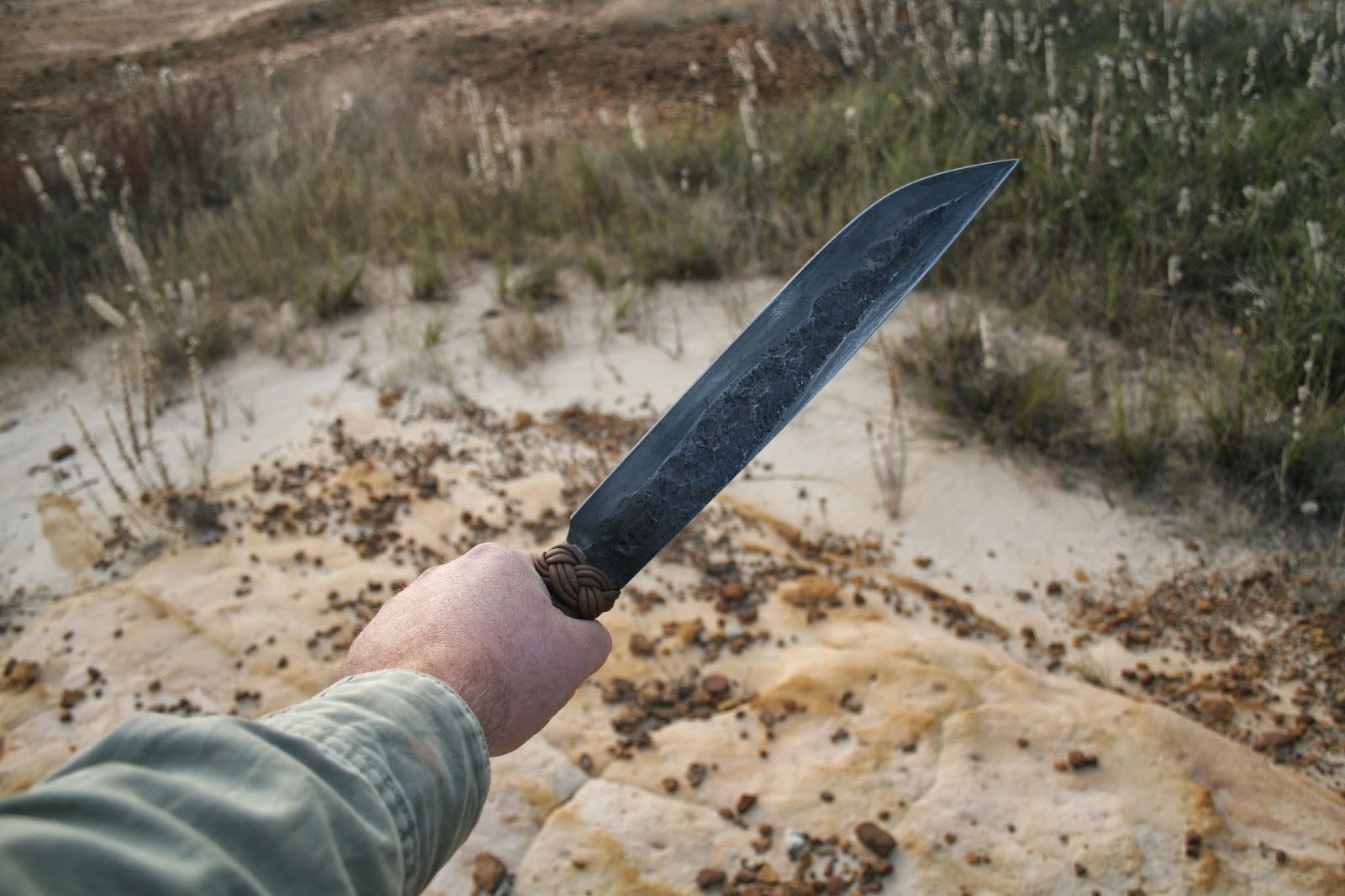 And finally, a video with most of what I just said, but a bit more:

He's pretty happy with it so far.  Said he has to look at it every twenty minutes, which is what a maker likes to hear.  :)
Posted by Helm Enterprises, Forging Division at 10:48 PM No comments:

I always enjoy getting customer feedback.  Here's some recently from our men in uniform.

The first is a picture taken on some oil rigs that the SEALs use for training off the California coast.  That's one of my Benghazi Warfighters being carried scout-style at the small of the back by my best customer.  :) 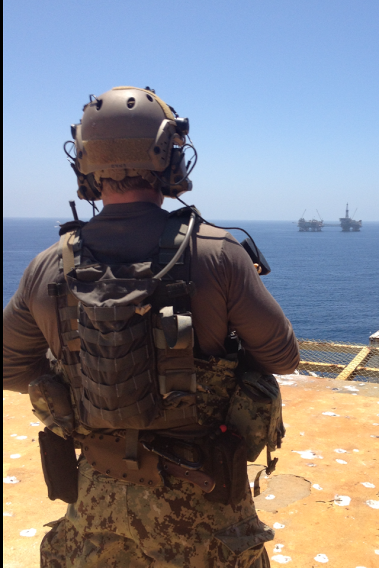 Here's the knife before I sent it to him a while back: 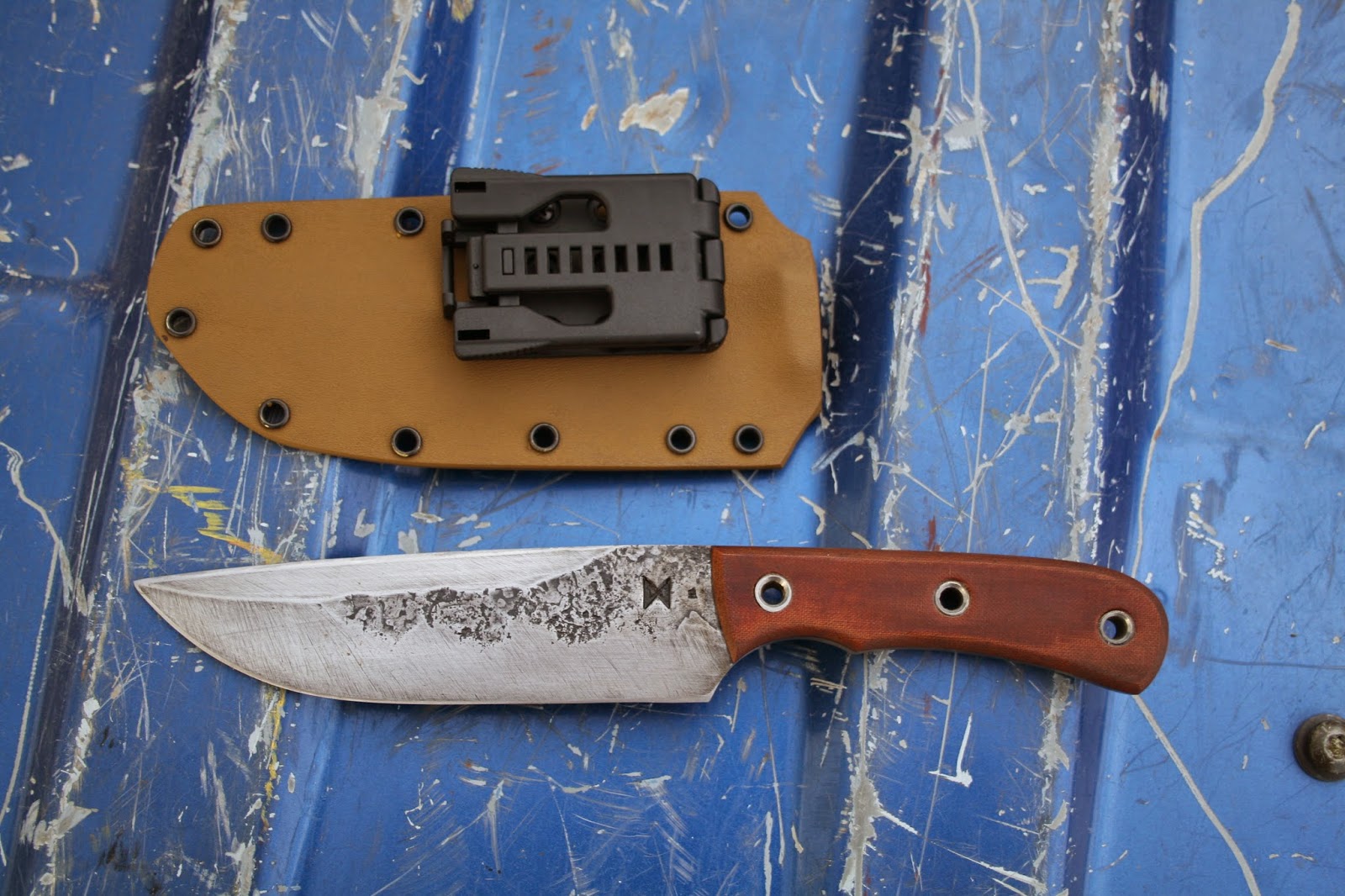 His buddy and fellow SEAL back in Hawaii who likes to bow hunt mountain goats got back in touch with me recently about his goat cleaver. 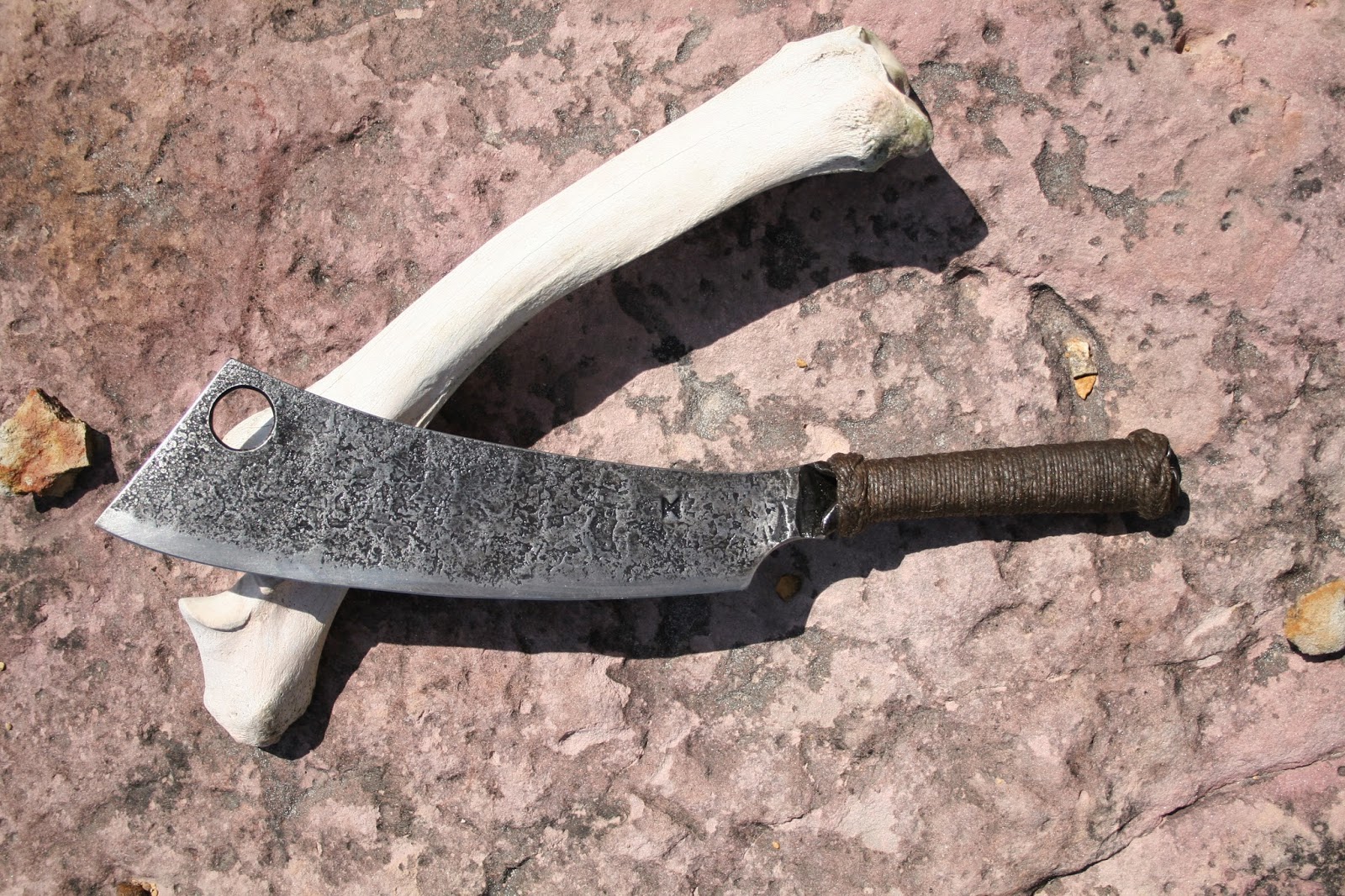 He said, "I have been putting that zombie cleaver to work! and to my amazement it still shaves a little hair after such abuse of chopping bone, trees, bamboo, and whatever else got in its way."  I confirmed with him that it is the edge that I shipped the cleaver with.  He has finally touched it up since then.  :)

And from a soldier who recently got a Benghazi Warfighter: "I took my War fighter to my grandparents house in Alpine, TX I made a fire in their firepit using well seasoned mesquite that has been dead and laying in the sun for years. The mesquite was rock hard, the saw there was very dull and wasn't getting anywhere so I used my Helmforge to chop through an average leg sized log. It would have chopped better if I put on a lanyard but just the light chopping chipping around got me to where I could smash the log against a rock to snap it in two. It dulled a bit but no chips or rolls. This knife continues to impress me." 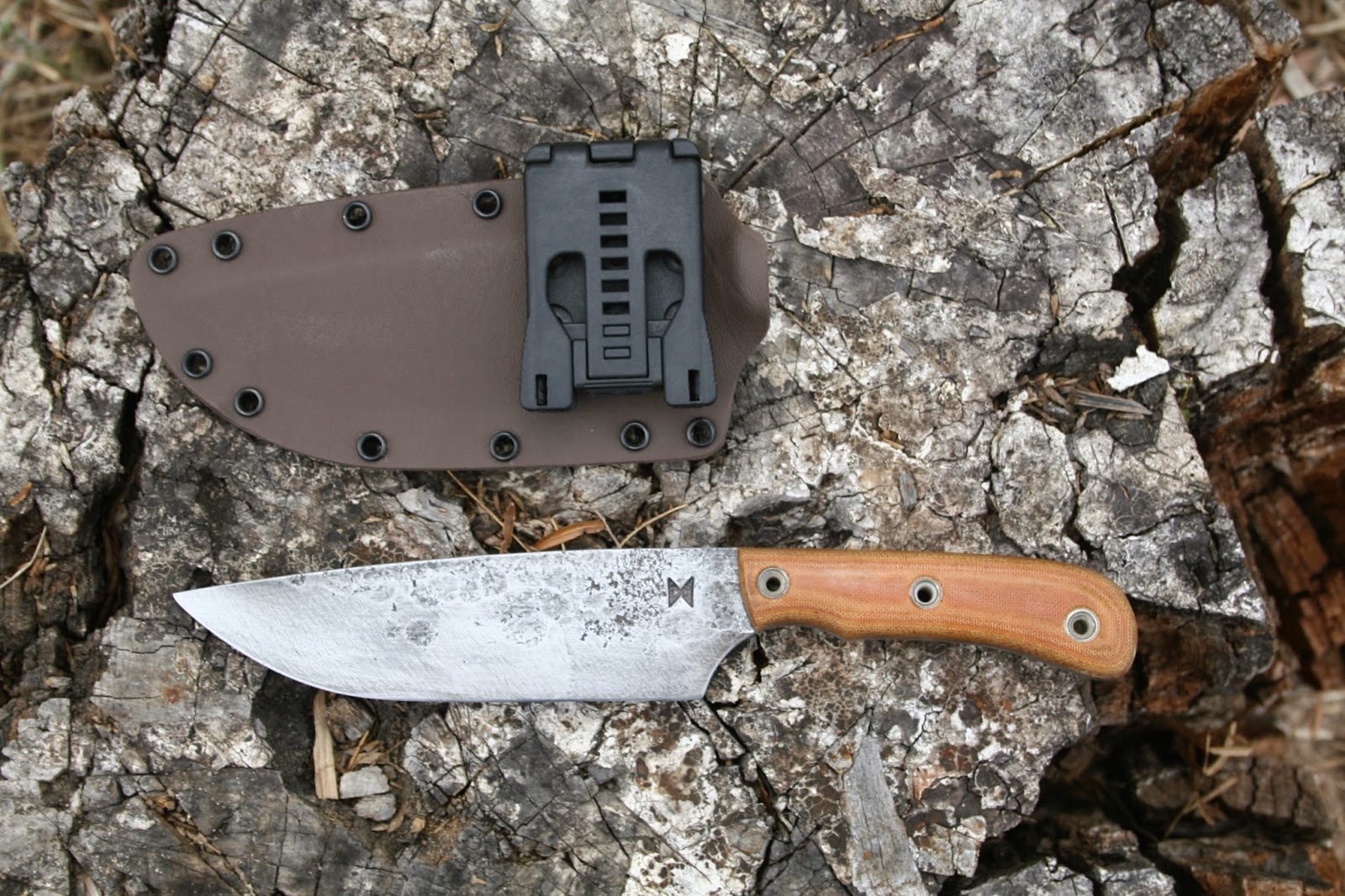 Here's a fuller review he did earlier: https://www.zombiehunters.org/forum/viewtopic.php?f=33&t=114158

Thanks guys!
Posted by Helm Enterprises, Forging Division at 9:22 PM No comments: