I've decided that rather than simply using this blog as a place to display past and current work, it would be a good opportunity in addition to pass on my experiences, thoughts, and philosophies behind what I make and why.

Although I make other things, I tend to focus on hand tools and in particular those with cutting edges. When I was little, I always loved reading fantasy works like Robert E. Howard's Conan stories, Lloyd Alexander's Prydain Chronicles, Robin McKinley's The Hero and the Crown, and dozens of others. Some time before I became a teenager, I started cutting sea cane for my grandpa using a machete. For a while there, I would cut back his grove of the tall, bamboo-like canes every summer. Sword fantasies inevetibly ran through my head while whopping away at the stalks. Around that time I also began working on clearing the wild plum bushes out of a fence row on our farm using a machete and an ax. Growing up in a house heated only by a wood burning stove, I had plenty of opportunity to split firewood as well, first with an 8 pound sledge and iron wedges, and as I got strong enough to weild it, an 8 pound splitting maul. In my later high school years, I began chopping mesquites out of the fields of my family's farm. This struggle continues, as I will be returning at the end of July for a week to try to further beat back the hydra-like bane-trees. Interspersed in all this is a lot of general brush cutting and the addition of billhooks to my arsenal.

I also received at around age 10 my first knife: a yellow-handled Schrade 3-bladed stockman pocket knife. It's just like the one Daddy carried, except that his was worn slap-dab out. Around the end of high school, I began making knives. I still carry the Schrade daily, now with the addition of a fixed blade work knife I made for myself. It wasn't until I was out of college and working as a high school English teacher that I bought any other knives. When I did, it was to see how they were made, how well they worked, and how I could do better.

There are plenty of people out there who have used blades more than I have, but there are far more people in the general public who have not. Familiarity with the work done with a tool and with the tool itself teaches one what makes a quality tool, a mid-level tool, and a poor tool. With many people lacking that familiarity, and with the wide availability of industrial production, the market is fairly glutted with mediocre and flat-out crappy knives and other bladed tools.

I spend a great deal of time reading various knife forums, and among those not in the business of making them, I see many people who put a lot of time, thought, and effort into buying low- to mid-quality knives. People will quibble over a $10 price difference between two models rather than looking at the quality of the work and the effectiveness of the design. I often see someone commenting about how they are afraid to use a nice blade, or that they don't want to spend a lot of money on a knife because they might lose it.

Allow me to opine that if you are prone to losing knives, you really should work on personal responsibility and keeping track of your gear. A knife is one of man's oldest and most basic tools. Any time society's safety nets are removed from around you, whether you're hiking in the woods, in the middle of some form of natural disaster, or walking to your car in some lonely parking lot, a knife is often the best and sometimes only means you have of preserving your life. Losing all else, with appropriate skills and knowledge, a knife can provide what you need to make it through alive.

As for worrying about messing up a nice knife, I can understand that to a degree. With factories churning out inexpensive knives, the handmade knife is relegated often to a canvas for the artwork of the knifemaker. One does not typically decorate their campsite with a Dali painting, and one may not want to gut a deer with a gold and blacklip mother-of-pearl handled Samuel Bell-style dirk.

There is, however, a middle ground. Plenty of knifemakers make working knives that are aesthetically more beautiful, ergonomically more comfortable, and functionally not even in the same league as the average factory-made knife. Their prices may run somewhat higher than the cheap knives, but often they are on par with or cheaper than quality factory-made knives.

All businesses are in the job of making money. Rarely will you find a business of any sort that does not seek a way of cutting costs. Think of this, though: who has a higher chance of cutting cost by cutting quality, a large factory with a customer base that is looking harder at price than any other factor, or a custom knifemaker whose every blade is indelibly linked with his name and personal reputation?

I'll continue this line of thought in a future post.
Posted by Helm Enterprises, Forging Division at 7:52 PM 3 comments: 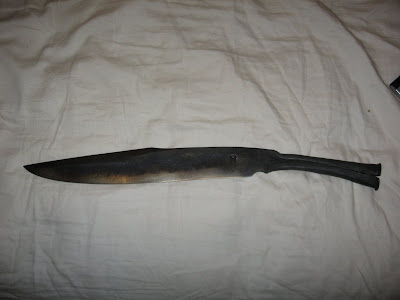 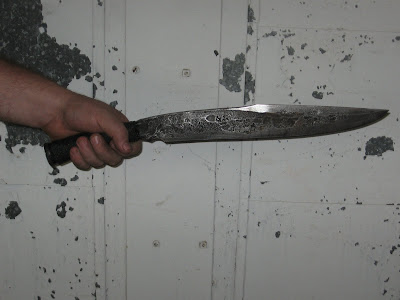 I have a new project I'm working on, another collaboration with Noah of Wasteland Leatherwork. This is the next phase of the Wasteland Crow Project.

There are actually two different phases of the Wasteland Crow Project that we're working on. More details will be forthcoming, but here is the current progress on the large knife.

This is a barong-style blade 13.5" long. The handle is an integral socket, which is an incredibly strong construction. The steel is leaf spring, with multiple quenches in vegetable oil, differnetianlly tempered, bevel and false edge filed by hand. There will be more done with the handle wrap, but it is currently wrapped in cotton cord sealed with clear shellac that has had a bottle of India ink mixed in.

The shape of the blade, weight distribution, and angle in relation to the handle all combine for a strong chopping power. In spite of not yet being sharpened, I chopped through a good-sized chunk of elm, as you can see in the picture.
Posted by Helm Enterprises, Forging Division at 7:41 PM 3 comments: