This one walked out of my shop today in the hands of an airman. I had not made a sheath yet and didn't have any pics, so I built a quick foldover Kydex sheath while he waited and snapped some pictures.

The blade is just under 5" long, forged from 3/4" round 5160 spring steel. Triple normalized, triple hardened in canola oil, triple tempered, shaving sharp; the usual. The tang runs the full length of the handle and is wrapped in paracord with a black underlay and desert tan overlay. The paracord is impregnated with Minwax Wood Hardener, essentially making a composite material in situ, and anchors through a hole drilled in the end of the tang. The underlay still has its core, while the overlay and the single-strand Turk's head knot have had the core stripped. 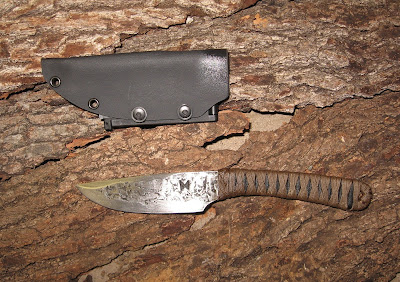 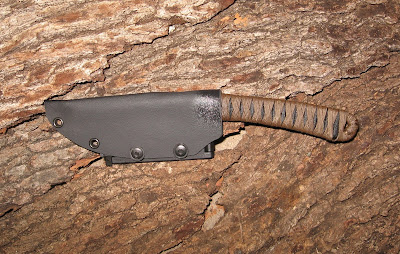 The sheath has a small MOLLE lock. The shiny spot on it is where I got it a smidge too warm with the heat gun.
Posted by Helm Enterprises, Forging Division at 10:19 PM 1 comment:

First exposure of my work in a magazine

Not an article, but the April issue of Blade has a letter to the editor from me thanking them for their timely article in last June's issue about the Bowies at the Alamo. One of the Bowies pictured was the Caiaphas Ham Bowie on display in the Alamo's Long Barracks, which I had just been commissioned to make a reproduction of for a customer who wanted it not only for its historical value, but for the design's utility. As a bit of background, Ham was a friend of the Bowie brothers and was given the knife from Jim's brother Rezin, who was the knife nut of the family. From the caption on the display in the Long Barracks, it sounded to me like there's a good chance Rezin made the knife himself, though I don't remember what information there made me think that or know for sure that he did.

Although my shop is just a couple or so miles from the Alamo and I had studied and sketched the knife to the extent of my poor drawing ability, I wanted to get as close to the original profile as possible.

Armed with dimensions e-mailed to me by one of the head curators and the picture from the Blade article, I got as close to the original profile as I could. The original was forged from an old file, but this one was 5160. I used mesquite for the handle, appropriate for a knife made in Texas. :) I even offset the rivets in the handle as near as I could figure to the original. 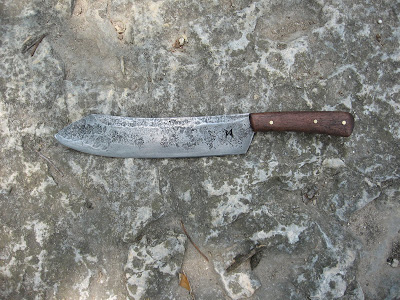 Like the original, it has a tapered tang and a pinched-in spine. 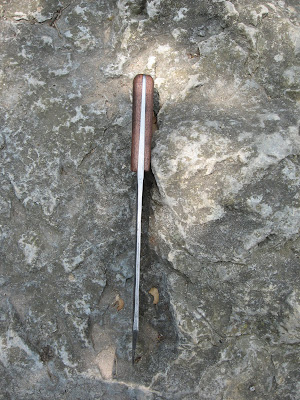 Fortunately, the customer had better sense than to try to reproduce the original sheath, which was quite crude and seemed to be held together with *lead rivets*! Given the fact that my leatherworking skills would likely have made a sheath uglier than the original (I know where my skillsets lie, and it's not in the direction of leatherwork), the customer wisely commissioned knifemaker Luke Swenson, also living in the San Antonio area, to make a sheath for it. 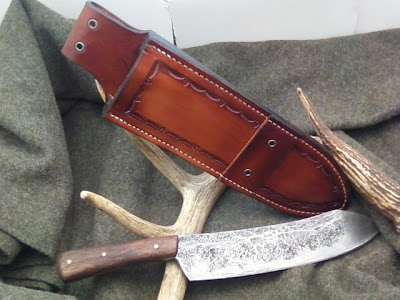 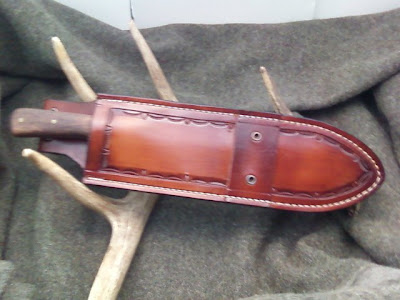 Since getting the knife, the customer has put it through its paces, from cutting grass to patch a shelter roof to cooking to near-daily use in making kindling for his wood stove. In his words, "IT HOLDS A PHENOMENAL EDGE". That's what one likes to hear about one's work. :D I like making good using tools for folks what use them.

The magazine has just hit the stores and I haven't picked up a copy for myself (and other copies for my family) yet, but I've seen the page. They have a large picture of the knife plastered across the top of the page where you can't miss it. :) I've already seen a small increase in visitors to my website specifically because of it.
Posted by Helm Enterprises, Forging Division at 11:06 PM 1 comment:

I forged this out last week while contemplating and assessing what I needed to prioritize as far as working on projects. Kept my hands occupied and my mind calm and I got done what I needed. Made a little bit of money with it too, as it has sold. 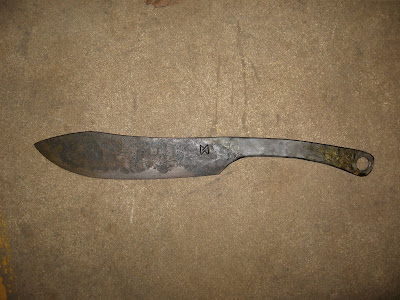 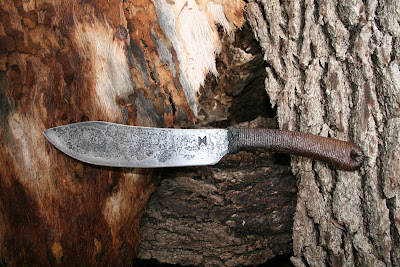 Typical for me: 5160, forge finish, filed bevels, triple normalize, triple quench in veggie oil, triple temper. This is the first forged blade for me to use this particular type of cord wrap; the others using it were stock removal blades. There's a leather slab on either side under the wrap that runs the full length of the handle and it has a hole in it so that the cord wraps through the steel and the leather. Cotton two-strand Turk's head knot at the front, hemp cord for the rest of the wrap, sealed in shellac.

I forgot to take measurements, but it's a large blade. I'd say in the 7 inch range. 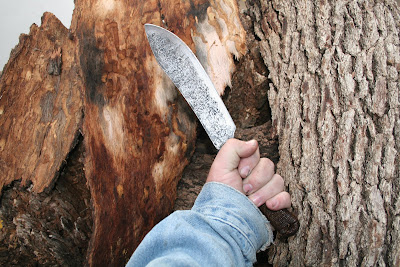 Posted by Helm Enterprises, Forging Division at 10:09 PM No comments:

The airman who ordered this knife completed his SERE training. With his permission, here's what he told me about using it:

"Ok, so im back from SERE school and it was rough. Learned alot though. My wife sent me the knife and out of the box i thought it was awsome. Sheath is very cool and functional. knife stays well with tension. The clips work very well on a web belt as well as MOLLE attachments on my vest. The knife itself is very beefy. I was not able to take pictures because alot of the training is classified and i was not able to bring a camera. I can say that the knife worked like a dream. We had many tasks during the training that involved a good knife. They issued us all bolt knives but i chose to use yours even though i still had to lug around the bolt knife as well. cutting tree bows down was very easy. I probobly cut down about 150 bows for shelters and camo. We also cut down alot of tree bolts for fires. we used large branches to beat the knife through the the tree bolts to have smaller pieces and the knife went through like butter. finished way faster than the guys with the bolt knifes. probobly went through about 20 bolts of wood. the tip worked real well for breaking down wood too. I also used the kinfe to start fires with a metal match and cut down alot of brush while evading. The knife worked like a dream and i had alot of guys ask where i got it so your cards went to good homes. Im sure you will get a few calls. This knife is definately staying in my helmet bag when i fly. Great knife. email me with any specific questions you have. Im still telling alot of people about it. [b]Oh and the knife is still as sharp as it was when i got it in the mail.[/b] Thanks again. "

I had to look up that a "bolt knife" is the USAF-issued survival knife, named that for it's bolt head-shaped pommel. I also hadn't heard the term "tree bolt", but he sent some pictures to show me. 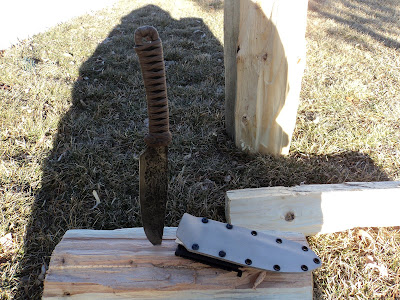 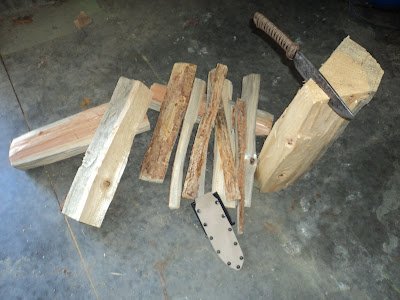 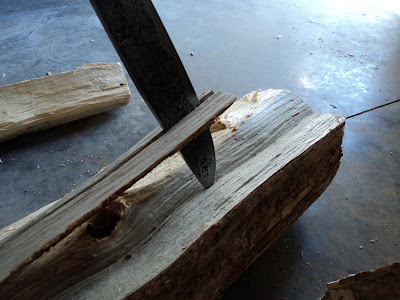 Folks, I was surprised to see his comment about the blade being as sharp as when he got it after putting it through the kind of work he described. I was hoping it would serve him well, but this is by far the hardest use one of my little blades has seen and it performed better than I had expected. That's why I made that part bold. :D I'm pretty proud to have made a blade that would do that well.

I asked him about how the handle had been both in comfort and in durability. His response: "I really liked the handle wrap as well. It fit good in my hand even when i wore gloves. It was very cold so we wore nomex flight gloves as well as calf skin leather gloves. Very good grip. also the sheath worked very well and was very quiet with the knife in as well which was good because we had to do alot of evading."

A couple of pics he sent of it on his bag: 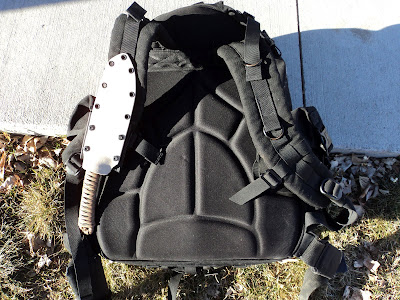 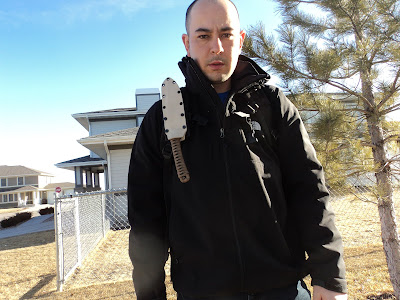 This is not the last primal/tactical knife I will be making. I have four in the works for active-duty military and hope to have more serving our armed forces in the future.
Posted by Helm Enterprises, Forging Division at 10:21 PM 1 comment: