This pair was ordered up by a customer who had previously bought an 18" Wrecker tomahawk from me and has used it quite a bit.  He wanted a matching 'hawk and knife with cord wrapped handles.

The 'hawk is the more "neo" of the pair, a 15" War Chief in 1/4" 4140, with the top and bottom rivet holes left exposed to allow for lanyard options.  The knife is forged from 1/4" x 1 1/4" 80CrV2, with a 7" blade and a false edge on the clip.  Both have hemp-over-leather handle wraps and black oxide finish on the steel.  There is a leather slab on either side of the tang underneath the hemp to bulk up the handle.  The edges on the leather were heavily beveled prior to wrapping to keep the corners of the handle from being too square.  Three strand Turk's head knots in black round leather lace cover the ends of the wrap, and the whole wrap is impregnated with marine epoxy.  The customer will be making his own sheaths. 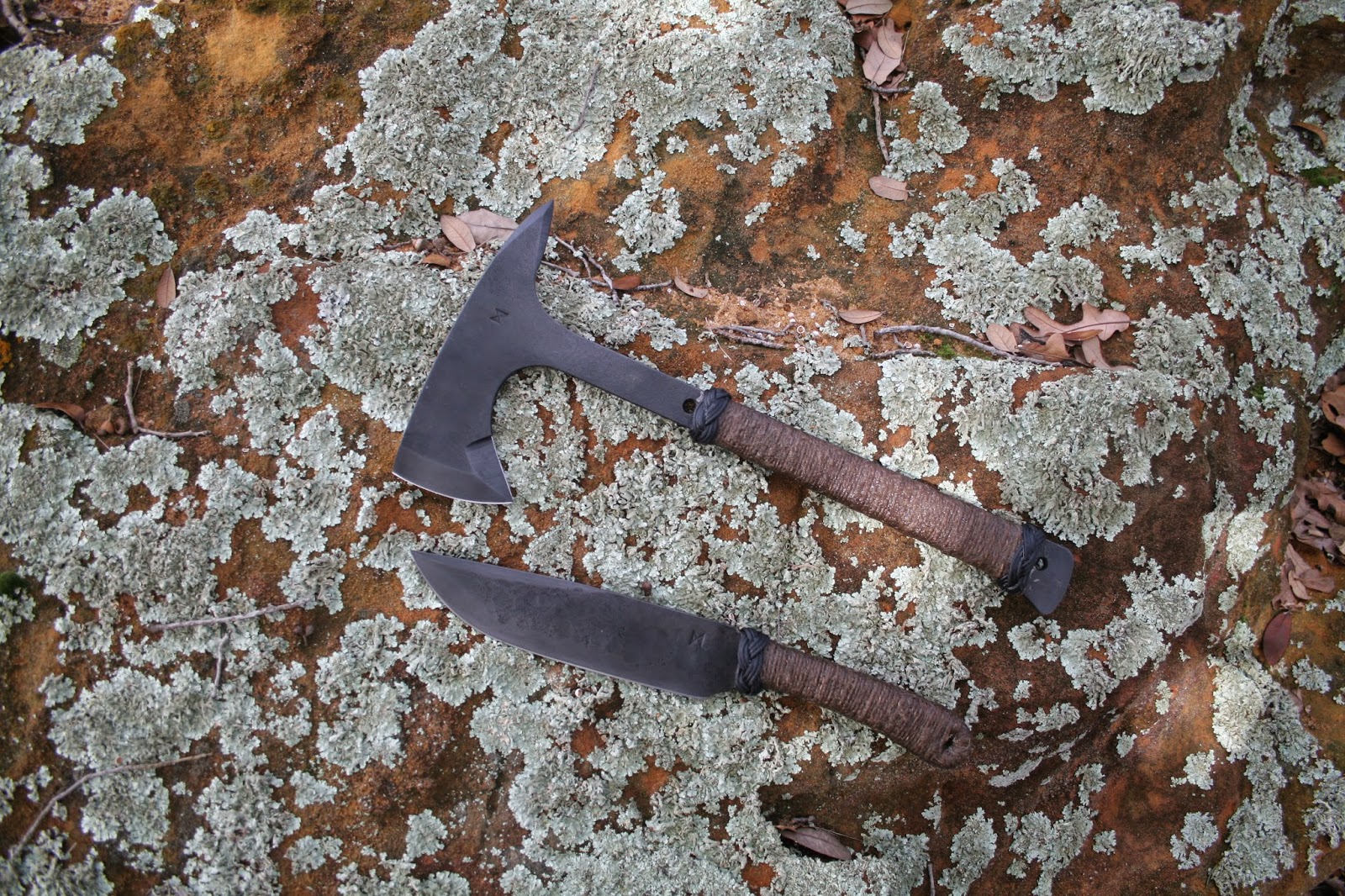 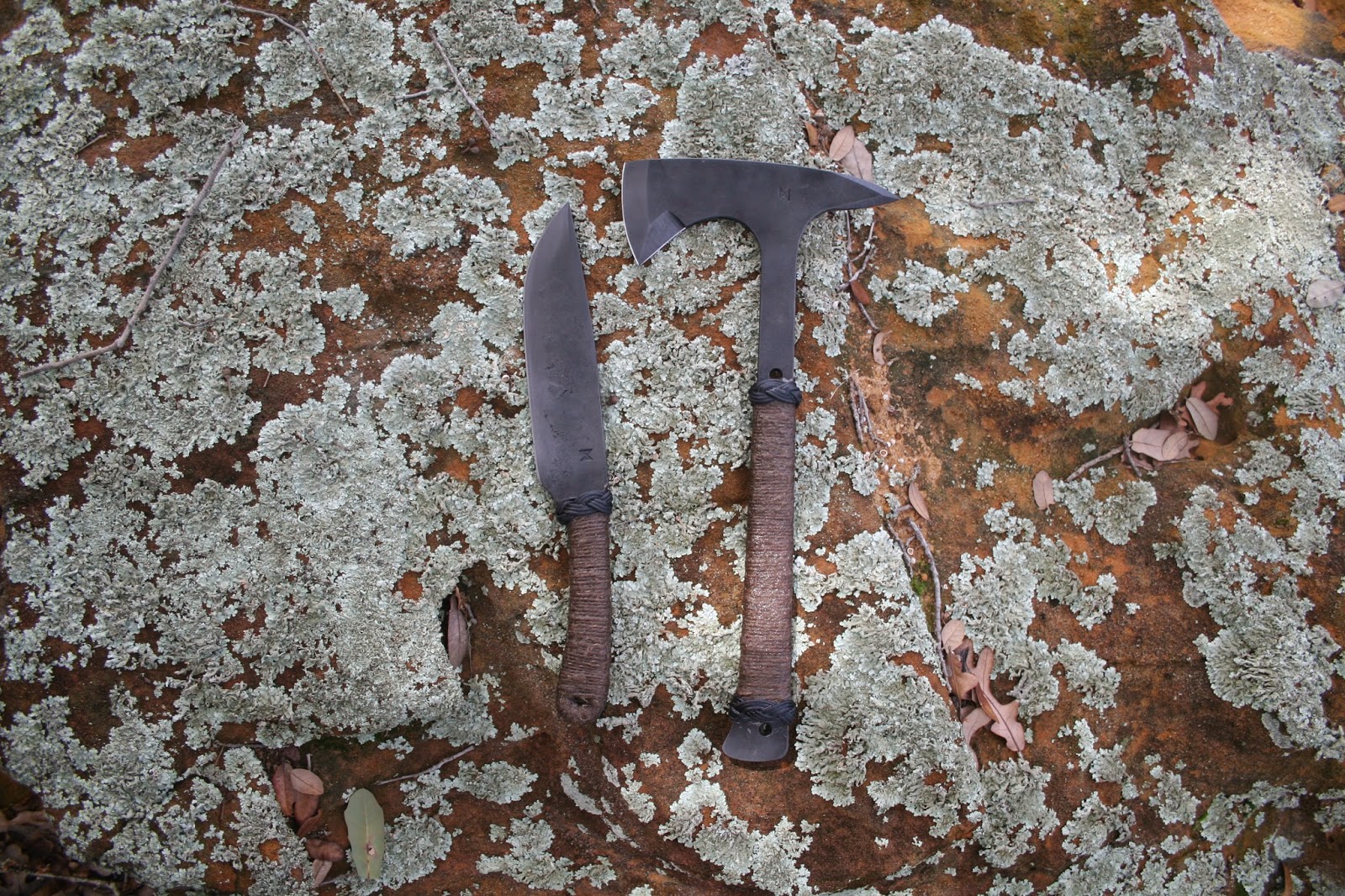 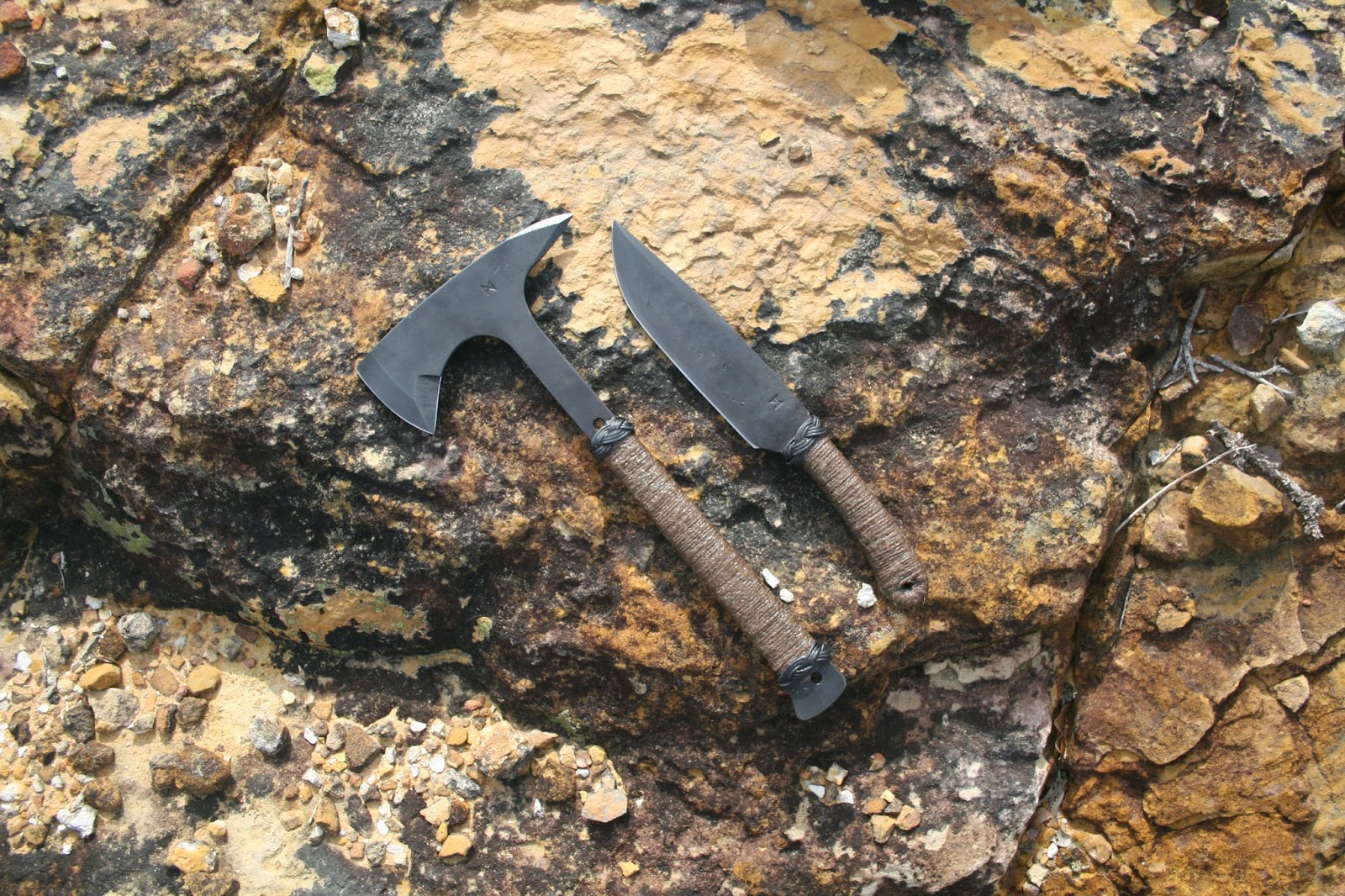 Variations on a theme

A small batch of Benghazi Warfighters.  All of them are forged from 1/4" 80CrV2 steel.

First one is pretty standard fare for me, with tan canvas Micarta and Kydex. 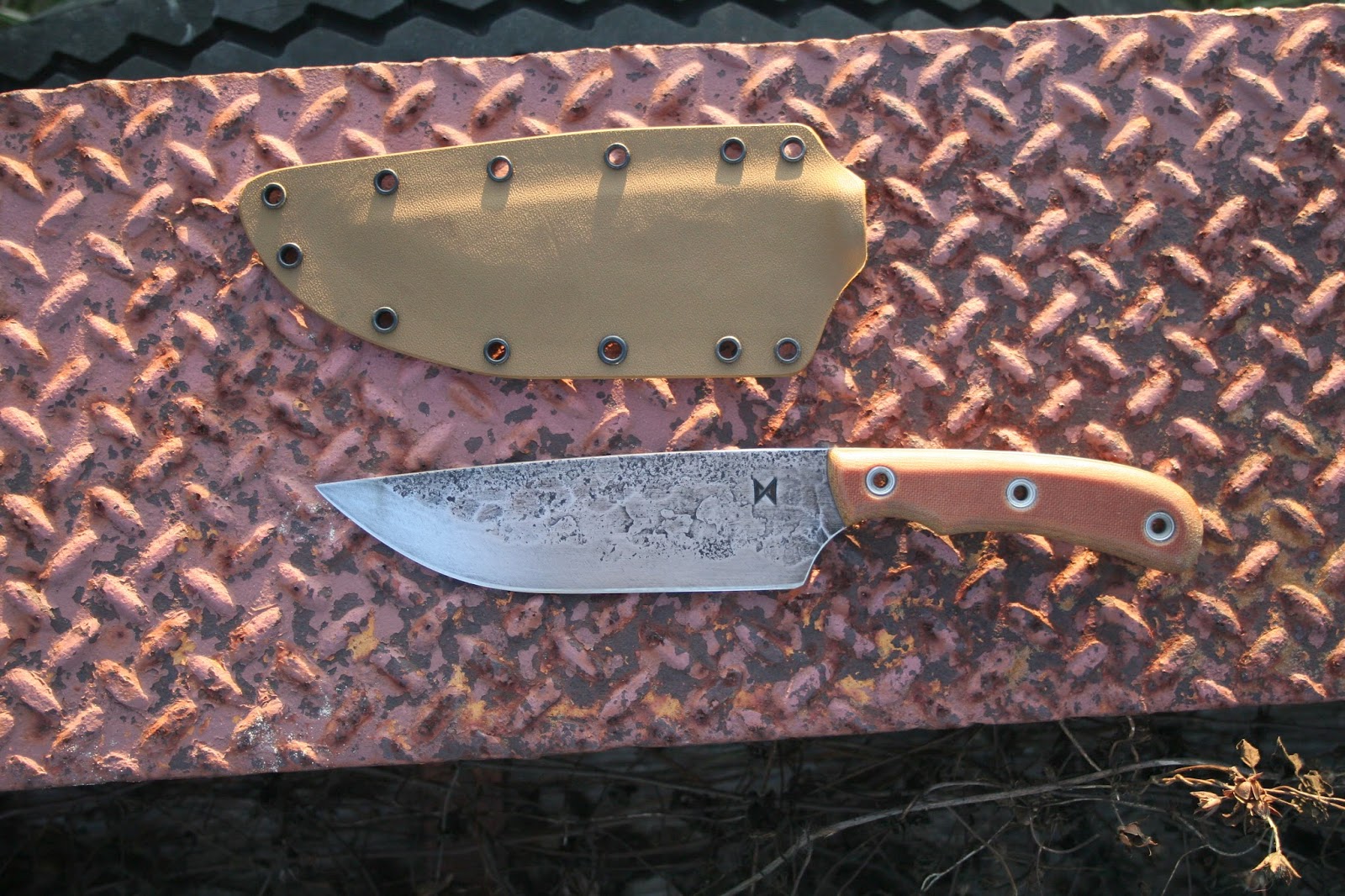 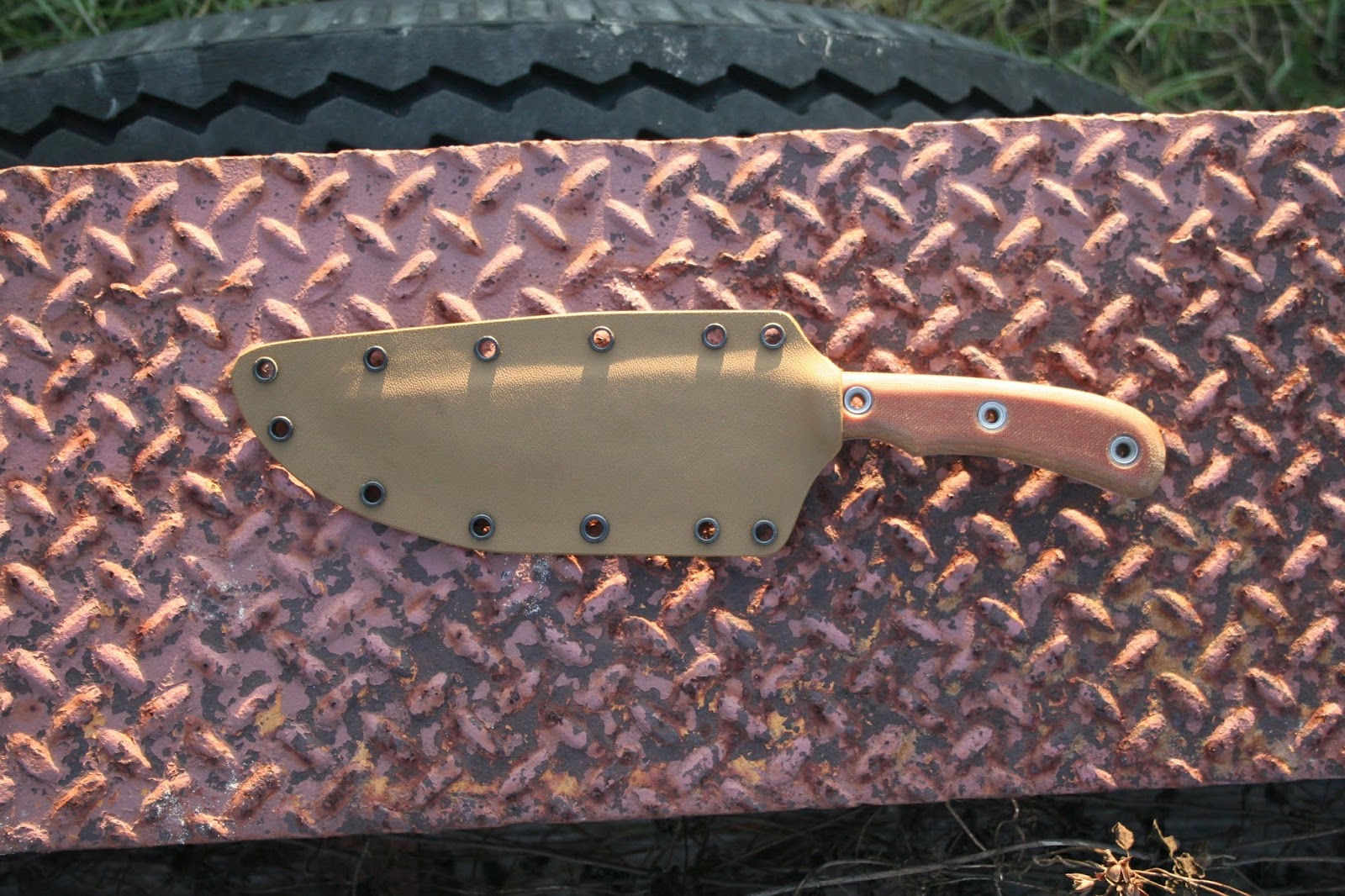 One with tan TeroTuf and a black oxide finish. 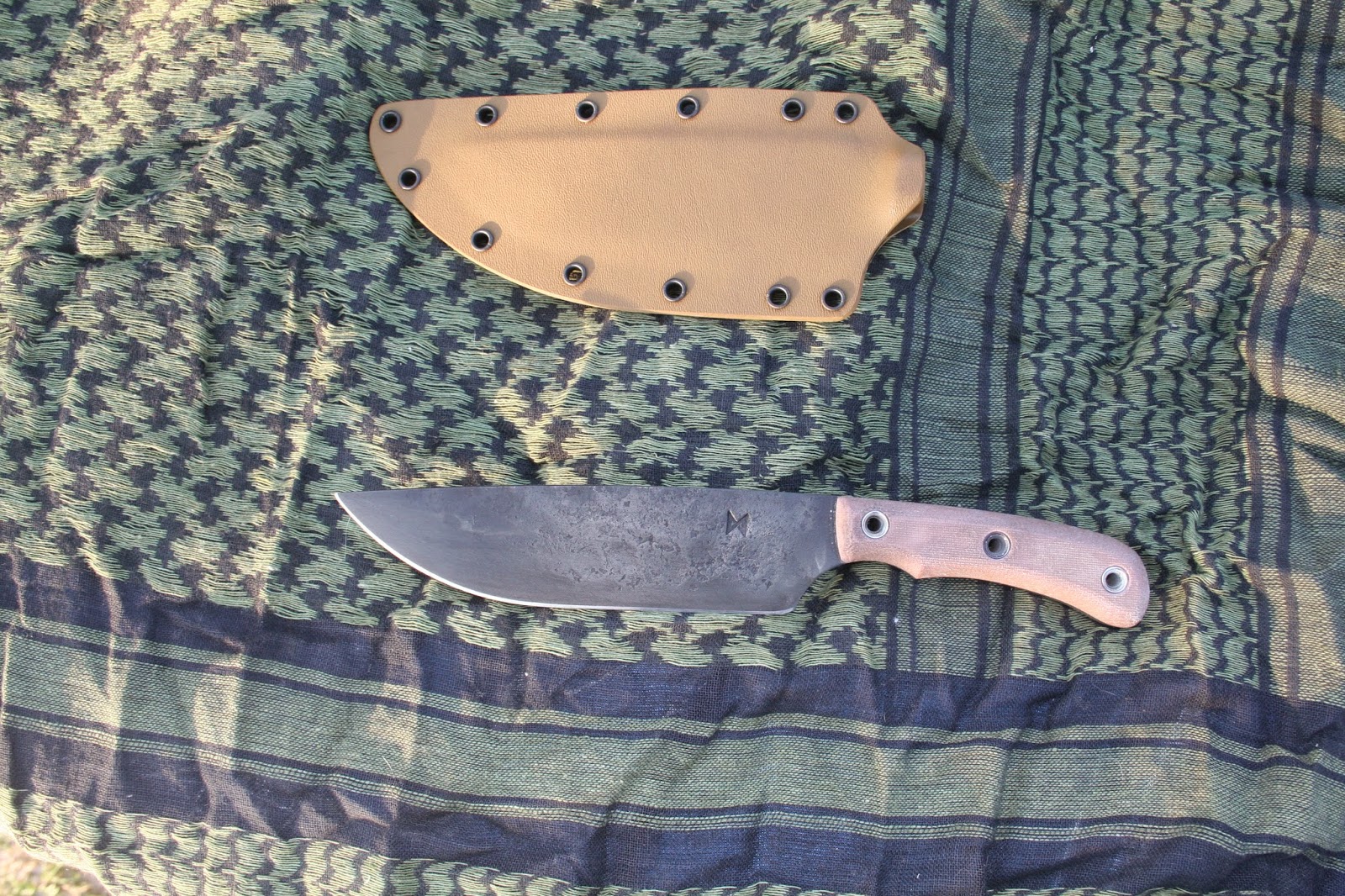 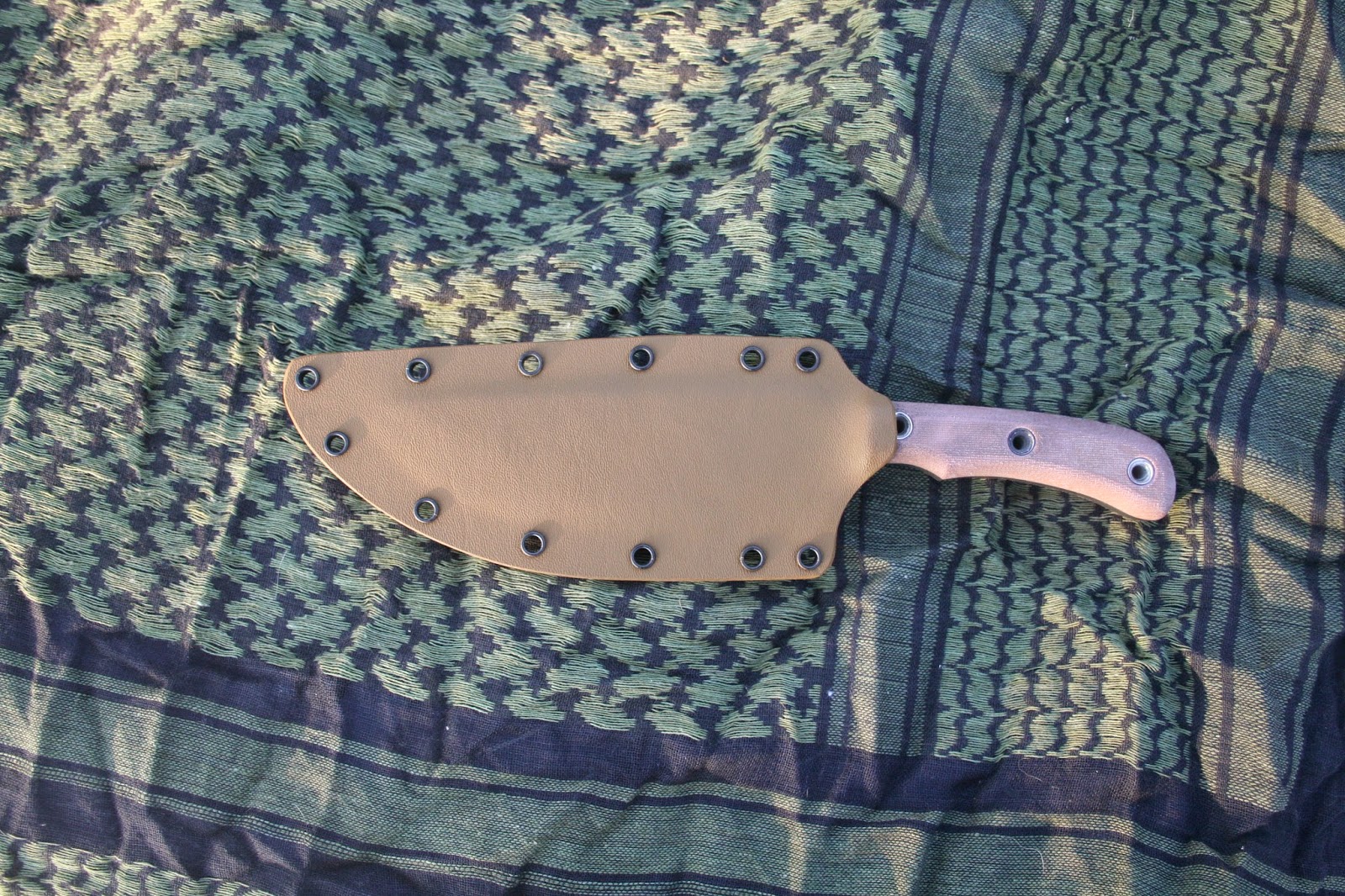 Another in tan Micarta. 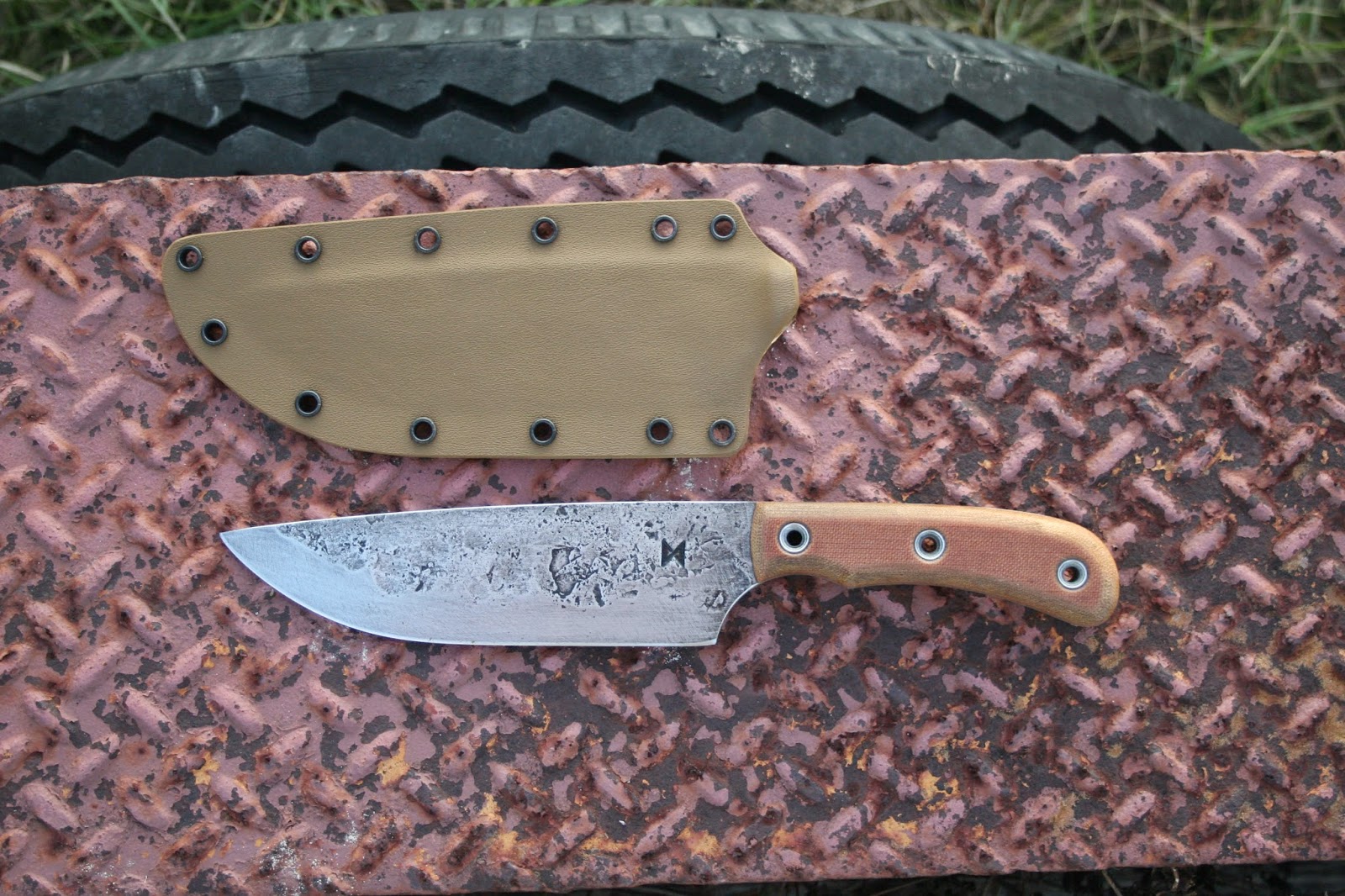 And a shorty double-edged version built for a Border Patrol agent, with olive drab canvas Micarta. 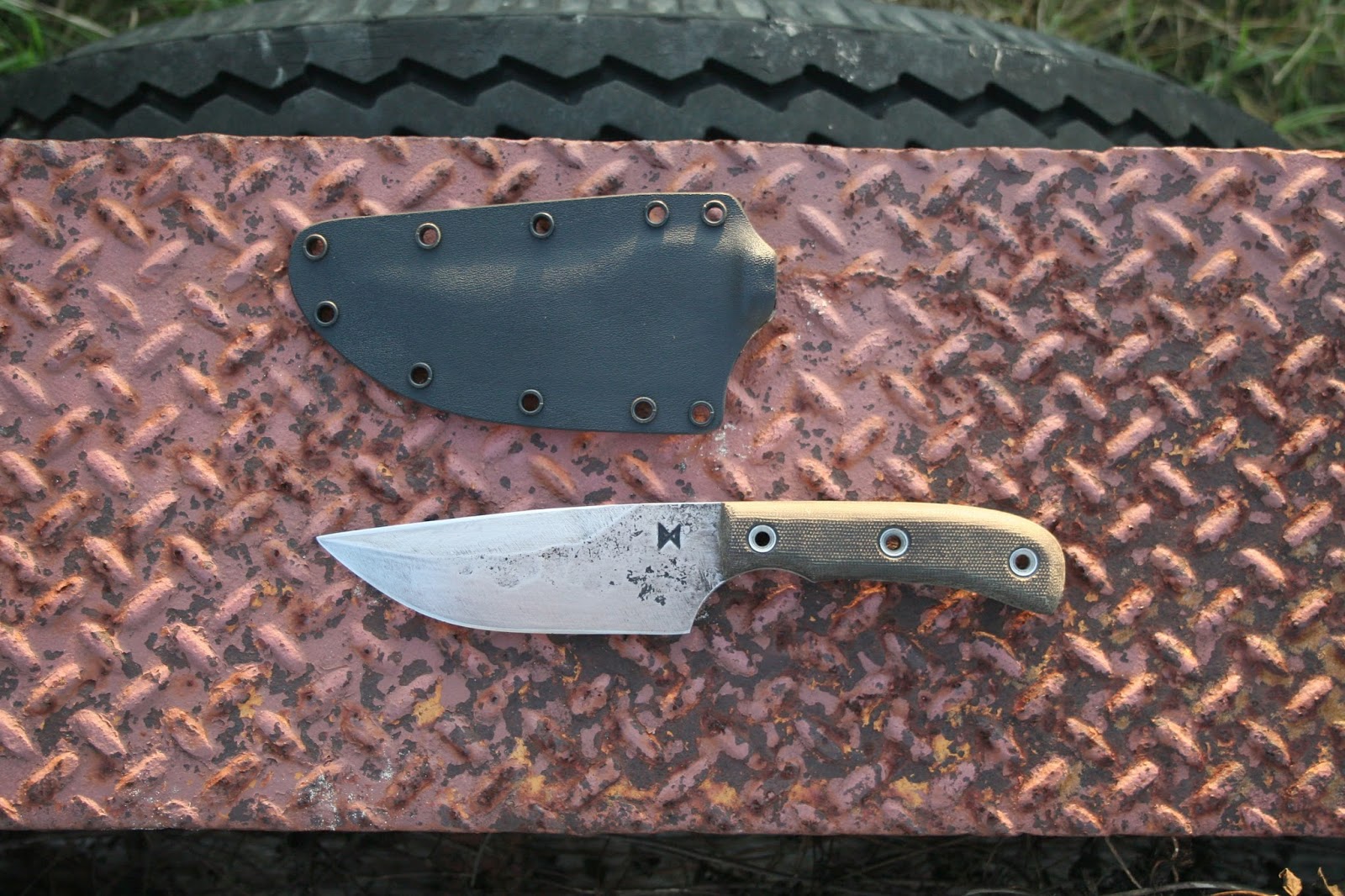 The difference in balance between a regular ~ 6 1/2" single edged Benghazi Warfighter and a ~ 5" double edged is interesting.  Usually they are slightly blade-heavy, making them chop decently for such a short knife.  The angle of the shot makes it look a bit further forward, but it's balancing just in front of the handle slab. 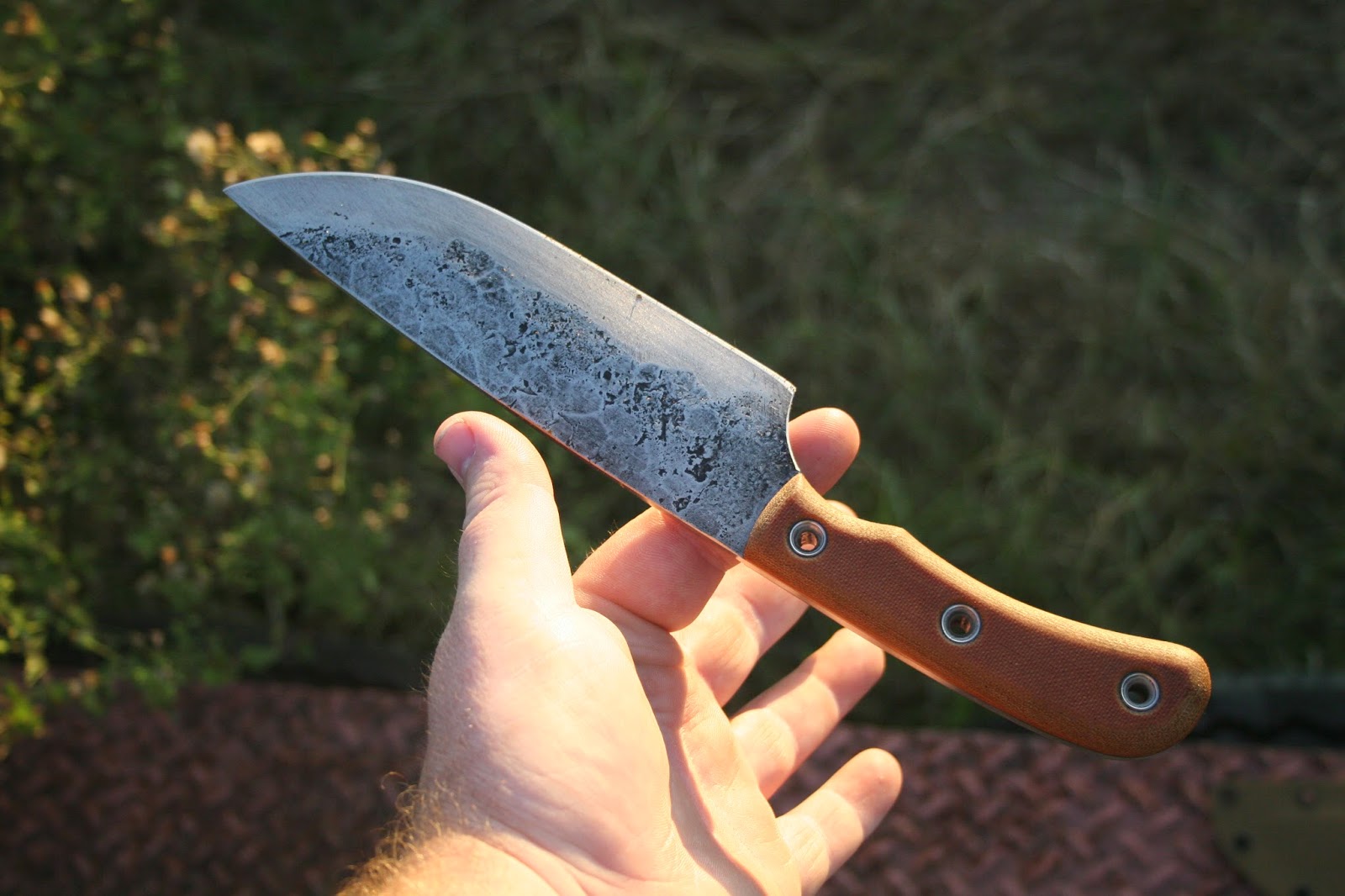 With the shorty, the balance point was right under the first of the handle rivets, making it feel very fast. 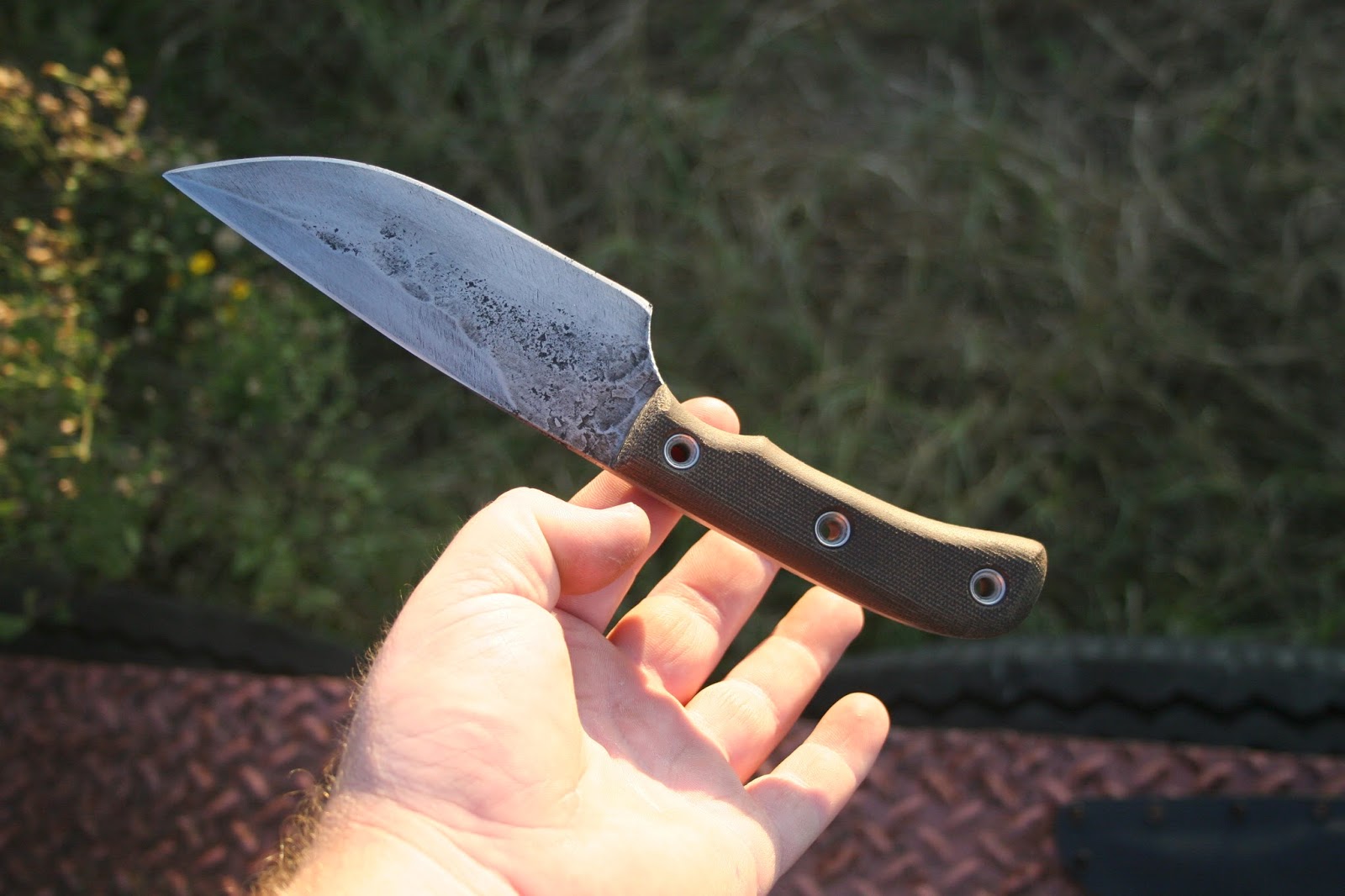 Posted by Helm Enterprises, Forging Division at 8:40 AM 3 comments:

Jungle chopper for the Texas jungle

Those of y'all that don't think Texas can be a jungle should see the impenetrable masses of briars, mesquites, scrub oak, and wild rose that cover large portions of the state.

This commission was made at the same time as the customer ordered up a Benghazi Warfighter for himself and one for his brother.  He has been very patient waiting for the chopper to get finished up, and I waited until he could give me some feedback on its use before I posted pics. 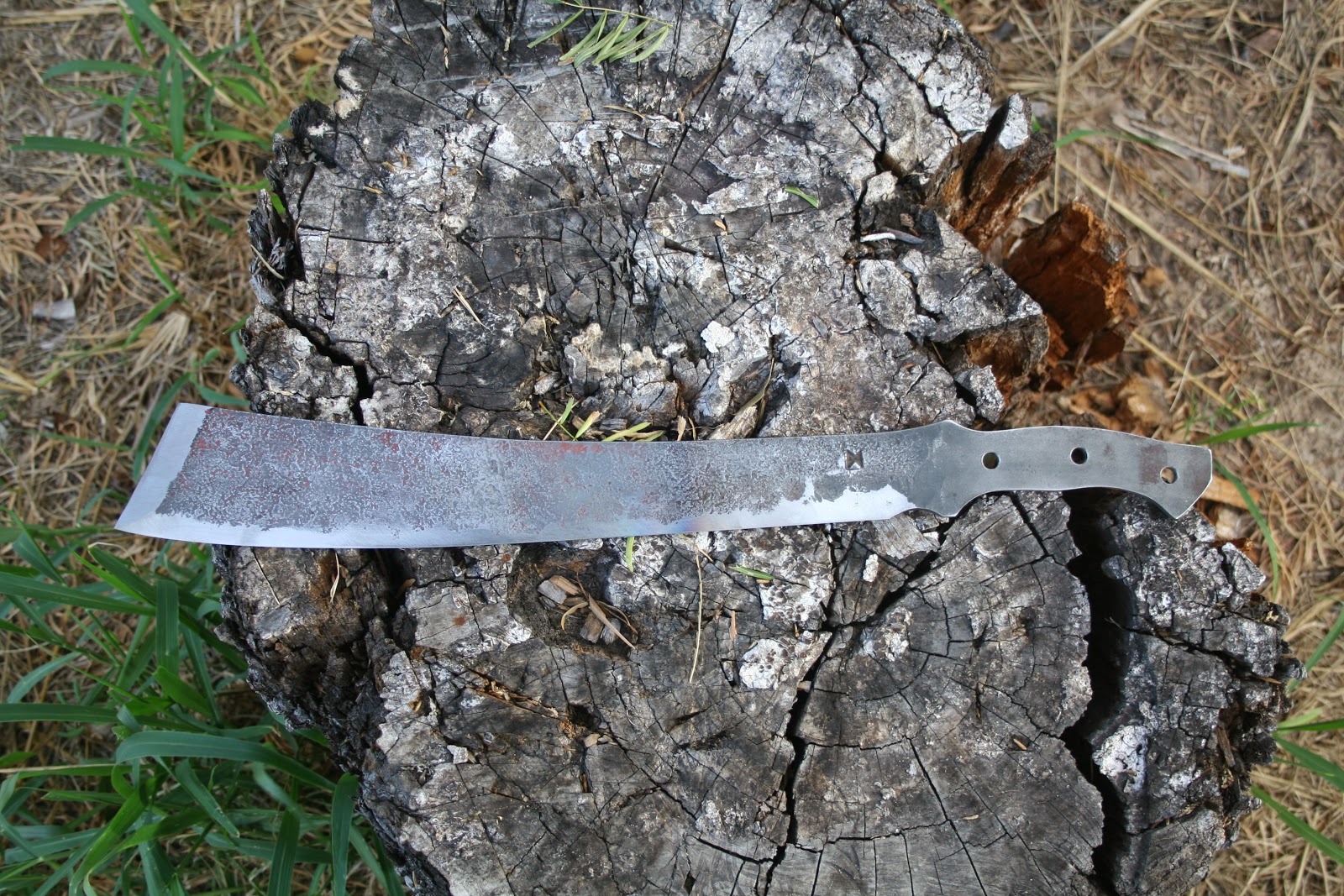 The blade is forged from 5160 steel, approximately 15 inches long, with a fully sharpened forward edge.  This is something I've done once or twice before, and is something I don't particularly want to do again.

The handle is black Micarta with flared stainless steel rivets.  This is the longest blade I have ever put a slab handle on; usually they are integral sockets.  I'm very pleased with the results.  He ordered a Kydex sheath from me. 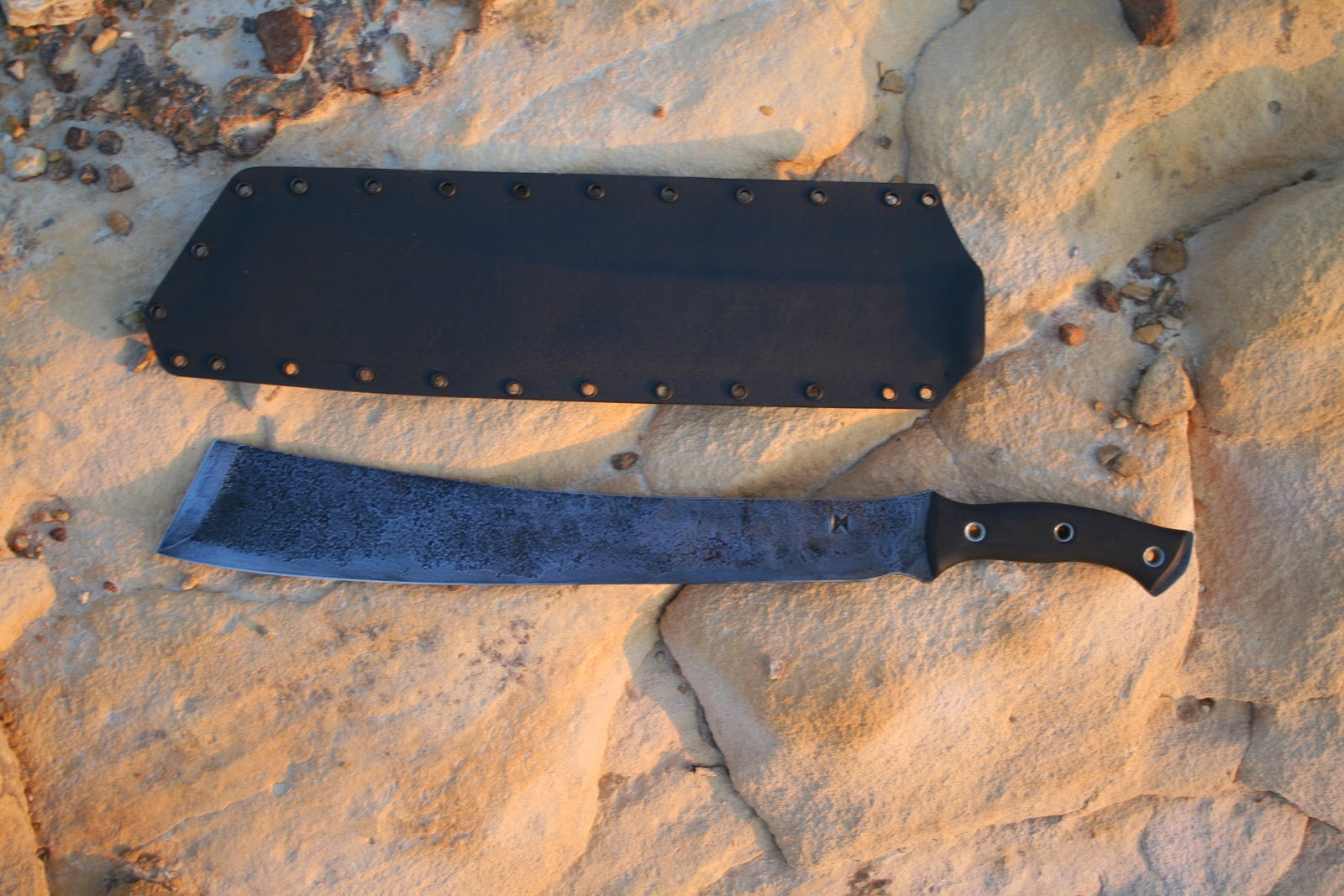 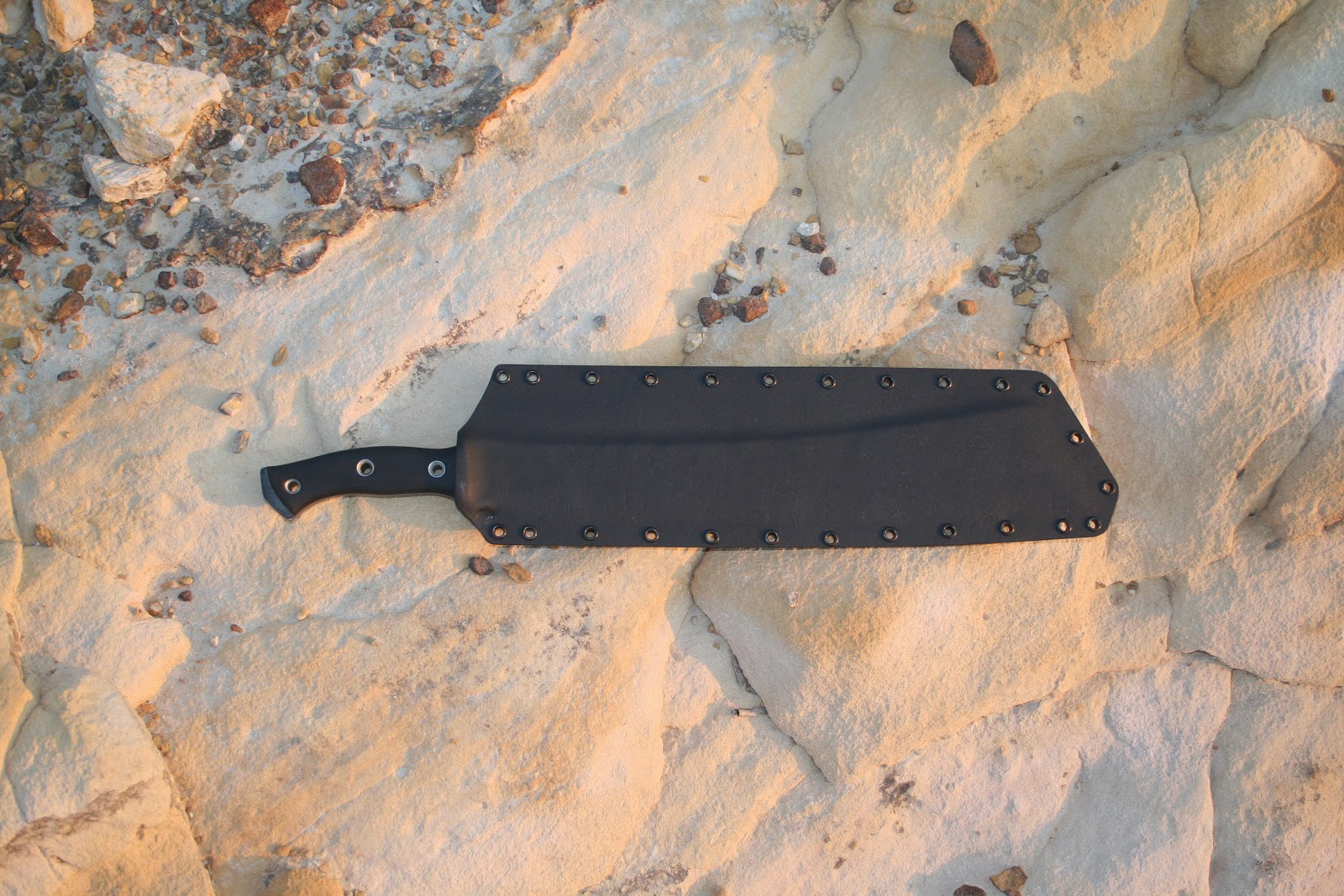 And a leather rig from Luke Swenson. 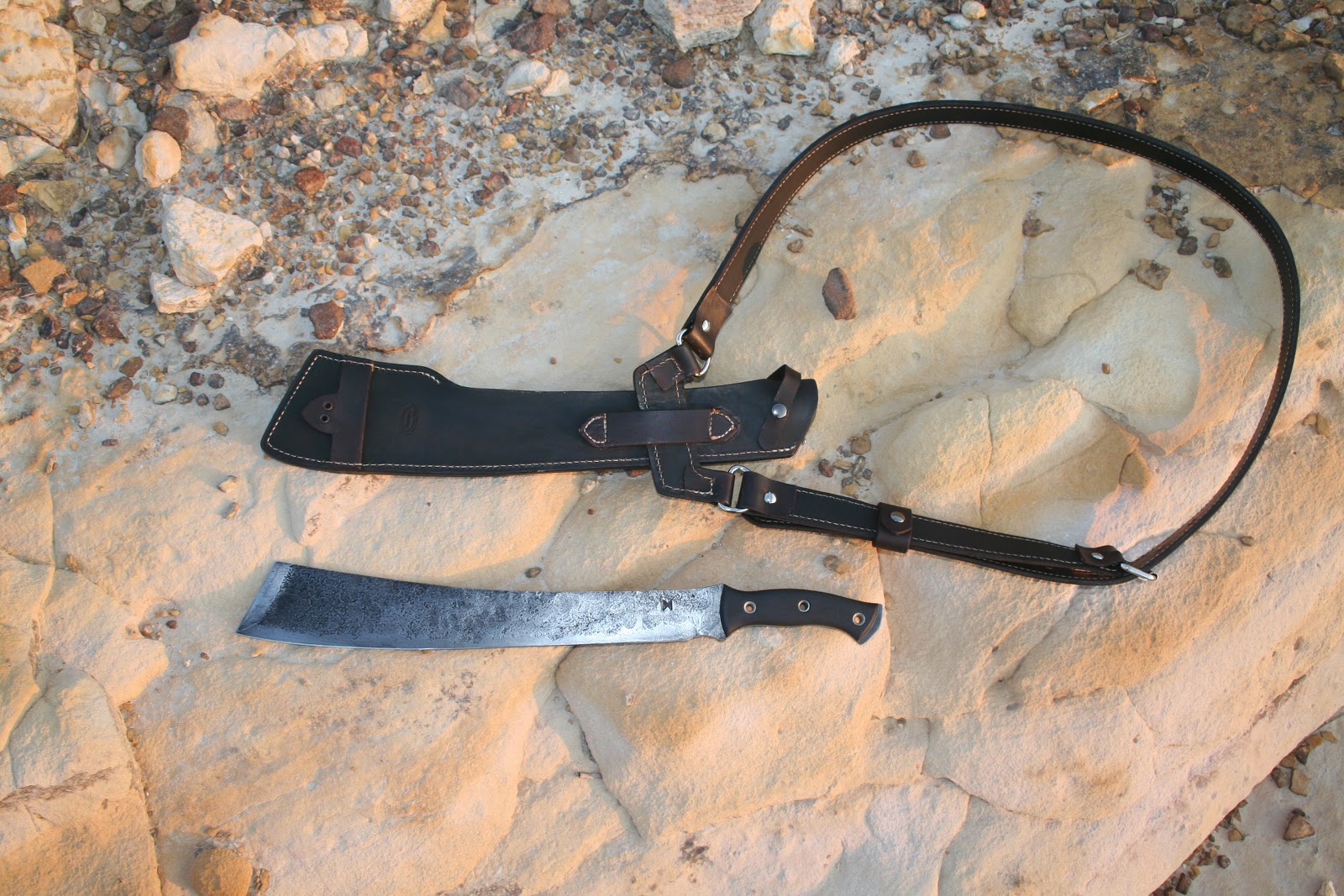 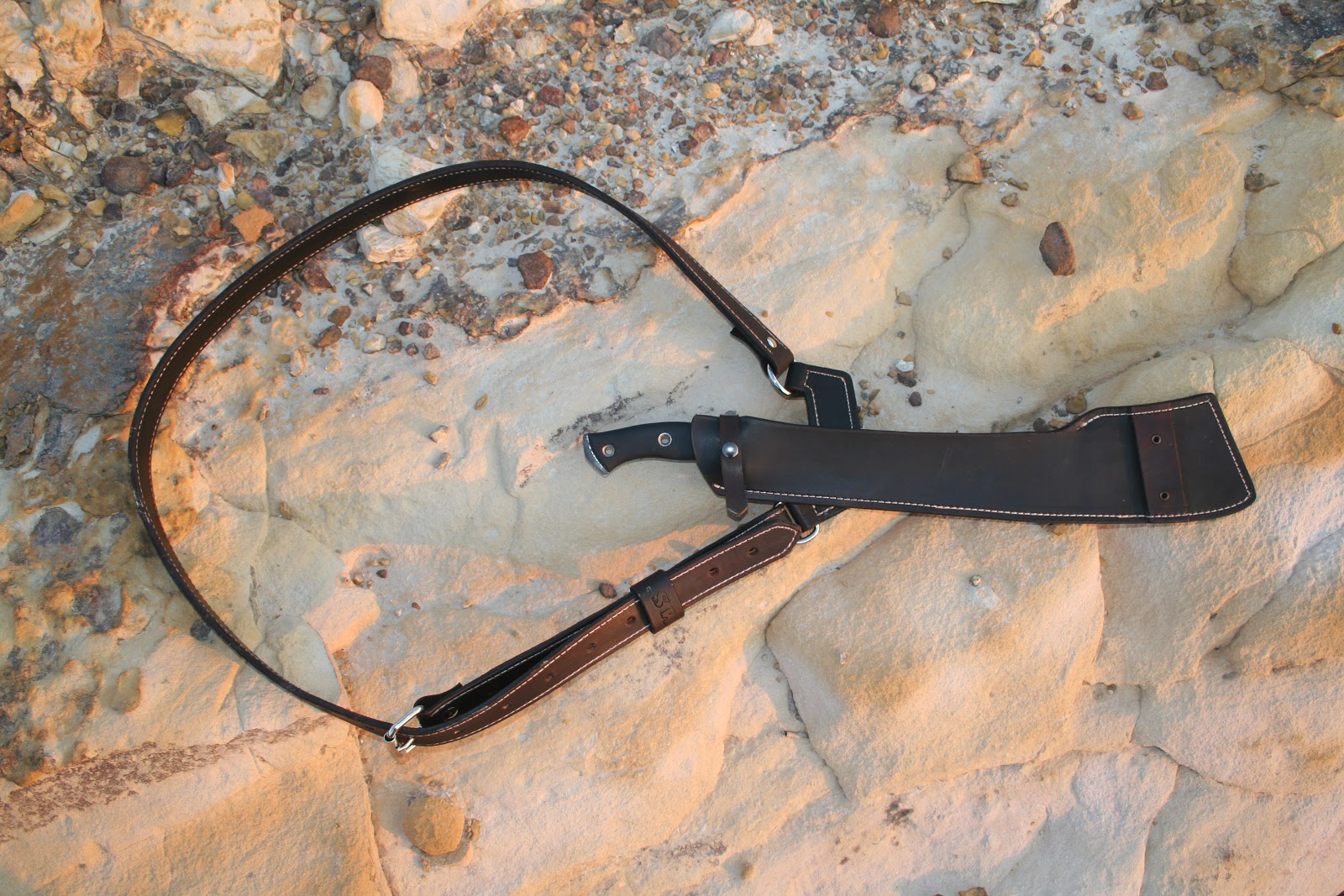 A closeup of the handle.  He wanted an exposed skullcrusher pommel. 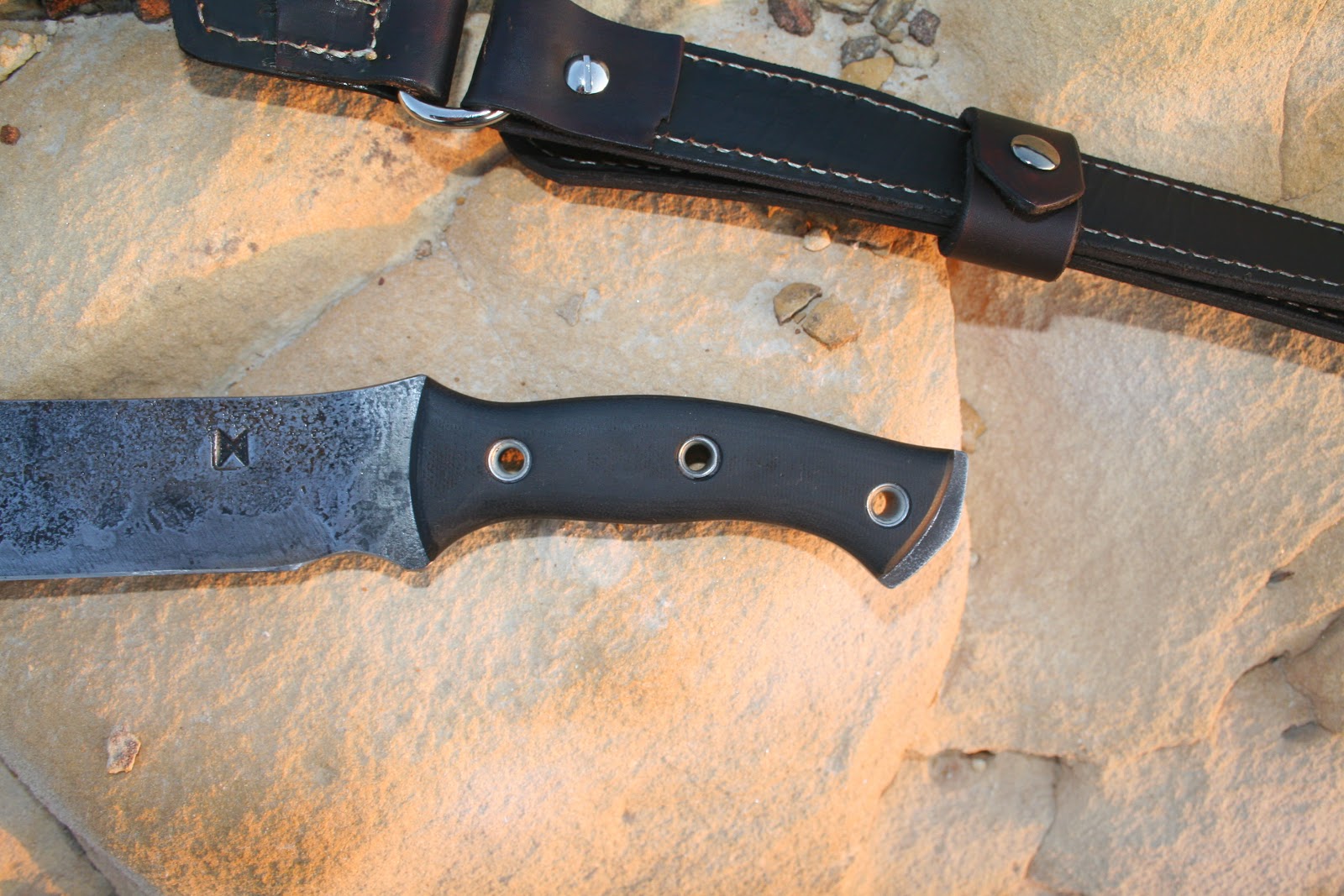 Here's his report back: "So I finally managed to string together some days off and take the Chopper for a spin, but didn’t bring my phone so I don’t have any pictures. I cut through several thigh sized limbs as well as some smaller stuff. It went through both the live branches as well as some old dead ones with minimal force behind the swing. It took a couple of minutes to get through the thick stuff with just lazy swings and probably half that when I put some force behind it. Only thing that gave away that it had been used was some gunk from the green tree limbs which was easily cleaned off. No touch up on the blade needed, it’s still shaving sharp.
The weight was perfect and the handle is very comfortable and the handle made it easy to keep my hand in place without slipping when swinging it. I loved every second of swinging it around. Thank you for such a well made proficient blade."
Always glad to hear about my blades being put to work.

Posted by Helm Enterprises, Forging Division at 12:04 PM No comments:

Several people have asked me about the blunt-ended chopper pictured with the sinuous bush sword a few posts back.  It got black paracord for its wrap. 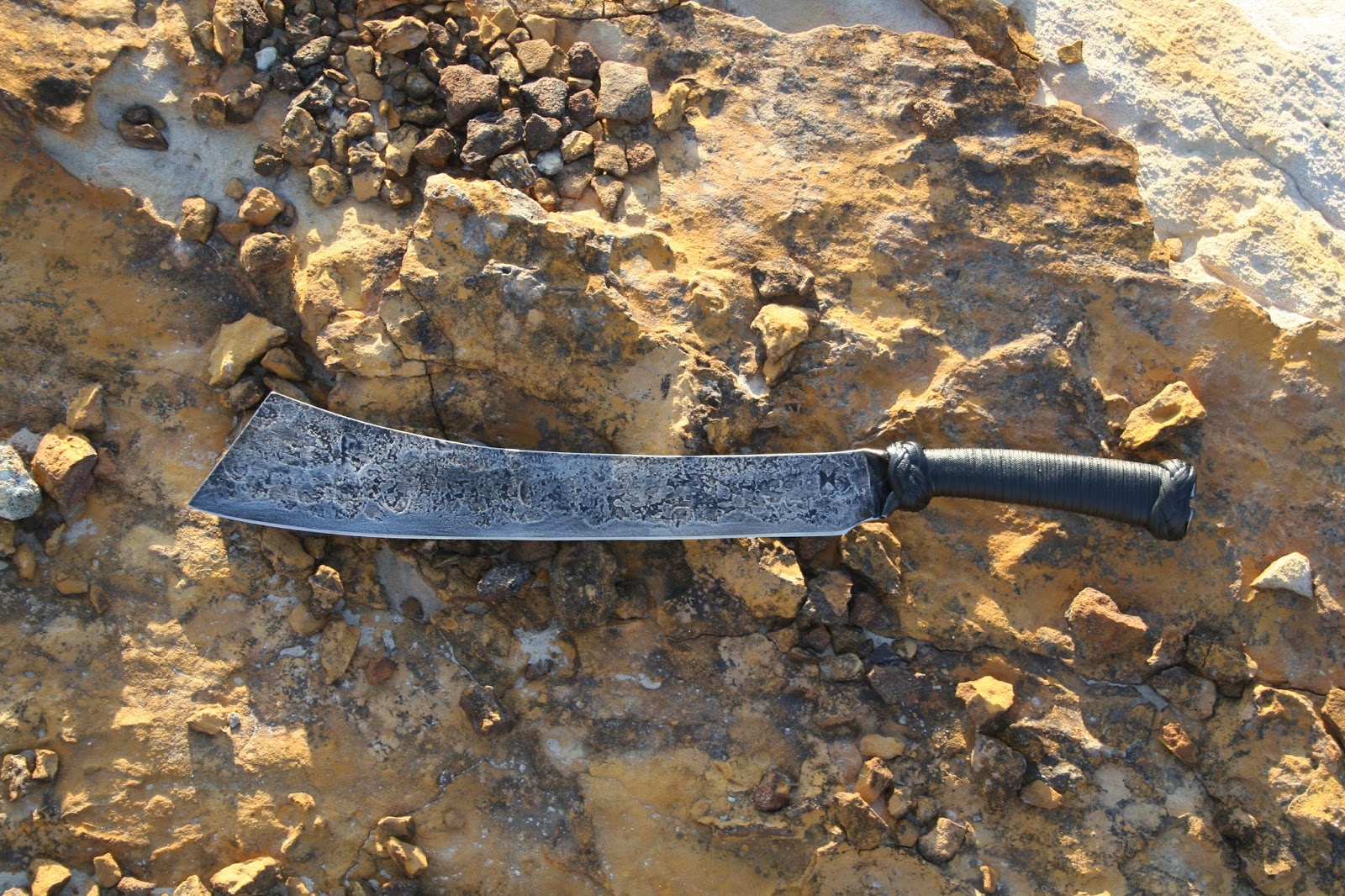 I had built this sword toward the end of summer to have on my table at the Gathering, with the intent of it going to my best friend (who has been waiting a very long time for a bush sword from me) if it didn't sell at the show.  Although it got picked up a lot at the show, no one walked home with it, so I built a sheath to go with it, sharpened the top edge, and delivered it to my buddy.

Here it was post-heat treatment: 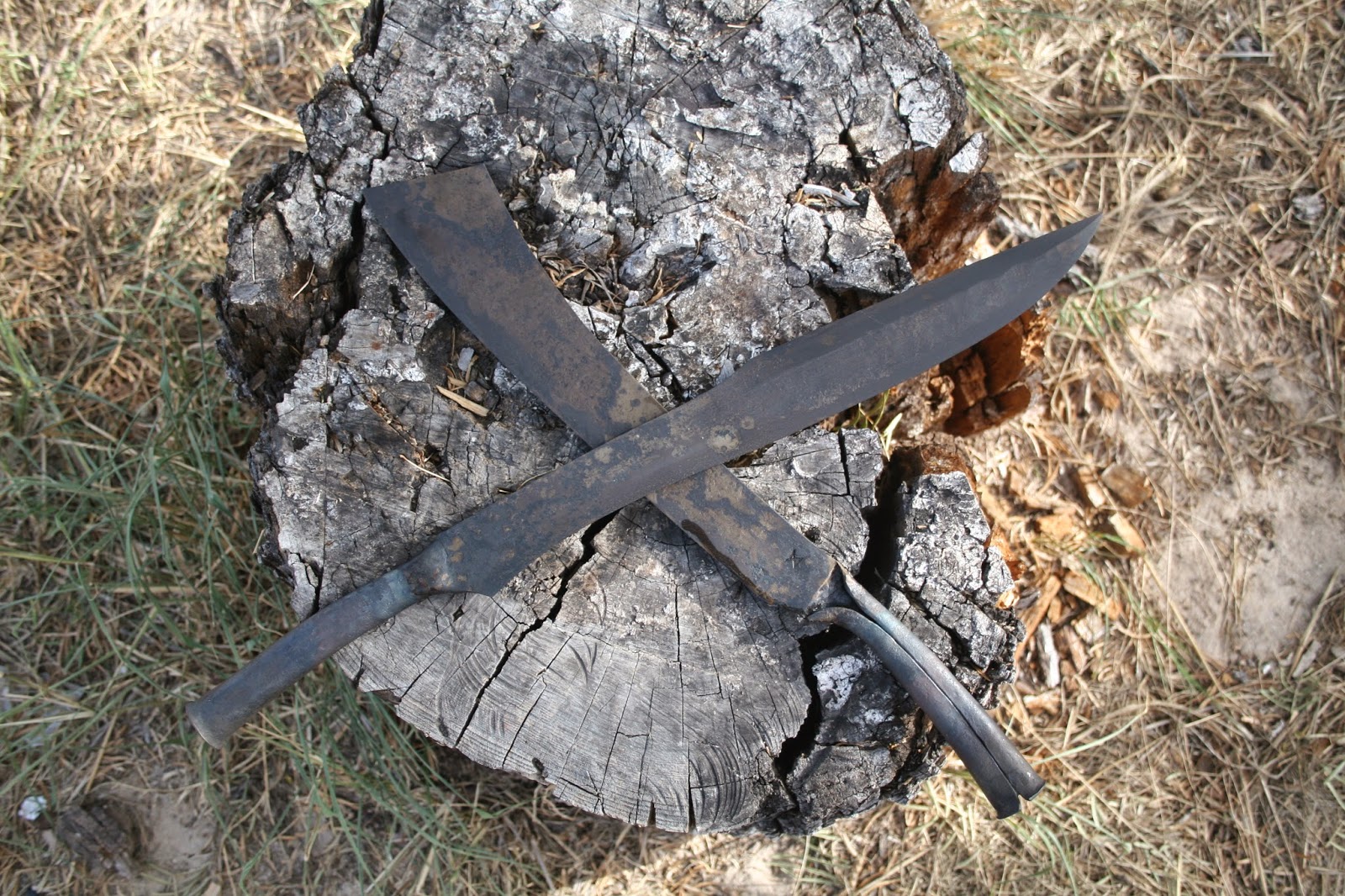 Ready for the show, top edge not yet sharpened. 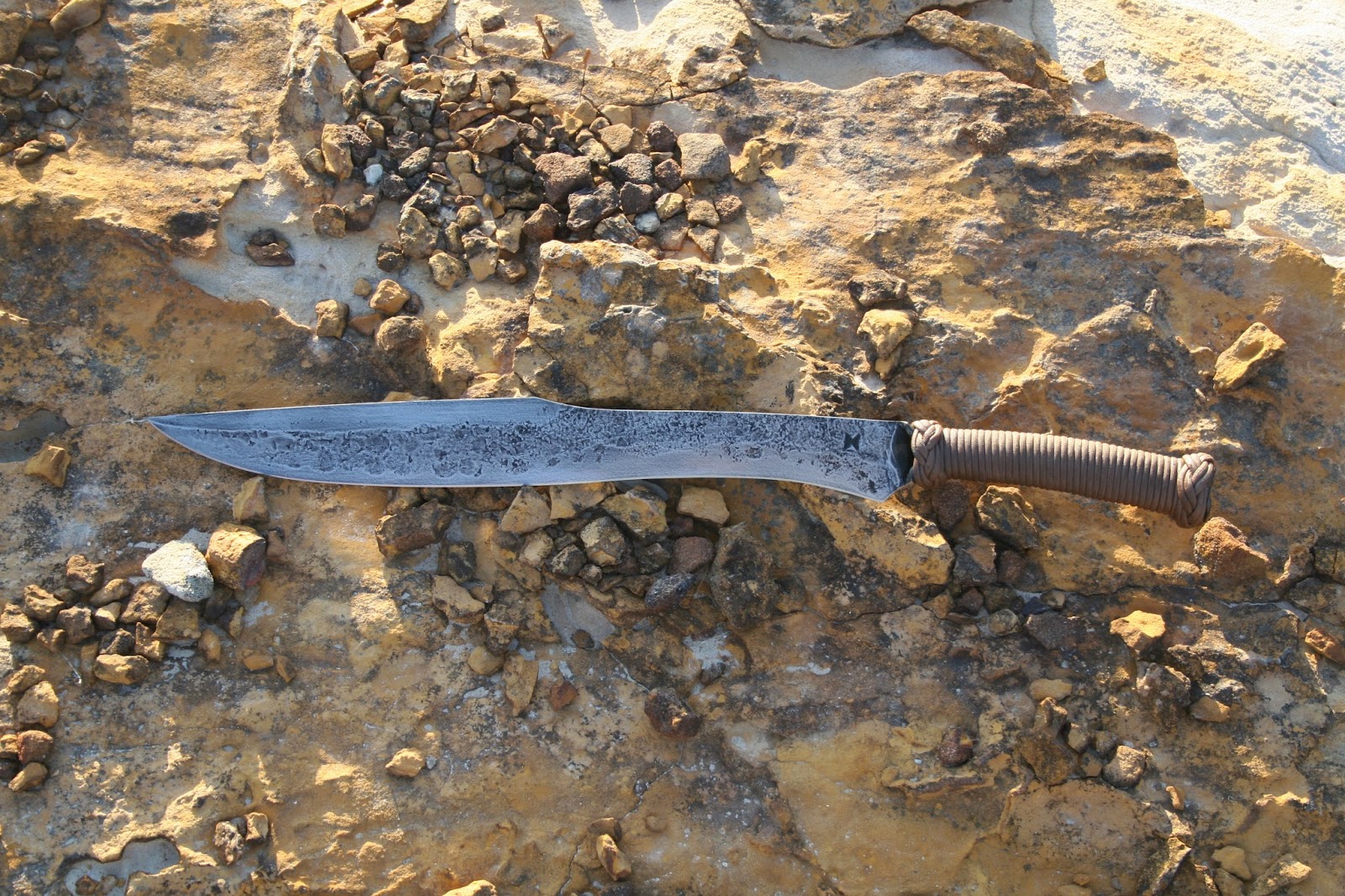 And then, when I got to hand it to my buddy and get some final pics, it was, as usual, at the end of us working a long day on my family's farm, and lighting was less-than-ideal to capture it. 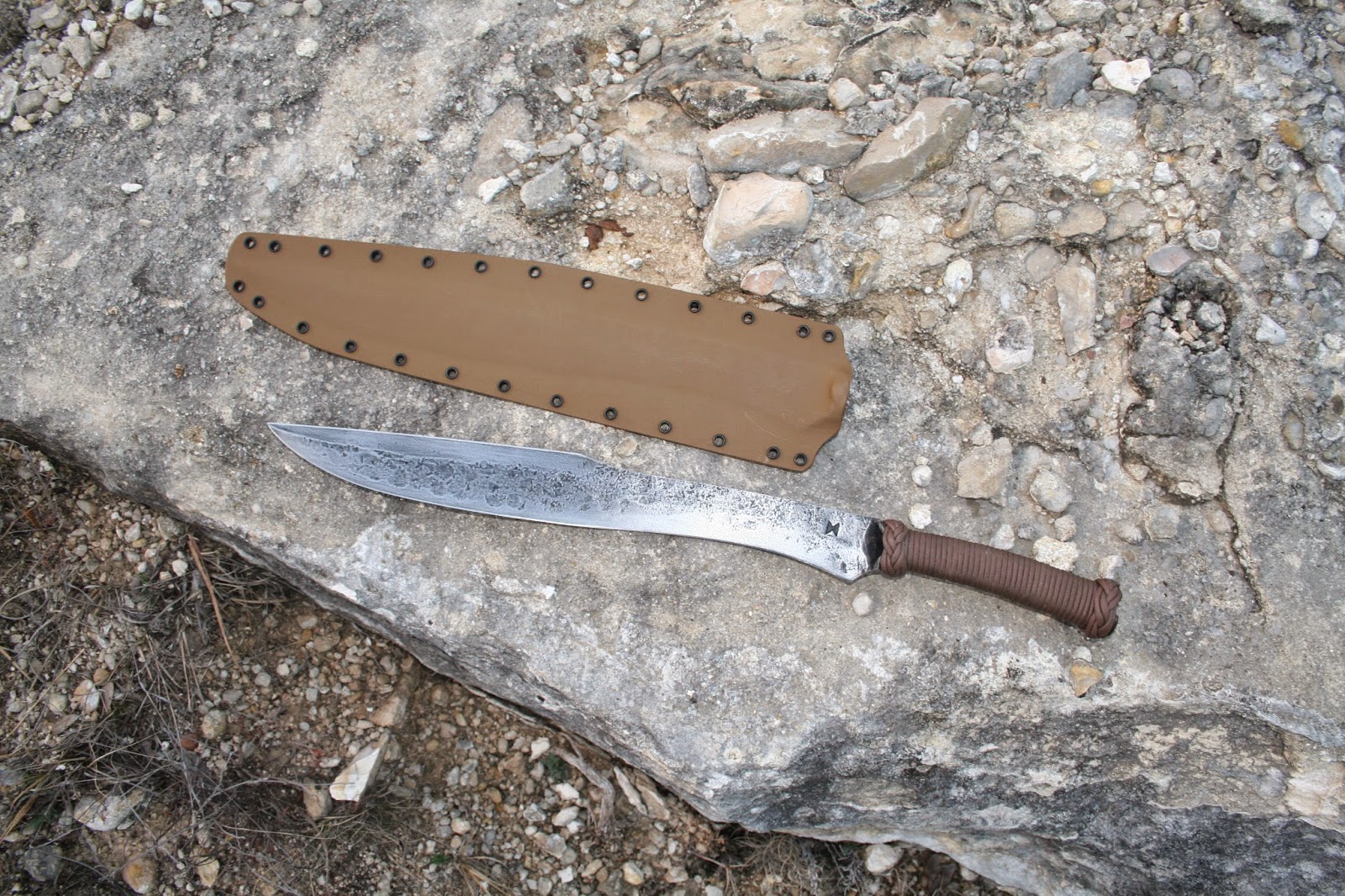 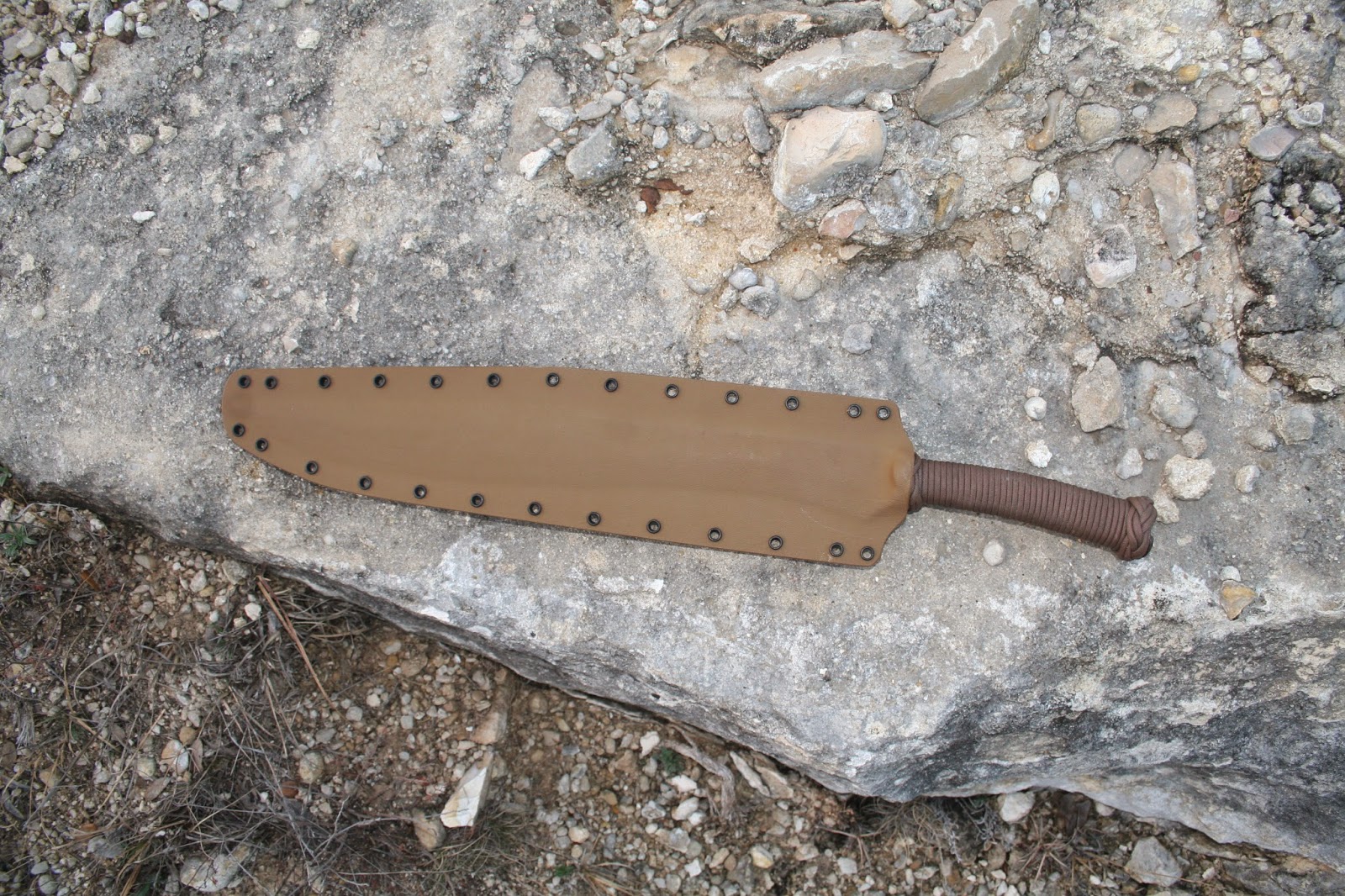 And my buddy, in appropriately dramatic pose with his new blade.  He's quite happy with it.  :) 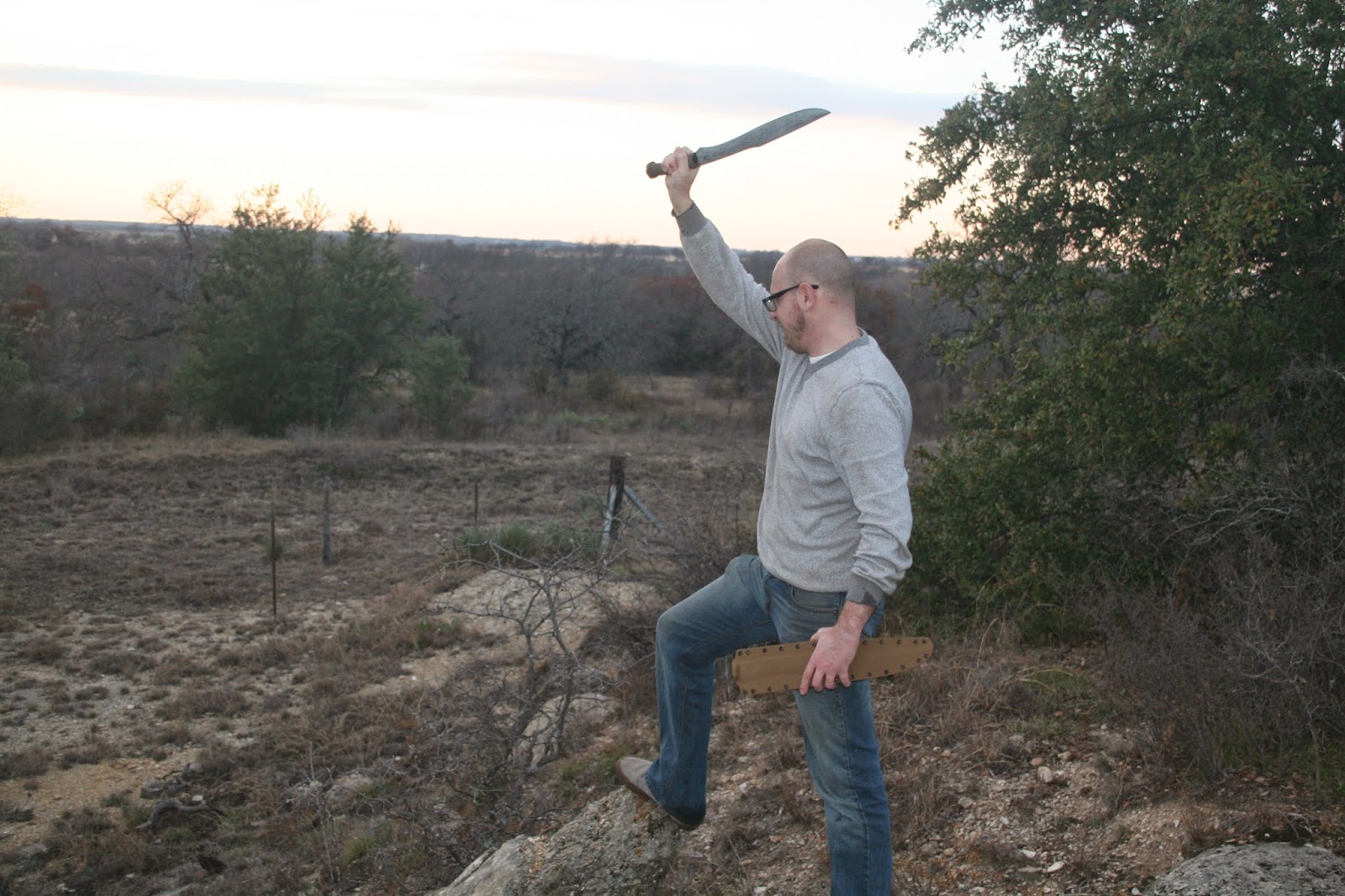 Blade is approximately 16", steel is 5160, handle is an integral socket with marine-epoxy-impregnated paracord.

Visitors to the shop

Upon occasion I have folks come by the shop and visit.  This is the first time that they've originated from another country.  These fellows come from Australia, though some are now in the U.S.  The two in the middle wearing sunglasses are brothers, both veterans of the Australian Army.  The one holding the knife now lives in Texas and works in law enforcement. 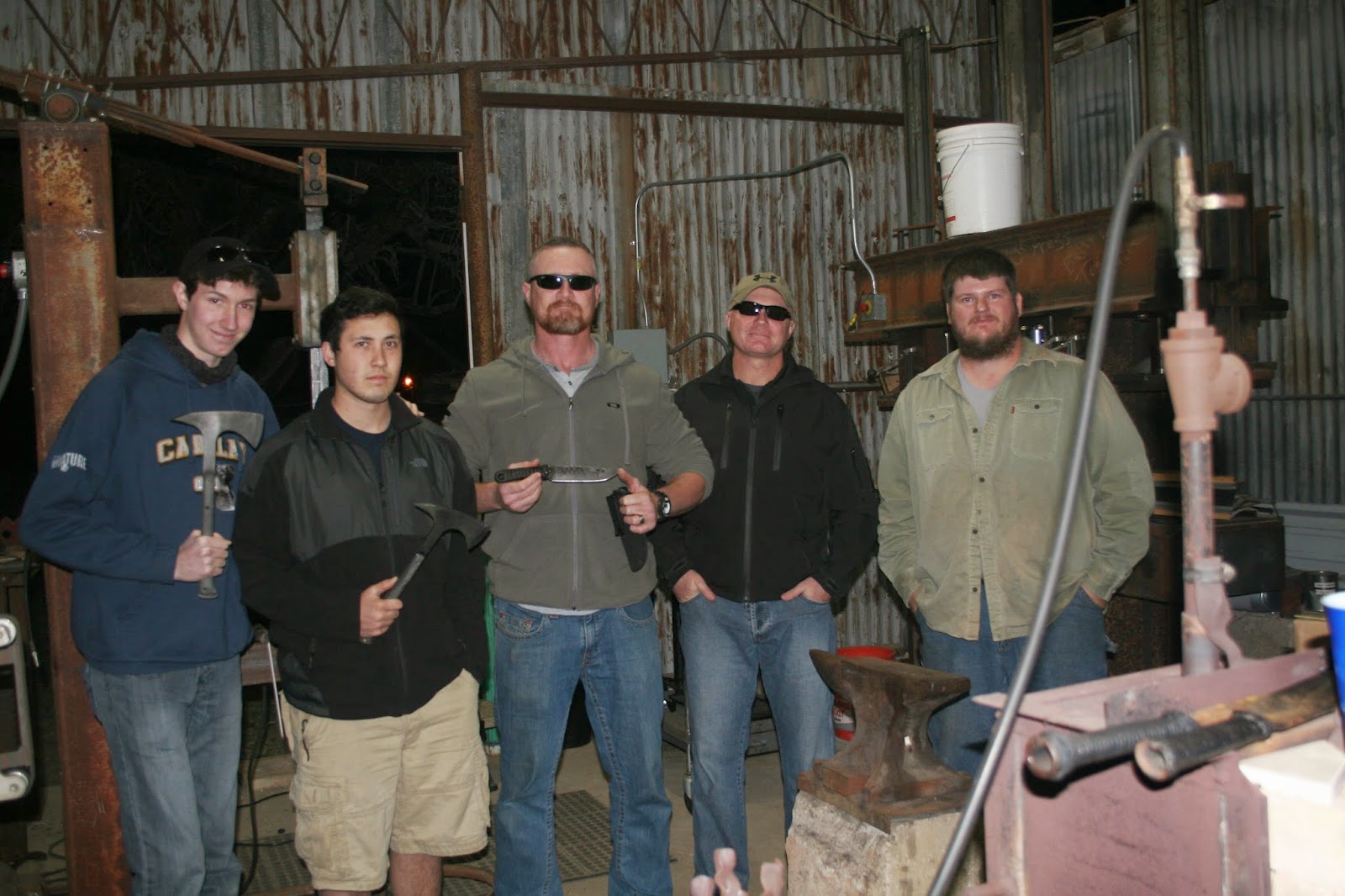 They were hoping I'd have some blades for sale on hand, though pretty much everything I have at the shop at the moment are commissions for customers.  There was one knife in 80CrV2 with a leather and paracord wrap that I had discovered had a slight waver to the bevel and set aside to maybe fix later.  He pretty much insisted that I sell it to him, and since he stood taller'n me and was there with his gang, I agreed to sell it at a discount.  :D 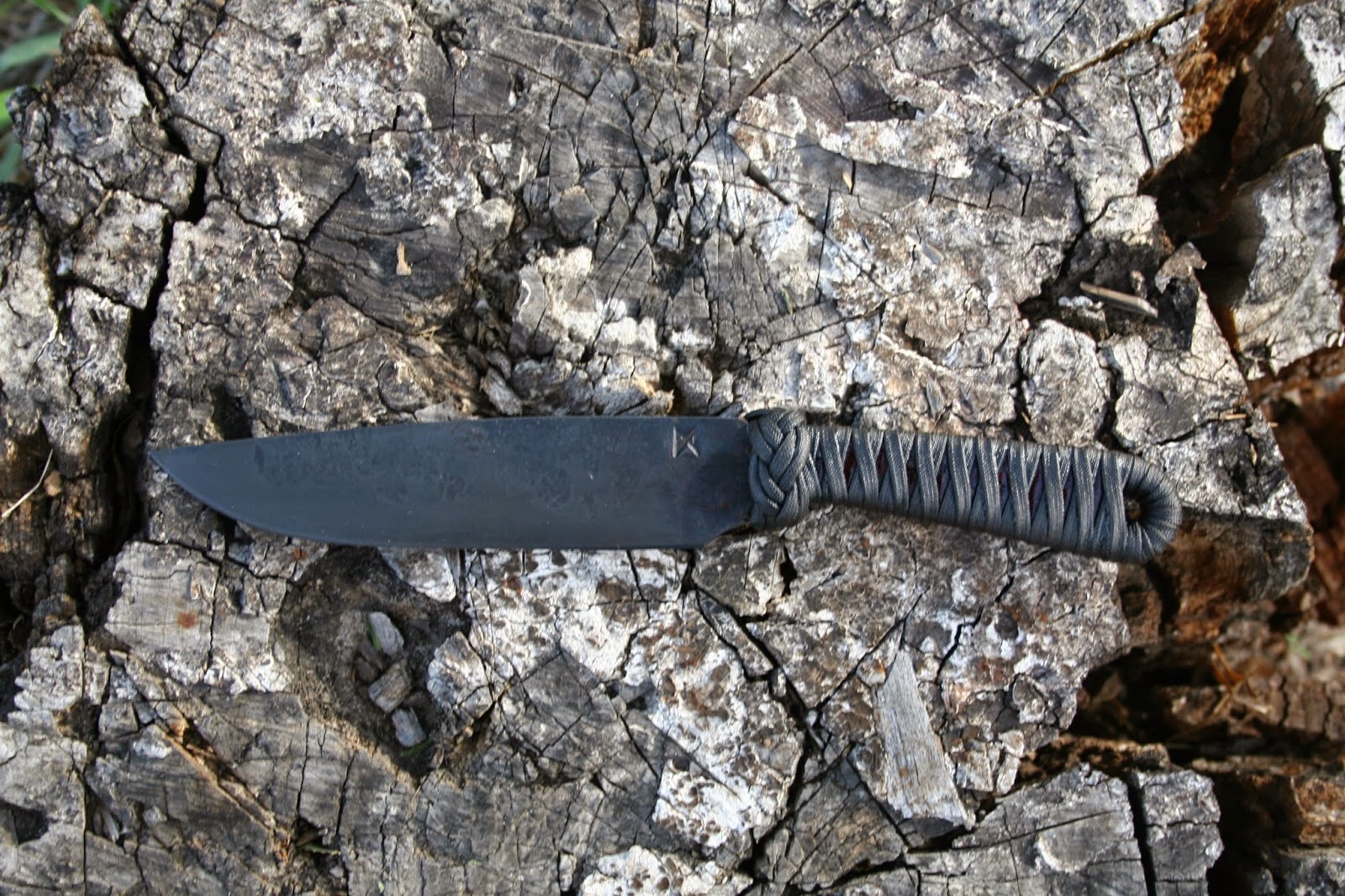 They hung around and played with my new shop cat and tested out my demonstration tomahawks on the old clothes dryer while I built a Kydex sheath for the knife and gave it its final edge.  In amongst such was a lot of good conversation ranging from V8 utes to my usage of the compound contraction "y'all're" in a text message with him.

Also, if you look to the right in the first picture, you can see that I'm growing a beard!  :)