This ax was commissioned after the customer saw the one I had made for myself. I'd say it rides the border of being a tomahawk, which is appropriate. 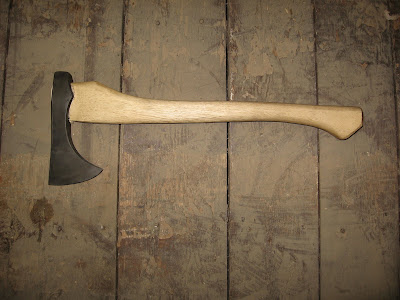 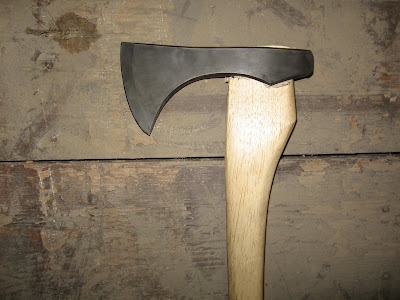 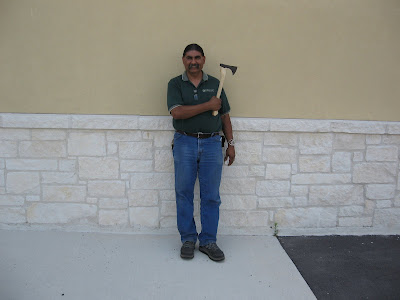 Hamming it up for the camera. :) 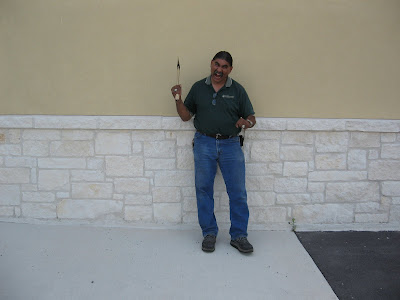 Posted by Helm Enterprises, Forging Division at 11:01 AM No comments:

This one is on its way to the customer. Its overall length is about 17.5", with a cutting edge just under 3" wide, and the inner curve of the beard sharpened. Head forged from 1" square 4140, etched in vinegar after heat treatment to darken it, handle is hickory. 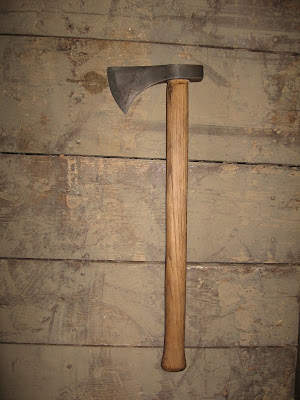 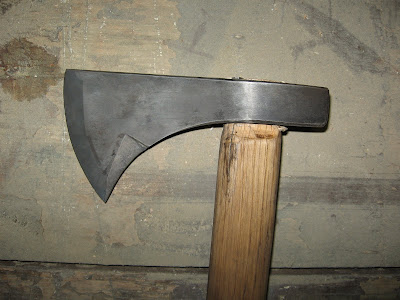 Posted by Helm Enterprises, Forging Division at 10:19 AM 2 comments:

Anyone near San Antonio, TX this Saturday, the June Balcones Forge meeting will be at my shop. Details here:

Hope to see you there!
Posted by Helm Enterprises, Forging Division at 8:24 PM No comments:

Blades for The End of the World

While a lot of knife makers have been getting ready for the Blade Show in Atlanta, I've been flogging to get stuff ready for The End of the World...primitive skills gathering in Idaho, put on by Ron and Karen Hood's Hoodlums forum. :D I was not able to attend myself, but Luke Swenson offered to take up there whatever I was able to make and take care of sales for me. Luke left early, so Ghostwolf, Charlie of Two Wolves Outdoor supply, generously offered to take my inventory up for me. Much appreciation for these fellows! I really enjoyed getting to meet Charlie briefly and chat with him a bit.

Here's what I was able to get together:

1.) Six socket-handled big blades. These are all forged from leaf spring, multiple hardened in veggie oil and given multiple tempering cycles. Handles are hemp cord wrap with cotton cord Turk's head knots and amber or black shellac sealer. Each one has a handle long enough that, in conjunction with the large choil, one can use it for a two-handed swing, or at least hand-and-a-half if you have gorilla paws like mine. Four of these are almost willow-leaf saber profiles, and I would consider them more of a bush sword than a machete. The other two are Southeast Asian style blunt-ended choppers. 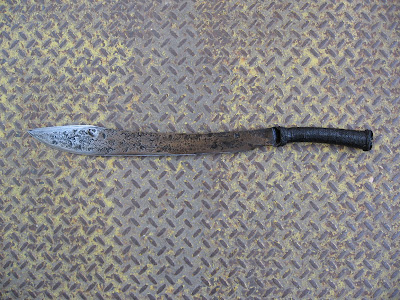 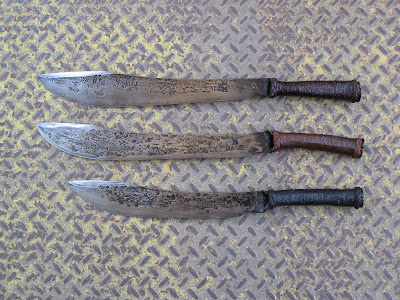 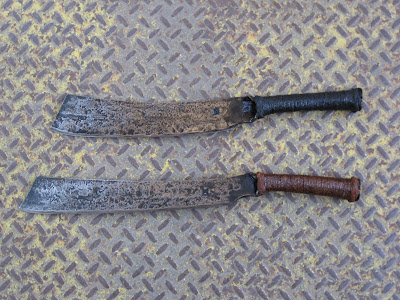 2.) Six axes. These are forged from brand new 4140 and hardened in commercial quench oil. After heat treatment, I brushed off the loose scale and gave them a light etch in vinegar to darken them. The three on the longer handles all have heads just under 20 ounces, while those on the shorter handles have heads 16-17 ounces. I bought a dozen commercial hickory handles of each size, only to discover when they arrived that they were overly massive and even with my large hands were very uncomfortable. It felt like trying to hold a tree trunk! So each handle was carefully cut down, ground, rasped, and sanded to probably about half of their original mass, leaving comfortable, ergonomic shapes that are still plenty strong. The profiles of the handles were also changed, ending up looking quite a bit different than what I purchased, and thankfully feeling a lot different as well. They were given a light stain and oiled. 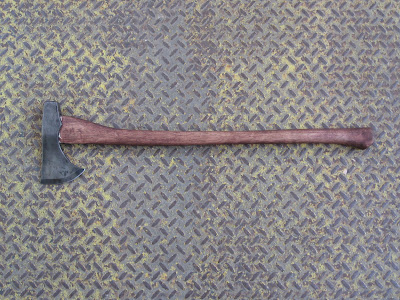 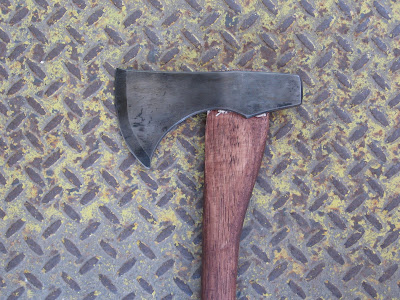 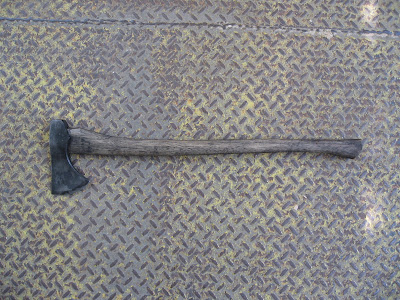 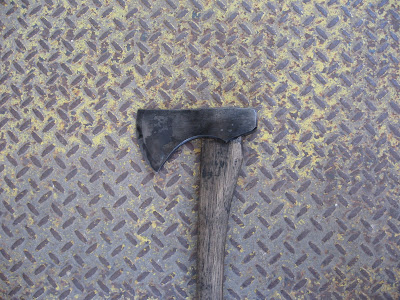 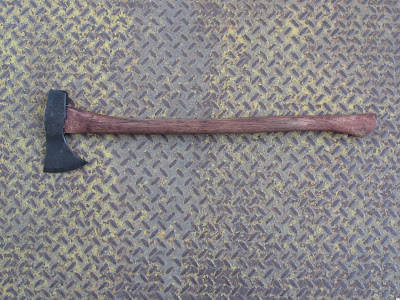 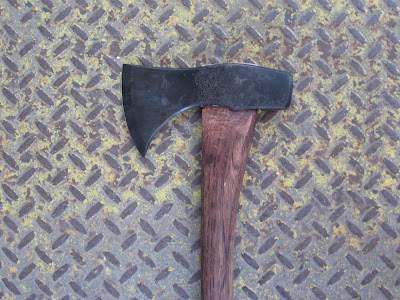 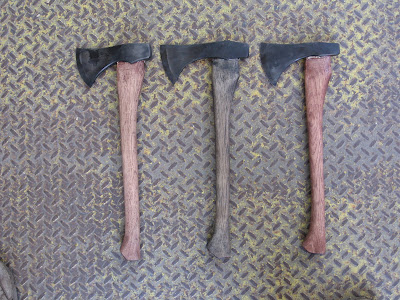 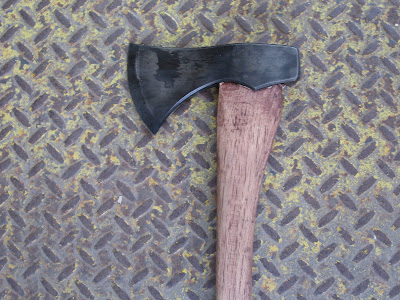 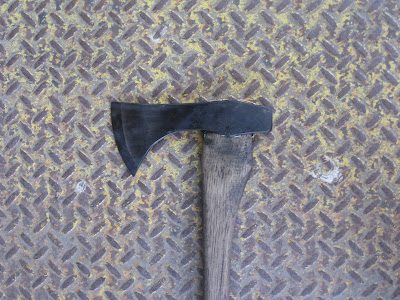 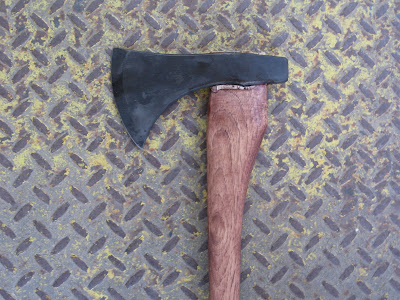 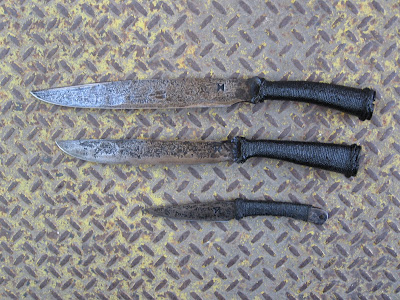 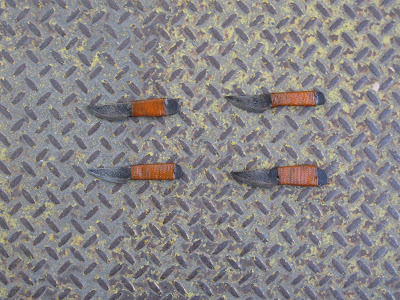 5.) Small game gigs. Made from agricultural coil spring, hardened in veggie oil. You can lash it to a pole to gig fish, frogs, squirrels, etc., and the blade is large enough and sharp enough to process the critter aftewards. 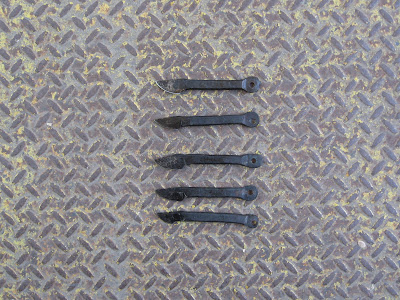 6.) A sharp-nosed mouse. Little two-finger skinner with a nose, ears, and a tail. :) Made from plow disk, hardened in veggie oil, hemp cord and shellac wrap, Kydex sheath. 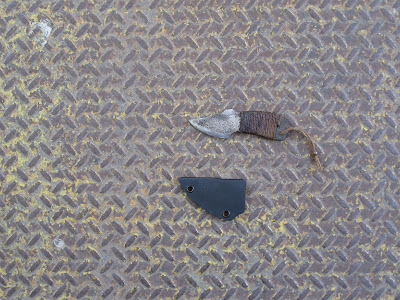 And finally, the reusable crate I had made to transport it in. I based it loosely off an old rocket box I have, but scaled up. There's a small chamber on one end to keep the small stuff in. I need to stencil "Helm Enterprises, Forging Division" across the front now. 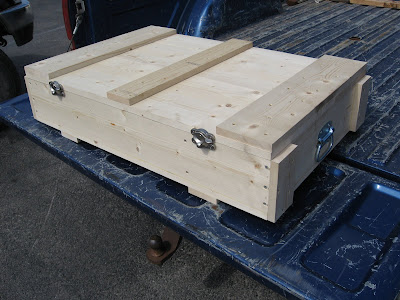 And now, being very tired, I shall sleep. :D Thanks again to Luke and Charlie for their help!
Posted by Helm Enterprises, Forging Division at 10:01 PM 1 comment:

I just completed this knife for a customer and it's ready for knifemaker Luke Swenson to make a sheath for it. This is a reproduction of the Caiaphas Ham knife that hangs on the wall of the Long Barracks at the Alamo, just a couple of miles or so from my shop. Ham was a friend of the Bowie brothers, and was given this knife by the knife nut of the family, Jim's brother Rezin. No one knows for certain what the knife used by Jim Bowie in the Sandbar Fight looked like, but the description given (guardless butcher knife made from an old file, overall length no more than 12 inches) seems to match fairly dead-on with the Ham Bowie, leading me to speculate that there is a slim chance that the Ham Bowie and the Sandbar Fight Bowie may well be one and the same. I don't know if anyone else holds this theory, though.

The customer wanted the knife not only for its historical interest, but because he recognized the value of its shape in processing out game. 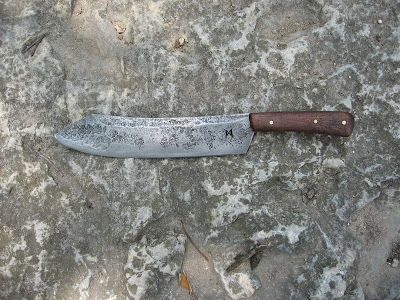 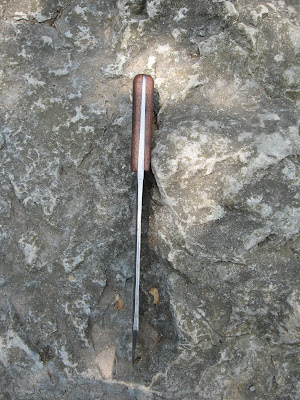 There is a good picture of the original on page 79 of the June 2011 issue of Blade magazine, showing both a profile view and a good view of the spine, showing how it is pinched in and how the tang tapers. I had it open while working on the knife in order to get as close to the original's shape as I could. I also had a picture that the customer sent me and some basic dimensions graciously provided by one of the Alamo's upper curators.

This reproduction is forged from 5160 spring steel, filed by hand, differentially hardened in vegetable oil, and given multiple tempering cycles. The handle slabs are mesquite, with brass pins offset like the original. This was actually the first slab handle I have done! The blade shaves hair quite nicely.

Although I tried to get as close to the original as I reasonably could, I'm sure Luke will be making a much better sheath than the original. :)
Posted by Helm Enterprises, Forging Division at 2:31 PM No comments:

Putting my blades to work

I've been helping clear some brush lately. It's something that I've done since I was a kid around the family farm, so I have plenty of experience in how to cut the stuff. This time was unique for me, though. All of the tools used were ones I had custom made: an ax, a machete, and a Southeast Asian-style blunt-ended chopper (similar to the Rambo IV knife but better made than the officially liscensed product). The brush was pretty thick, a mix of mountain cedar, wild persimmon, some kind of whippy bushes that spread all over, and briars, narture's barbed wire. I spent a solid six hours working at it all by myself, and I covered more ground than I ever have before while clearing brush. I went through about three canteens of water and twice broke the ax handle because I overstruck.

I am really pleased with how my tools performed. They worked better than any of the commercially made axes or machetes that I've used for the same kind of task. Held good edges, and the ax survived accidentally splitting several good-sized rocks with minimal chipping to the edge.

Here's footage I shot afterwards. Not sure if it gives a good idea of how much area this entailed or not, but it was quite a bit for one man to do in less than a full day.

Posted by Helm Enterprises, Forging Division at 1:26 PM No comments: