This past weekend, we had an informal, yet large, gathering of knifemakers and folks interested in knives at my shop.  There were demos, Forged in Fire contestants, outlaw cutting competition, material sales, camaraderie, and some of the most talented knifemakers from across Texas.  It was fun.  :)

Here's a video from Chris Thorn at DropForged Survival that captured part of the day:

This Bowie was commissioned by a customer who saw a similar one I had done last year.  I had traced it out, so I used that to make a pattern, but tweaked on it a bit.  It has a wider handle, which I like better.

The steel is 1/4" 80CrV2 steel, with TeroTuf handle scales and flared stainless steel tube rivets.  The top bevel is a false edge. 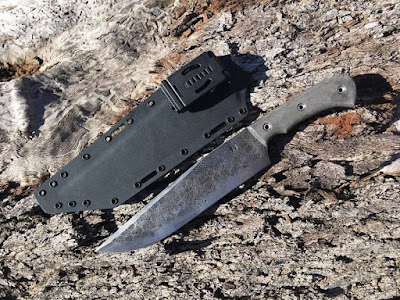 I played with the Kydex also, bringing it up onto the handle more than I usually do.  It's fitted with a Combat Loop for belt carry. 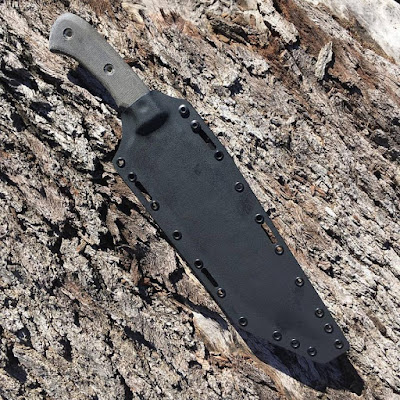 It's a sizeable sucker, with a blade that's 10 7/8" from point to choil and an overall length just under 16 1/2".  Balance point is about at the touchmark. 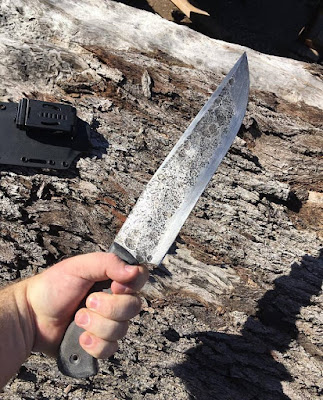 Thought I had already posted this.

The mesquite had been seasoning after blowing down in a wind storm just before the Blade Show, and was hard enough that each blow echoed from the surroundings.

Posted by Helm Enterprises, Forging Division at 8:45 PM No comments:

Chris Thorn of the YouTube channel Drop Forged Survival has been doing a series of videos featuring the (fairly numerous) custom knifemakers around south Texas, including my buddy Tobin Nieto making and testing a seax with an elk leg bone handle.

Chris also filmed me making a bush sword, as well as some cutting tests.  I had a commission from a soldier for a bush sword with a sharpened top edge, so I built one for him and one for the video at the same time.  After filming, the test blade got bought by a repeat customer at a discount.  Winners all around.  :D

These bush swords are the two closest to each other that I've ever made.  Both have 16 1/2" blades forged from 80CrV2 steel, fully sharpened top edges that shave hair, integral socket handles wrapped in epoxy-impregnated paracord, and Kydex sheaths. 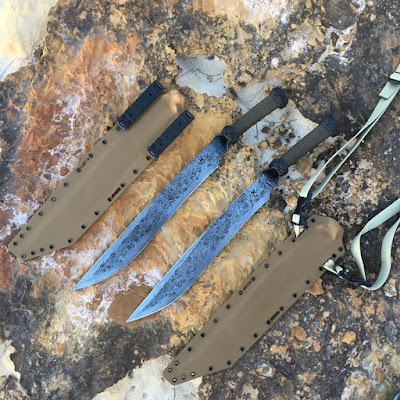 The soldier's rig got set up with a double-adjustable quick-detachable shoulder sling, while the test rig got a pair of MOLLE locks. 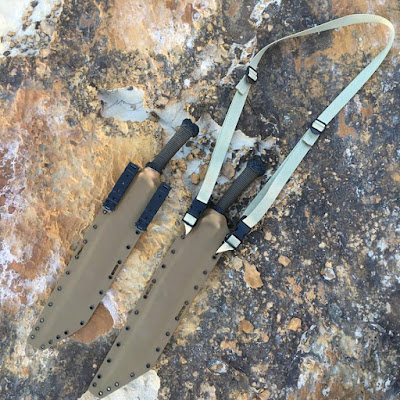 The test blade did some water jug and coconut cutting as seen in the video below, then was put to real work chopping seasoned mesquite (which is part of the intended use of the other bush sword).  The mesquite chopping will be featured in an upcoming video. 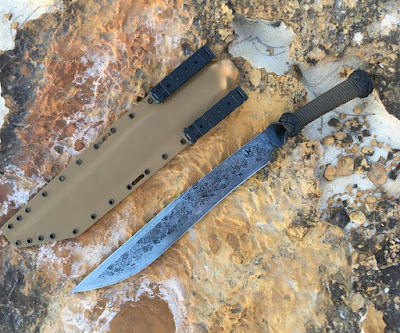 Watching the video really drives home to me how much work goes into making a bush sword.  And I'm the guy making 'em!  :D